The Biggest Threat To the Economy Right Now

On the heels of an “inverted yield curve” last week — historically an omen of an approaching recession — the president says there’s no recession in sight.

So back to the president: "I don't think we're having a recession,” he told reporters yesterday. “We're doing tremendously well, our consumers are rich, I gave a tremendous tax cut and they're loaded up with money.”

Whatever. Really, what else is he supposed to say? As we mentioned on Friday, this president finds himself in the strange position of praying the Federal Reserve can keep inflating the “big, fat, ugly bubble” he was denouncing on the campaign trail in 2016 — at least long enough to ensure his reelection in 2020.

And who knows? The Fed might get lucky and pull it off.

But when his top economic adviser Larry Kudlow says the same thing? Yikes, batten down the hatches. From a New York Post story…

Americans, he said, “should not be afraid of optimism,” saying the “Trump pro-growth program” is succeeding.

Nothing, other than Kudlow’s appalling track record for economic prognostication — especially when it comes to the onset of recessions.

As a columnist and cable TV pundit in 2005, Kudlow denounced “all the bubbleheads” who said housing prices in hotspots like Vegas and Naples, Florida, were unsustainable. (That was the same year future Fed chairman Ben Bernanke said, “We’ve never had a decline in house prices on a nationwide basis.” Good company, huh?)

But an even more damning quotation comes from December 2007: “The recession debate is over. It’s not gonna happen. Time to move on… The Bush boom is alive and well.”

It turned out December 2007 marked the “official” start of the worst recession in decades. Bonus points: Three months earlier, the Fed had embarked on cutting interest rates for the first time in years. Gee, what was it the Fed did less than a month ago? Hmmm…

One more, from July 2008: “The reality is a possible upturn in the housing trend, and at the very least we are getting a bottom.” Heh… the actual bottom, using the Case-Shiller National Home Price Index as a yardstick, didn’t come until February 2012. 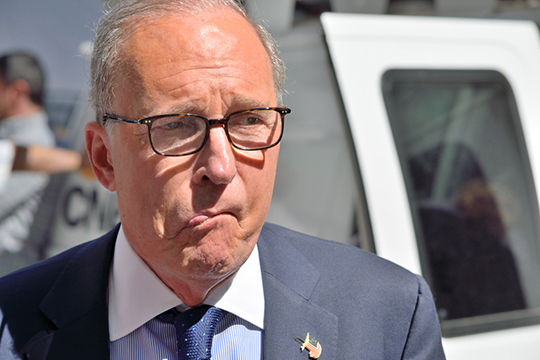 She was Bush 43’s press secretary at the time of Kudlow’s “Bush boom is alive and well” remark. Her signal accomplishment during 16 months on the job was to reveal herself clueless about the Cuban Missile Crisis.

The subject came up in passing during a press briefing one day. "I was panicked a bit because I really don't know about… the Cuban Missile Crisis," she confessed to NPR while she was still holding down the job. "It had to do with Cuba and missiles, I'm pretty sure.

And this is who one of the major networks entrusts to ask the “tough questions” on a Sunday morning show. Oy…]

“The financial system is more highly levered today than it was prior to the last financial crisis,” says the aforementioned Nomi Prins — who’s doing nothing to make us feel better this morning.

“When you add the debt of smaller firms and other businesses not listed on the stock exchanges, you’re looking at another $5.5 trillion or so. When you add it all up, that means, total corporate debt is about $15.5 trillion, or nearly 75% of GDP.”

The Federal Reserve is aware of this huge debt overhang. It’s just helpless to do anything about it.

Says Nomi, “In its 2019 Financial Stability Report, the Fed stressed that ‘the debt loads of businesses are historically high.’”

What’s more, the Fed is also aware of a phenomenon we tipped you off to earlier this year: “CLOs, or collateralized loan obligations, are a Wall Street product stuffed with corporate loans,” says Nomi. “If that sounds familiar to you, there’s a reason. Wall Street is doing exactly what they did with mortgage loans before the 2008 financial crisis, but with corporate ones.

“If the corporate debt bomb detonates, it could make 2008 look like child’s play,” Nomi warns.

“The Fed doesn’t have nearly the amount of ‘dry powder’ it had to fight the last crisis.”

Yep. Interest rates might be too low for cuts to make a difference. And the Fed’s balance sheet might be too big now to get blown up fivefold as it was from 2008–2014.

That’s the bad news. The worse news is that rate cuts and renewed money printing might reinflate the “big, fat, ugly bubble” — only to set us up for an even bigger collapse down the road.

[Ed. note: Crisis now or crisis later? Whichever the answer, you’ll want to build up a nest egg… and one of the best ways to do so is Nomi’s revolutionary new trading strategy, unveiled only a few weeks ago.

The system generates a new trade every week. Nomi walks you through how the system works when you follow this link.]

The “risk on” trade is in full swing as a new week begins. 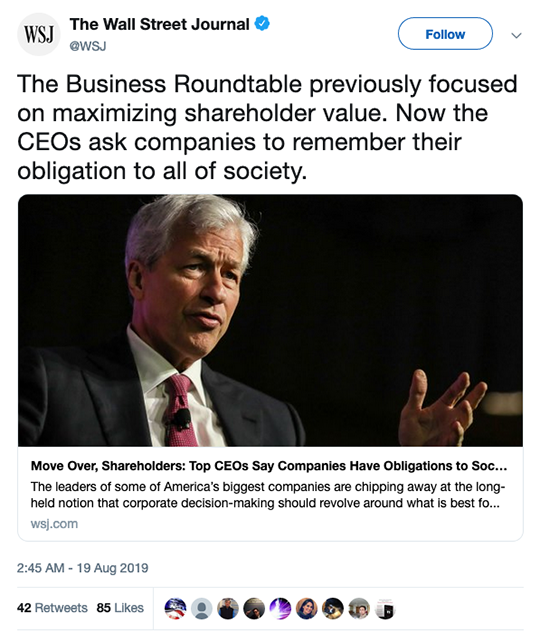 The Business Roundtable is a club made up of America’s top CEOs — led by JPMorgan Chase CEO Jamie Dimon, pictured in that tweet.

In a statement issued today, the group said it is no longer the primary purpose of a corporation to increase shareholder value. Instead, CEOs should take into consideration “all stakeholders” — including employees, customers and society at large. “Each of our stakeholders is essential,” it says.

Under certain circumstances, we would welcome this development. Last year, we described how Harvard Business School has fostered an amoral culture in many corporate boardrooms.

But c’mon. Dimon himself is a product of Harvard Business School and just look at how he’s conducted himself over the years as head of a too-big-to-fail bank.

The statement looks to us like a cynical sop to the more left-leaning Democrats running for president. It might also be insurance against any future flak from Trump; if a downturn materializes, we can easily imagine him lashing out at certain execs for not “doing their part” to “keep America great.”

To the mailbag: “You mentioned both Jack Welch and Bernie Madoff in Thursday’s 5, but you mixed Enron into the discussion and didn’t finish tying off the similarities between the former two.

If GE’s books turn out to be a hairball of fraud — and we’ll allow that’s still a big if — it’s largely because no one of consequence faced criminal charges for the frauds that led up to the Panic of 2008. A lawless culture encourages, well, a lawless culture.

Speaking of which: On Friday The New York Times had a jaw-dropping story. Wells Fargo will close customers’ accounts with no explanation… hand them their money back… but continue to process automated deposits and payments on those accounts. The payments often result in $35 overdraft fees per transaction on an account the customer thinks was closed.

Hey, why not? Nobody paid a criminal price when Wells Fargo was opening accounts for existing customers without their knowledge or consent and then raking maintenance fees from those customers’ other accounts.

“I suspect you didn't go back quite far enough,” writes a Platinum Reserve member after our history of presidents and the business cycle going back to 1980.

“Nixon pressured the Fed to keep rates low to goose the economy and help his reelection prospects in '72. It worked, and he was reelected, but when the economy turned down after the election, his popularity plummeted, and he resigned rather than face conviction on his impeachment charges over Watergate.

“As things stand now, if the economy stays at least OK, Trump has a good shot at reelection, but I would hate to see a replay of the Nixon debacle. I was in college at the time, and it was an ugly experience for the nation. I fear it would be worse if it came around again.”

The 5: We get a kick out of certain “sound money” advocates who twist themselves into intellectual pretzels these days — starting with most of the people floated this year as potential Trump nominees to the Fed’s Board of Governors.

They give lip service to a gold standard, but they also caution the Fed must open the monetary spigots now to fight deflationary forces.

The agenda is so patently obvious: “I want sound money, but not yet because we have to get Trump reelected first.” Gotta keep that big, fat, ugly bubble inflated.

So yes, the parallels to 1972 are quite relevant. Nixon leaned hard on the hapless Fed chairman Arthur Burns to print money to lock in his reelection. The idea was that after the election, the dollar could be re-linked to gold, albeit at a higher price than the $35 an ounce figure when Nixon closed the gold window in ‘71.

The rest is history: Nixon won 49 states in ‘72, but the dollar-gold link was never reestablished. Meanwhile, Burns’ money printing set us up for the near-runaway inflation of the Carter years.

No guarantees of a replay this time, but it’s a live possibility for sure.

P.S. Do you have 30 minutes to spare at the start of each new week?

A small group of people have had their eyes opened to a startling new strategy — in which 30 minutes is all it takes to pocket thousands of dollars every week. Learn how it works right here; the link will remain “live” from now through the market open tomorrow morning.