The Canadian company announced earnings last Wednesday… and the report was a true earnings miss, stymieing consensus opinion. Ray says: “No one expected the top-line numbers to be this disappointing.”

Just how disappointing? “Overall losses came in at C$1.28 billion. The kicker is C$1.2 billion of these losses stem from CGC’s deal with Constellation in the form of extinguishing warrants,” says Ray.

As for earnings per share, another tremendous miss, logging in at negative $3.70 even as the consensus estimate was for a loss of 42 cents per share. Add to that, a total revenue miss over 18%.

The execs at Canopy Growth probably needed to “sample the wares” last Wednesday, if you catch our drift.

“CGC’s earnings report proves one thing at least,” says Ray. “Long gone are the days when you could throw a dart and land on a pot stock opportunity.

“Fundamentals matter a lot more today.” he continues. “Investors are not going to endure heavy losses for such sustained periods solely on the ‘green rush’ hype. They need to see profits, or at least good reasons for acquiring debt.”

Ray says: “Many large pot companies are reportedly overpaying for acquisitions, be it other companies, property or licenses.”

So considering dismal earnings, is marijuana giant Canopy Growth dead in the water?

Ray says not so much; in fact, on closer inspection, “The main reason for Canopy’s large quarterly loss isn’t due to operations but to [that] noncash charge of $1.2 billion.

“This charge… is related to Constellation brand’s multibillion-dollar investment in CGC and CGC’s own buyout option with American cannabis company Acreage Holdings Inc.”

And one thing’s certain, “Sales of straight cannabis products were up an awesome 94% quarter over quarter,” says Ray. “Therefore, the quarterly decline in gross revenues at CGC isn’t due to dried cannabis.”

In further proof CGC’s gearing up for a comeback, Ray says: “Even the ousted Linton likes CGC at current prices.”

On Thursday after stock plummeted 14% on earnings news, Linton loaded up on an unspecified number of CGC shares telling Bloomberg, “Yes, I have bought on this August sale,” further indicating he’s “watching the dips.”

Ray concludes: “Linton is the ultimate CGC and cannabis insider, and if he sees a big buying opportunity in the cannabis company he helped build from scratch, perhaps you should too.”

While Canopy Growth is a litmus test for what’s happening in fully marijuana-legal Canada, closer to home…

“The National Institute on Drug Abuse has announced plans to expand its marijuana research objectives beyond the health effects of smoking pot,” says an article at Reason.

In a public notice Wednesday (yeah… the same day CGC released earnings), the agency says it’s looking to fund research on topics including the “initiation and continued use of marijuana for therapeutic purposes” and “how cannabis industry practices, including research on marketing, taxes and prices, impact use and health outcomes.”

On the news, Marijuana Moment highlighted the agency’s announcement is “one of the latest signs that the federal government is recognizing the reality of the marijuana legalization movement’s continued success.”

“Expanding research into marijuana’s uses is good,” says Reason. “Even better would be for the Drug Enforcement Administration to stop blocking efforts to grow pot for research purposes.”

To wit: “The U.S. Court of Appeals for the District of Columbia Circuit has ordered the DEA to explain why it has yet to respond to nearly two dozen researchers around the U.S. who applied three years ago for a DEA license to grow research cannabis.”

The lawsuit includes physician and researcher Sue Sisley of the Scottsdale Research Institute, a lab that applied for a DEA license to grow medical marijuana to study therapeutic effects on veterans afflicted with PTSD. That was back in 2016. Since? Crickets.

Well… scratch that. Mostly crickets. Sisley and her team at SRI did receive research marijuana from the DEA, presumably from the only federally sanctioned marijuana in the country, grown on a 12-acre plot at the University of Mississippi.

According to the lawsuit, the marijuana “arrived in powdered form, tainted with extraneous material like sticks and seeds, and many samples were moldy.” In short: “not suited for any clinical trials, let alone the ones SRI is doing.”

[Ed. note: You’re watching history in the making as the U.S. steadily embraces the marijuana industry.

And even though the Marijuana Index has been all over the place recently — and what market hasn’t been? — opportunity’s still knocking.

Ready to seize the opportunity? Make sure to move on this TOMORROW before midnight.

Then? Get ready for big wins ahead by clicking here.]

“The market finally marched higher with a little pep in its step on Monday,” says Agora analyst Greg Guenthner, “building on Friday’s gains and helping the Dow and S&P 500 push to their third-straight day of gains.”

That’s not to say the market’s out of the woods yet — in particular, the S&P 500 index that “must contend with its 50-day moving average, which just so happens to be where the large-cap index failed to rally earlier this month. 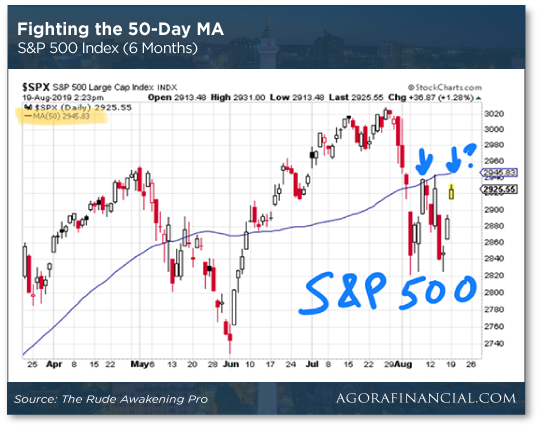 “I’m not ready to get too bullish just yet,” says Greg. “August has been a difficult, volatile month for stocks. Let’s just see if we can make it to Labor Day without any new catastrophes popping up…” he says with a forward note of skepticism.

“Don’t panic,” say our income specialist Zach Scheidt. “That’s my advice to you now that a reliable market indicator is signaling an impending recession.”

Beyond a doubt, Zach’s talking about the portentous 2/10 yield curve inversion that appeared last week. And he’s not insisting there’s no cause for concern either.

“Signs of financial trouble are popping up all over the world,” Zach says. “Wall Street is particularly worried about the bond market.”

So “When investors and institutions pile into bonds, it can be a signal that all heck is about to break loose,” Zach says.

“The way to monitor this is through the bonds’ yield,” he continues. “When you buy a bond, you know exactly when your investment will pay off. And you know exactly how much money you will get back in return. Those numbers are essentially fixed unless something dire happens.”

What isn’t fixed is the price investors will pay for a bond — that’s a product of good ol’ supply and demand.

“That’s essentially what’s happening in the bond market right now… only to a frightening degree.”

“In some areas of the world, demand for safe bonds has pushed yields to extreme lows,” says Zach.

“A surprisingly large number of bonds even have negative yields — meaning investors are automatically accepting the fact that they will lose money on the bonds.”

The reasons why institutions and investors buy bonds with negative yields are convoluted. “But it obviously spells trouble for their bottom line.

“And what has Wall Street really spooked is the situation with U.S. government bonds,” Zach continues.

“U.S. government bonds are considered the safest bonds anyone can buy.” The yields for U.S. Treasuries have fallen — sure — but the good news? They still have positive yields, meaning investors can still expect a return.

“Ordinarily, though, yields for longer-term U.S. bonds are higher than they are for shorter-term bonds,” says Zach. “Essentially, the longer the U.S. government will hold investors’ money, the more investors want to get paid in return.”

That’s where the yield inversion comes into play: “It indicates that investors are very pessimistic about the market’s near future,” says Zach.

“This has only happened a handful of times in the past 50 years. And each time, the U.S. economy sank into a recession afterward.” 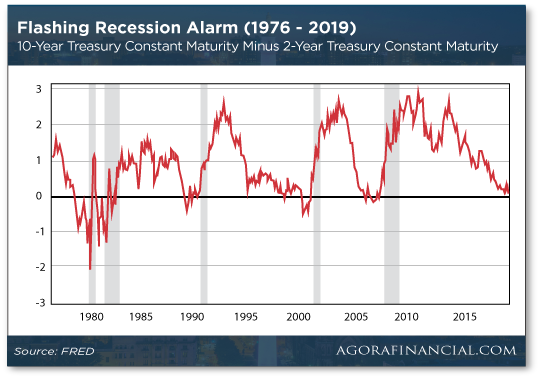 How long after? According to Bank of America Merrill Lynch, since 1956, recessions have commenced — on average — about 15 months after an inversion of the 2-year/10-year spread.

“The good news is that we have some time,” says Zach Scheidt. “So there’s no reason to rush thinking things through.”

As you’re aware, Zach’s a big proponent of stuffing portfolios with sound, dividend-generating stocks. “The panic may cause their stock prices to fall, but they’ll keep chugging along and earning revenue — paying… along the way.”

To Zach’s way of thinking, in the event of a recession: “The key question won’t be how far a stock will fall but whether… dividend payments are secure.”

Is the price of high-end Japanese whisky a harbinger of recession? A Wells Fargo economist thinks so… 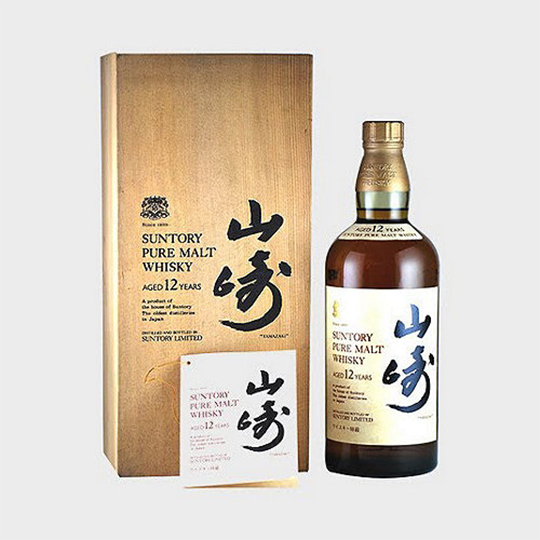 PROOF we’re in the late-boom phase of the boom-bust cycle?

Not least of which, the mounting price of trendy liquor. “DeKaser observed that in Washington, D.C., the cost of Suntory’s Hibiki and the higher-end Yamazaki has risen.”

“Chichibu, another brand of Japanese whisky, sold 416 bottles five seconds after it was available online.”

Anecdotal evidence? You betcha. Prepping for the bust cycle with whisky? Not the worst idea ever… but we’re certain there are more affordable alternatives.

If you’ve followed Agora’s work for any time now…

Then you need to see Ray Blanco’s new presentation.

It might change how you look at our company forever.