In the last decade, we’ve become so accustomed to seeing headlines like these…

[Yes, I had a stronger word in mind than “fouled.” But this is a PG-rated e-letter.]

Every year on the fourth Friday of August, the chair of the Federal Reserve delivers a speech to fellow central bankers at a gathering in Jackson Hole, Wyoming.

There was a time when this speech was a nonevent, something you’d find on Page A6 of the following Monday’s Wall Street Journal, before the Journal started publishing a Saturday edition.

From December 2008 through March 2010, the Fed undertook its first round of “quantitative easing” — in which the Fed bought up Treasury debt and mortgage-backed securities from the too-big-to-fail banks.

Throughout the spring and summer of 2010, Fed chair Ben Bernanke expressed confidence that QE had done its job pulling the markets and the economy back from the brink of ruin.

But the stock market fell out of bed, tumbling nearly 15% in six weeks. And the economic numbers were turning back down.

It was at the Jackson Hole speech in 2010 that Bernanke declared an about-face and announced “QE2.” Jackson Hole has been a thing ever since.

But it’s not just one speech a year. Nowadays, finance pros analyze every belch and wheeze that emanates from every Fed official — desperately seeking clues to future Fed policy.

It wasn’t always like this. A fellow named Ben Hunt says the turning point came in those early years after the Panic of 2008.

When it came to the prices of financial assets, Fed jawboning — indeed, the jawboning by all the globe’s major central banks — began to matter more than traditional metrics like supply and demand, or sales and profits.

As early as the spring of 2009, “I got the glimmer of, OK, I see what's going on now,” he recalls. “It's the use of words and narratives. There are no fundamentals for markets now.”

The knowledge and skills Hunt developed to run a $1 billion hedge fund? They weren’t nearly as useful in this strange new world. Trades that were once surefire winners got blown up by some random remark from a central banker.

By 2012, Mr. Hunt threw up his hands and closed his hedge fund, returning his investors’ money. He retreated to a hobby farm in New England and started writing a blog called Epsilon Theory. Today the blog has an underground following within most major financial firms — people like Hunt who remember when fundamentals still mattered and who want to make sense of this truly fouled-up world.

The Fed purposely cultivated this obsession — not realizing how it would backfire.

As Hunt explained it in a recent interview on the Hidden Forces podcast hosted by our acquaintance Demetri Kofinas, “It's not an accident that every week you have a couple of Fed governors who have interviews on CNBC or the Journal or something. The schedule is planned…

“It is the intentional use of words, not as an indication of what internal belief is, but the use of words to try to change other people's behavior… The words are carefully chosen and then carefully promulgated and distributed in order to achieve some sort of effect in investor behavior.”

Hunt’s remarks jibe with something we usually say when the Fed issues the minutes from its every-six-weeks meetings. Fed “minutes” aren’t like the minutes from your local school board. They’re not an objective record of who said what. They’re a political document carefully crafted to achieve a certain response.

In his last speech as Fed chairman in 2014, Bernanke fessed up that the whole thing had become, in Hunt’s words, “a Frankenstein’s monster.”

“They started this off to try to channel or push investor behavior in a certain direction. They are now prisoners, literally prisoners of their own words.”

This is the truly fouled-up world in which we live now.

We don’t like it, but we have to live with it. God knows it makes our jobs as publishers and editors more difficult.

But you’ve entrusted us with a major responsibility — to furnish ideas to help you preserve and grow your wealth — and we take that responsibility seriously. If central bankers are going to muck it up, well, we just have to buckle down and work that much harder on your behalf. Which we’ll do.

As it turns out, Fed chair Jerome Powell’s Jackson Hole speech today was mealy-mouthed — designed not to serve up new clues or generate a strong response.

He said the U.S. economy is still doing all right but faces “significant risks” — especially from the trade war. The Fed stands ready to provide “stimulus” if needed, but there’s no “rulebook” and the Fed will simply “act as appropriate” to keep the economy steady.

Yawn… stretch. It’s literally nothing we haven’t heard the last several weeks. After analyzing the speech, futures traders concluded there’s still a 95% chance the Fed will cut the fed funds rate a quarter-percentage point next month… and a 5% chance of a half-percentage point. No one thinks the Fed will stand pat, which is a slight change from yesterday.

(Just think about it: Day to day now we’re analyzing the probabilities for rate cuts. Truly fouled up.)

The Dow, the S&P 500 and the Nasdaq are all in the green, but just barely. There was a blip of drama this morning when China announced new tariffs on $75 billion in U.S. goods, but all that means is that China has more or less run out of U.S. goods on which to impose tariffs now.

However, China also announced an extra 5% tariff on U.S. crude oil… and that’s sent the price of West Texas Intermediate down to $54.26 a barrel, the lowest in more than a week.

“The 800-pound gorilla in the autonomous driving space is China,” reports our science and wealth maven Ray Blanco — on site at the Autonomous Vehicles 2019 conference in Detroit.

“China is making a lot of strides in the AV space,” says Ray. “Honestly speaking, they're doing good work, making advances and innovations.

“But… one of the biggest needs to push driverless cars from proof-of-concept to actual production models is platform standardization. And the type of platform Chinese software engineers develop could impact the path of AV development significantly. The concern is that this could lead to vulnerabilities in AV software that could result in accidents and death.”

Ray sat in on a talk by Patrick Wilson, director of the Office of Business Liaison for the U.S. Commerce Department.

“According to Mr. Wilson it is imperative the Trump administration continue to work with China to develop proper safety protocols and ensure potential vulnerabilities are accounted for and eliminated well before mass production begins.

“The good news, straight from the U.S. Department of Commerce itself, is that Trump and his administration have made AVs one of their highest priorities in terms of new trade initiatives.”

“Great article!” reads the first of several reactions to our in-depth take yesterday on gold manipulation.

“Hard to believe this is happening.”

“Dave, my view on manipulation of markets has evolved over the years as well,” says one of our regulars.

“Banksters and other ‘market makers’ don’t just manipulate the system. They are the system.

“It’s we who are being manipulated. Price suppression, fixing and rigging seem to be business as usual.

“Yes, eventually the manipulations will overcorrect and go ballistic. But price discovery is distorted so badly for so long that investor behavior gets perverted all over the place. You can be held underwater way longer than you can hold your breath — and abnormal becomes the new normal.

“As you pointed out, the front-line traders who get busted for crimes like spoofing are fall guys in a bigger scheme. Pawns are sacrificed, but the power players never seem to be held accountable.

“It makes perfect sense to me that gold is being manipulated as well as any other metal that the elite can make an illegal profit on,” chimes in one of our most longtime readers (going almost back to the beginning in 2007!).

“The name of the game is making a profit by any means necessary and keep the ‘party’ going on for as long as possible until the day of reckoning. When the ‘elite’ figure it's about ready to collapse they just leave the country to somewhere the authorities can't extradite from and live off their ill-gotten gains and let the suckers — meaning the average American who fell for it — pick up the multibillion-dollar tab.

“Why do so many analysts in the Agora family continue to recommend, or have in the past recommended, holding their gold position in the ETF GLD?” a reader inquires

“This isn’t the first time that GLD has been associated with shady practices regarding gold manipulation. It doesn’t own any gold. It may own pieces of paper for gold it has leased, and then leased it again as a short position against gold.

“Hard Assets Alliance is great for physical holdings, but something like PHYS from Sprott, which actually holds audited allocated gold, or OUNZ from Van Eck would both give you exposure to real gold, which you can actually take possession of if conditions are met.

“Additionally, those names aren’t continually associated with stories about gold manipulation against you, the holder.”

But as a trading vehicle, a way to make quick-strike gains with precious metals, it’s hard to beat options on GLD — as some of our editors have recommended this year. And ethically, we have no problem with that.

You’re right about PHYS and OUNZ being better choices than GLD if you want a proxy for precious metals that you can readily buy and sell on the stock exchange.

But we do like Hard Assets Alliance — yes, Agora Financial owns a piece of it, but we liked it before we bought in, too — as the ideal vehicle for physical storage, either in HAA’s own vaults or if you prefer to take delivery.

Just know that if you take delivery, opt for nonbank storage. In the event of a bank holiday, there’s no guarantee you’ll have access to your safe-deposit box. No such thing as too much caution…

P.S. As we go to virtual press, the new Chinese tariffs have prompted a presidential tweet storm, the highlight of which is… 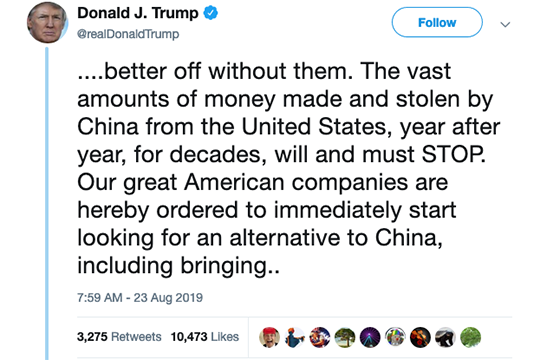 How exactly will that be implemented and enforced?

Supposedly an announcement with details is forthcoming this afternoon. In the meantime, the Dow has tanked 400 points.

Hope you’ve been taking us seriously this year when we said the trade war was nowhere near over. We’ll follow up on Monday.