Breakfast in Silicon Valley (and AI)

“The trade war rules everything around us,” says Agora analyst Greg Guenthner.

Alas, as The 5 was going to virtual press Friday afternoon, Dave added an addendum about a flurry of Trump tweets, including one that had Trump ordering American companies to stop doing business with China.

And with the flick of the tweet toggle, the Dow went into a 600-point tailspin….

Backing up a bit, the impetus for Trump’s outrage came early Friday morning when “the Chinese Finance Ministry announced that it would enact tariffs to the tune of $75 billion on U.S. goods,” says Greg. “The new tariffs will cover 5,000-plus products imported to China.”

“Despite the U.S. decision to delay tariffs on some Chinese goods,” said Gao Feng of China’s Ministry of Commerce, “if the United States rides roughshod over China’s opposition and imposes any new tariffs, China will be forced to adopt retaliatory actions.”

“That was all it took to lure Trump to his Twitter app,” says Greg. Then all bets were off: “Investors started to sell.

“By the closing bell,” he says, “the Dow Jones Industrial Average shed more than 600 points, the S&P 500 closed lower by more than 2.5% and the tech-heavy Nasdaq Composite lost 3% on the day.”

Although — in a rather blatant effort to goose the market this morning — Trump’s abandoned Twitter, telling CNBC: “China called last night… and said ‘let’s get back to the table’ so we will be getting back to the table and I think they want to do something.

“They have been hurt very badly but they understand this is the right thing to do and I have great respect for it,” the president says. “This is a very positive development for the world.”

China, however, takes exception — the global superpower isn’t sitting down at any table…

As the U.S.-China trade war simmers, we revisit something George Gilder said in an Op-Ed piece at The Wall Street Journal: “I believe the trade war Trump is waging with China is an incredible mistake.”

George Gilder’s the best-selling author of Wealth and Poverty, one of the most cogent arguments for capitalism around; not only that, Gilder’s a legendary futurist who predicted the personal computer, the microchip, the internet and more.

And to his way of thinking, the trade war might be less about fair trade and more about technology…

“In Washington, many heavy-breathing fearmongers think that if China takes the lead in AI, it’s all over for the U.S.,” says George.

“These days everyone believes that artificial intelligence (AI) is the big new thing that will change the world and determine the wealth and power of nations.” 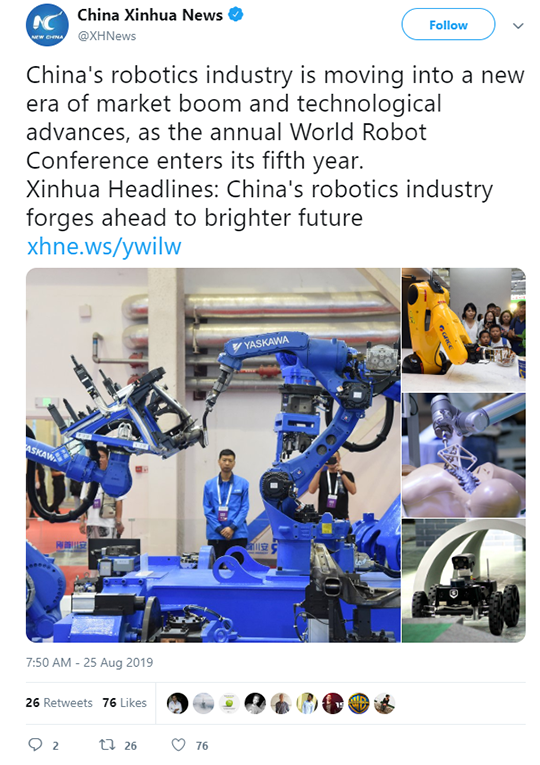 Obviously, China’s making AI a priority… but George’s enthusiasm for artificial intelligence as a game-changing technology comes with a few caveats.

But “[AI] is not creating rivals for the human brain,” he says.

Although “it is easy to imagine a future in which the role of humans steadily shrinks,” says George, “the basic problem with that idea is the misunderstanding of what computers do.

“Computers shuffle symbols. As philosopher Charles Peirce observed more than a century ago the links between computational symbols and their objects are indefinite and changing.

“The links between symbols and objects have to be created by human minds,” says George.

“Programmers have to enforce an interpretive scheme between symbols and objects…”

So if you’ve been imagining a Matrix-like world — complete with robot overlords and job obsolescence — George concludes: “Contrary to popular belief, AI will create jobs rather than destroy them, like all computer technology has done throughout history.”

[Ed. note: George Gilder is a name you might recognize…

He’s been called America’s No. 1 futurist for a reason: He predicted the microchip, personal computing and even the smartphone.

Now he’s come out of retirement to share another surprising prediction with the potential to change the way you shop, bank and communicate online.

Plus: This prophecy has a very good chance to make early investors rich….

And because you’re a reader of The 5, all you need to do to gain access is click here.]

The crypto-loving Winklevoss twins — or “the Winklevii” — are considering backing Facebook’s proposed libra coin. Or at least including libra on their crypto-exchange platform Gemini. (Libra. Gemini. Heh… what’s your sign?)

Surprising, no? Especially after the down-and-dirty legal wranglings between the brothers and Mark Zuckerberg over the origin story of Facebook.

Water under the bridge for the twins, apparently, who walked away from the Facebook settlement with $65 million… some of which they invested in up-and-comer bitcoin. According to the twins, they now own about 1% of all bitcoin.

“Whether or not they do decide to team up with their old rival,” CNN says, “the Winklevoss brothers say libra is a good thing for the industry and a step toward a time when cryptocurrency is ubiquitous…

“Ultimately, the twins don’t think Facebook will be the last big tech company to try to launch a cryptocurrency. Cameron Winklevoss expects every one of the FAANG companies… to get into crypto.”

“‘I think that internet companies have to have a crypto strategy,’ he says, ‘and I think a lot of them are thinking about their own coin projects.

“‘They’re probably watching libra and Facebook to see how that fares as they develop it,’ Cameron Winklevoss said.” (He’s the good-looking one, *wink*.)

Looking at market notes in reverse today, flagship crypto bitcoin’s up $200 to just under $10,300.

“Gold and other gold-related investments are on a massive run this year,” says our income expert Mike Burnick. “There’s no better time than now to grab your stake…”

But, Mike warns, all that glitters… well, you know the rest. So what are the best ways to invest in gold?

“Gold bullion is simply a term for gold bars or gold ingots,” says Mike. He recommends storing it in your at-home safe. (You might recall Dave warned against safe-deposit boxes last week… because, well, WTSHTF.)

“One of the pros of purchasing this hard asset is avoiding large premiums,” he says. “When you buy gold above the spot price, you are buying gold with a higher premium. The spot price is the current price per ounce exchanged on global commodity markets.

“If you want to calculate the premium of your gold bullion, subtract the spot price from the price you are being quoted, divide that by the spot price and multiply by 100.

“The highest premium you should be willing to pay is 10%,” Mike says. “The longer you want to hold onto the gold investment, the closer to the spot price you should try to get.”

“If you’d like to own shares of gold without having to deal with the physical property itself,” Mike says, “gold ETFs are a good place to start.

“A gold exchange-traded fund, or a gold ETF, gives you the opportunity to have gold in your portfolio without worrying about where to hold onto a physical asset.

“Typically, with each share of an ETF that you buy, you possess the equivalent of 10% of an ounce of gold.”

Mike says: “I like gold ETFs because they act as a hedge against disruptions in the economic and political worlds. They also protect against the lowering values of currencies. When the dollar isn’t doing well, gold tends to go up.”

“Mining companies are a great place to allocate your dedicated gold funds.

“When investing in mining companies you want to make sure that you are looking at the quality of the company you are investing in,” says Mike. “Consistently strong production, capable management and reserve growth are good factors for you to keep in mind.

Bottom line: “Gold is a hedge,” says Mike, “and in a volatile market, it’s worth keeping up with.”

“Employees at a Washington state grocery store found $550,000 worth of cocaine hidden in boxes of bananas,” website UPI reports.

“The King County Sheriff’s Office said the employees alerted police, who tested the suspected drugs and confirmed the substance to be 48 pounds of cocaine.” 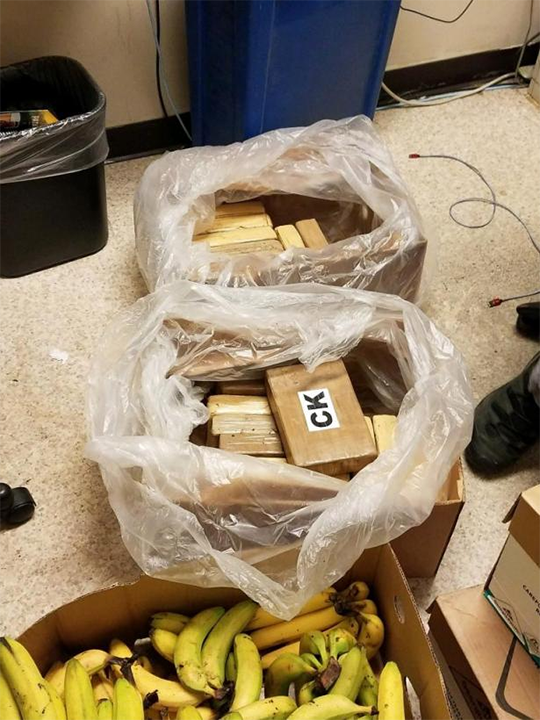 “It’s not unusual to find a spider hiding in a bunch of bananas, but kilos of cocaine?” says the sheriff’s office on Facebook.

“You raised a great question in Friday’s edition of The 5,” says a longtime reader. “Why are the Federal Reserve’s proclamations potentially market-moving?

“I believe the answer is that they have successfully addicted us to debt, along with profligate spending and nonstop deception.

“This raises a bigger question, which you have delved into before (exactly 36 months ago, in fact): Why do we have a central bank at all?

“The short answer is we shouldn’t. This is not just my opinion. America’s Founding Fathers seemed to agree, as is evident in our Constitution.

“Two previous attempts at establishing a central bank in the USA failed, for good reason. But after much scheming, the Fed was foisted upon us — late at night during the holidays — with the Federal Reserve Act of 1913.

“The results have not been good: ongoing currency debasement/inflation, boom-bust cycles, ever bigger government and perpetual taxes and wars.

“So the least they can do is distract us with ‘Fedspeak’ and plenty of jawboning. But it’s smoke and mirrors. Banksters have a long, treacherous history of transferring wealth via unsound fiat money. Yet some folks wonder if they know what they’re doing.

“You’re a good citizen for addressing this stuff!”

The 5: Indeed, he is. Dave wouldn’t like me saying so, but he’s the best kind of citizen — one who’s informed… and actually gives a damn.

By the way, readers, Dave’s on a much-deserved vacation this week. So I’m at the helm…

P.S. George Gilder’s anticipating the advent of an explosive new technology — one that will provide the backbone for a more secure internet, along with a revitalized form of money.

It will be nothing short of revolutionary.