“There’s a lot of pressure into gold, and we’ve just barely begun this cycle,” says Dan Oliver, founder of Myrmikan Capital. In an interview at Kitco, Mr. Oliver doubled down on his expectations for gold.

“Oliver noted that once gold had broken above $1,350 an ounce, institutional investors started to pay more attention, especially once heavyweight fund managers like Ray Dalio of Bridgewater Associates started publicly advocating for gold.”

Something The 5 highlighted over a month ago when we picked up on something Dalio said in a rather long-winded essay at LinkedIn: “It would be both risk-reducing and return-enhancing to consider adding gold to one’s portfolio.”

In the aftermath of Dalio’s pronouncement, gold notched its highest finish since May 14, 2013. (As Dave so elegantly said at the time: “[Dalio’s] reasoning doesn’t matter as much as the fact it’s Ray Freakin’ Dalio who’s saying it.”)

“None of these institutional guys want to be heroes,” says Oliver. “Once a guy like [Dalio] says it’s OK, then they can all do it…

“What’s interesting is that all the institutional money is trying to squeeze into a market that is very small,” Oliver continues, “and it’s hard to figure out how to do it, and that’s what they’re scrambling to figure out.

“So I think there’s a lot of momentum behind this move,” he says.

Like it or not, Robert says, “Recession fears are spreading. Meanwhile, gold has risen nearly 20% since… December when Trump warned: ‘I am a Tariff Man.’” 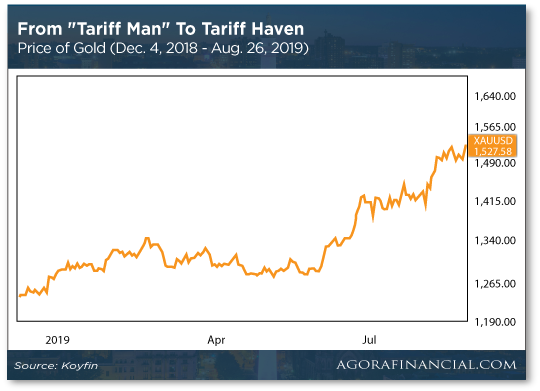 Robert goes on to say the escalating trade war’s played no small role in gold’s recent breakout: “President Donald Trump announced 10% tariffs on the remaining $300 billion of Chinese imports [and] China let the yuan weaken and rise above seven against the U.S. dollar for the first time in more than a decade.

“Trump eased tensions… after announcing he’d delay at least some of the tariffs. But the trade war is still very much alive. Now we have the currency wars to deal with too.

“Gold is up because no one knows if the U.S. currency is going to follow in the yuan’s footsteps,” says Robert.

“People are concerned,” says RJO Futures senior market strategist Phillip Streible. “If I had money in the bank, I [would]             sell the dollars and use that money to buy gold. You are divesting yourself from your currency by selling it and buying a hard asset.”

“Most people think of dollars as money,” Robert says, “but the reality is that the dollar is not. An amusing way of looking at this is to realize you can buy $10,000 in cash from the U.S. Bureau of Engraving and Printing for only $45. The catch is that they're shredded.”

More to the point: “Since Nixon took the dollar off the gold standard in 1971, it is no longer money.

“Before 1971, there was a relationship between a dollar and how much gold was backing that dollar in the U.S. Treasury,” Robert says. “After 1971, that dollar was not backed by anything other than the full faith and credit of the United States government.

“[The dollar] can go up and down in value depending on how other currencies are performing and based on many economic conditions. It is tied to nothing and can move in either direction very quickly.

“The good news is you can [use] fake money to buy real money and real assets,” says Robert.

And here’s the thing: “When I purchase gold,” says Robert, “I do not expect an ROI because I am not taking a risk.

“When I purchase real gold… I purchase [it] forever. I never plan on selling. Just as Warren Buﬀett holds stocks forever, I will purchase gold… forever.

“I use [gold] not as an investment but as a hedge,” Robert says, “and [now] you can easily get started building your wealth through gold…”

Before you read on, Robert has something urgent to share with you. He’s just released his “No. 1 Cash Flow Secret of 2019.”

All you need to do is watch this demo that explains how it works.

But you must hurry because this won’t be online for long.

“While other parts of the economy may show some weakening, consumers have remained confident and willing to spend,” says Lynn Franco of the Conference Board that surveys 3,000 U.S. families to track the consumer confidence index.

While expectations for the next six months cooled marginally from July, the survey’s results show consumers are as optimistic about the overall current economy as they’ve been since 2000.

The Case-Shiller home price index stayed static in June, below consensus, making year-over-year growth now the slowest since 2012. A separate home-price measure from the Federal Housing Finance Agency also clocked in below expectations. Perhaps a sharp decline in mortgage interest rates will put a floor under the housing market…

“President Trump has repeatedly claimed that the United States does not bear the costs of [trade war] tariffs,” says an article at The Hill.

But according to the Congressional Budget Office, trade tariffs enacted by Trump’s administration will cost each U.S. family $580 by 2020.

Doesn’t sound like much? (Although we’re pretty definite you could think of other ways to spend $580.)

“That figure — which does not include new tariffs scheduled to go into effect in September and December — amounts to a significant chunk of economic growth. It is the equivalent of roughly $60 billion in lost economic activity,” The Hill reports.

Not only that: “Higher trade barriers — in particular, increases in tariffs — implemented by the United States and other countries since January 2018 are expected to make U.S. GDP about 0.3% smaller than it would have been otherwise by 2020,” says CBO Director Phillip Swagel.

But hey, look on the bright side — the CBO calculates trade war tariffs will add $33 billion to the U.S. Treasury.

“Pictures of smoggy cities throughout China have earned the Asian nation the reputation of a serial polluter,” says our chart-loving analyst Greg Guenthner.

“But perhaps its funding of solar, hydro and wind projects can help shed the stigma,” says Greg.

According to CNN: “Solar energy in hundreds of Chinese cities is now cheaper than electricity supplied by the national grid, and it can even compete with coal-fired power in 75 of them.”

And the green revolution has everything to do with China investing $365 billion in renewable-energy initiatives back in 2017. Notwithstanding, China has a tough row to hoe considering 59% of the country’s energy still comes from burning coal.

“More importantly, the market is whispering that we might be on the cusp of a major tipping point in the solar energy market,” Greg notes.

“Solar stocks are quietly outperforming the averages even as volatility spikes this month — and not just by a few measly points, either.” 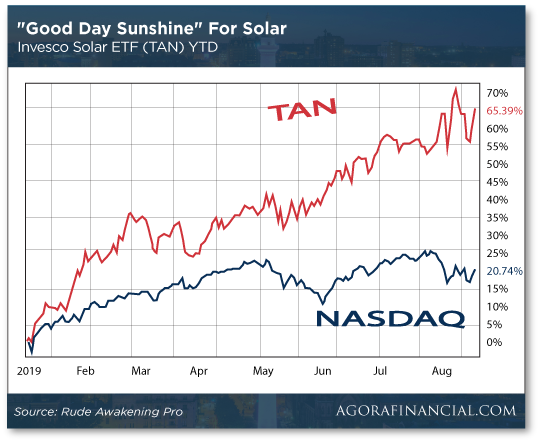 “The Invesco Solar ETF (NYSE: TAN) is up an incredible 65% year to date, compared with a respectable 20% gain in the Nasdaq Composite.” (emphasis added)

Yep. You read that correctly…

“That’s a welcome change from the sector’s performance during last year’s fourth-quarter meltdown,” Greg says. “During the second half of 2018, TAN managed to drop a disastrous 30% in just five months, to new 52-week lows.

“At the time,” he continues, “I noted solar stocks were deeply oversold as they rocketed off their November lows. A quick rally set up an attempt to break free from a nasty downtrend that had trapped TAN since late May.”

Of course, not many stocks were exempt from December’s Christmas Eve sell-off — solar stocks were no exception. But by January, the sector had shaken itself off and, says Greg, “commanded my full attention by late February as TAN rocketed to a year-to-date gain of 35%.

[Ed. note: This video will be removed from the internet tonight…

And because it might change the rest of your life…

We urge you to take just 90 seconds out of your day to watch it.

From the unlucky criminal files: According to the Nassau County Police Department, a man from Hicksville, New York, attempted to make a traffic stop over the weekend.

Thing is, the man — driving an unmarked vehicle and blaring an air horn while flashing emergency lights — wasn’t a police officer at all.

And it was all downhill from there…

The impersonating officer tried to pull over a van — a van that was chockablock with actual Nassau County police officers. 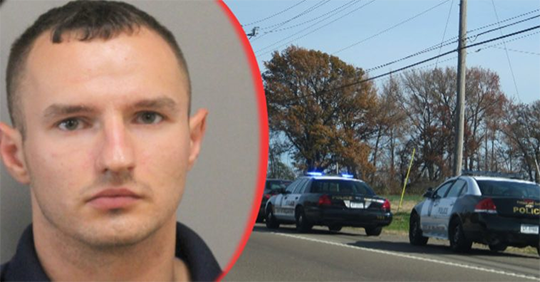 When officers disembarked from the van to confront the police impersonator, he knew the jig was up; rather than surrendering, however, our hapless criminal peeled off into traffic and led police on a high-speed chase down the Long Island Expressway.

The short story is police got their guy — and charged him with criminal impersonation, reckless endangerment, multiple moving vehicle violations as well as unlawful fleeing from a police officer.

P.S. Here’s an opportunity that might have you making $2,781 by next week.

No matter if the market spikes, crashes or stays flat.

And click here to discover how you could walk away with thousands every single week.

Warning: The next cash flow opportunity is WEDNESDAY, Aug. 28, before 10 a.m.