A former Google engineer — considered by many the father of self-driving technology — was indicted yesterday on federal charges in a San Jose court.

The allegation? That engineer and entrepreneur Anthony Levandowski, in 2015 and 2016, poached 14,000 files related to self-driving when he worked for Google spinoff Waymo. 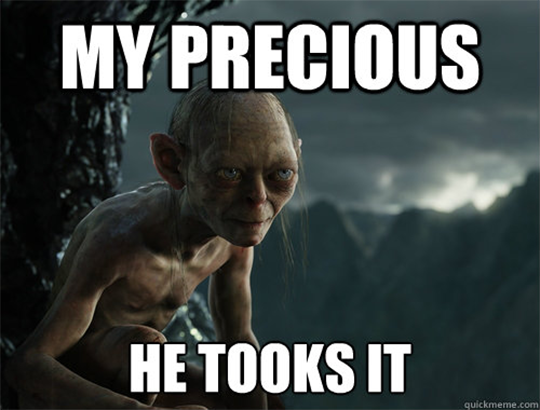 The criminal complaint further alleges: “[Levandowski] then used those trade secrets to create his own self-driving truck company called Otto… Months later that startup was acquired by Uber for roughly $680 million,” says an article at NPR.

After that, Uber tapped Levandowski to be chief of its self-driving department. (Uber “consciously uncoupled” from Levandowski in 2017, however, after Google’s Waymo sued Uber for using trade secrets. Levandowski refused to testify in the civil trial, by the way.)

So yes, there’s a lot on the line but, remember what Mom always said: Cheaters never prosper.

With that PSA out of the way…

“Autonomous Vehicles is a one-of-a-kind experience,” Ray says. “This is all about industry insiders talking shop with other insiders. It’s exactly where you’d want to be if you’re looking to find great, under-the-radar opportunities in this fast-growing auto sector.”

And when you think self-driving technology, Tesla’s definitely not the only game in town. “Major car manufacturers are testing new tech — and in some cases working together — to bring about our automotive future,” says Ray.

This year’s attendees included Ford, Mercedes, GM and BMW along with these guys…

You get the idea — and the list goes on…

Ray provides a rundown of some of the cutting-edge tech that’s coming to a showroom floor — or highway — near you.

“The potential benefits of this technology are groundbreaking,” says Ray, and “tech companies and auto manufacturers are constantly innovating to find out what does and doesn’t work for autonomous driving.”

To that end, a keynote speaker at AV19 — Patrick Wilson — director of the Office of Business Liaison for U.S. Department of Commerce — addressed the “800-pound gorilla in the autonomous driving space,” Ray says.

And that would be… China.

“But one of the biggest needs to push driverless cars from proof-of-concept to actual production models is platform standardization. And the type of platform Chinese software engineers develop could impact the path of AV development significantly.”

In other words, innovators need to be on the same page, particularly when it comes to safety.

“The concern is vulnerabilities in AV software could result in accidents and death.

“According to Mr. Wilson it is imperative the Trump administration continue to work with China to develop proper safety protocols and ensure potential vulnerabilities are accounted for and eliminated well before mass-production begins,” Ray says. 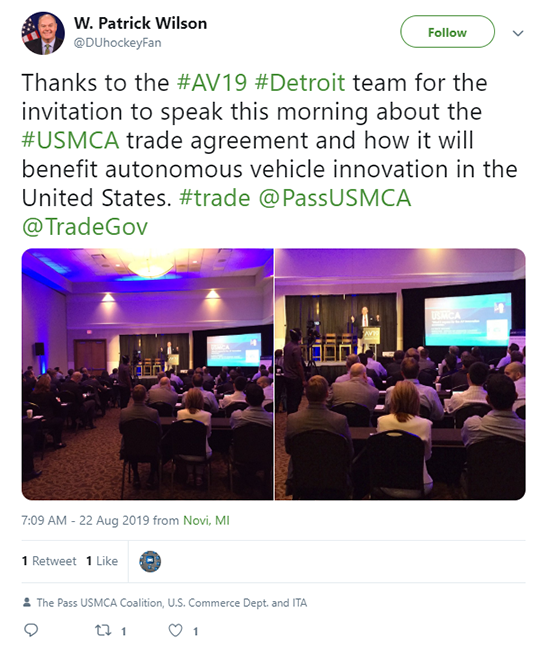 Ray says: “The good news, straight from U.S. Department of Commerce itself, is that Trump and his administration have made AVs one of their highest priorities in terms of new trade initiatives.”

The way Ray sees it, there’s crying need for “new AI systems and machine-learning protocols, new safety measures and new cybersecurity systems to ensure that these AVs cannot be hacked, and that even if they are, they cannot be attacked in the most crucial systems.”

Even more basic: “Communication needs to happen in real-time and at lightning-fast speeds — 5.96 gigahertz, to be exact,” says Ray. “This means we need more 5G networks to make this all work.”

Ray’s takeaway from his time in Detroit? “AV means a host of actionable opportunities for us looking to invest in this space.”

Because autonomous vehicles represent a fundamental and complete reinvention of the way we look at transportation.

In fact, Ray believes 50 years from now — when driverless cars are the norm — we’ll look back at 2019 as the starting point of what might be the most iconoclastic advance since the personal computer.

All of which means massive paydays for early investors…

And Ray knows a backdoor play into AV… [Hint: It will be fast and everywhere and an untold amount of money will be made as this massive shift takes place.]

Get in on the ground floor of this opportunity BEFORE Oct. 8.

And CNBC reports: “Luxury real estate is having its worst year since the financial crisis, with pricey markets like Manhattan seeing six-straight quarters of sales declines.”

We’re talking homes priced at $1.5 million and above…

“Unsold mansions and penthouses are piling up across the country,” CNBC says, “especially in ritzy resort towns, with a nearly three-year supply of luxury listings in Aspen, Colorado, and the Hamptons in New York.”

In more news from the peak boom phase of the boom-bust cycle — phew, that’s a mouthful — a retailer to the rich has filed bankruptcy.

“Barneys New York, an icon of New York retail, filed for bankruptcy early Tuesday morning, with a plan to significantly reduce its footprint, as it looks for a buyer to stave off liquidation,” CNBC says.

Add to that high-end retailer Nordstrom is hanging on by its fingernails as it reports three-straight quarters of declining revenue.

And wonder what’s going on behind closed doors of hoity-toity auction houses Sotheby’s and Christie’s? Not much, apparently, as sales are down from a year ago — 10% and 22% respectively.

When the ultra-rich are snapping their pocketbooks shut… well, you get the picture.

According to the article, intelligence agencies in the U.S., U.K., Germany and France have all issued warnings about foreign agents trying to recruit spies online. “Chinese spies are the most active, officials say.” 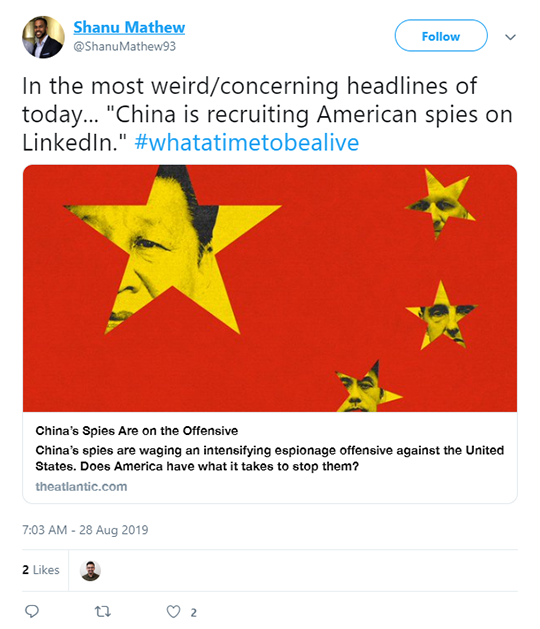 “Instead of dispatching spies to the U.S. to recruit a single target, it’s more efficient to sit behind a computer in China and send out friend requests to thousands of targets using fake profiles.”

Foreign agents grooming spies via LinkedIn… and the ensuing hijinks? Fun to imagine but we question the timing of the article. (The Atlantic, Reuters, CNBC and more have jumped on the bandwagon, too.)

This isn’t a “scoop” as they say in the news biz; in fact, by our reckoning, this story broke almost a year ago to the day. Slow news day much?

Not only that but demonizing China is low-hanging fruit considering the trade war shakeup and all that’s going on in Hong Kong, something Dave talked about extensively last week.

“The People’s Bank of China sets the yuan midpoint and then limits up or down movement by two points in either direction,” says a longtime friend of The 5.

“Now, I could see if Washington were whining that Beijing wasn’t allowing the yuan to freely weaken like the off-shore yuan, but no, that’s not what they are doing.

“It seems Washington wants Beijing to artificially pump up the yuan, which would actually be manipulation.

“At this point I would almost like to see Beijing say ‘frack it’ and let it free-float just so I can grab some popcorn and watch the wonks in Washington lose their collective sh*t.

The 5: So it’s not currency manipulation… until it no longer serves U.S. interests?

P.S. A brand-new internet technology promises to be faster than cable yet over seven times cheaper, which could save you an easy $19,494.

But everything shifts Oct. 8… Discover the full story here.