Don’t Miss the Trees for the Forest

“5G promises tremendous improvements to the world as we know it,” says our M&A specialist Zach Scheidt. And if you’ve been a reader of The 5 for any length of time, you know about 5G’s potential…

We said last year: “It’s not hyperbolic to say every tech innovation over the last 20 years has been made possible — directly or indirectly — by wireless networks.”

And with the adoption of lightning-fast 5G wireless, what’ll be the next big thing?

“The tsunami that 5G will set in motion is estimated to grow the world’s economy by $3 trillion and create 22 million jobs.

“But the best time to invest is now… when 5G’s launching,” we said at the time.

“From video streaming to health care,” says Zach, “the new network will deliver data faster than ever before.”

Here’s the rub: “Your current smartphone isn’t equipped to handle all those data. And as we speak, device makers are in the process of building 5G-compatible phones for this new world.”

One key component that’ll need to evolve to handle the influx of data is the smartphone’s filter; without getting too technical, the filter chooses desired radio frequency signals and passes on unwanted signals. (So a filter, well, filters.)

“The 5G revolution simply can’t progress without these new filters,” says Zach, “putting pressure on manufacturers to pump them out fast.” Add to that, next-generation 5G-capable smartphones will require about double the number of filters per phone.

And “the process takes months of trial and error to get the complex design just right. 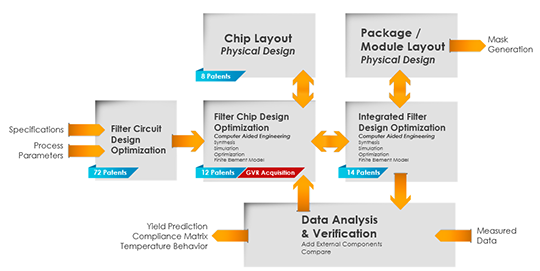 Now that’s a flowchart — we notice, in particular, the number of patents the company’s accumulated.

“Resonant doesn’t physically make the filters,” Zach says. “Instead, it licenses out its designs for fees and collects royalties on the products.

“Where the old trial-and-error in-house design process might take months… Resonant runs its designs through its simulation software, which cuts the time down to only a few weeks.”

Because of which, more and more manufacturers are turning to Resonant. “That means Resonant is looking at a heavy flow of profits as soon as 5G phones are rolled out.”

Zach says: “To profit off 5G, most investors are focused on big telecom companies… the ones currently building out 5G networks and technology.”

But — by focusing on companies like AT&T and Verizon — Zach believes investors are missing the trees for the forest. (See what we did there?)

“The 5G boom is really fueled by small suppliers like Resonant,” he says, because “its solutions will be critical to winning the 5G race.”

Even better: In early August, “Murata, with $7 million, led a $10 million investment round in RESN,” says Daniel Carlson of Tailwinds Research.

“Murata is a wireless filter manufacturer based in Japan… with major ties into Asian markets. They are a 500-pound gorilla in this industry, with 30% market share in duplexers and over 75% share on some modules,” Mr. Carlson says.

And with a $26.5 billion market cap: “Murata is an ideal partner for Resonant…

“This is a solid deal,” Carlson concludes, and “a very positive endorsement of Resonant’s technology.”

Zach says: “Because [Resonant’s] still relatively unknown, you can grab shares while it’s cheap. But don’t expect that to last long.”

He believes Resonant might be in the crosshairs (in the best way possible): “Resonant’s small $85 million market cap is an easy target for a multibillion-dollar company like Murata.

“And the 5G space is perfect for buyout action… so I wouldn’t be surprised to see a deal inked very soon.

“As… large companies look to carve out a dominant position in 5G,” Zach says, “they will need to combine forces with companies that have expertise in specific technologies or applications.”

[Ed. note: One of the reasons you read The 5 Min. Forecast in the first place: You’re interested in making extra cash.

That’s good. You deserve it. So let’s actually do something about it.

Here’s an opportunity that might give you the chance to make massive profits. We’re talking about a one-time buyout opportunity happening TODAY.

Because riding the wake of this potential deal might prove extremely profitable.

The best part? Buyouts like this happen FAST. So you could see a check for thousands of dollars lying on your kitchen table by next Friday.

But remember, this is a one-time opportunity. This buyout could be here and gone before you know it…

So please, click here for the details before it closes TODAY.]

Perhaps hinting at a comeback?

“The Russell 2000 small-cap index posted a respectable gain of more than 1% to hold the line after closing below its May lows on Tuesday,” Greg says. 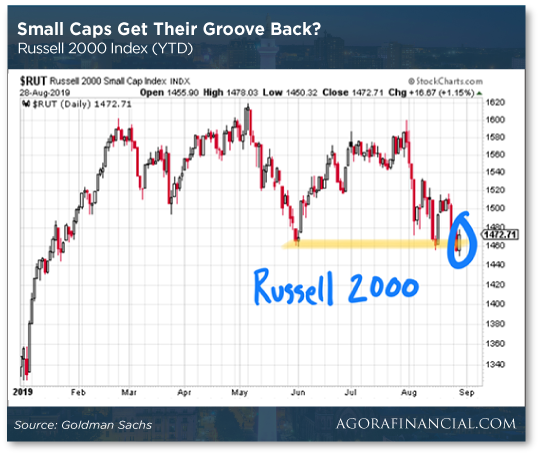 “Relative weakness” in small caps “has been a thorn in the market’s side all summer. A little positive momentum here could go a long way in repairing some of the damage inflicted on the markets this month.”

The bond rally sent the yield on the 30-year Treasury bond to an all-time low of 1.9% yesterday — just one day after the yield slipped below 2% for the first time ever…

“Silver continues to power ahead with sharp gains to hit another more-than-two-year high overnight” at $18.31 per ounce. 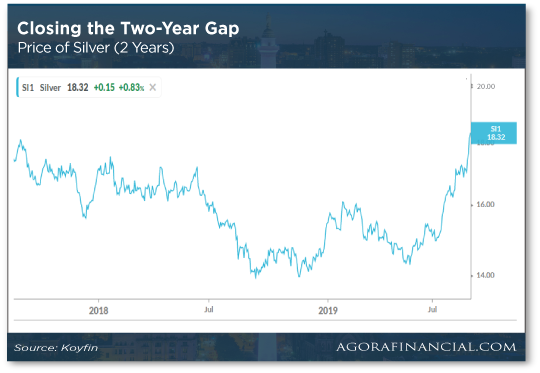 Historically speaking, one way to determine if it’s time to buy silver is to take a look at the gold/silver ratio — the number of ounces of silver it would take to buy one ounce of gold.

As of this morning, it would take about 83 ounces of silver to purchase one ounce of gold; in other words, the “poor man’s gold” is still cheap.

One metal not catching its bid? Copper — priced at $2.55 per pound today. “After falling to two-year lows early this month on fears of a global slowdown,” says an article at Crypto Briefing, “copper futures are now bearing the brunt of uncertainties stemming from trade tensions between the U.S. and China.”

According to the article, “China accounts for 40% of global demand for copper.” It makes sense, then, that the price of the red metal is sagging, as China’s GDP growth for the second quarter of 2019 — 6.2% — represents a 27-year low.

“[Attorney Reid] Weingarten’s comments came during a proceeding where prosecutors were seeking the dismissal of child sex trafficking charges against Epstein as a result of his death,” CNBC reports (emphasis added).

“Weingarten cited the defense’s own medical sources. Broken bones were found in Epstein’s neck during an autopsy after he died Aug. 10.”

CNBC says: “Such fractures are somewhat more common in cases of strangulation than in hanging.” 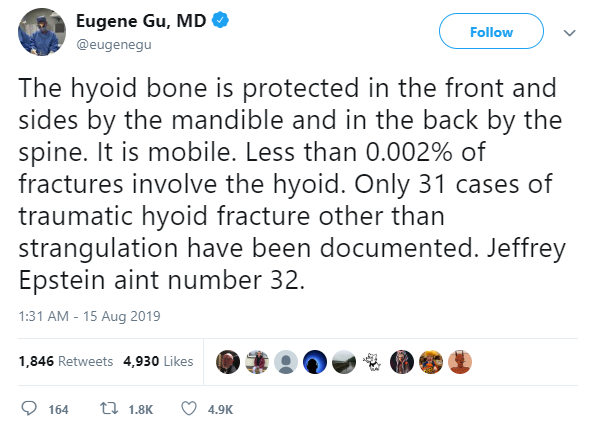 Of course, we wouldn’t want to be labeled wild-eyed conspiracy theorists or anything…

But it’s awfully convenient — for certain parties — to ditch the federal case against Epstein because of his untimely passing.

And after Weingarten raised the question of foul play, federal prosecutor Maurene Comey said: “It is not the purview, respectfully, of the court to conduct an investigation into uncharged matters.”

CNBC reports: “The focus of the hearing, [Ms. Comey] added, should be to allow Epstein’s accusers to be heard ‘and to bring this case to a close.’”

Cold comfort for his accusers.

The two condos, located in the Lower East Side, were divided in half horizontally, carving out 18 miniscule apartments… and a weird floor between the building’s stories.

“The ceiling heights were 4.5–6.0 feet tall on each level, depending on where you were standing,” says Abigail Kunitz of the city’s Department of Buildings. 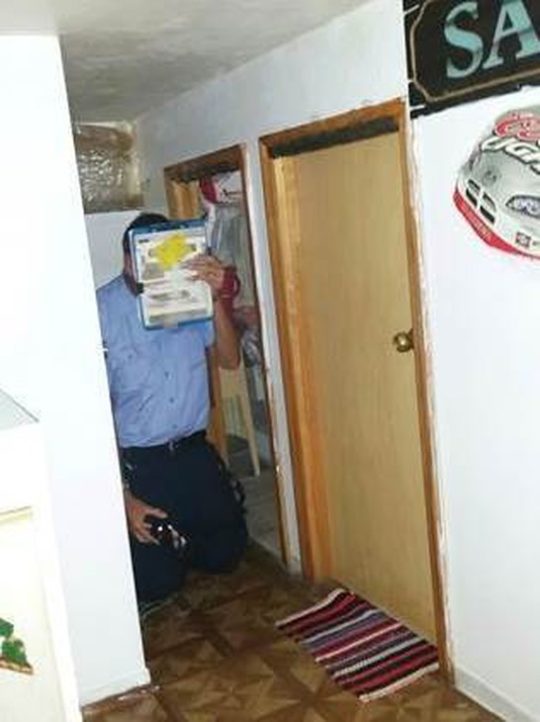 “Does this apartment make me look fat?”
Courtesy of NYC Dept. of Buildings

“When an inspector visited the building this month, he found half-size doors and low ceilings, forcing him to kneel in an improvised hallway,” says NPR.

“A small staircase connected the two floors. Along with unapproved structural changes, the Department of Buildings says, the inspector found the space riddled with unpermitted electrical and plumbing work.”

One condo unit — listed at 634 square feet — if divided evenly, would yield nine apartments at 70 square feet each; a tenant occupying one of the illegal spaces said he paid $600 per month.

Dumpster-fire living conditions only underscore the lack of affordable housing in NYC… but hey, there’s a glut of Manhattan penthouses on the market, we reported yesterday.

A lot of good that’ll do anyone…

P.S. If you’re even a little serious about making extra money — this is the research you’ll want to look at TODAY. Don’t wait. (Zach just hit a 157%-return home run yesterday!)