It feels like a nigh-impossible task this morning… but we’re going to try to pull some signal out of the overwhelming noise emanating from the Middle East.

As you’ve surely heard by now, major oil facilities in Saudi Arabia came under attack shortly after most global markets shut down for the weekend on Friday night here in North America. 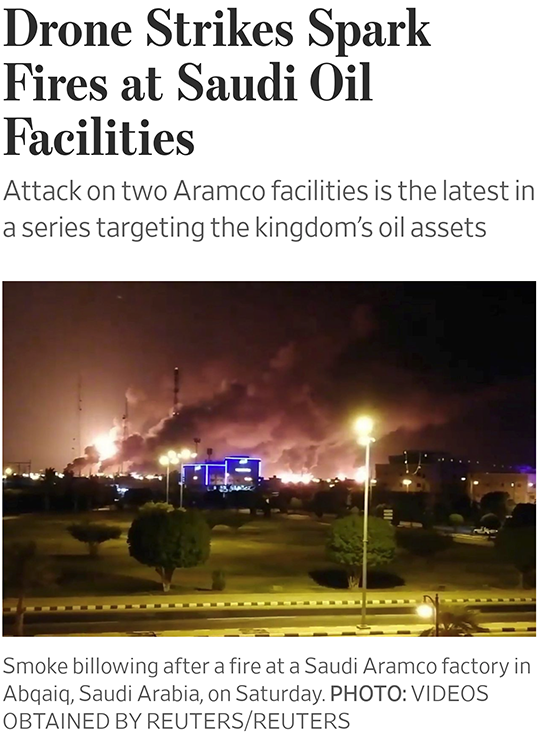 Here’s our problem. Everyone who’s got a stake in this event is pushing an agenda — everyone except you and me as consumers of energy and as people who want to know how the markets and the economy will be affected.

Let’s begin with what we do know — or if it’s something we don’t know with certainty, at least we have no reason to doubt otherwise…

Aside from that, we know nothing.

At first, responsibility for the attacks was claimed by the Houthi rebels of Yemen — the targets of a genocidal war waged by Saudi Arabia since 2015, a war aided and abetted by President Trump and President Obama before him.

[Critical context: By one estimate, the fighting has killed 91,600 Yemenis, and at least 85,000 Yemeni children under age 5 have died of hunger and preventable illness. The United Nations says 10 million people need food aid to survive. The war would end today if Trump ended U.S. targeting and refueling assistance for Saudi Arabian jets.]

Then Secretary of State Mike Pompeo blamed Iran, because why not? John Bolton is gone as national security adviser, but plenty of others remain in the Trump administration who have a burr in their saddle when it comes to the Islamic Republic.

Pompeo had nothing to back up his assertion. Since then a host of anonymous “senior administration officials” have been whispering in reporters’ ears about how it wasn’t drone aircraft attacking from the south, but rather missiles fired from the north. Still no hard evidence, though.

For his part, Trump says Washington is “locked and loaded depending on verification, but are waiting to hear from the Kingdom as to who they believe was the cause of this attack.”

Gee, who do the Saudi princes look upon as their archenemies? Uh, that would be the mullahs in Iran.

Oy. One of the lower-tier Democrats running for president sums up the situation rather nicely, we think…

Beyond that, everything gets extremely murky. But there are three realities it seems no one wants to talk about. We’ll address each of them briefly…

First reality no one wants to talk about: If the Houthis carried out these attacks with drones, it’s the proverbial “game-changer” in 21st-century warfare.

This isn’t the first time the Houthis have tried using drones to attack Saudi Arabia’s oil infrastructure. But up till now they were pinprick attacks with little impact.

“Flying a drone, that puts a new spin on things,” says Jeffrey Price from Metropolitan State University of Denver. “It enables attacks that previously weren’t able to be conducted with that level of stealth and detachment from the attacker,” he tells Bloomberg.

“The bottom line is that we are likely to see many more of these sorts of attacks, and in particular, coordinated attacks on multiple targets are likely, possibly in tandem with a cyberattack component,” adds Milena Rodban, described by Bloomberg as an “independent risk consultant.”

Little wonder both Riyadh and Washington would rather lay blame on Iranian missiles, no?

Second reality no one wants to talk about: If Tehran carried out these attacks with missiles, then Saudi Arabia’s air defenses are terrible.

With a drone attack, at least there’s a plausible excuse for why the kingdom’s air defenses were AWOL.

But missiles? Saudi Arabia’s military budget is the world’s third-largest, behind the United States’ and China’s. Its missile defense technology is mostly American-made. Bad look all around.

Third reality no one wants to talk about: What if Iran carried out the attacks with drones?

That’s what the Middle East Eye website is reporting. The strikes “were made by Iranian drones launched from Hashd al-Shaabi bases in southern Iraq,” says an article citing “a senior Iraqi intelligence official.”

What’s more, the official says the attacks came in retaliation for Israeli drone strikes inside Iraq last month, targeting an Iranian-trained Iraqi militia. In this telling, the attacks were coordinated and funded by Saudi Arabia.

The potential for events to quickly spin out of control is vast. Talk of a return to $100-a-barrel oil, something last seen more than five years ago, would not be far-fetched.

Aside from oil, the market impact of the attacks has been muted.

The lone economic number of the day is our first snapshot of how the economy is doing in September, and it’s “meh”: The Federal Reserve’s Empire State survey shows manufacturing in New York state is barely growing. Capital spending is now the lowest in three years.

Among the big movers today is General Motors, down nearly 3% with 48,000 union workers going on strike as of this morning.

“Investor preferences are shifting away from the market’s fastest-growing stocks and toward the market’s slowest-growing (otherwise known as value) stocks,” says our Zach Scheidt.

“On the winning side of this shift are value stocks, which have been totally avoided for years. In recent history, investors have relentlessly sold value stocks from their portfolios in favor of growth stocks.

“This has led to some very expensive growth stocks. [The FANG names, anyone?] And it’s caused prices of value stocks to drop — or at least not keep up with the broader market.

“Investors are moving capital back into value names because they’re so dang cheap. And also because many of these value names pay great dividends.

“This creates potential for some exciting gains (I’m talking about quick 20%, 30% and even 50% pops) from stocks that you would think are stodgy, old boring names.”

Now a follow-up from last week: If the feds go ahead with plans to ban most forms of e-cigarettes, the impact will go beyond companies like the startup Juul Labs.

Twelve U.S. states impose some sort of vaping tax. Seven more have a vaping tax in the works — assuming they don’t give up if a ban kicks in. 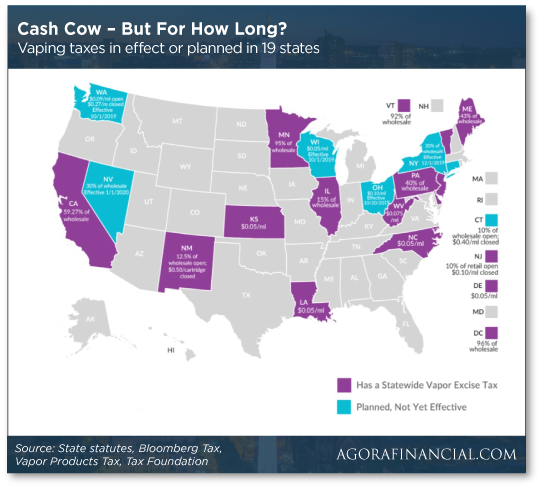 Minnesota collected $5.7 million in vaping taxes in 2016. North Carolina took in $4.5 million. Much of that goes away if flavored vaping products get the federal ban hammer.

“Revenue collected through excise taxes on vapor products should not be considered stable,” the Tax Foundation urges lawmakers. Word…

In a development that should surprise no one, MoviePass is all but dead.

When MoviePass first came on our radar in March 2018, it was offering access to a movie a day at theaters for a $7.95 monthly subscription. Given how the price of a typical single movie ticket is $9, the whole thing seemed preposterous.

And it was. First, the subscription price went up. Then came the restrictions on which movies you could see and when. Then came a pricing scheme that penalized you depending on where you lived. Last we mentioned MoviePass this past spring, the execs were looking to pivot into making movies.

Meanwhile, the market gave up on MoviePass parent Helios & Matheson Analytics more than a year ago… 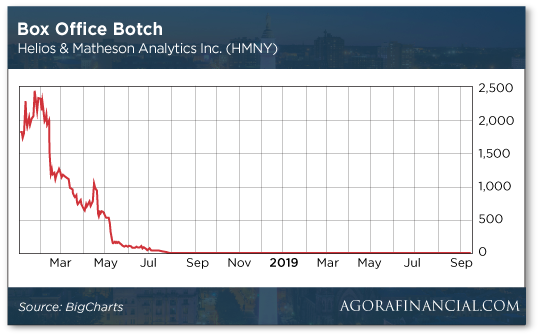 Anyway, it’s all over. MoviePass shut down Saturday. “The company is unable to predict if or when the MoviePass service will continue,” said a statement.

We’ll stick our necks out. It won’t.

We’ll put MoviePass in the same bin as Theranos and Uber’s IPO — signposts of the lunacy that comes late in every market cycle, things people will look back on years later and ask, “What were they thinking?”

After we noted last week that 145 CEOs had written a letter to Congress demanding the feds “do something” about gun violence, a reader writes:

“Being a strong advocate of the Second Amendment, along with the rest of the Bill of Rights and the Constitution, I can emphatically say that there will be no more Levi’s jeans purchased in my home. Levi’s lost its appeal to demographics back when Gen Xers stopped fitting into them anyway.

“I don’t use Twitter. And like most of my generation I’ve had my own ride since before I even had a license, making a 1970 Duster roadworthy before I could legally drive it. Good times.

“But for all the things I won’t be doing, the thing I will be doing is voting, both at the polls and with my dollars. For as long as we have either.”

The 5: As the saying goes, “If voting changed anything, they’d make it illegal.” (The quip is often attributed to Emma Goldman, or sometimes to Mark Twain. There’s no evidence either said it.)

Anyway, your dollars are sure to have more impact. Well, as long as those dollars retain some semblance of value…

P.S. Recently, we took a small group of beta testers and taught them how to use a little-known instrument that trades for about 25 cents.

Imagine making even one-fifth of that!

Click here to see a 41-second demonstration of how this works. Please note the link will go dead once the market opens tomorrow morning.