Regarding the Sept. 14 attacks on two Saudi Aramco oil facilities in Saudi Arabia, three European leaders issued a joint statement Monday: “It is clear for us that Iran bears responsibility for this attack.

“There is no other plausible explanation,” said Emmanuel Macron, Angela Merkel and U.K. newcomer Boris Johnson.

The three European powers are all signers of the 2015 Joint Comprehensive Plan of Action (JCPOA) — longhand for the “nuclear deal” with Iran — that offers relief from sanctions in return for Iran curbing its nuclear program.

Prime Minister Johnson further intimated he’s *this close* to bowing out of the deal with Iran — in a move similar to Trump’s in May 2018.

And Johnson might stan more than just Trump’s coiffure… 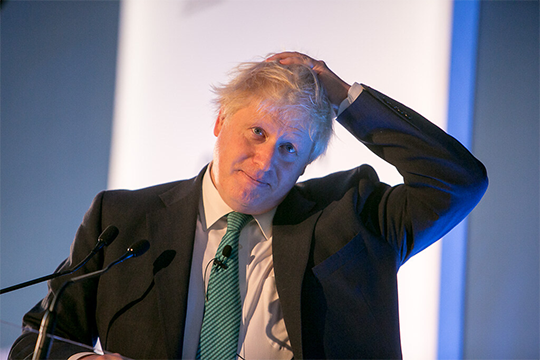 Only my hairdresser knows for sure…

“I think there's one guy who can do a better deal,” he told NBC, “the president of the United States. I hope there will be a Trump deal.”

But… if the Art of the Deal-maker won’t work his wizardry, Johnson quasi-committed U.K. troops to a U.S.-led military intervention.

Any of this putting Iran in the deal-making mood?

Not only that, but Zarif implied — with the subtlety of pounding a podium using a Shaq-sized sneaker — if Iran had been the one to attack the Aramco oil facilities, Iran would have done the job right, putting Saudi Arabia out of the oil biz indefinitely.

Heh… Zarif must live by Omar’s credo in The Wire…

The foreign minister ultimately called out Yemen's Houthi rebels (who’ve all but waved and shouted, “Yoo-hoo, over here!”) because, Zarif says, the rebels "have every reason to retaliate" against the Kingdom’s orchestrated five-years-long war on Yemen.

Our income specialist Zach Scheidt is keeping tabs on the escalating situation in the Middle East — but doesn’t believe that’s the driving force behind oil right now.

“The oil market is about to be turned on its head,” he says, “thanks to an obscure branch of the United Nations.”

Zach’s talking about the U.N.’s International Maritime Organization (IMO): “The agency establishes measures that improve the safety and security of international shipping,” he says.

“It also has a specific mandate to mitigate marine pollution from ships.

“Up until relatively recently,” Zach continues, “ships crossing the globe could run on something called high-sulfur residual fuel oil. It’s a byproduct of refining oil for other uses — essentially what’s left in the barrel after everything else has been made.

“It is the dirtiest, cheapest, most viscous oil on the planet,” Zach says. “Ships are essentially the only things that run on the stuff.”

“And that results in ships releasing a startling amount of sulfur dioxide as they go from port to port.

“Sulfur dioxide forms large particles that can get trapped in people’s lungs, causing severe breathing problems,” Zach says. And according to a study by the University of Delaware, global cargo ship emissions are the primary cause of 60,000 deaths per year, including $300 billion in health care costs.

“So in 1997, the IMO took its first steps to reducing the amount of sulfur coming out of ships, building on the International Convention for the Prevention of Pollution From Ships (known as MARPOL). 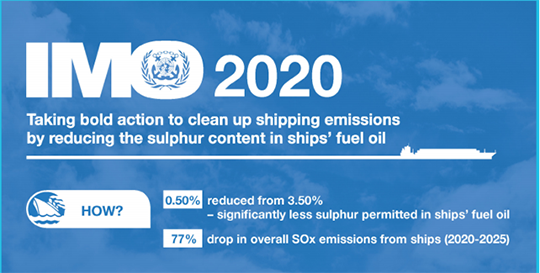 “Policymakers from over 172 countries — including the United States — agreed to abide by new rules” that would ban the use of any fuel with a sulfur content greater than 0.5%.

The rule officially goes into effect on Jan. 1, 2020… and shipping companies have been predictably slow to comply. To their detriment.

“Ships that violate the limit will be assessed steep fines and their insurance will be invalidated,” Zach says. “Without insurance, the ships won’t be allowed to dock at any ports.”

Come New Year’s Day 2020, shipping companies will have no choice but to comply with new fuel regulations. “And that compliance will have all sorts of effects on the world economy,” Zach says.

Most shipping outfits will likely switch to marine gasoil that’s clean enough to meet IMO 2020 standards for sulfur emissions. Trouble is that’ll be a pricey alternative as demand for the cleaner fuel skyrockets.

“But don’t worry,” says Zach. “The shipping companies can simply pass those extra costs onto customers.” Yeah… that was tongue in cheek. The upshot? Consumers will eat the cost of cleaner fuel with marked-up goods.

“However, a small number of companies… are complying with IMO 2020 a different way,” Zach says.

“Instead of getting ready to start using new fuel, some ships have installed ‘scrubbers’ on their ships. These devices remove pollution from a ship’s exhaust… including sulfur.”

Zach expects by the time 2020 rolls around, about 10% of the world’s shipping fleet will be retrofitted with scrubbers. Shipping companies that do will be able to fill up their tankers with cheaper fuel, while the rest of the 90% are paying a premium.

Zach’s money’s on the 10%: “Ships with scrubbers will see their expenses drop significantly and prices for their services increase,” he says. “So they’ll be able to keep more of their revenue as profits.”

Bottom line? “I am legitimately concerned by how few people are paying attention to this story,” Zach says. “The price of everything you buy could take off.”

But for readers of Lifetime Income Report, Zach discloses the single company that stands to earn the most from this new era in shipping — again, that’s happening in less than six months.

Bonus: Learn how you can start collecting checks of up to $7,980, thanks to this “program”… if you act before Oct. 3.

Greg’s a Niccol enthusiast, in fact; “the former Taco Bell boss hasn’t disappointed shareholders yet, taking over just as the stock broke out above $350.”

Shares are a hair under $830 at the time of writing… 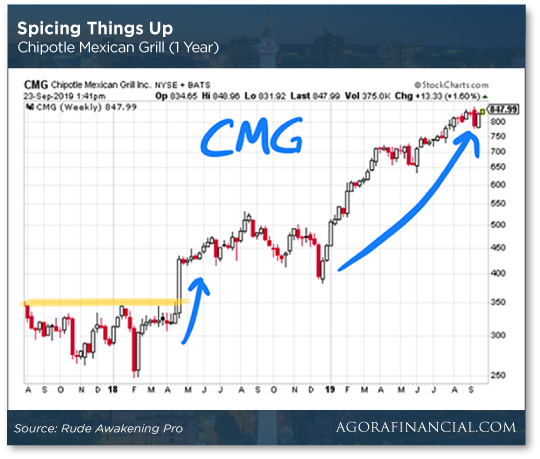 “I mentioned last summer that price was already telling us that the food poisoning scandals didn’t matter anymore,” Greg says. “The outrage… over foodborne illnesses at Chipotle had suddenly stopped affecting the stock during Q2 2018…

“In fact, the hint of turnaround success started to gain traction as the stock began moving in the right direction once again,” says Greg. “The rest is history.”

On the other end of the spectrum, rainy Seattle was the single U.S. city with home prices in decline. Wah-wah. But some of our favorite housing markets to lampoon — San Francisco, New York and LA — just narrowly stayed positive.

“It’s full steam ahead for the [Aramco] IPO, despite setbacks like the attacks on its oil infrastructure and the indecisiveness on a suitable listing venue,” says Oilprice.com.

In what’s turning out to be an issue that’s heavy on oil news, we couldn’t leave out what might be the world’s biggest IPO. Ever.

Aramco is expected to hold meetings Wednesday and Thursday with scores of junior underwriters as senior bankers are working to prepare a November IPO should Saudi officials be so inclined.

One key decision-maker, Crown Prince Mohammed bin Salman (or MBS to his buds), has been twisting a few arms to move the IPO forward… 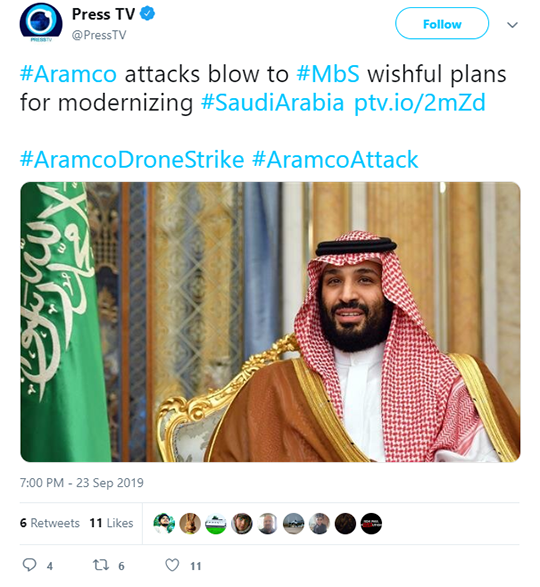 And we mean that literally; allegedly, MBS is not above bullying wealthy Saudis into becoming early investors in the Aramco IPO. Shocker!

“Some of the families approached to be anchor investors (helping to ensure a successful sale in the Aramco IPO) have relatives that were part of the 2017 purge when Saudi Arabia’s leadership locked officials and businessmen in the Ritz-Carlton Hotel in Riyadh in what the rulers said was an anti-corruption drive,” says Oilprice.com.

(In a grim flight of fancy, we imagine the high-pressure tactics of a timeshare salesman applied in reverse: “For a short time only, you’ll have the chance to get in on the ground floor of the biggest IPO in the world!

“But if you don’t act now, you’ll get an all-expense-paid stay at the Ritz-Carlton Hotel in Riyadh… for an unspecified duration.”)

Of course, MBS can’t strong-arm the world *laughing nervously*… Whether it takes Aramco a matter of weeks or months to recover from last week’s attacks will certainly affect investor sentiment when it comes to the IPO.

“If Aramco is… able to make repairs and increase production quickly, investors may be more forgiving when it comes to the inherent risk in Middle Eastern oil,” Oilprice.com says.

“But if it takes eight months, as some have suggested, the IPO could be delayed due to lack of investor interest, and since the plan is for the IPO to bankroll MBS’ grand Vision 2030 plan, a long recuperation might mean MBS will have to rename it Vision 2040.”

Regarding Monster Energy’s litigious streak, a reader says: “Maybe it should be pointed out…

“That Sesame Street was being brought to viewers by the letter ‘M’ long before Monster Energy existed!”

The 5: What’s this you speak of? The letter that must not be named?

And with the next check mailing Jan. 4… you'll want to hurry so you don't miss out!

These checks are available to 244 million Americans. If you're one of them and you don't claim your check, someone else will.

Click here and learn how to claim your first "patriot" check.