The Next Housing Bust

Robert — who accurately predicted the 2008 financial meltdown — knows for every boom, there’s a bust.

So what clued Robert into the collapse of the housing bubble in 2008? Well, it wasn’t keen insight into the derivatives market as detailed in Michael Lewis’ book The Big Short: Inside the Doomsday Machine. 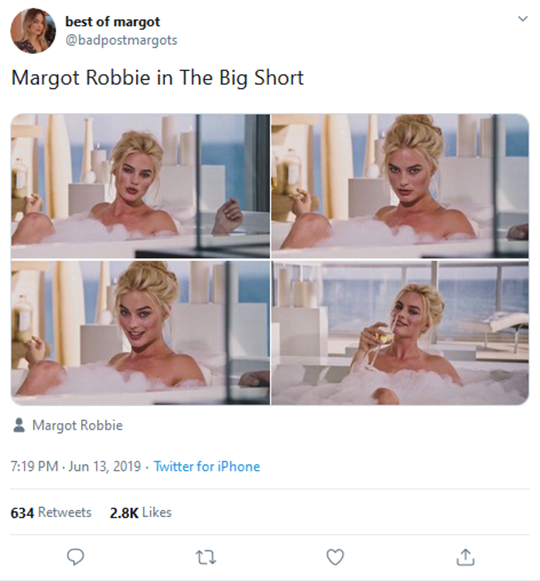 Explaining derivatives — a memorable scene from the movie The Big Short.

No, it was simply an ordinary trip to the grocery store…

“I got my hot tip from the cashier at my local Safeway supermarket,” Robert says.

“While she was tallying the cost of my apples, broccoli and steaks,” he says, “she handed me her new real estate agent's card and invited me to call her for my next real estate investment.”

That was enough for Robert to hightail it home, where he wrote a column predicting the housing market was going to hell in a… grocery basket?

Not that Robert had anything against the cashier getting her real estate license, but if you recall, everyone — and his brother — was flipping mad for real estate! (We mean that literally.)

Robert says: “As my rich dad used to say, ‘When dumb money chases smart money, the party's over.’” (It goes without saying: Robert got his share of hate mail from some pissed-off real estate pro.)

Robert’s not making any bold predictions today, but he — like your editors at The 5 — is convinced we’re living in the late boom phase of the boom-bust cycle.

And he notes that about 75% of economists believe a recession will hit the U.S. economy by 2021. Even though Robert puts about as much faith in economists as he did in that real-estate-come-lately cashier back in the day.

Back to real estate: During times of inflation, house prices float up; the opposite’s true of deflation.

And in a deflationary market, Robert warns: “The bank can call in your loan if they feel the value of the property is lower than the loan amount.” Even if you’ve never missed a payment or are ahead on payments.

“If the market deflates and the value of your home drops to $70,000 (because everyone else is selling their homes to get out of debt), the lender may ask you to pay the $80,000 you owe immediately.”

Good. To. Know… So what might kick off a period of deflation?

“The strong economy we've been experiencing for the last year” — or 11? — “has been built on dumb money (in addition to smart money) borrowing more and more,” Robert says.

Robert actually loves using debt and credit strategically… but says so do most Americans (without the “strategery” part — heh — to borrow a Dubya malapropism).

“And the inconvenient truth about debt is that it has to be paid back.” You can chalk that up with other inevitabilities: death and taxes.

Taking that into consideration, Robert says: Watch your ratios!

“For the next two years,” he says, “I'm cautioning people to watch their ratios between good debt and bad debt and keep liquid reserves such as cash, gold or silver.

“Good debt is debt that makes you rich,” Robert says. “An example of good debt is the debt on the apartment houses I own.”

But Robert’s quick to note that good debt can turn bad: “That debt is good only as long as there are tenants to pay my mortgage,” Robert says. “If tenants stop paying their rent, my good debt turns into poor debt.”

For most Americans, Robert says all they have is bad debt; to his way of thinking, anything that “makes you poorer” is bad debt. You might be surprised he lumps mortgages — if you’re the one paying it — in with car payments, credit card balances and consumer loans.

Back to ratios, when it comes to your home, Robert recommends carrying a 25% debt-to-equity ratio on a mortgage, meaning his debt is 25% of the home’s value.

“Unfortunately,” Robert says, “many people have an 80% or higher debt-to-equity ratio. That means the debt on their home is 80% and their equity is only 20%.”

So working at lowering your debt-to-equity ratio’s important… as is having a reserve fund. Robert, for example, has built up liquidity to carry the costs of rental properties for a year in case all his tenants decided to walk. Improbable… but still.

“There will be half-price sales on BMWs, expensive restaurants will close, and people will be out of work. And anybody who caters to people with dumb money will be in trouble.”

Robert says: “The good news is that during deflationary times, smart money reenters the market, so crashes are great for smart people with smart money.”

So instead of putting too much stock in what financial wizards are saying, Robert says get smart: “Eliminate bad debt and improve your debt-to-equity ratios on good debt.”

[Robert has something urgent to share with you to help build your cash reserves. He’s released his No. 1 cash flow secret of 2019.

Wait until you see this live demo that explains it all.

But you must hurry, because this won’t be online for long.

We spotted this CNBC headline today: 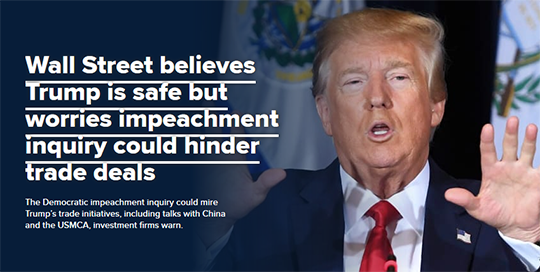 After The 5 went to virtual press yesterday, Speaker of the House Nancy Pelosi announced: “The House of Representatives is moving forward with an official impeachment inquiry.”

For Speaker Pelosi a 30-minute phone conversation Trump had with Ukraine President Volodymyr Zelensky was a bridge too far; a whistleblower allegedly tipped off the DOJ to the call that had Trump asking Zelensky to “look into” former VP Joe Biden and his son Hunter.

So far, a redacted transcript of the conversation’s been released… and what the hell does Ukraine have to do with Biden and son?

As far as we can tell, Trump believes Biden used his clout to sack a Ukrainian prosecutor investigating double-dealing at Burisma Holdings, a gas company where Hunter Biden was a paid board member.

That’s what Trump wanted looking into.

But it gets more complicated than that (it always does): Did Trump hold up the sale of javelin missiles to Ukraine until he got the dirt on Biden?

President Trump says there was “no quid pro quo.”

To the markets, where — apparently — the impeachment of a U.S. president is a blip on the radar… But on word from said president that a trade deal with China might be in the works, the Dow’s up 150 points to almost 27,000.

“In case you wonder if the Fed knows what they are doing,” Jim Rickards says, “I suggest you take a look at their forecasting record from 2007–2015.

“From the 2008 crisis until seven years later, those forecasts were wrong by orders of magnitude.”

Sometimes, says Jim, forecasts were just dead wrong. “For example, forecasting growth in 2008 when we actually experienced the worst recession since the Great Depression.”

“Fed Chair Jay Powell insists that this second rate cut is not part of a ‘sequence’ based on current data,” Jim continues. “This means he might stand pat or possibly even raise rates at a future meeting, depending on growth and inflation data.”

Calling it as he sees it, Jim says: “Powell is out of touch.

“The Fed raised rates too far and too fast in 2018 and nearly caused a recession. The two recent rate cuts are an effort to undo that damage.

“That slowdown is the lagged effect from rate hikes (and balance sheet reductions) in 2017 and 2018.”

Jim says: “If the Fed hikes rates now (or even pauses) they will more or less guarantee the recession they just barely missed.

“You should expect the Fed to cut rates more and gradually work their way back to zero over the coming year,” he concludes. “This is what the economy is telling us even if Jay Powell is the last to know.”

The 5’s always on the lookout for proof of the late boom phase of the boom-bust cycle (see practically everything above); this might be all the proof you need…

Sure, Halloween costumes for women are notoriously trashy. I mean, we all can conjure an image of the ubiquitous sexy nurse outfit that’s on store shelves this time of year.

Speaking of, when have hospitals ever, ever been sexy?

Now — from the sick-minded hacks at costume company Yandy — comes this abomination: 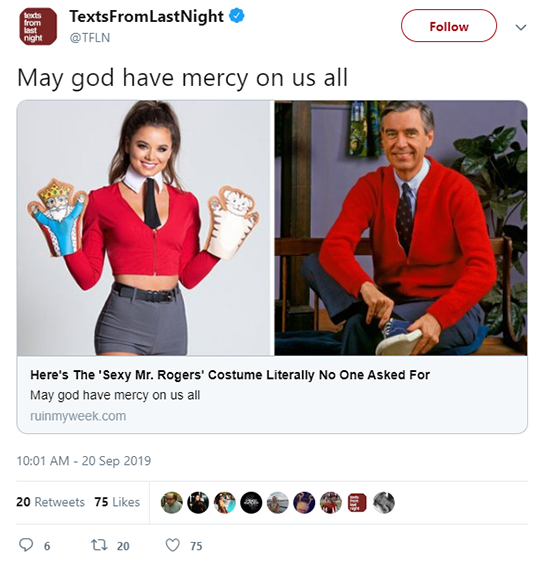 Because Yandy can’t actually use Mr. Rogers’ name, the costume is called the “Nicest Neighbor.”

And the outfit comes with the works — cardigan, tie, hand puppets and… stilettos, of course.

Well, there goes my childhood…