“I’ve only ever put my own money on the line on a few hundred,” he continues.

Kevin’s not about throwing good money after bad. “Every time I find a new deal,” he says, “I put it up against these four criteria.

“I only ever invest my own money if it passes each point. There is no wiggle room here.”

How does he filter the wheat from the chaff?

Criterion #1: The Company Must Have a Product People Love

Think Apple and the iPhone: “Apple was on the verge of collapse back in the late ’90s. They were just another hardware company.

“Then Apple released the breakthrough product of a generation… the iPhone.” And thus began a love affair that had hipsters camping out in front of Apple stores, jonesing for the next-generation iPhone… much like their parents did for Metallica tickets back in the 1980s.

“Apple roared back to life as millions and millions of iPhones flew off shelves all over the world.

“An innovative, customer-friendly product” then fits the bill: “When I invest,” Kevin says, “I need to see a product that could have mass appeal. A product people are going to use, talk about, love and keep for a long time.”

In other words, Kevin looks for game-changing products with potential for “magical transformation.”

Criterion #2: The Company Must Solve a Real Problem Shared by Millions of People

A company or product can be novel and even ingenious but if it doesn’t bring a solution to market for everyday people, Kevin takes a hard pass.

“Funny story,” he says, “I was once pitched a startup that was an alarm clock and toaster oven in one.

“OK concept, but how many people would replace both those items in their house with one item that did both things? There was just no demand for it.”

Unless… you pre-loaded the toaster and it woke you up with the smell of freshly toasted bread? Just sayin’…

“Meanwhile, look at a company like Walmart. Why is Walmart everywhere and so successful?

“Walmart solves a problem shared by EVERY person: the need for quality products at affordable prices.” And they make billions of dollars every year because of it.

Criterion #3: The Company Must Be Led by an Experienced Team

“That’s why you want to invest in companies led by folks who have either done it before or have access to experienced advisers who can help them.”

To wit, Kevin takes a look at Roku, the company that makes a “device that lets people stream live TV anywhere.

“Most folks don’t know this… But the founder of that company, Anthony Wood, was actually the inventor of the DVR.

“The DVR… I mean… it was in EVERY single home in America,” Kevin says.

“It was clear Anthony had the experience, the moxie and the vision to do the same thing with Roku.” And — because of that — Roku is a $16 billion company today.

“When I put my own money on the line, I want to be buying talent like Anthony,” Kevin says.

“Or if it’s some young kid with a breakthrough idea, I want someone like Anthony somewhere in the business so I know for certain there’s experience on the team.”

Criterion #4: The Company Must Have a Real Advantage Over the Competition

“This is what Warren Buffett calls a ‘moat,’” says Kevin. “A company must have truly unique positioning.

By way of example, Kevin’s going to the movies, taking a look at Disney-owned Marvel Studios.

He believes Marvel has landed on an unbeatable formula no one can even touch.

You listening, DC Comics? I mean… Batman v Superman? What a turd. 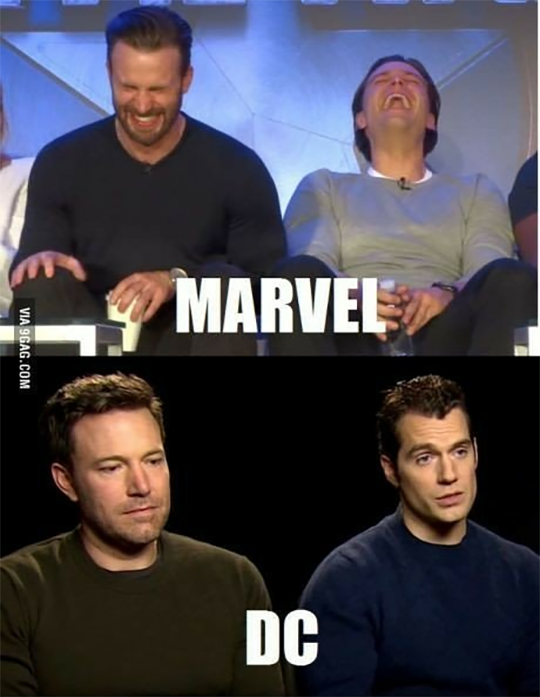 “Marvel owns the rights to the stories, the characters, the merchandising, you name it,” says Kevin.

Kevin says: “I only ever keep working on a private deal if the company goes four-for-four on this checklist. Then and only then does he even consider investing…”

And on Tuesday, Oct. 1, at 1:00 p.m. EST, Kevin reveals the private deal that ticks all the boxes… and might turn every $50 into thousands of dollars.

“I’m going to show you how to get in on this deal before I put thousands of my own dollars in,” Kevin says.

“Plus, you’ll see how you’ll book a GUARANTEED gain if you get in before me, AND how you can do this with just $50, right from home, in two minutes, with no paperwork or hassles.”

Kevin takes the wraps off this private deal — that everyday investors are normally excluded from — on Oct. 1 at 1:00 p.m. EST.

The U.S. and China are scheduled to thrash out a trade agreement on Oct. 10 in D.C. Ahead of talks — per China’s request — the president’s suspended tariffs on soybeans and pork by two weeks.

Does it feel like the U.S. and China are breaking the ice? Not according to one-third of consumers who participated in the University of Michigan’s Surveys of Consumers; they cited the trade war as a major drag on the U.S. economy.

And consumers might be onto something: Today the rumor’s churning that the White House might block U.S. investment in Chinese entities. Nothing’s set in stone but, as CNBC puts it: “The U.S. [is looking] for additional levers of influence in trade talks.”

On the news, shares of Alibaba, Baidu and other high-profile Chinese companies are down today.

Downward pressure on the price of oil seems to have settled a bit; a barrel of WTI is down 27 cents to $56.14.

Bitcoin’s price skidded below $8,000 Thursday for the first time in three months (keep in mind the crypto’s still worth double what it was at the beginning of the year).

The dramatic drop for the flagship crypto might be intentional, part of a scheme by one or more bitcoin whales.

Whales are investors with high net worths in particular cryptocurrencies who have the ability to swing the crypto markets.

“Oftentimes, the strategy for whales is simple: liquidate BTC through major sells to create a cascading effect throughout the entire market,” says website BeInCrypto. “As more and more people panic sell, the price drops and the whales ‘buy the dip.’”

“Pump and dump” in reverse? Kinda?

And a “whale alert” came through yesterday afternoon when a crypto high roller transferred $10 million from one crypto exchange to another, presumably poised to capitalize on bitcoin’s suppressed price.

“You’ve seen the headlines about impeachment proceedings against President Trump,” says our managing editor, Dave Gonigam, at The Profit Wire. “You’ve probably not seen how the hand of the so-called ‘Deep State’ made it happen.”

Dave’s quick to point out the “Deep State” isn’t a figment of the tinfoil set. “It’s a shorthand name for the permanent bureaucracy that inhabits the D.C. swamp, especially in the realm of intelligence and national security.

“The impeachment bus has been slow-moving,” he continues, “until now. Democrats have latched onto ‘Ukraine-gate’ in the expectation it will catch on in a way Russiagate never did.”

The dam of resistance to impeachment appeared to break fully and finally Monday night with the online publication of an Op-Ed in The Washington Post by seven House Democratic freshman members calling for an impeachment process to begin. All seven of the authors formerly served in the military or national security agencies. All are political moderates. All come from swing districts; indeed, Mr. Trump won the vote in four of the seven districts in the 2016 presidential campaign. [emphasis added]

“This group of seven freshman congressmembers belongs to a group that writer Patrick Martin labels ‘the CIA Democrats.’

“In a thoroughly researched series of articles for the World Socialist Web Site — you never know where you’ll find quality news analysis! — Martin noticed an unusually high number of Democrats with military or intelligence backgrounds running for the U.S. House in competitive districts,” Dave says.

Here’s the rundown, according to Martin’s research:

“Martin is scrupulous about not jumping to conclusions,” Dave says. “Nowhere does he allege the ‘Deep State’ purposely orchestrated a campaign of ex-spooks and soldiers pursuing House seats in swing districts with an eye toward impeachment. But the phenomenon is nonetheless striking…”

Dave’s conclusion: “These Deep State insiders don’t get as much press as ‘the Squad’ — the hard-left faction led by Alexandria Ocasio-Cortez — but they’re the ones exercising outsized influence as the D.C. swamp careens toward impeachment.”

To the mailbag, a reader says, “In [Wednesday’s] 5 you wrote: ‘Trump believes Biden used his clout to sack a Ukrainian prosecutor’…

“Considering Biden was recorded bragging about using his power to withhold $1 billion in aid to Ukraine if the prosecutor, who was getting ready to file charges against Biden’s son, wasn’t fired within six hours… I would say anyone with a brain also believes Biden ‘used his clout to sack’ an investigation of his son!

“As Biden himself laughed, ‘Well, son of a bitch. He got fired!’

“Poor job of documenting the facts!”

The 5: We never intended to take a deep dive into the particulars of the impeachment inquiry Wednesday — just wanted to give readers the gist.

As for the “smoking gun” video from a January 2018 event at the Council on Foreign Relations, Biden practically crowed about holding out the carrot of $1 billion in loan guarantees in return for the firing of Ukraine’s prosecutor general, Viktor Shokin, in 2016.

But according to Daria Kaleniuk, lawyer and founder of Ukraine’s Anti-Corruption Action Center: “Shokin was fired because he attacked… reformers within the prosecutor general’s office, reformers who tried to investigate corrupt prosecutors.” (And Shokin was a notorious thorn in the side to many Western governments, not just the U.S.)

To be clear, Shokin wasn’t about weeding out corruption — those in glass houses? — least of all looking into Burisma Holdings or Hunter Biden.

Admittedly, there’s much more to this impeachment Gordian Knot to untangle…

What has befallen us? We’re confused by the latest flavor profile concocted by the folks at Hormel.

In further proof that Americans can’t get enough pumpkin spice in their lives — and in celebration of the first day of autumn — Spam unveiled its latest offering Monday. 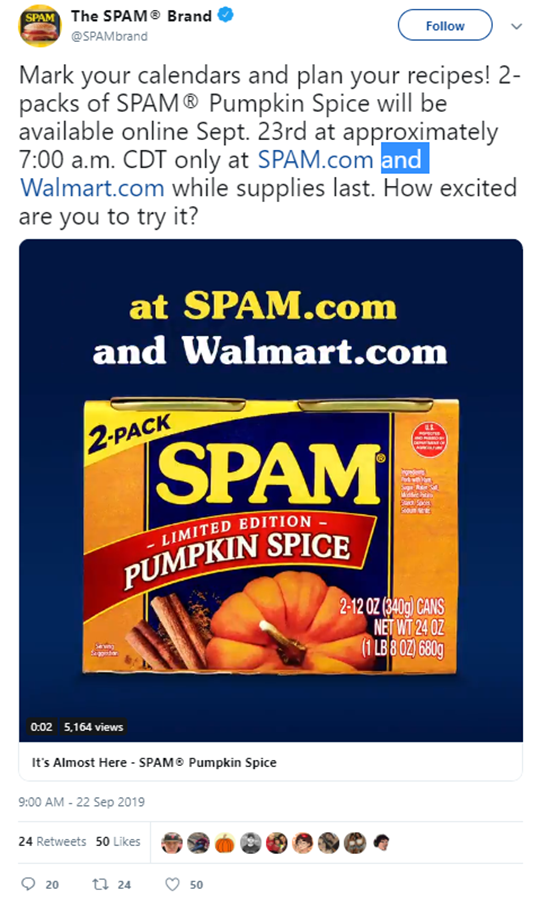 And the canned “ham” (we’re being generous here) sold out in less than seven hours.

For a review, we turn to the foodies at Food & Wine who said the Spam iteration “teet[ers] on the line between overdue and unexpected.”

Yes, but does it have a full-bodied aroma with a metallic aftertaste? Heh.

We prefer the wisdom of writer Theodor Geisel — aka Dr. Seuss — whose character when confronted with a dubious ham product said: Nope, not in a house, with a mouse, in a box, with a fox… you get the idea.

Have a good weekend!

P.S. “This private deal could turn every $50 into thousands.”

This is a world’s first. Never before have you had this level of access and information on the best private company deals AND a way to get in at super-cheap prices.

On Tuesday, Oct. 1 at 1:00 p.m. EST, Kevin Harrington’s going to show how you can invest in this deal before he puts thousands of his own money on the line.