Ponder this: More than a quarter of the U.S. population now lives in a state that’s legalized recreational cannabis. But the number of cannabis arrests has risen three straight years.

The FBI has just released its annual Uniform Crime Report. It says law enforcement in these United States made 663,367 arrests for marijuana offenses last year — 90% of which were for mere possession.

Pot-related arrests were least likely to occur in western states, where legalization is most widespread… while 53% of all arrests were concentrated in the Northeast.

Anecdotally, your Michigan-based editor — recreational weed became legal here in January — is hearing reports of cops in Indiana and Wisconsin getting a little, shall we say, aggressive in pulling over cars with Michigan plates.

On the other side of the ledger, the weed industry is a critical step closer toward winning access to the banking system.

A few days ago, the U.S. House passed the SAFE Banking Act — which would allow banks and other financial institutions to work with cannabusinesses.

The vote was overwhelming — 321-103, including 91 Republicans in favor. “A strong bipartisan outcome in the House,” says Terry Holt of the National Cannabis Roundtable, “means that we have a better chance of getting the Senate’s attention.”

Of note is that Senate Majority Leader Mitch McConnell is set for a two-day visit to California, meeting with a few members of that motley assortment to discuss a Senate version of the bill. Stay tuned…

Ray tells us something interesting happened a week ago yesterday: The stock market tanked, and cannabis stocks fell in sympathy — until midday when suddenly they rallied hard.

“For instance,” he says, “while the ETFMG Alternative Harvest ETF (NYSE: MJ) was down as much as 4.4% during Wednesday’s session, it ultimately managed to end the day higher.”

Several individual names ended the day much higher. “And they followed up with more upside Thursday,” Ray tells us.

“Whenever you see a trampled corner of the market rally hard while everything else is getting sold off, pay attention. Mr. Market may be trying to tell you something.”

Of course, there are always individual names in the sector that can buck a bear market and deliver jaw-dropping gains. Ray has a bead on one that he’s especially keen to tell you about at this link.

“Stocks fall after wild overnight session as traders deal with uncertainty around U.S.-China talks,” said a CNBC alert just after the open.

Then came word the president will meet tomorrow with Chinese Vice Premier Liu He — the main man on the Chinese side of the trade table.

With that, it’s risk on, baby! The major U.S. stock indexes are all up nearly 1% on the day. Treasury yields are rising. Gold is back below $1,500.

Adding to the cheer is this morning’s consumer price index — flat for September. Year over year, the official inflation number is down to 1.7%

Thus, the odds of another interest-rate cut by the Federal Reserve at month’s end are now 78% according to the futures markets.

As always, the official inflation number’s resemblance to your own cost of living is purely coincidental; the real-world inflation rate from Shadow Government Statistics is 9.4%.

In a development whose timing can’t possibly be coincidental, Turkey and Russia have agreed to bypass the U.S. dollar in payments between the two countries.

Turkey is signing on to Russia’s version of SWIFT, the U.S.-dominated global payments network.

Turkey and Russia have been growing closer all year, with Turkey buying S-400 air-defense missiles from Russia despite Turkey’s membership in NATO.

The payments agreement was signed last week… but the announcement came on Tuesday only hours after Donald Trump threatened to “totally destroy and obliterate the Economy of Turkey” if Ankara crosses some ill-defined red line of his in its invasion of northern Syria.

As we noted on Tuesday, Turkey is part of an “axis of gold” along with Russia, Iran and China. It’s our Jim Rickards’ term of art to describe the four countries’ aim to create a payments system, possibly gold-based, that’s “free of hacking, tracking or interdiction by the U.S. and free of U.S. dollars.”

It’s a slow-motion process. But with Washington ever more eager to use sanctions as a tool of coercion, we seem to be reporting developments in this process more frequently of late…

Speaking of stupid sanctions tricks… there’s the absurd but totally understandable decision by the software company Adobe to cut off service to all its customers in Venezuela.

As you might be aware, the Venezuelan government of Nicolás Maduro is subject to U.S. sanctions. Thus Adobe sent an email to its Venezuelan customers on Monday: “The U.S. Government issued Executive Order 13884, the practical effect of which is to prohibit almost all transactions and services between U.S. companies, entities and individuals in Venezuela. To remain compliant with this order, Adobe is deactivating all accounts in Venezuela.”

Users have until Oct. 28 to download any content stored in their cloud accounts. At least Adobe is backing down from its original plan to issue no refunds.

One of the top figures in a U.S.-backed coup attempt against Maduro this year complained bitterly on Twitter: “This [executive order] calls for an end to any commercial relationship with the Venezuelan government, not its people,” said Braulio Jatar III.

Yeah, but that’s not the “practical effect” of sanctions, to borrow the term used in Adobe’s statement.

The sweeping U.S. sanctions against Iran, for instance, hypothetically make an exception for food and medicine. But the reality is that banks are scared to death of processing any payments for Iran lest they get shut out of the SWIFT network and other dollar-payment systems.

The result? “Out of every 20 people, we have to tell at least 10 that we have run out of medications they need,” the pharmacy chief at a Tehran hospital told ABC News this summer. Children with cancer suffer some of the worst effects: Iranian oncologists published a note in the medical journal The Lancet last year pointing up shortages in chemo drugs and even basic painkillers.

Sanctions make politicians and pundits feel good… but they have little effect on a country’s leadership while they devastate the lives of everyday people.

But for the power elite, it’s all “worth it” — then-U.N. Ambassador Madeleine Albright’s callous words on 60 Minutes in 1996 when asked about the deaths of a half-million Iraqi children under the Clinton-era sanctions against Saddam Hussein. (That clip ran in a nearly endless loop on Arabic-language satellite TV between the time she said it and Sept. 11, 2001. The Iraq sanctions were one of Osama bin Laden’s chief grievances against Washington.)

Stupid copyright tricks: If, like your editor, you were watching Fox’s telecast of the Green Bay Packers-Dallas Cowboys game on Sunday, you saw this cutaway shot of the luxury boxes… 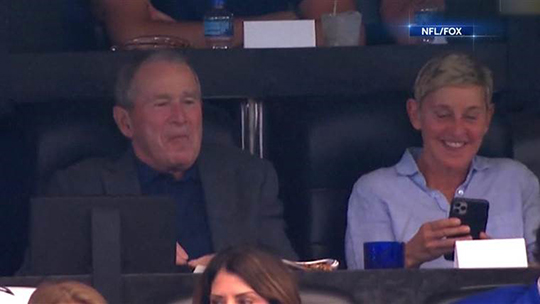 Once again, we’re reminded of George Carlin’s line about the power elite:
“It’s a big club, and you ain’t in it.”

That’s the conservative 43rd president of the United States palling around with liberal comedian Ellen DeGeneres.

Ellen’s fans were outraged — more because she was being friendly to a conservative, it seems, and not because the 43rd president lied the nation into a calamitous war that cost the lives of 4,500 U.S. soldiers and 600,000 Iraqis. Priorities.

It was the friendship aspect DeGeneres felt compelled to address on her TV show: “I’m friends with a lot of people who don’t share the same beliefs that I have. We’re all different, and I think we’ve forgotten that that’s OK, that we’re all different.”

But it’s the war that inspired a fellow named Rafael Shimunov to take DeGeneres’ monologue and add a backdrop of Iraq war scenes. It is a brilliant mash-up — especially Ellen’s shrug posture superimposed over the iconic image of the hooded prisoner strung up with electrodes… 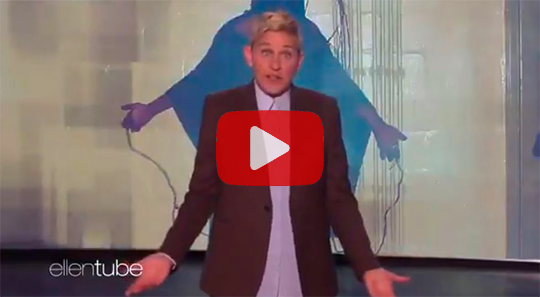 Ellen prevailed upon her production company to promptly issue takedown notices. The craven social media companies quickly complied — even though it would clearly fly in the courts under “fair use” doctrine.

“The Streisand Effect, however, is something celebs and their agents can rarely control,” writes Rob Beschizza at BoingBoing: “Countless social media users are reposting the remix in response to its disappearance, spreading it far wider than Shimunov could have ever hoped.”

“Wow, just WOW!” says an email we got after we were compelled to remind readers on Tuesday that this is an “anti-partisan” publication.

“Why so many politically triggered readers? Maybe it’s time for an ID check since they are essentially acting out like children.

“Seriously, people! The 5 is a FREE publication. If you can’t read it without being triggered, then perhaps don’t read it and save the rest of us from your childish whining. In other words, GET A LIFE…”

“‘We encourage both sides to get a life’ is one of your best comments ever!” writes a reader who’s been with us for at least three years now.

“Politics are a huge sewer and the smell is unbearable.

“I would recommend both sides pray to God that our Congress has the good sense to focus on doing their jobs (like passing a balanced budget) instead of seeing how much pain they can inflict on each other.

“Keep up the great dialogue.”

“So in other words, 51.5% of voting-age Americans voted for more of the same old BS,” writes a third.

“You made it sound like those stats PROVE Americans are not gonna take it anymore. They only confirmed my disgust for my fellow adult Americans on Election Day.

“For the record, I fell into category 2 — voting third party/independent. Yes, I am on a lonely island; I just wish I had more company, and with the mess in D.C., I find it hard to believe I don’t.” 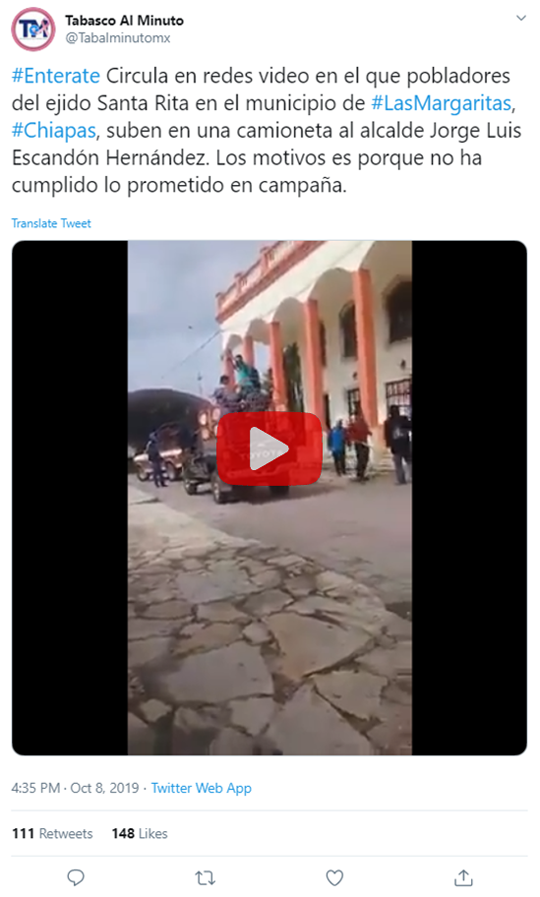 Per Fox News, he was “dragged out of his office, beaten and then tied to a pickup truck and dragged through the streets of the town, according to officials.” Evidently a group of farmers was angry he didn’t follow through on a campaign promise to build a road. Eleven of them were arrested.

Rough justice, to be sure. Then again, there’s the practice of tarring and feathering in our own history…

And if you don’t stake a claim, you’ll miss out on this modern-day gold rush.

In this presentation, America’s No. 1 pot stock insider details a brand-new CBD play…

He says one tiny, little-known company will soon be the No. 1 CBD stock in the world.