“We feel strongly that the defense, intelligence and national security communities deserve access to the best technology in the world,” an Amazon spokesperson told MIT Technology Review.

“And we are committed to supporting their critical missions of protecting our citizens and defending our country.”

This in response to Amazon’s bid for the Pentagon’s $10 billion cloud computing contract known as the Joint Enterprise Defense Infrastructure program, or JEDI (the government sure loves its Star Wars references).

[Critical context: We can’t resist highlighting Amazon’s surprisingly jingoistic statement — particularly coming from the company that refused to roll over for the feds in 2007, to cite just one example.

At the time, federal prosecutors attempted to subpoena the records of 24,000 Amazon customers when making a fraud and tax-evasion case against Robert D’Angelo, a city employee of Madison, Wisconsin.

Prosecutors suspected these customers might have unwittingly bought used books from D’Angelo, an Amazon seller who operated a private business out of his municipal office. On “company” time, courtesy of taxpayers. Of course, D’Angelo running afoul of the IRS is what really put him on the government’s radar. Gets ’em every time.

A federal judge sided with Amazon, ruling the company was within its rights to withhold customer information on the basis of First Amendment protections. In fact, Judge Stephen Crocker said the government having access to citizens’ book purchases was unconstitutional. 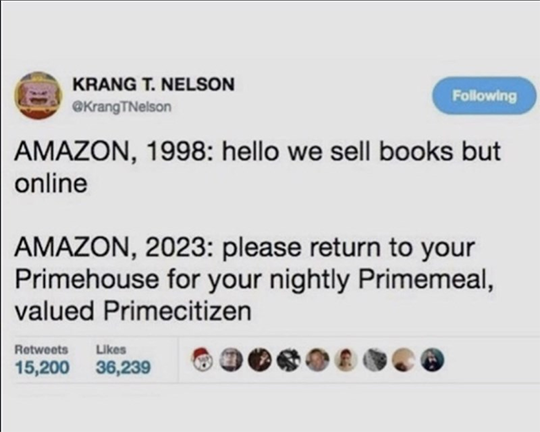 Simpler times… and a dystopian future?

Further, in his June 2007 decision, Judge Crocker noted “the chilling effect on e-commerce” that “would frost keyboards across America” should Amazon play ball with the federal government.

Speaking of commerce, the Amazon Web Services (AWS) division — which generated more than $25 billion in revenue in 2018 — seemed like a lock for the JEDI contract until other U.S. companies claimed the bidding process was unfair.

“And we’re getting tremendous, really, complaints from other companies, and from great companies. Some of the greatest companies in the world are complaining about it.”

Specifically, Oracle, IBM and Microsoft… with Oracle in particular protesting to the Government Accountability Office on two occasions about Amazon’s bid.

For now, the JEDI contract is under review, but Amazon’s still going to the mattresses for it.

“From day one,” an Amazon spokesperson groused at MIT Technology Review, “we’ve competed for JEDI on the breadth and depth of our services and their corresponding security and operational performance.”

Beyond the equity (or inequity) of the government’s bidding process for the JEDI contract, what’s the danger of putting the Pentagon’s IT infrastructure in the capable hands of pros at AWS? I mean, what could possibly go wrong?!

According to MIT Technology Review: “If observers and critics are right, the Pentagon JEDI contract is just a stepping stone for Amazon to eventually take over the entire government cloud, serving as the data storage hub for everything from criminal records to tax audits.”

“If that concerns some of those on the outside looking in, it’s business as usual… where the government has always been the biggest, and most lucrative, customer.”

No to mention — in this winner-takes-all contest for corporate wealth and power — where’s the accountability?

Steve Aftergood, who runs the Project on Government Secrecy at the Federation of American Scientists, says: “We seem to be racing toward a new configuration of government and industry without having fully thought through all of the implications. And some of those implications may not be entirely foreseeable.

“But any time you establish a new concentration of power and influence, you also need to create some countervailing structure that will have the authority and the ability to perform effective oversight.

“Up to now, that oversight structure doesn’t seem to [be] getting the attention it deserves,” Mr. Aftergood concludes.

Orwellian, I think, is the word you’re searching for…

It’s not a stretch to wonder what’s next for mega-corporations like Amazon that, just over a decade ago, resisted the federal government in defense of privacy.

Now? Amazon wants to be the deep state’s vendor of choice.

Just in terms of the internet, George predicted its bandwidth would mean the end of television; today, however, his focus is on web security.

To George’s way of thinking: “Security companies chiefly supply a post-hack vision; they tell you whether you have been breached. They don’t stop breaches.

“All of these sensitive networks must be anchored in an immutable time-stamped ground state.” George says: “The question is: Can our computer architectures be rendered unhackable?

“The answer is yes, that is what crypto and blockchain do… they indelibly document the record of the network and evidence of any intrusions.”

George’s conclusion: “In the process of restoring integrity to information systems, we can provide a firm foundation for an information age and internet architecture for civilized societies with real property rights and appropriate privacy.”

Because tomorrow evening, America’s No. 1 futurist, George Gilder, is going LIVE with his biggest event to date…

2… BIG Giveaways, Including a Cash Prize.

1… Stock to Make YOU a Millionaire.

The lone economic number of the day is our first snapshot of how the economy is doing in October, and it’s somewhat surprising…

The Federal Reserve’s Empire State survey shows manufacturing in New York state is up over last month, coming in at 4 and exceeding economists’ expectations of 0.8.

New orders remained flat at 3.5, while shipments inched up seven points to 13 after falling to their lowest level in nearly three years.

Earnings season officially kicks off today, with JPMorgan among the first companies to release financials this afternoon. (More on earnings below.)

Our income expert Zach Scheidt says: “You should love earnings season because this is when you get the best information on how… companies are performing.”

And while the reasons investors buy and sell stocks vary, one of the biggest drivers is earnings. “This is exactly what makes earnings season so important,” Zach notes.

It’s also a time when markets react at lightning speed: Share prices can spike and just as quickly plunge based on Wall Street beats and misses.

“People like you and me usually buy a few dozen to a few hundred shares of a particular stock at a depending on the price,” he says. “That means we don’t quite have the power to move stock prices too much.

“The professionals on Wall Street, however, are buying thousands to millions of shares of select stocks at a time.” Now that’s market-moving.

And that’s exactly why Zach says study the “smart money” folks as they accrue their stock positions. “After all, when I say Wall Street investment banks are buying thousands to millions of shares at a time, I’m not saying they’re buying them all at once.

“I’m saying that these large positions are usually secured over weeks and months of steady buying,” he says. “This should give you ample time to secure your much smaller position and profit as their demand naturally pushes prices higher.

“To accomplish this strategy,” Zach says, “I recommend keeping an eye out for two specific types of companies this earnings season as they report…”

First, trend-confirmed companies… “are riding a strong trend higher already, and Wall Street is watching eagerly to see if the trend will continue.”

To wit, Zach says Walmart (WMT) and Visa (V) both fit the profile. Walmart, for example, hasn’t caved to the e-commerce trend like some other brick-and-mortar retailers; in fact, Walmart’s successfully joined the e-commerce ranks. And Visa’s riding high on the cashless wave.

“If these companies report strong earnings,” Zach says, “look for their stock prices to move even higher in the weeks following as Wall Street adds to their positions.”

Next, turnaround companies include struggling stocks that execs and analysts expect to stage a comeback.

“Remember,” Zach says, “earnings reports don’t just include hard-to-read financial numbers. Company executives also give commentary regarding their company’s results and how they expect the company to perform in the future.

“These comments can be critical,” he continues. “Turnaround companies that I’m looking at today include Boeing (BA) as they recover from the 737 MAX crisis and Charles Schwab (SCHW) as they continue pivoting their business model after dropping commissions to $0.”

Zach says: “These are just a handful of the companies that I’ll be watching over the coming days.

“As an investor,” he says, “you should really love earnings season because it usually determines how your stocks will perform in the weeks and months ahead.”

As for The 5’s unofficial/official caption contest for a pic of Paulson, Bernanke and Geithner, a longtime reader from Idaho suggests: “Larry, Curly and Moe?”

On top of that, he’s giving away two extremely valuable things that you can only receive after you’ve signed into the live event.

We will send you an email tomorrow when George goes live.