There’s an old saying in markets about how “nobody rings a bell at the top.” It’s not entirely true.

“Sometimes,” wrote our Jim Rickards five years ago, “the global power elites do ring a bell. But they ring it for the wealthiest and most powerful individuals only. Everyday investors like you are not intended to hear it.”

The warnings come in the form of reports from outfits like the International Monetary Fund and the Bank for International Settlements. They’re written “in highly technical language and are read by only a relatively small number of expert analysts,” Jim said.

“Some of these reports may be picked up and mentioned briefly in the press, but they don’t make the front pages. For you, such pronouncements are just more financial noise in a flood of information that washes over you every day on TV, radio, the Web, in newspapers and in other publications.

“The power elite are not signaling you — they are signaling each other.”

Which brings us to the annual Global Financial Stability Report just issued by the IMF.

In the sterile style that’s customary to these reports, here’s the takeaway: “Accommodative monetary policy is supporting the economy in the near term, but easy financial conditions are encouraging financial risk-taking and are fueling a further buildup of vulnerabilities in some sectors and countries.”

Here’s our real-world translation: “A decade of near-zero interest rates and other lunatic policies is pushing even the most conservative investors to take insane levels of risk. It’s gonna blow up.”

One of the few members of the press to pick up on the report is Ambrose Evans-Pritchard of the London Telegraph. His summation: “The world’s financial system is more stretched, unstable and dangerous than it was on the eve of the Lehman crisis.”

The Telegraph’s Twitter feed chose to illustrate its link to the story with an image of Christine Lagarde — who recently jumped out of the frying pan of the IMF into the fire of the European Central Bank. Heh… 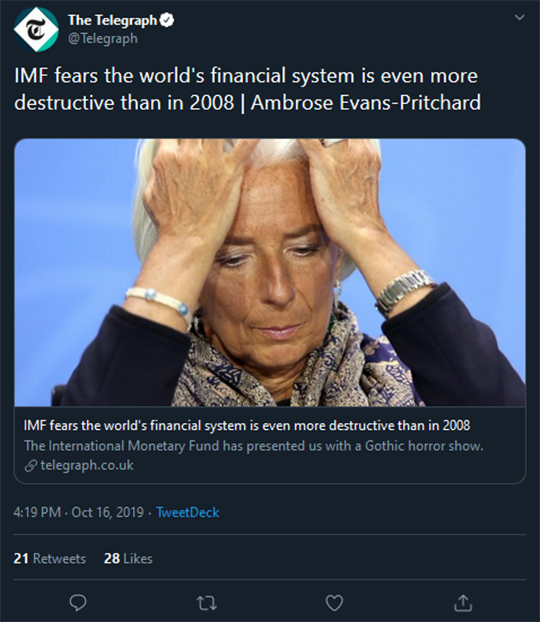 Here’s a plain-English line from the report: “The search for yield among institutional investors — such as insurance companies, asset managers and pension funds — has led them to take on riskier and less-liquid securities. These exposures may act as an amplifier of shocks.”

Pension funds and insurance companies aren’t supposed to have a “go big or go home” mentality with their investments. After all, this is money that retirees and beneficiaries are counting on. But when conservative fixed-income investments yield next to nothing, what choice do these investors have?

And so you’ve got state and local government pension funds plunging into illiquid assets like real estate and private equity — assets that can’t be unloaded quickly in a pinch.

“Pension funds and insurers that used to act as a stabilizing buffer in financial crises are now part of the problem,” Evans-Pritchard writes, “and might next time join the panic rush for narrow exits. The IMF says this could amplify any shock very quickly and this in turn would lead to a full-blown credit crunch.”

Meanwhile, the report says almost 40% of corporate debt worldwide is at risk of default.

We’ve been warning all year about the risks looming in corporate debt. But we didn’t realize they’re this severe.

The report zeroes in on something called “debt-at-risk” — in which the debtors don’t earn enough to cover the interest owed. The IMF calculates that in the event of a financial shock only half the intensity of 2007–09, debt-at-risk would swell to $19 trillion — or about 40% of all corporate debt.

“In France and Spain,” says the report, “debt-at-risk is approaching the levels seen during previous crises; while in China, the United Kingdom and the United States, it exceeds these levels.”

As a reminder, one-third of all U.S. corporate debt is already rated junk — too risky to be considered “investment grade.”

And half of the investment-grade debt is rated BBB — one notch above junk. “Such firms,” Evans-Pritchard sums up, “will be squeezed mercilessly by tumbling earnings and soaring risk spreads in a downturn.”

Dire as this sounds, it does not alter the outlook we’ve shared in recent days — a recession is not nigh.

That’s the assessment of none other than our Jim Rickards — often maligned in the mainstream as a doom-and-gloomer.

As he’s been keen to remind us, financial panics and recessions don’t always go together — it just seems like it because 2008 is still fairly fresh in the memory.

But there was no recession with the stock market crash of 1987, the Mexican peso crisis of 1994 or the Russian default of 1998.

Jim’s models point to no recession now — even if the IMF’s forecasts turn out to be right.

In the meantime, we’ll stay alert for signs of anything that would merit protective measures for your portfolio.

Markets are quiet today — the major U.S. stock indexes barely in the green as we write. Gold is likewise little moved at $1,490.

Among the big movers today is Netflix — up 3.6%. NFLX whiffed on its global subscriber-growth target for a second straight quarter, but traders are taking heart that at least its U.S. subscriber base isn’t shrinking.

“Despite the post-earnings excitement,” says chart hound Greg Guenthner, “there’s still work to be done to repair the damage from the stock’s recent 30% slide.”

In the currency markets, the British pound jumped 1% this morning after news that the U.K. government and the European Union have come to terms on a Brexit agreement. Then everyone realized the deal still has to be approved by Parliament, which is anything but a slam-dunk. At last check, the pound has given up nearly all those gains at $1.285.

The day’s economic numbers are a mixed bag…

The housing figures affirm yesterday’s homebuilder sentiment numbers, which are the best since early 2018. ITB, the big homebuilder ETF, is up 18% in less than three months… and 50% year to date.

Today marks the start of a new catalyst for Canadian cannabis stocks.

While marijuana has been legal in the Great White North for more than a year now, that has applied only to dried cannabis flower and oils derived from that flower.

Topicals? Edibles? Beverages? All verboten, along with other extract products — until today.

Thus, “well-established Canadian companies will have the opportunity to carve out huge shares of a brand-new market,” says our penny pot stock authority Ray Blanco — a $3.1 billion market, as estimated by Deloitte.

“Additionally,” says Ray, “Deloitte notes consumer spending on other areas (edibles, etc.) will not cannibalize flower profits, as it is expected that edibles and extracts will bring in a swath of new consumers who were previously on the fence.”

Ray says the conservative way to play it is Canopy Growth Corp. (CGC) — which has been sinking for close to six months but is set for a rebound. “CGC could now present an opportunity to get back in at ground-floor prices before the next surge,” he tells us.

For a higher-risk and much higher-reward proposition in the pot space, Ray directs your attention here. He says it could be worth a $1.4 million fortune to you.

Meanwhile, a different kind of mind-altering substance faces its own special date tomorrow.

That’s when a host of 25% U.S. tariffs take effect on European goods — including single-malt Scotch. (Go figure, the blended stuff is exempt.)

“We’ve just air freighted a shipment to get there just prior to the deadline,” Anthony Wills tells the Financial Times. Wills is the founder of the Kilchoman distillery on the island of Islay. Shipping by air is double the cost of shipping by sea… but since it adds “only” 10% to the overall cost, he still comes out ahead.

“While the scale of the whisky airlift could not be established,” says the FT, “industry data show that producers have also been accelerating sea shipments. About 1,300 20-foot equivalent units arrived in the U.S. in September, according to figures from Panjiva, about a quarter more than the previous month and a fifth more than in the same period last year.”

Hmmm… Your editor certainly hopes his favorite lakeshore hangout beat the rush and stocked up on the Octomore. (The peatier the better, I say…)

To the mailbag, where a reader did a double-take after something we noted parenthetically yesterday…

“Was reading your take on Jamie Dimon’s prediction of a coming recession until I came to the part about the retail sales figures ‘factoring out volatile auto sales and falling gasoline prices.’

“HELLO…….. there’s a West Coast out there! Gasoline prices here in Killafornia are approaching $5.00 per gallon where they can tighten their grip around the consumer’s throat.

“The rest of us, with a brain, are paying $4.45–4.65 depending on the grade. All this despite the fact that oil prices are $4 a barrel less now than in December 2018 when gas (on the Left Coast) was well under $4 a gallon. Who is screwing whom at our expense?”

The 5: Well, as we noted a few weeks ago, California vaulted over Pennsylvania this summer for the distinction of having the highest gasoline taxes in the country. Total state taxes and fees are now 61.2 cents a gallon.

We’ve seen a handful of articles in recent days about people for whom PG&E’s planned power outage was the last straw and they’re finally ready to pull up stakes and leave the Golden State. Surely the gas taxes are another contributing factor…

“I take exception to the denigration of the nephews of Donald Duck!” a reader writes as our not-really-a-caption-contest takes an unexpected turn.

“As I recall from the comics I read, they were forever consulting the Junior Woodchuck Manual to come up with solutions to Uncle Donald’s problems and they always foiled the Beagle Boys in their attempts to steal from Uncle Scrooge’s Money Bin. Calling those buffoons Huey, Dewey and Louie would be a travesty and an insult to intelligent people.”

Adds another: “I bet that the reader who described Huey, Dewey and Louie as ‘clueless’ had only seen them in DuckTales or other cartoons.

“As I imagine you know, in the Carl Barks comics they were the voice of reason. There was a lot going on in those comics: for instance, the depiction of Scrooge as a money addict.

“Which may have some relevance today: Do all these super-rich really need so much money? Or is the Forbes 400 list encouraging a competition, much like Scrooge’s with Flintheart Glomgold back in the day?

The 5: You reminded us that Saudi Arabia’s playboy billionaire Prince Alwaleed bin Talal once sued Forbes for lowballing his net worth on Forbes’ billionaires list.

He filed the suit in Britain, whose libel laws have a lower standard of proof. The case dragged on for two years before the two sides settled the case — on terms neither party would disclose.

P.S. For a limited time, one of our publishers is offering 500 Instant Rebate “Checks” to any reader who responds.

And even if not all the checks are claimed — unlikely, but you never know — the deal comes off the table tomorrow night at midnight. Click here to claim yours.