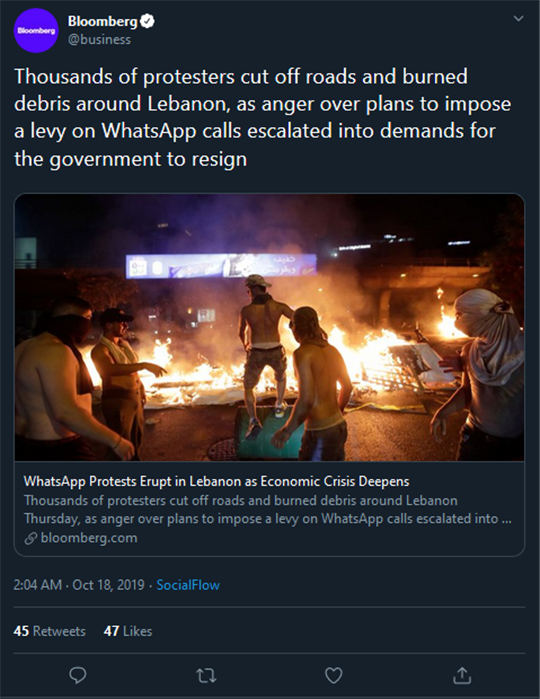 What a simplistic — and patronizing — take. And it’s all over U.S. media this morning. “Look at those wacky third-worlders rioting over a tax on their WhatsApp usage!”

It doesn’t take much digging to find the real story. The proposed tax covers all internet-based phone calls — WhatsApp, FaceTime and the rest. At 20 cents a day, it equals 1.33% of Lebanon’s minimum wage.

The tax is just the tipping point for a much wider frustration: “So much discontent over decades of corruption, economic stagnation and decline and a political elite that enriched itself while the country crumbles,” tweets the Lebanese-American journalist Rania Khalek, currently living in Beirut.

There you go. Context. But for U.S. journalists, the economic pain of 6 million Lebanese is merely grist for their relentless pursuit of pageviews and Nielsen numbers.

“As one TV producer put it to me in the ’90s, ‘The entire effect we’re after is, “Isn’t that weird?”’” writes Rolling Stone journalist Matt Taibbi in his new book Hate Inc.: Why Today’s Media Makes Us Despise One Another (highly recommended).

“Did you hear about that guy in Michigan who refused to mow his lawn even when the town ordered him to? Weird! And how about that drive-thru condom store that opened in Cranston, Rhode Island? What a trip! And hey, what happened in the O.J. trial today? That Kato Kaelin is really a doof! And I love that lawyer who wears a suede jacket! He looks like a cowboy!”

For the media and the power elite that controls them… a nonstop parade of stories like “WhatsApp riots” are an outstanding distraction from our own country’s experience with — to borrow Ms. Khalek’s words — “decades of corruption, economic stagnation and decline and a political elite that enriched itself while the country crumbles.”

The “WhatsApp riots” are also a useful distraction from the Federal Reserve’s ongoing bailout of someone in the banking system — who, and for what reason, we still don’t know.

Yesterday the New York Fed conjured $104.5 billion into existence to yet again shore up the “repo” market in which big banks and hedge funds borrow for their daily trading. It’s a continuation of a rescue that began just over a month ago, aiming to keep a lid on the repo interest rate.

Which Wall Street firm or firms are getting this money, and why they need it, remains a mystery. Media outlets aren’t suing for access to the information, and Congress hasn’t scheduled hearings even though the Fed says this effort is not a one-off and will continue into the new year.

What we do know is the Fed’s balance sheet has swelled to nearly $4 trillion again. But don’t call it quantitative easing!

Moving on, let’s tackle an allegation of market manipulation... 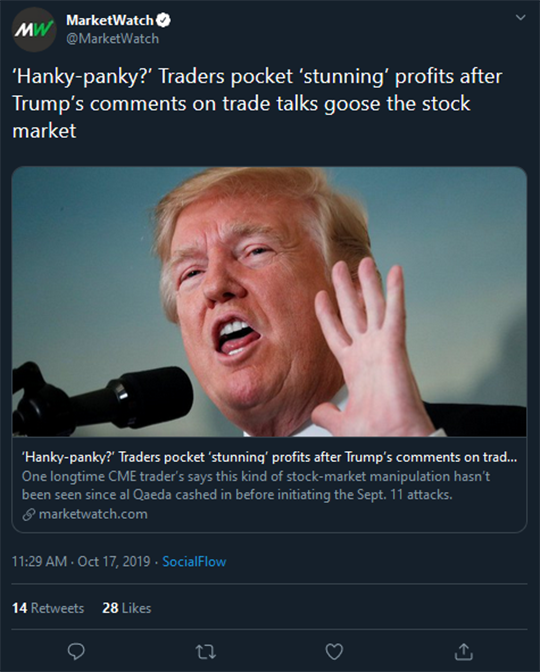 Vanity Fair has published a lengthy article exploring futures trades this year that were “fantastically profitable” for those who managed to position themselves ahead of various Trump tweets and statements.

In one instance, someone or a group of someones bought 420,000 September e-minis (a type of futures contract on the S&P 500 index) shortly before the close on Friday, June 28 — about 40% of the total trading volume. That weekend, the president announced talks with China were “back on track.” The S&P rallied Monday morning, generating a $1.8 billion profit.

“Are the people behind these trades incredibly lucky, or do they have access to information that other people don’t have about, say, Trump’s or Beijing’s latest thinking on the trade war or any other of a number of ways that Trump is able to move the markets through his tweeting or slips of the tongue?” writes Vanity Fair’s William D. Cohan. “Essentially, do they have inside information?”

One market insider alleged to Cohan — anonymously — that the manipulation is the most outrageous since the options bets against American and United Airlines in the days before the Sept. 11 attacks in 2001.

Alas, Cohan’s evidence is frustratingly circumstantial. There’s no “smoking gun.” For its part, the Chicago Mercantile Exchange tells Cohan the trades didn’t originate from a “single source” and finds them of “no concern.”

“Guys on the floor have been talking about it for months,” says Alan Knuckman, our eyes and ears in the Chicago trading pits.

“Someone has to be tipped to Trump texts before they go out. Obviously e-minis provide the payoff with huge leverage.”

Our Jim Rickards is more skeptical — and we consult him because he wrote extensively about those pre-Sept. 11 trades in his book The Death of Money.

“The possibility of insider trading cannot be ruled out,” Jim tells us. But in his view, the endless drumbeat of headlines surrounding the trade war and Fed policy creates an up-down dynamic that’s easy to trade profitably.

This morning, Democrats in Congress promise to refer the matter to the Securities and Exchange Commission. It seems even the financial markets are becoming a political football these days.

[5 Min. flashback: Jim’s mention of the Fed reminds us of a leak scandal a few years ago that took down the president of a regional Fed bank. But to this day, the actual leaker has never been identified and we don’t know if anyone traded on those leaks for profit. No one, it seems, wants to look very closely. Here’s our writeup on the case before everyone sent it down the memory hole.]

No tweets or dramatic headlines on this trading day — just a stock market that’s down modestly and gold continuing to tread water at $1,491.

Earnings season rolls on, with about 10% of S&P 500 companies reporting so far and most of them delivering “beats.” The standout report this morning is from Coca-Cola; its rising sales point to a successful pivot toward less sugary drinks, coffee beverages and smaller cans. KO is up nearly 3% as we write.

The only economic number of note is the Conference Board’s leading economic indicators — down 0.1% for September, thanks to weakness in manufacturing. But the index still points to a growing economy going into 2020, just not at a breakneck pace.

Senior citizen alert: The IRS is developing a new 1040 form just for you.

Under a budget law passed last year, the IRS has been busy drawing up a “simplified” tax form for the over-65 set. It’s called Form 1040-SR.

“The new form features large print and simplified boxes,” says our retirement specialist Beau Henderson, “as well as detailed instructions for calculating the taxable portion of your Social Security benefits. It also makes it easier to figure out the added deductions available for taxpayers ages 65 and older and/or the blind.”

To Beau, the new form resembles the now-defunct 1040-EZ — with a crucial difference. The 1040-SR does give you the option of itemizing deductions. You’d just have to fill out a Schedule A, as you would with the regular 1040.

Not everyone can use the 1040-SR. For one thing, there’s the 65-and-over age requirement. For another, “you will need to use the full 1040 if you own a small business,” Beau says, “as well as a Schedule C to show profits and losses.

“While not a perfect solution for every retiree, the 1040-SR does provide a simpler solution to tax-filing for many — especially if you’re receiving the bulk of your income from investment sources and Social Security.”

The form isn’t final yet, but it should be ready in time for the 2019 filing season early next year.

What the tax cuts giveth, tariffs taketh away. Or so we conclude from research by The Tax Foundation.

As noted here yesterday, new U.S. tariffs on goods from the European Union kick in today — 10% on aircraft and 25% on agricultural and other products.

The Tax Foundation reckons that tariffs overall have cost Americans $87 billion so far. To be clear, that doesn’t necessarily mean you’re paying higher prices for consumer goods; in some cases, importers are choosing to eat those costs and take the hit to their margins because passing along those costs to you would do longer-term damage.

In any event, $87 billion amounts to a 0.66% reduction in GDP. Meanwhile, The Tax Foundation figures the 2017 tax law generates a 1.7% boost to GDP. So the tariffs have effectively wiped out about 40% of the tax cut’s benefits… 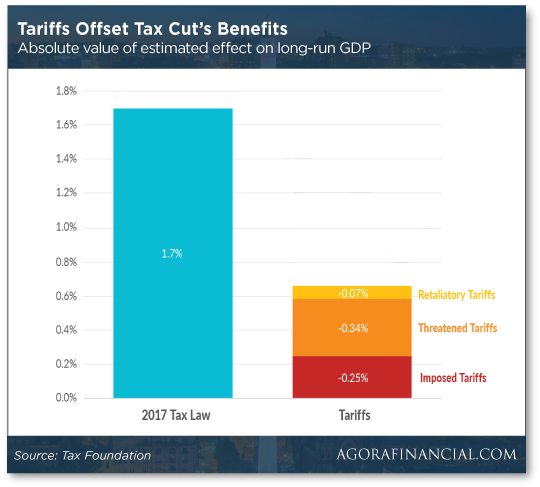 Granted, GDP is itself a slippery number — a statistical abstraction that has little bearing on your life or your standard of living. But this estimate of the relative impacts of the tax cuts and the tariffs rings true…

“I, too, enjoy a heavily peated single malt,” a reader writes after we explored one impact of the new tariffs on Europe yesterday.

“I hadn’t heard of Octomore. I’ll try to pick up a bottle before the prices go up. My peat monster of choice is Laphroaig. Drives the wife right out of the room when I’m savoring a dram.”

“$5 per gallon gas in California sounded terrible, so I did some quick math,” a reader writes from north of the border.

“That is roughly $0.98 per liter Canadian. I live in Alberta and I am very happy to be paying that now where I live. It was about 25% more with our previous government’s carbon tax.

“If Trudeau wins the election on Monday, we will be paying at least 25% more. In neighboring British Columbia, I think they pay about $1.50-plus in the lower mainland. Canada’s very own ‘Left Coast.’

“Meanwhile, on another recent topic, I grew up reading Donald Duck comics. Huey, Dewey and Louie were very intelligent and always saved the day.”

The 5: Of course you just reminded me I failed to wish our Canadian readers a Happy Thanksgiving this past Monday. I’ll do better next year…

P.S. I can’t promise you $1.8 billion in gains front-running Trump tweets… but I am privy to some critical market information in which corporate insiders tip their hand about big news before it goes public.

I’ll show you exactly how the system works as soon as you follow this link. No big-time commitment here — I promise you’ll know after just one minute and 21 seconds whether this is for you.