“Bette was 62 and still working when she lost her husband, Eric,” says our retirement specialist Beau Henderson.

“Eric had waited until his 70th birthday to start collecting his Social Security checks — so his benefit had been bringing in $2,150 a month,” Beau continues.

“Losing that money would put a huge dent in Bette’s household income… and she knew she was entitled to Social Security survivor benefits.

Beau says: “Bette wanted her retirement benefit to keep growing until her full retirement age… and based on a website she had visited, she thought she was too young to restrict her application.” 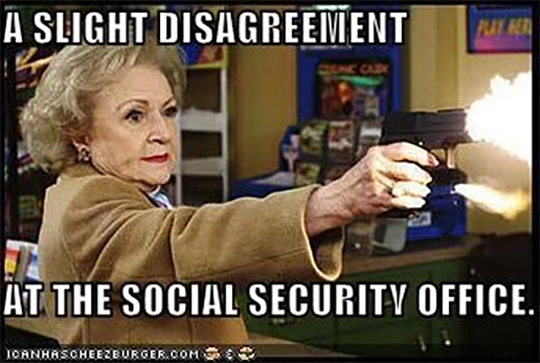 Different Betty… but you understand the frustration.

While “Congress largely ended restricted applications for anyone under the age of 66 — meaning when you apply for one Social Security benefit, you are deemed to have applied for them all…

“[Bette] could have still collected her full benefit exactly as scheduled,” says Beau.

(Or she could employ another Social Security strategy to work to her advantage. More on that later.)

“Here’s how to avoid [Bette’s] mistake and squeeze every last dollar from ALL of your benefits.”

Beau says: “Survivor benefits are probably the most important aspect of Social Security that you don’t want to think about.”

Not many of us are keen on thinking about our own demise, much less the loss of a spouse. But it’s simply a fact of life: According to the 2010 U.S. Census, there were over 11 million widows versus 3 million widowers counted. And roughly 700,000 women are widowed each year.

“But proper retirement planning includes contingencies for worst-case scenarios,” Beau says, “and the sad fact is that survivor benefits might be all that separate the still-living spouse from a financial tragedy on top of the emotional one.

“So you and your spouse should discuss Social Security’s survivor benefits now. The basic rules are pretty simple.

“To qualify, widows and widowers need to be at least 60 years old (or 50 if legally disabled),” Beau says. “They also must have been married for nine months or more to the person who passed away.”

Plus, the deceased spouse “must have worked long enough to have been eligible for Social Security retirement benefits of [his or her] own.”

However, it’s not necessary for the spouse to have started claiming benefits prior to passing.

Beau continues, “How much you can receive depends on a couple of factors…

“If [spouses] started collecting their retirement benefits before they reached full retirement age,” says Beau, “they were receiving a reduced benefit — which will be used to calculate how much the surviving spouse gets.

Beau says: “The second-biggest [factor determining] how much you are eligible to receive each month is when you apply for your benefits.

“Filing before your full retirement age reduces the amount of your check.

On the other hand, Beau notes: “There are no deferred credits… so you don’t earn any more money by waiting past your full retirement age” (emphasis added).

“So you’d think the smart thing to do would be to put off applying for survivor benefits until full retirement age — waiting until you can collect the full amount you’re entitled to,” Beau says. Instead, you have a couple options…

“If you’re entitled to a retirement benefit of your own,” says Beau, “you can restrict your application for Social Security survivor benefits — no matter when you were born.

“In other words, you can file for the survivor benefits… letting your retirement benefits grow until you reach full retirement age or beyond.”

Another alternative? “You can file for your retirement benefit first,” Beau says, “letting the survivor benefit grow until you reach full retirement age.”

Now, there are a couple important caveats…

Just to put a pin in it, according to the Social Security Administration’s website: “If you turn 62 before Jan. 2, 2016, deemed filing rules will not apply if you file at FRA (full retirement age) or later.

“This means that you may file for either your spouse’s benefit or your retirement benefit without being required or ‘deemed’ to file for the other.

“In your case, you may also restrict your application to apply only for spouse’s benefits and delay filing for your own retirement in order to earn delayed retirement credits” (emphasis added).

Back to Bette: “Unfortunately, she didn’t know she could use a restricted application to apply for survivor benefits,” Beau says. In other words, Bette was eligible to restrict her Social Security application to only one benefit type.

“She could have collected that money right up until she turned 66, when she could have then applied for her full retirement benefit. That’s $1,735.05 she missed out on every month for four years — a total of $83,282.40!

“Heartbreaking,” says Beau, “and it’s more common than you would believe.

“It’s yet another reason I stress planning your filing strategy now, so you don’t make similar mistakes that cost you money.”

A quick rule of thumb: “If the amount you’d receive in survivor benefits is about the same as your retirement benefit, you should take the survivor benefit as soon as possible.

“Yes, the survivor benefit is going to be reduced because you’re taking it early,” Beau says. “But you can collect that benefit from age 60 to age 70, while your own retirement benefit continues to grow.

“Then when you turn age 70, you can switch over to claiming your own, now larger, benefit amount.”

If, on the other hand, “your own benefit is small compared with the survivor benefit, you should take your own (reduced) benefit at age 62.

“If you take that route, you should switch over to the survivor benefit at full retirement age, because it will not grow any larger at that point,” says Beau. “But it will have grown enough to offer you a higher benefit than the retirement benefit you’re receiving.”

Beau concludes: “Again, it’s better to figure this all out now, before life forces you to deal with it.

“Then you’ll be ready when the time comes.”

[Ed. note: Your FREE Retirement Box is ready to be claimed… Inside, you’ll learn how to:

✓ Add ‘five words’ to your Social Security application form and get up to an extra $1,000 every month. Over and above what the SSA will send you! (Page 68)

✓ Beat the Social Security roulette’s “96:1 odds” so that you or your spouse do not get the short end of the stick … And more!

Our supplies are limited, however; so if you’re retired, or approaching retirement… you’ll need to hurry.

The contents in the box could help you get up to an EXTRA $1,000 in your Social Security every month..

Yes, I want It! Click the link to learn how to claim your Retirement Box.]

As for flagship crypto bitcoin, it’s back above its $8,000 resistance level today.

Turning to the bond market, we take a look at highly questionable bond ratings… and the effect on the economy’s long-term outlook.

It was status quo in terms of its bond rating, however, for Newell, maker of Rubbermaid containers, Elmer’s glue and Sharpies.

“When S&P and Moody’s made their upbeat projections in 2018, they made an error that understated Newell’s indebtedness,” says WSJ. “They have since fixed their numbers, but still rate Newell investment-grade.”

Newell is hardly unique, either. While corporate borrowing has ballooned in 2019 — something The 5’s been following closely — bond-rating companies been giving a pass to some of the biggest offenders… er, borrowers… like struggling consumer staples Kraft Heinz and Campbell Soup.

“There’s definitely some ratings inflation,” says Greg Haendel of Tortoise, a firm that handles over $1 billion in corporate bonds.

“It’s pretty eye-popping… to see how much more leverage a number of these companies can incur with the same credit rating,” Mr. Haendel says.

In defense of their rating methodology: “Moody’s and S&P say their ratings are accurate because companies like Newell have solid, global brands and generate sufficient cash flow to pay off the bonds,” WSJ says.

Newell, Kraft and Campbell’s, for instance, are all rated in the triple-B category — the lowest category before dropping into junk bond territory. (And we’re guessing a rating these companies are clawing to hold onto.)

The upshot? “Investors and analysts have told the Securities and Exchange Commission that they are concerned about the buildup of triple-B debt…

“The buildup has fueled one of the most divisive debates on Wall Street,” says WSJ. “Have low interest rates made… borrowing more manageable?” Or “Will higher debt loads cause big losses when the economy turns?”

An eagle-eyed reader spotted a mistake and — this it wasn’t on us: “I hate to dump on a fellow Canuck, but… the person quoted at The 5 [Friday] needs to work on their basic math a bit.

“As it happens, the specified US$5 per gallon for California fuel works out, in Canadian funds, to around C$1.73 per liter, not C$0.98, based on using 1.313 for the exchange rate (see calculations below).

“For what it’s worth, I think the comment about paying C$1.50 per liter in B.C. is fairly accurate. (I’m also in Alberta and haven’t asked my brother-in-law recently what he’s paying, so I’m not going to be too definite about that one.)

“P.S. Thanks for the belated Thanksgiving wishes. Hope you had a good Columbus Day.”

And how’s this for a mea culpa? “Sorry, Dave, for my bad math.

“I realized I was wrong as soon as I read it. $5 per gallon U.S. isn’t about $0.98 Canadian even using imperial gallons.

“Californians pay a lot more for their fuel. My apologies to all. I’ll keep my bad math to myself from now on, promise.

“Have a great week!”

P.S. There’s a Social Security “reset” many American retirees are not aware of.

And it can help maximize your Social Security benefits if you already filed but aren’t confident you are getting everything you deserve.

If you take advantage of the “reset” in time, in some rare cases, you could use these strategies and increase YOUR lifetime benefit payouts by as much as $340,000

Click here for the full details on this urgent opportunity.