“Has anyone else noticed that all the impeachment noise may well be keeping Congress and the American people from paying much attention to the Fed and their repo activities?” writes a reader who belongs to our elite Platinum Reserve.

“I find it at least curious that House Speaker Nancy Pelosi publicly backed impeachment proceedings just a few days after the Fed opened its repo window — and about the same time that they announced the rescue would be ongoing. This is the sort of thing that would normally result in congressional hearings, but not now.

“The timing of these two events seems suspicious, although I have no further information to confirm it. Yes, this falls in the ‘conspiracy theory’ camp, but…”

The reader leaves the thought dangling there. We’ll complete his sentence: “… with zero transparency or disclosure by the Fed, and no pushback from Congress or the media, the theory is as plausible as any other.”

The financial media’s negligence with this story borders on the criminal.

Granted, it’s not a sexy story. It’s boring and complicated. Every time, you’ve got to explain what the repo market is in the first place. (We’ll do so again momentarily with the help of an old friend.)

Worst of all from the media’s standpoint nowadays, the story has no Donald Trump angle to generate clicks. He’s neither hero nor villain in this saga. He’s not even a bit player. So it gets buried amid whatever we’re told is the new scandal of the hour.

Meanwhile, certain enclaves of the “alternative” financial media — the ones that merely bloviate and don’t actually have readers counting on them for guidance to preserve and grow their wealth — spin wild theories all day.

Which leaves the likes of us at Agora Financial in a bind: All we can do is stick to the facts and follow the breadcrumbs, unsure where they’ll lead.

First, a reminder of what repos are — courtesy of Chuck Butler, editor of the venerable Daily Pfennig e-letter and longtime friend of The 5.

Chuck was dealing with repos on a trading desk nearly 40 years ago, so he knows them well.

“Let’s say we have Bank A, and on any given day, they may need cash to make certain that they have the proper reserve requirements or whatever. They can go to the repo market and there find another bank to lend them the cash for that day.

“In return Bank A sends them collateral, which is usually Treasuries, since they can move so easily through the Fed system that every bank has a bond department in their back office.

“And then the next day the lending bank sends the bonds back to Bank A, namely the principal plus interest, and the trade is done. Bank A ‘repurchases their bonds.’ Thus the shortened ‘repo market.’

“What happened last month was that a few banks came to the repo market and found no one would lend them money at the usual 2% rate. The lenders wanted 5%, 6%, 7%, 8%, 9% and 10% for these overnight loans, and the banks that needed the cash took them.

“Well, this freaked out the Fed, and the next day they interjected liquidity in the form of tens of billions of dollars. This had gone on for two weeks when last week the Fed announced that they would buy Treasury bills from these banks that needed cash.

“Now, grant you, this isn’t all-out quantitative easing (QE), but it sure is QE Jr. And that’s where we are today. The Fed is back in the bond-buying business, but we’re not allowed to call it QE!”

Here’s what we know for certain: To date, the Federal Reserve has conjured $197 billion into existence to shore up the repo market.

You can see that reflected on a chart of the Fed’s balance sheet — which is zooming up again at a pace last seen during the waning days of the mega financial crisis in early 2009. 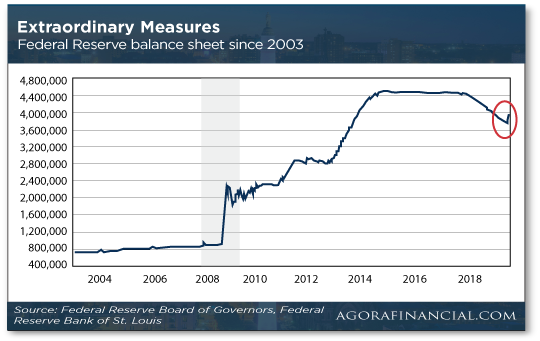 And that’s as of last Thursday; the figure is updated weekly. We’ll be shocked if the total isn’t over $4 trillion in two more days — which is an even faster clip than we were anticipating two weeks ago.

Here’s something else we know for certain: The biggest bank out there believes $197 billion isn’t enough to shore up the system.

From a Bloomberg dispatch yesterday: “JPMorgan Chase & Co. says the money-market stress that sent short-term borrowing rates surging last month is likely to get much worse despite the Federal Reserve’s attempts to inject billions of dollars into the financial system.”

All the stresses that have emerged in the last five weeks? “With year-end coming up,” write the JPM analysts, “this is all likely to get much worse, in our view, before it gets better.”

Hmmm… As we mentioned earlier this month, JPM withdrew $158 billion in cash it had on deposit at the Fed during the first half of 2019 — a 57% drop.

Hard not to think that JPM is, to use an industry expression, “talking its book.”

But beyond that, it all gets murky. We’re stuck with the same questions we’ve posed before: Who’s benefiting from the repo rescue? And why do they need the money?

Back to Chuck Butler:

“And I have one more question: When did the Fed’s mandate change to providing liquidity for Wall Street’s largest banks? Did I miss the memo?

“I’m beside myself right now at the brazen attitude the Fed is taking. They go ‘off road’ to help Wall Street, and they don’t have to tell us who received help.”

And again, Congress and the media have exhibited zero curiosity. No hearings by the House Financial Services Committee or the Senate Banking Committee. No lawsuits by media organizations looking to uncover the truth. (Bloomberg did a fine job in this regard after the Panic of 2008.)

But here we’ll stay curious and vigilant. We’ll stick with the facts and see where they take us. And if the facts dictate something actionable in your portfolio, you’ll be the first to know.

Speaking of underplayed stories about major risks to the financial system that lack a Trump angle… we have a few more things to say about the corporate bond-rating fiasco.

Emily touched on it yesterday: The Wall Street Journal finds that the big bond rating agencies — Moody’s and S&P — are holding off on downgrades of big companies that are deep in debt and managing that debt poorly.

Even the Journal is downplaying the significance of its scoop, putting the story on the front page but “below the fold” as the saying goes. (The big headline was “White House Decisions Test Republican Support for Trump,” because of course.)

We’ve been warning for nearly a year now about the risks posed by corporate debt — specifically that half of the “investment grade” corporate bonds out there are rated BBB — one notch above junk.

We also warned that if those BBB bonds are downgraded to junk, mutual funds and ETFs that hold only investment-grade debt will have to sell those bonds — which could trigger panic selling.

But we also suggested the rating agencies might game the system and hold off on those downgrades… and the Journal’s research finds that’s exactly what’s happening.

The Journal also spotlighted the inevitable conflict of interest: “Investors use rating firms’ research, but companies that issue the bonds pay for the ratings.”

This was the same problem with the infamous mortgage-backed securities that helped bring on the Panic of 2008 — craptastic mortgages with high credit risk bundled into securities the rating firms declared AAA, the highest quality.

The Journal was very careful not to point out that similarity, lest it step on too many toes in the financial industry. Around here, though, we don’t care…

To the markets — where earnings have sent two of the Dow 30 stocks moving in opposite directions.

Procter & Gamble (PG) — a blue chip favorite of our Zach Scheidt — is up more than 3% after beating analyst estimates on both sales and profits. Meanwhile, McDonald’s (MCD) is down more than 3% after delivering a “miss” on profits.

After we went to virtual press yesterday, gold took a tumble — from which it’s not yet recovered. At last check the bid is $1,483.

The only economic number of note is existing home sales — down 2.2% in September, way more than expected. Still, the year-over-year change works out to a 3.9% increase, which is the strongest in 18 months.

“Matt Levine at Bloomberg recently had the best analysis of the ‘insider’ futures trades, so check that out. It’s total nonsense, he says in short.”

The 5: We like Levine a lot; how he manages to maintain employment in the mainstream we’re not quite sure.

Meanwhile, Michael O’Rourke from JonesTrading tells Bloomberg, “Millions of futures contracts trade a day, billions of dollars trade a day, so to make a connection, I feel like it’s very hard to do… To me the [original Vanity Fair] article just speaks more about the national sentiment about the office of the president.”

P.S. Just in: There’s now a Trump angle to the repo rescue! Sort of.

From Bloomberg: “U.S. Sen. Elizabeth Warren waded into last month’s turmoil in short-term funding markets, warning Treasury Secretary Steven Mnuchin not to use the incident as a rationale for weakening post-financial crisis regulations.”

Oh, never mind. She’s not trying to get to the bottom of who’s getting bailed out and why.

She’s just trying to score cheap political points and burnish her cred as a Wall Street nemesis — which was always overblown. But that’s a story for another day…