Best of Both Worlds

“What’s better… a stock with slow, reliable growth, or a risky stock with huge potential?” That’s a common question put to our income specialist Zach Scheidt…

As an investor, it’s probably a question you’ve entertained as well, especially if you’re trying to augment your retirement account.

Can you have it all?

Zach thinks so — a way to invest with “the safety of guaranteed income and the potential for high growth,” he says.

“A [little-used] class of investments — convertible preferred stocks — gives investors a way to lock in reliable income while still having a shot at big investment gains.”

And they’re a favorite investment of billionaire Warren Buffett… 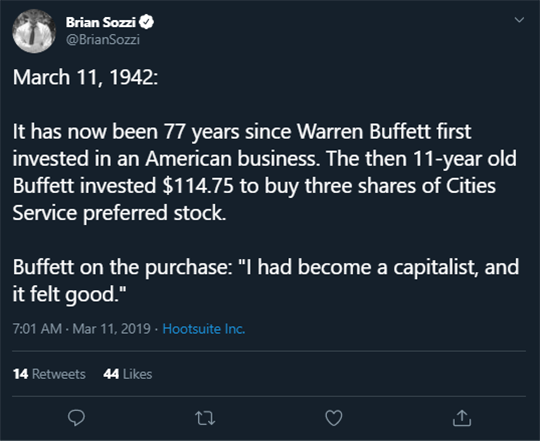 Zach says: “Preferred stocks are typically sold for $25 per share, and they have a quarterly yield attached to them. So just like dividend stocks, these shares pay investors income along the way.

“Unlike dividends, which can be raised or lowered depending on how the company is doing, preferred stocks have a set payment that is agreed upon for the life of that stock.

“And at a certain point in time, most companies have the option to buy these preferred stocks back from investors,” says Zach.

So preferred stocks are reliable and income-generating… but not exactly scintillating. “That is, until you add in the ‘convertible’ part,” Zach says.

Back to Berkshire Hathaway: In 2017, the company exchanged its Bank of America preferred stock for more than $16 billion in common stock, making BoA Berkshire’s second-largest holding — trailing Apple.

Berkshire filed papers with the SEC last week, in fact, since its position represents a 10% stake in Bank of America; in its filing, Buffett’s company promised to be a passive investor… with the caveat that Berkshire be allowed to purchase more Bank of America stock.

And for investors looking to ramp up their retirement accounts, these securities are particularly attractive because if “you own a convertible preferred stock, you’ll get paid reliable income from that position,” says Zach.

Should the company’s common stock take off, convertible preferred stock will do likewise…

offering investors the best of go-go momentum stocks with the certainty of regular income.

Zach says: “A good place to get started with convertible preferred stock is to check out some funds that invest specifically in this category.”

Here are a few he recommends:

“You could consider investing in these funds directly,” says Zach.

Or you can “look up the top holdings in the portfolios of each of these funds. (Just search for the name of the fund and you can find an inventory of all its holdings.)

“You can pick the convertible preferred securities that these funds have vetted and choose… ones that make the most sense for your individual portfolio.”

From there, enjoy the income and watch your gains add up.

[Ed. note: We’re putting out an offer to our readers…

We want to give the first 100 subscribers a generous $557 credit.

And to make it happen, Zach and his team are pulling out all the stops…

While revealing a study that took three years to perfect…

Get the details now… before midnight tomorrow.]

On what’s being called the busiest day of earnings season, the Dow’s down about 75 points to 26,760. Financial headlines tell us Microsoft’s report was stellar… while 3M’s left a lot to be desired.

Perhaps gold’s gains can be attributed to rising expectations of another Fed rate cut next Wednesday. That’s because the monthly durable-goods numbers came in lower than expected. Same goes for “core capital goods” — which exclude aircraft and defense — and provide a better snapshot of the manufacturing sector’s health. Downright anemic…

The likelihood the Fed will drop rates again next Wednesday? A 94% probability, at last check.

Farewell, middle class? According to the SSA wage statistics for 2018, 50% of American workers made just under $33,000 last year.

While only 10% of Americans earned six figures — or more — last year, about two-thirds of American workers brought home about $4,000 per month… That’s before taxes. And according to a UBS survey, 44% of Americans report they “don’t make enough money to cover their expenses.”

Bloomberg says: “Low-income consumers are struggling to make ends meet despite the ‘greatest economy ever,’ and if a recession strikes or the employment cycle continues to decelerate — this could mean the average American with insurmountable debts will likely fall behind on their debt-servicing payments.”

More ominous news from the end of the boom phase, we’d say…

“The recent performance of companies like Uber, Lyft and WeWork proves that small investors are ready to tell venture capitalists, ‘Take a hike!’” says our own iconoclast investor James Altucher. Which jibes with what Dave wrote yesterday at The 5…

“In the run-up, companies like Uber or SmileDirectClub achieved nosebleed valuations.”

Here’s an understatement — “All of a sudden, many of these companies aren’t looking too hot.”

“And for VCs invested in the most far-out technologies,” says James, “the situation might be even worse.”

The way James sees it, technologies like autonomous vehicles and 5G are still about a decade away from going mainstream.

“Sure,” he says, “businesses are already putting autonomous vehicles on the road and launching 5G in certain cities around the country.

“But these are just the early stages [for] these technologies.

“For small investors,” James says, “these long time frames can be a blessing in disguise…

“Sure, venture capitalists often have access to investments in the most promising tech companies before anyone else,” James concedes. But there’s a downside to early investing — especially when it comes to high tech…

“Specifically, most VC funds have to return money to investors within 10 years,” says James.

“Meaning, technologies that will take more than 10 years to develop are better suited for individual investors looking to build wealth for… retirement.

“For investors focused on the long term, these high-tech opportunities [in autonomous vehicles and 5G] might be the key to retirement riches,” James concludes.

A rare U.S. gold coin goes to auction in Charm City on Nov. 14. The Gold Stella — originally worth $4 — was struck in 1879 and intended to be a world currency.

“[The] coin was designed to weigh and compose precious metals that match the Latin Monetary Union, which unified several European currencies into a single currency,” Barron’s reports.

In a significant way, the Latin Monetary Union (LMU) foreshadowed the EU. Established in 1865, the Union included Belgium, France, Italy and Switzerland and was later officially joined by Greece.

The Union also had informal agreements with other countries in Europe and several former colonies in Africa and South America. The LMU was eventually dissolved in 1927.

The goal, in the main, was to standardize currency for trade purposes. “Through the Union, one franc would [be worth] the same amount as one lira, peseta, leva or drachma and be easily exchangeable within the member nations,” says Barron’s. 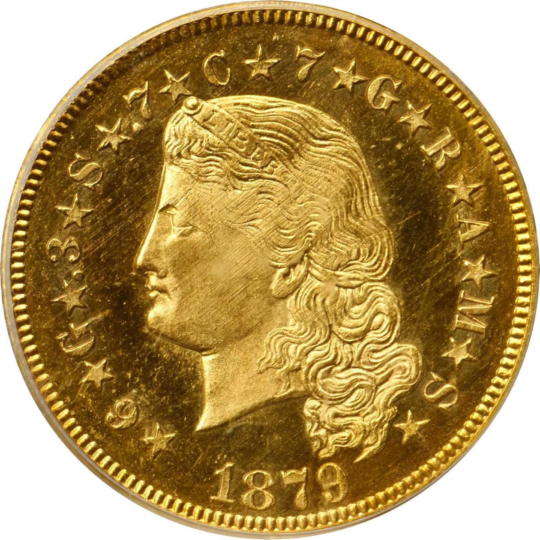 Then per the recommendation of Iowa Congressman John Kasson, “who was appointed by President Rutherford B. Hayes as envoy extraordinary and minister plenipotentiary to the Austro-Hungarian Empire in 1877,” the U.S. struck two versions of the $4 coin that were equivalent to the weight of the Austro-Hungarian 8 florin and the French 20 franc pieces.

The U.S. Mint first produced about 25 coins of the version with the flowing hair (featured above) that were distributed to members of Congress. (The alternate version of the coin features a woman with coiled hair. Just in case you ever run across one. Hold onto it!)

Barron’s says: “In 1880, the mint struck more examples, estimated to be in the region of between 425 and 800 coins and all bearing the date 1879, for government officials. But the coin never was approved for regular full-scale production…”

Brian Kendrella, president of Stack’s Bowers Galleries, says: “The Stella represents an attempt to integrate the world’s money as one. We still haven’t been able to do this even today but this coin represents the closest we likely ever came.”

“Here’s a thought (about repo markets),” a reader says. “You say banks need an overnight loan? They borrow money and put up collateral (usually Treasury bonds).

“Could that collateral also be gold?

“What if this is [banks] getting bailed out before the crisis happens?

“They use liquidity to buy gold instead of bonds (while gold is being manipulated downstream) and when the economy blows up, they are cozy in bed with each other while… we get stuck with Federal Reserve notes…

“Just thinking out loud (I am sure that even if there is any truth to it, it would be less transparent than this).”

The 5: That’s about as plausible as anything else… (Just so you know, “thinking out loud” might get you labeled a conspiracy theorist these days.)

And learn more ways to multiply — and protect — your wealth…

It’s important to note this credit discount opportunity is due to expire on Oct. 25, 2019.