“Deplorables” by Any Other Name

Do you live in a “taker state”?

This morning your editor was listening to a podcast interview about Syria with Joshua Landis, who’s head of the Center for Middle East Studies at the University of Oklahoma.

He mentioned something he’d said the other night during an appearance on the PBS NewsHour.

“I said something like, ‘Trump’s desire to end these endless wars is very popular.” And I used the example of Oklahoma, where people want better schools and better roads and they don’t want to spend $5 trillion on the Middle East.

“And I got tons of emails and phone calls from people saying, ‘Oklahoma is a taker state. They don’t pay as much taxes as they get.’”

He quickly moved on to other topics. But I couldn’t stop thinking about this one.

Today was the first time I’d heard the term “taker state.” But I’ve known about the phenomenon for years.

In 2011, I was the lead researcher for a white paper issued by Agora Financial called American Oases: Five Spots to Find Paradise in the Midst of Crisis.

We sought to identify the five states whose governments were best positioned to endure a new recession and/or financial crisis without imposing massive tax increases on their citizens.

By the way, the five states we identified were — in no particular order — Florida, Indiana, New Hampshire, Texas and Wyoming. Again, though, this was eight years ago.

It’s the last of those three criteria that’s key to whether a state is a “taker state” — or, on the other hand, a “donor state.”

It comes down to this question: Do the individuals and businesses in your state send more money in taxes to Washington than the state gets back?

The Tax Foundation first took up this question state by state more than a decade ago. It compared the federal tax burden in each state with all the federal spending that comes back to the state — whether it’s grants for federal programs, wages for federal employees or Social Security and Medicare payments.

Other think tanks have crunched the numbers since then. One recent analysis comes from the Rockefeller Institute. On this map, states that pay in more than they receive are in red while states that receive more than they pay are in green. 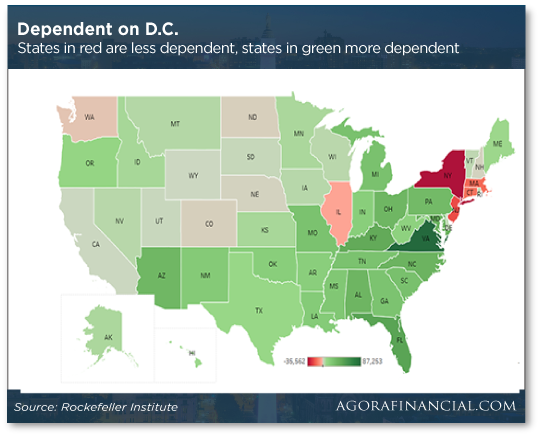 By this calculus, Connecticut is least dependent on Uncle Sam — getting back only 74 cents for every dollar sent to Washington. Nine other states also pay in more than they get back, while California breaks even.

Eight years ago, we were identifying “taker states” to help readers ride out a potential financial storm. Now it appears “taker states” are a political football.

In our American Oases report, we warned that — as one example — retiring to a lake house in Tennessee because there’s no state income tax might backfire in the future because Tennessee is dependent on Washington’s largesse. (The 2019 figure is $1.46.) If Washington finds itself in a fiscal crisis, unable to continue its borrow-and-spend ways, Washington might tell the likes of Tennessee, “You’re on your own.” Hello, state income tax.

But in the hyperpoliticized environment of 2019, others are latching onto these figures with a very different agenda. Note how several of the states that send more money to Washington than they get back are politically “blue” — New York, New Jersey, Connecticut, Massachusetts, Illinois. And again, California breaks even.

In other words, “taker state” is a blue-state code word for “red-state freeloaders.” A different shade of deplorable.

Connecticut might get back 74 cents for every dollar it sends to Washington, but the state government’s debt burden is staggering — $51,800 per taxpayer, according to a think tank called Truth in Accounting. Meanwhile, red-state Idaho collects $1.53 for every dollar sent to D.C., but state government actually has a surplus amounting to $2,900 per taxpayer. (Kentucky is a basket case on both counts.)

Our point today is that rhetoric like “taker state” sounds a little ominous. It sounds like more smoldering fuel that could erupt into a new American civil war — a topic we addressed in depth most recently in January.

One day next month we’re going to spin a very specific scenario for how a new American civil war might break out. But in the meantime, we want to know what’s the sentiment wherever you are: Are resentments simmering against your fellow Americans? And is it something you worry about?

It’s not too soon to start talking about “all-time highs” in the stock market again.

As we write this morning, the S&P 500 is up eight points at 3,018. Only eight more points and the index will exceed its record close set three months ago.

But our chart hound Greg Guenthner has his doubts: “We now need to see some follow-through to help get the averages over the hump and make a meaningful push to new all-time highs.

“So far this month, many stocks and sectors have backed off after posting strong single-day performances. This phenomenon has contributed to much of the chop we’ve experienced over the past few weeks.

“My feeling is there’s still plenty of headline risk looming over this market,” Greg continues — “especially as we slog through a busy earnings season.

“Investors are waiting for the other shoe to drop in the trade wars and no one is really buying into the market’s move toward all-time highs. If we do see a major breakout, there will be plenty of sold-out bulls to chase the move.”

Speaking of earnings… Intel beat analyst expectations and boosted its sales forecast. INTC shares are up nearly 7% on the day. But Amazon’s profits fell 26% from year-ago levels — the first profit decline since 2017. Traders are punishing AMZN shares, down 2.5% at last check.

Gee, it wasn’t that long ago when Amazon posted losses quarter after quarter and Wall Street thought it was just fine because the company was relentlessly investing in its future growth. Now we have slowing profit growth thanks to heavy spending on one-day Prime delivery — an investment in future growth, for sure — and the Street has a cow? Whatever…

Gold pushed back above $1,500 in electronic trading overnight, and it’s adding to those gains this morning at $1,511.

For the record: The Federal Reserve amped up the repo rescue yesterday. Again.

The Fed’s cheap overnight loans to Wall Street firms, previously $75 billion a day, are now $120 billion a day. In addition, the two-week term loans the Fed is offering twice a week have been boosted to $90 billion a week. That’s $690 billion every week, if you’re keeping score at home.

Granted, most of the money gets returned on time and with interest… but we still don’t know why these firms are turning to the Fed for liquidity instead of turning to each other, which is how it usually works. Still no squawking from Congress. Still no curiosity from the media. Move along, nothing to see here, huh?

And we have to emphasize, “most” of the money comes right back to the Fed. But not all. The Fed released its weekly balance sheet statement late yesterday — $3.969 trillion, up only slightly from the week before. But it’s still $200 billion higher than it was before the repo rescue began six weeks ago. (And of course, don’t call it “quantitative easing.” Heh…)

Sign of the times: In hopes of getting Congress to line up behind his cryptocurrency plans, Facebook CEO Mark Zuckerberg is resorting to a little China-bashing.

As you might be aware, Facebook is keen to launch its own crypto called libra. Governments, especially the U.S. government, aren’t too keen on that. Federal Reserve Chairman Jerome Powell says it could pose a risk to the financial system, to say nothing of concerns about money laundering.

With that in mind, Zuckerberg went before the House Financial Services Committee on Wednesday… and played the China card.

“China is moving quickly with the launch of a similar idea in the coming months,” he said. “Libra is going to be backed mostly by dollars and I believe that it will extend America’s financial leadership around the world, as well as our democratic values and oversight.”

Those are all buzzwords Congress is eager to hear. No telling if Zuck changed any minds, but “yellow peril” rhetoric is popular on both sides of the aisle these days. The fact he resorted to it reinforces our thesis that the trade war will last a looong time and extend to realms far beyond trade.

Crude is set to end the week at the highest levels this month — $56.36 a barrel — as the Pentagon gears up to “secure the oil” in Syria.

This morning, Defense Secretary Mark Esper confirmed the Pentagon will send tanks and armored vehicles to into the oil fields of northeast Syria — theoretically to keep ISIS from accessing them.

“Sending Abrams battle tanks and Bradley armored vehicles would mark a new stage in the five-year campaign against ISIS,” the Reuters newswire points out.

Then again, ISIS is probably just a smokescreen. “The Pentagon is making contingencies for a big fight with Russia for Syria’s oil,” says Nicholas Heras from the Center for a New American Security. We’re sure that’ll turn out well.

In any event, the deep state has once again sabotaged Trump’s plans to get out of Syria — assuming he ever really meant it when he first announced those plans last December.

In light of the repo-rescue developments this week, a reader zooms out the lens:

“Dude, I have postulated that the creation of the Fed is the biggest underlying problem of the country today.

“I believe that if money has no real value, people lose an anchor to decent values.”

The 5: The most important thing — and this was a thread that ran through Ron Paul’s presidential campaigns — is that central banking makes war and empire easier.

With the “magic” wrought by central bankers, government can wage war and wield its might without imposing a direct burden on taxpayers.

In more recent times, imagine the Bush 43 administration trying to sell the Iraq War if taxpayers had to take the hit directly. Instead, the Alan Greenspan Fed could squash interest rates to (what were then) record lows… and for a while, it seemed as if the war was free!

Really, could we have a military-industrial-surveillance complex at all without the Fed?

P.S. This might be the first time a reader has addressed us as “Dude.” Hmmm…