Mismanaging a Business — On Purpose

“We’re coming into the end of the year, and my team is right on budget,” said the department head for one of the nation’s biggest “growth” companies.

The man is a neighbor of our income maven Zach Scheidt. They were talking shop one weekend recently as their families shared s’mores over the Scheidts’ backyard fire pit.

Zach wishes to keep a lid on the neighbor’s identity out of respect for his privacy. Ditto for the name of his employer — which you would absolutely recognize. “I can tell you that if you invested in the S&P 500 index, a significant portion of your capital would go directly into this stock,” Zach says.

Why the anonymity? Well, it’s because of the twist that came right after this fellow — we’ll call him Jim — said his department is on budget going into year-end…

“Unfortunately, if it stays that way, my boss is going to kill me!”

That doesn’t… sound… normal, does it?

As it turns out, “the unwritten rule at this company is to spend five percentage points more than your budget,” Zach tells us.

Here’s how Jim explained it to him: “The idea is that our company wants to spare no expense when it comes to growing our business. So they don’t want us to be frugal if that means we might grow at a slower pace.

“But in my department this makes absolutely no sense! Our spending has nothing to do with the company’s growth. Instead, my boss is worried that if we don’t spend more than our budget, the company will cut his budget next year.”

Nor is this an anomaly these days. At many of the fastest-growing companies, it’s standard operating procedure. We’ll tell you why in a moment…

… But for now, ponder this: Large chunks of Corporate America are now functioning just like government.

Maybe you’re familiar with how budgeting works in Washington, D.C. If you don’t spend every penny you’re allocated during the fiscal year, your agency is in danger of having its budget cut for the following year.

So when the end of the fiscal year rolls around in September, agencies that are under budget often go on a spending spree — perhaps loading up on office supplies or other items they don’t really need. Otherwise the budget gets cut… and the agency becomes less important in Washington’s scheme of things.

The term was coined by Kurt Richebächer, one of the more fascinating figures in 20th-century finance. Throughout much of the 1960s and ’70s he held the prestigious post of chief economist at Dresdner Bank — a leading bank in what was then West Germany. Late in life he turned to writing. From a seaside condo on the French Riviera, he wrote his Richebächer Letter for a global audience; Agora Financial was privileged to publish it until his death in 2007 at age 88.

The finance sector is supposed to be the servant of companies that seek to create products and services that allow you and me to improve our standard of living. But nowadays, finance has become the master. Many companies organize their business models around pleasing Wall Street instead of Main Street.

Finance types wallowing in all the money created by the Federal Reserve and other central banks are eager to throw that money at any “growth” story. As long as a company’s user base keeps growing and sales keep growing… profitability doesn’t matter. Or it doesn’t matter as much as common sense would tell you.

And that’s why Jim’s boss will be furious if Jim doesn’t go over budget.

“Talk about wastefulness!” says Zach. “Imagine how these growth companies could lock in much more in earnings, simply by being smart with their incentives.

“But instead, managers from the highest levels, all the way down to hourly employees, are expected to spend whatever is necessary (and sometimes what isn’t necessary) day in and day out.

“This expense problem is one of the reasons I’m not a big fan of investing in big ‘FANG’ growth stocks like Facebook, Amazon, Netflix and Google.”

The interesting thing now is that Wall Street might be starting to come to its senses.

“For what seems like an eternity, companies with absolutely no profit (and sometimes no immediate plans for profit) have traded at much higher values than established firms with decades of reliable profits,” Zach says.

That makes sense during the early boom phase of the boom-bust cycle. But the current boom cycle is in its 11th year now. Result? “Investors are shifting their focus from ‘growth at any cost’ to ‘profits at a reasonable price.’”

What Zach is talking about here is the ever-present push-pull between “growth” stocks and “value” stocks. For the last decade, growth has been in favor. But Zach was spotting a shift to value a few weeks ago, and he says that shift is picking up steam.

That’s why the major U.S. stock indexes notched record highs this week… while Google parent Alphabet is the only one of the FANG group that’s done likewise.

Speaking of the major U.S. indexes at all-time highs, that’s more or less where they are this morning.

At last check, the Dow and the S&P were in the red, but only microscopically. The Nasdaq has sold off a bit more substantially, nearly a half percent.

“The World Has Gone Mad and the System Is Broken,” reads the headline of the latest missive from Ray Dalio.

Dalio is founder of Bridgewater Associates, the world’s biggest hedge fund. Over the summer we took note of a lengthy essay Dalio posted at LinkedIn. He spoke of an approaching “paradigm shift” — warning that prices of financial assets had grown much faster than the economy over the preceding 10 years, and that can’t last. In the coming environment, he feels gold would be “both risk-reducing and return-enhancing.”

“This set of circumstances is unsustainable and certainly can no longer be pushed as it has been pushed since 2008,” he concludes. “That is why I believe that the world is approaching a big paradigm shift.”

He didn’t say anything about gold this time. Then again, he didn’t have to.

Sign of the times? The number of English majors has tumbled 25.5% since the Panic of 2008.

That’s according to the National Center for Education Statistics. “It’s the biggest drop for any major tracked by the center in its annual data and is quite startling,” says The Washington Post, “given that college enrollment has jumped in the past decade.”

The Post calls the trend a “great migration… Ever since the fall of 2008, a lot of students have walked out of English and humanities lectures and into STEM classes, especially computer science and engineering… As students feared for their job prospects, they — and their parents — wanted a degree that would lead to a steady paycheck after graduation. The perception is that STEM (science, technology, engineering and math) is the path to employment.”

The chart accompanying the story is striking… 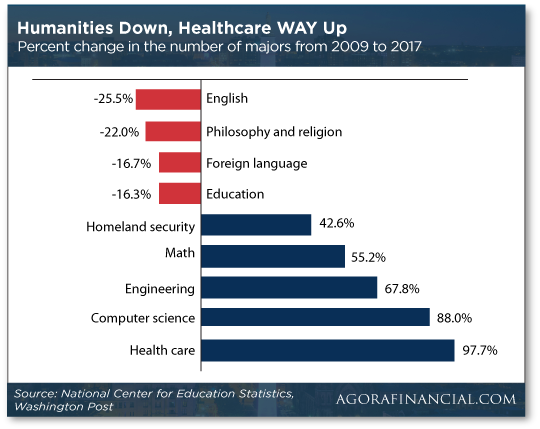 Hmmm… Around here we won’t bemoan the falling numbers of “education” majors. But it’s the growing non-STEM majors that catch our eye.

“Homeland security?” An overgrown surveillance state is nothing but a drag on the economy. And how many of those “health care” majors are actually delivering care to patients? Bet the majority are doing BS administrative jobs that wouldn’t exist in a free market. So those too are parasitical.

As it happens, your editor was an English minor — a decision that comes with no regrets. Were it not for a 400-level rhetoric course I took, I’d have never encountered Style: 10 Lessons in Clarity and Grace by Joseph M. Williams, an essential volume that’s aided my careers in both TV news and financial publishing. (Most of my classmates pursuing a broadcast journalism degree minored in political science — ugh.)

“The 5 fell into a left-wing trap,” says an email we got after yesterday’s episode.

The 5: Yes, and they’re also the ones exerting outsized influence.

That was the context for the entire discussion yesterday. Those low-paid CEOs probably own a sizeable chunk of their small and midsized businesses.

If those businesses happen to be traded publicly, they’re often as not an extremely sound investment — because the CEO’s incentives are aligned with yours as a shareholder. Our old friend Chris Mayer often cites the example of the late Ken Peak — CEO of Contango Oil & Gas. “Peak invested his life savings of $400,000 and raised $5 million in seed capital,” Chris says of Contango’s launch in 1999.

But it’s the high-paid, high-profile CEOs who don’t own a piece of the business — again, the hired guns — who are running companies into the ground. Sure, they can jimmy the numbers to generate a few good quarters and please Wall Street. Then, just before it all starts going sour, they bail and move on to the next gig — leaving a trail of layoffs and heartbreak in their wake.

That too is a symptom of “late degenerate capitalism” — the tail of finance wagging the dog of the real economy, the whole sorry sham enabled by central bankers showering their funny money onto the finance sector.

P.S. You won’t find this phone number listed in any public phone book or website.

But if you call it before midnight tomorrow night, it could set you up to become a multimillionaire retiree.