The year is 2023. President Elizabeth Warren has just ordered the deployment of National Guard forces to Syria, to join the regular troops already fighting a widening war there.

The governor of Wyoming is refusing to comply with the order, absent a congressional declaration of war — something Congress hasn’t done since World War II.

Warren has dispatched federal troops to northern Colorado, poised to sweep up Interstate 25 and enter Wyoming at any moment to enforce the order. “America will not abide this lawlessness,” she declares. She has the support of Wyoming’s lone Congress member — House Speaker Liz Cheney.

The troops will meet resistance from the Wyoming Guardsmen, joined by antiwar protesters from out of state. Some of them are armed. Many are veterans of Iraq and Afghanistan. Many more were chanting “Bring them home!” at Donald Trump rallies in 2020. They’re forming human chains around Wyoming’s National Guard armories.

From time to time this year we’ve entertained the possibility of a new American civil war. Today we present what seems a plausible scenario for how it might break out.

As we approach year-end, the topic has gone mainstream: As you might have seen on The Drudge Report this morning, The Atlantic is devoting an entire issue of the magazine to the topic.

Throughout the year, one question has nagged at us: For all the tensions between red and blue, rural and urban, nationalist and globalist… what would be the defining issue of a new all-out conflict?

Supreme Court nominations and border walls seem like weak tea compared with slavery… or independence from Great Britain. (The historian Michael Vlahos says the Revolution was America’s first civil war, and he has a point.)

Today, we present one possibility. We hope, we pray, it doesn’t come to pass. We hope the protagonists in the tale that follows can achieve their ends without setting off a bloody backlash from this country’s power elite.

But if they can’t, consider yourself warned…

A majority of veterans surveyed by Pew Research believes the Iraq and Afghanistan wars weren’t worth fighting, “considering the costs versus the benefits to the United States.”

Sixty-four percent say that about Iraq. Only slightly less, 58%, believe the same about Afghanistan. Among those who served on active duty after Sept. 11, 2001 — roughly one in five veterans — the numbers are about the same. Ditto for the public at large.

At the very least, a separate poll of troops and veterans by Smithsonian finds 84% believe the U.S. presence in those two countries has “been going on too long.”

The current president knows how to tap into that sentiment — perhaps because he knows it helped him get elected.

Rolling Stone writer Matt Taibbi recalls Donald Trump testing out applause lines at his rallies in 2015, seeing whether war weariness would sell. It did — even in military-heavy South Carolina, where he won a crucial early primary.

After Trump’s victory in the general election, researchers at Boston University and the University of Minnesota took a deep dive into the results from three key states that were “blue” in 2012 and turned “red” in 2016.

Their conclusion? Communities whose sons and daughters suffered a disproportionate level of military dead and wounded appear to have flipped the election to Trump. Those voters took to heart his campaign-trail rhetoric about an end to “stupid wars.”

“There is a significant and meaningful relationship between a community’s rate of military sacrifice and its support for Trump,” the researchers wrote. “Our statistical model suggests that if three states key to Trump’s victory — Pennsylvania, Michigan and Wisconsin — had suffered even a modestly lower casualty rate, all three could have flipped from red to blue and sent Hillary Clinton to the White House.”

Trump is again tapping into that sentiment during the 2020 campaign cycle.

The crowd broke out in a chant… 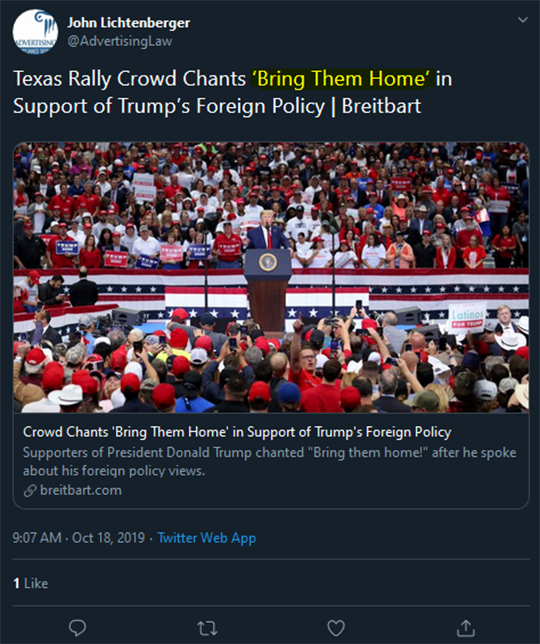 And that’s the message a group of Iraq and Afghanistan veterans is bringing to Washington, D.C., this week.

They hail from 24 states, organized by a group called Bring Our Troops Home. Its founder is a former Idaho National Guardsman who served in Afghanistan, Dan McKnight.

McKnight quickly found support in nearby Wyoming from the majority whip in that state’s House of Representatives — Republican Rep. Tyler Lindholm, a Navy veteran. Lindholm reached across the aisle and found further support from Democratic Rep. Andi Clifford.

In all, state legislators from seven states will join the veterans for briefings and panel discussions tomorrow morning at the National Press Club. Then in the afternoon, the group will fan out across Capitol Hill to press their case with their home-state federal lawmakers.

They’re keen to make the point that they’re not Vietnam-era hippies. Or as former Army Ranger James Lechner tells the Washington Examiner, “It’s not Code Pink or any crap like that.”

“We have a simple message,” Wyoming’s Lindholm tells the Rawlins Times: “Support the president’s efforts to withdraw American troops from war zones in Afghanistan, Iraq, Syria, Yemen and elsewhere, and bring our troops home.

“Then, before American troops are sent into combat overseas in the future, return to the constitutional standard of requiring a formal declaration of war by Congress, as stipulated in Article 1 of the U.S. Constitution.”

Lindholm’s encounter tomorrow with Rep. Liz Cheney (R-Wyoming) ought to be, ummm, interesting.

Cheney shares all the most hawkish impulses of her father, the former vice president. After Iran shot down a U.S. drone last June, she called for Washington to bomb Iran.

“That’s insane,” said Lindholm on a radio talk show in Casper. “We essentially lost a pickup truck. It’s folks like Rep. Liz Cheney who are keeping us at war even though she has never been at war herself.”

(And yes, the buzz in Washington is that Cheney has her eye on becoming House speaker if the GOP regains the majority. Unless she runs for the Senate…)

It’s one thing for the veterans to seek redress of their grievances in Washington; we suspect they won’t get far. But it’s their efforts back in their home states that open up the potential for our chilling scenario.

Bring Our Troops Home has drawn up model legislation for all 50 states. It forbids a state’s National Guard units from being deployed to combat zones unless Congress approves a formal declaration of war.

The imperative for such legislation is not only constitutional… but practical.

Recall how the Iraq War hollowed out the National Guard.

Warm bodies were scarce. Active-duty troops were forced to stay in the military beyond their scheduled hitch (“stop-loss” was the euphemism). Reserve forces were stretched to their limits and beyond. 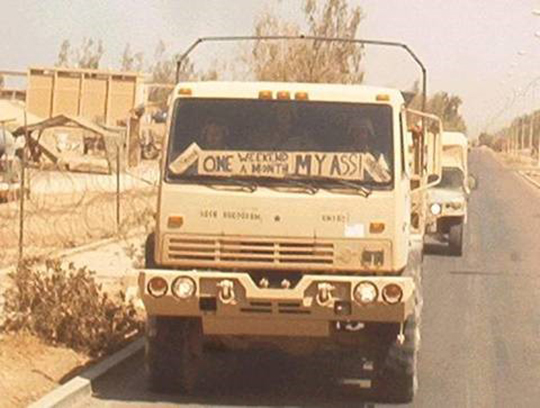 Even now, with peak troop levels in Iraq and Afghanistan many years in the past, the Guard is still essential to Washington’s global military “footprint.”

As the University of San Francisco’s Rebecca Gordon writes, the Guard “operates 42% of all military aircraft and supplies 39% of the Army’s operational forces — essentially the same proportion it provided during the early years of the Iraq War.“ A year ago, a guardsman who was also the mayor of North Ogden, Utah, was killed in Afghanistan. Guardsmen have served in recent years in Yemen, Libya — and, yes, Syria.

The National Guard Bureau’s “posture statement” lays out “three core missions,” and none of them has to do with rescuing your neighbors from wildfires or floods — which is how Guard duty is usually advertised to us.

The concept behind “no Guard deployment without a declaration of war” is already the official stance of the Republican Party of Texas.

Here’s a plank from its 2018 platform: “Congress shall not abdicate the war powers to the executive branch except when under imminent threat and not to be used as a preemptive strike unless approved by Congress. The Texas National Guard and the Texas Air National Guard should only be deployed to overseas combat zones under authorization of Congress through a declaration of war.”

Bring Our Troops Home’s model legislation has already been introduced in West Virginia’s legislature, although it didn’t go anywhere. Lindholm plans to introduce it in Wyoming next year, where he’s more confident about the outcome. Being the No. 2 lawmaker in a GOP majority no doubt helps.

If this legislation becomes law in any state… and if the president calls up Guard troops from that state… well, you can see how events could get spicy in a hurry.

The details are beyond the scope of our 5 Mins. today — even though we’re taking up the entire time on this one topic! — but here’s Gordon with the gist…

But what if the governor essentially deems the president to be acting unconstitutionally? That’s the conflict that would be set in motion should this legislation pass and Guardsmen are ordered to deploy without a congressional declaration of war.

At that moment, a widespread scorched-earth guerrilla conflict becomes possible. If that possibility becomes reality, the only asset classes that will thrive are precious metals, ammunition and No. 10 Mountain House cans.

For the moment, our chilling scenario is still totally hypothetical.

Perhaps if the legislation passes in a state, the feds will sue — in federal court — to have it struck down.

Or maybe it won’t even get that far. In West Virginia, Delegate Pat McGeehan — an Air Force veteran with Afghanistan experience — has tried and failed to get the legislation passed for five straight years.

This year, a major lobbying effort to deep-six the bill came from… the West Virginia National Guard.

According to the Wheeling Intelligencer, Guard leaders believed the bill “could have cost the state millions as military missions would have been deferred to other states if the measure had been enacted.”

McGeehan says the Guard even recruited Pentagon leadership on its behalf: “The military brass adamantly worked to undermine our civilian legislature to prevent the peoples’ representatives from even having a final debate on the subject of whether the Congress should take a vote before our men and women in the military are sent into wars overseas.”

Well, the military-industrial complex has its ways after having been built up for the last 70-odd years.

But we still hold out hope McGeehan, Lindholm and crew make progress in the state capitals… and there’s no resulting backlash from D.C. It might be the best hope America has for becoming “a normal country in a normal time” again.

P.S. The markets, you wonder? Not much happening. Back to regularly scheduled programming tomorrow.

P.P.S. While the scenario we spun today is still several years out, it’s not too early to start thinking about next year and how to prepare your portfolio.

Watch later this week for details about our 2020 Survival Summit: The No. 1 Money Move to Prepare for the 2020 Elections.

We’ve already told you about two of the high-powered guests lined up for this event — Agora founder Bill Bonner and Agora Financial executive publisher Addison Wiggin, back together  after co-authoring the New York Times business bestsellers Financial Reckoning Day and Empire of Debt in the mid-2000s.

We’ll be in a position to tell you about two more very soon — maybe as early as tomorrow.