“Filing for Social Security is one of the most important things to understand right now if you want… a successful retirement,” says our retirement specialist Beau Henderson.

Because Social Security can make up to 50% of the average retiree’s monthly income, it’s crucial to clear up two commonly held misconceptions. So getting right to it…

“I was told I may as well claim my Social Security now at age 66, since there’s no longer a reduction on what I receive. Is now really the best time to file for Social Security?”

“The Social Security Administration refers to the age when you can claim 100% of your benefit as ‘full retirement age,’” Beau says. “So it’s true that if you file at this age, you can collect your full benefit.

To completely juice your Social Security income, you’d wait until age 70 to file for your peak monthly benefit.

Beau says: “Each year you delay filing past your full retirement age (up until 70), you’re rewarded with an 8% increase to your monthly benefit.

“And this doesn’t just affect you,” he continues. “The amount that you receive decides how much your spouse is entitled to receive in Social Security survivor’s benefits in the event of your death.”

Of course there are numerous decisions that go into the timing of your decision but by and large, the longer you delay filing for Social Security — until age 70 — the more money you’ll have in income.

Which leads to the second FAQ…

“I was told I would receive about the same amount of Social Security over time regardless of what age I file, so my filing age doesn’t really matter. Is that true?”

Here’s the thing: “Social Security is designed to roughly pay out the same amount of benefits regardless of age,” Beau says. At least, that’s the plan… but we all know things don’t always go according to plan.

“You can claim 100% of your retirement benefit at full retirement age. And if you wait to file past that age,” says Beau, “you’re rewarded with a larger benefit.”

On the other hand, you can file for Social Security as early as age 62. And perhaps you believe it doesn’t matter — it’ll all come out in the wash.

In other words: “If you claim early and receive more monthly checks paying you smaller amounts, it will be roughly the same as if you decide to delay filing and receive fewer checks that each pay you a higher amount.”

Trouble is, the math’s off… 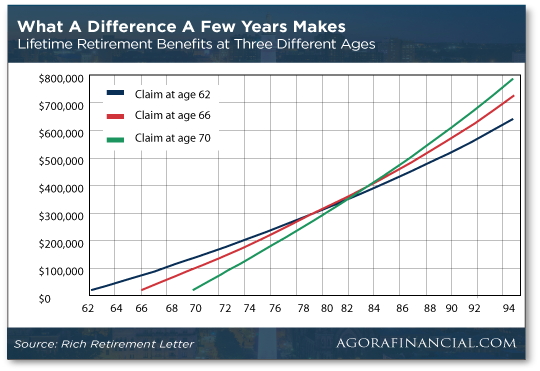 “It’s only true that the amount of your benefit will be roughly the same at any age if you live until 82.” So life expectancy plays into your decision when to file.

“The longer you can reasonably expect to live,” Beau says, “the more sense it makes to delay filing.

“It could make the difference of hundreds of thousands of dollars over the course of your lifetime.”

Even though the information we’ve detailed today is available free at the SSA website, when it comes to planning your Social Security filing strategy, an expert’s input can guide you through vital retirement decisions.

[Ed. note: Have any other retirement-related questions?

Check out Beau’s Strategic Retirement service where he covers the “ins and outs” of funding your retirement… and so much more.

For a limited time, with a paid subscription to Beau Henderson’s Strategic Retirement newsletter, you’re eligible to claim a FREE “Retirement Box”… where you’ll discover tools that might boost your lifetime retirement benefits by as much as $230,000… if not more.

Click here now for details before this offer expires].

“The earnings season is coming to a close for Q3 and investors are celebrating,” says ex-investment banker Nomi Prins.

“S&P 500 companies have reported higher profits than expected and average share prices have risen 2.3% after earnings reports,” she says. “This beat the five-year average of 1%.”

As for investor sentiment, James Ragan, analyst at D.A. Davidson, says: “Expectations were low for some of the sectors exposed to the overall economy and trade. Some of those fears have really subsided, creating a good quarter.”

Nomi notes: “What’s interesting about this renewed optimism is businesses are getting more leeway than in the past with regards to their earnings.

“For corporations that unexpectedly disappointed on estimates, share prices fell an average of 1.5%, less than the 2.6% that stock prices have fallen on average in the past five years when companies missed projections

“What this means for you,” Nomi concludes, “is companies are lowering their guidance while analysts take their estimates lower. This could create more companies that beat estimates and higher share prices as a result.”

No major economic numbers to report. But for more news from the world of finance…

Now we learn the original discount brokerage is feeling out competitor TD Ameritrade for a potential buyout. And things are moving quickly.

“When [and if] the merger happens,” our analyst Greg Guenthner says, “the two companies would control a mind-boggling $5 trillion in assets combined. That’s a lot of retirement accounts.”

[To give you an idea, according to Forbes, Apple’s net worth this year is $205.5 billion, making it the first company to surpass $200 billion.]

Per the brokerage industry: “That would leave Fidelity and the new Charles Schwab/TD monster as the two biggest players in the game,” Greg says.

No doubt, the mega-merger will draw the attention of antitrust looky-loos…

“I recently learned that my hometown is an 18-hour city,” says our Atlanta-based income specialist Zach Scheidt. “You might be living in one, too.”

While you can find something to do at any time of day or night in New York, Los Angeles, Boston and Chicago — according to real estate pros who coined the term — “an 18-hour city is a metropolitan area with a healthy job market and fairly affordable housing,” Zach says.

“Cities like this have become very attractive to the wave of millennial adults who are starting new families and hitting the sweet spot of their careers.”

The website National Real Estate Investor says: “The poster children for this emerging class of up-and-comers have been cities like Denver, Austin and Nashville.” We’ll tack on Charlotte, Dallas and Orlando, too.

Some 18-hour candidates you might have missed? Columbus, Milwaukee, Kansas City and Charleston.

“These four cities were identified because they generally have had population and employment growth well above the national rate, major millennial migration and high projected five-year gross metropolitan product (GMP) growth — all key factors in how we assess potential growth in a metro area,” National Real Estate Investor says.

Zach continues: “It stands to reason that 18-hour cities have some of the best commercial real estate markets in the world.

“After all, the people buying houses in these red-hot areas need places to work. And growing businesses need space for all of the new employees flooding into their city.

“Remember, though, that companies rarely own the buildings they work out of. It’s far more economical to rent them from someone else,” says Zach.

“The companies can write off the rental charges as a business expense, and they have more flexibility if they outgrow their current space.

“So it’s an especially great time to be in the commercial rental market,” Zach concludes.

Sure, an investor could own commercial property in these 18-hour cities… but who needs the headache? Instead, Zach’s keen on REITs that operate in these booming millennial meccas.

To the mailbag: “I live in northern Colorado and I would be one of those people standing in support of the Wyoming National Guard in your civil war 2023 scenario.

“I have never served in the military. However, I am tired of our troops being in foreign countries.

“Why not bring them home and have them protect our own southern border?

“You’ve got to wonder if the suicide rate would go down if our guys were home instead of in some place where they don’t feel they are accomplishing much compared with what they could be doing at home.”

On a different topic altogether… 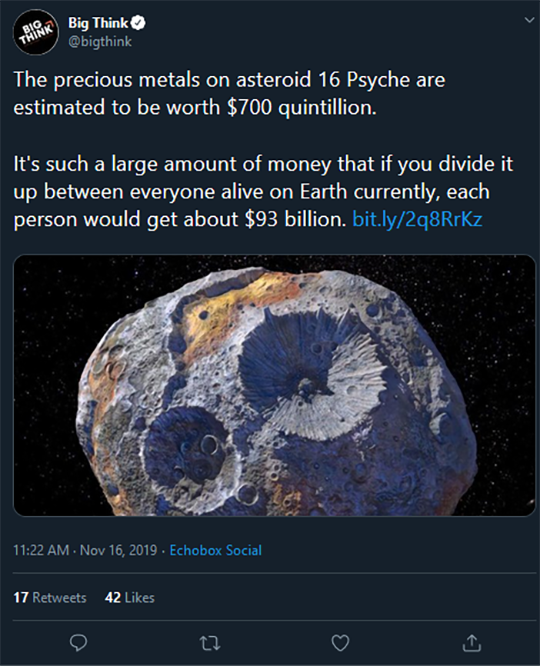 Barron’s breaks it down for us: “The [CNET] tweet repeated an oft-reported value for Psyche of $700 quintillion. For those keeping score, quintillion comes after quadrillion, which comes after trillion. A quintillion is a million times a trillion. Seven hundred quintillion has a 7 followed by 20 zeros.”

Whatevs. Just make sure my multibillion-dollar check is mailed to the correct address, Archimedes.

“So if Psyche is brought back to Earth,” Barron’s says, “can everyone be a billionaire?”

(Remember Betteridge’s law of headlines? It states: “Any headline that ends in a question mark can be answered by the word ‘no.’” Same rule applies here.)

We needn’t go further down this extraterrestrial rabbit trail to know the upshot is citizens of Earth aren’t going to get filthy space rich anytime soon.

Responding to CNET’s tweet, DHB said it best: “Scarcity. Abundance. How do they work.”

Have a great weekend!

P.S. To be clear, Beau Henderson’s message is NOT associated with the Social Security Administration.

(If you’re so inclined, check out the SSA’s free information at its website.)

Instead, the information he offers at Beau Henderson’s Strategic Retirement newsletter represents years of independent research, including an array of strategies.

To get access, along with your paid subscription, you can claim a FREE “Retirement Box” right here.