"No previous presidential candidate has ever owned a journalistic organization of this size," says the memo from Bloomberg News Editor-in-Chief John Micklethwait.

As you’ve likely heard by now, former New York Mayor Michael Bloomberg has entered the race for the Democrats’ presidential nomination. As you’re likely already aware, Bloomberg owns one of the largest purveyors of financial news and information — a fact that makes his candidacy of keen interest to us this morning. 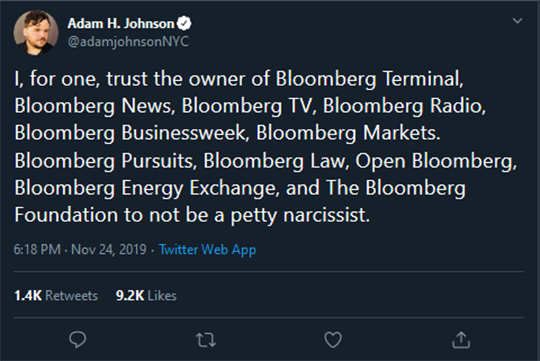 For its part, the news organization with Bloomberg’s name on it is adopting a, well, curious policy going forward. From Micklethwait’s memo: “We will continue our tradition of not investigating Mike (and his family and foundation) and we will extend the same policy to his rivals in the Democratic primaries.”

Micklethwait, by the way, was present at the posh Hamptons party we chronicled last summer — where journalists rubbed shoulders with the people they’re supposed to be holding accountable in finance and politics.

But let’s back up a moment: How did Bloomberg become — according to Forbes — the eighth-richest American with a net worth of $54.4 billion?

Put another way, how did those $2,000-a-month Bloomberg terminals become the foundation for an info-empire? The terminals are still aggressively marketed every time you read a news item on Bloomberg’s website… 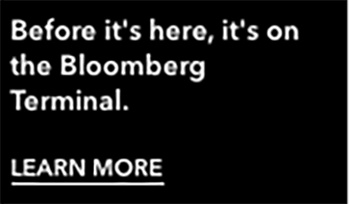 “Bloomberg was successful,” wrote economics blogger Robert Wenzel a few years back, “because of a monopoly on an inside Treasury securities quote it could provide that no one else could.

“In the 1980s,” Wenzel explained, “Bloomberg had the right to supply the ‘inside quote’… It was the quote that primary dealers (those that trade with the Fed) show amongst themselves when trading Treasury securities with the Fed. Back in the ’80s, the Federal Reserve didn't announce in advance changes in their fed funds policy. You would get a sense for what the Fed was doing by watching what trades the Fed was putting on…

“Before Bloomberg, the only people that saw the inside quote were the primary dealers themselves. Back then, if you were a bond trader, that inside quote was a gold mine source of immediate information as to what the Fed was doing, if you could get at it.

“Michael Bloomberg (former Salomon Bros. partner) was given the monopoly right to provide the inside quote on his terminals. Thus, every bond trader needed the Bloomberg terminal. Without it, you were trading blind.”

Exactly how he acquired exclusive access to this desirable information no one has ever explained.

And so Bloomberg can drop $31 million on TV ads this week without breaking a sweat.

By one estimate, that amount breaks the record spent by the Obama campaign in the final stretch of the 2012 election cycle. And we’re still more than 11 months away from Election Day!

The ad blitz will be impossible to get away from, depending on where you live. Your Michigan-based editor saw the first spot last night when it was time for a station break during the NFL pregame show on NBC.

But it’s not just ad time Bloomberg can buy with his fortune. He can also buy silence from other media outlets. 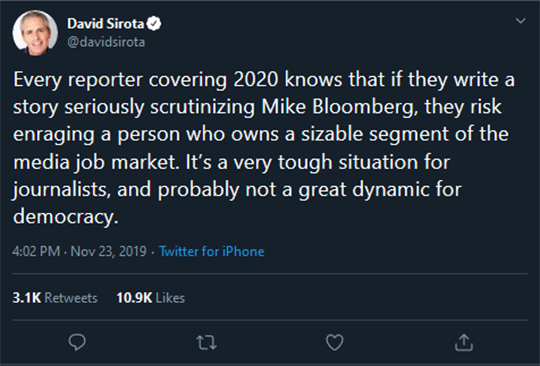 OK, that tweet is from a Bernie Sanders speechwriter. But he’s not wrong.

Turns out Amazon’s Jeff Bezos — owner of The Washington Post since 2013 — was among those urging Bloomberg to run. Did Bloomberg also get encouragement from Disney chief Bob Iger — who oversees ABC News — and who’s on the Bloomberg Foundation’s board?

And it’s not just “legacy” media where Bloomberg might have sway. No sooner did he announce his candidacy yesterday than he hired Gary Briggs as the campaign’s “digital director.” Up until last year, Briggs was chief marketing officer for Facebook — where he can no doubt reach out to his old colleagues in his new role.

Maybe it’s just us, but these connections feel like a potentially bigger threat to a free press than when Donald Trump issues mean tweets about NBC’s Chuck Todd.

The S&P 500 and the Nasdaq have powered to record levels this morning — thanks, the headlines tell us, to “renewed trade war optimism.” We didn’t even bother clicking on the headlines for the details because the details are sure to change again over the next 48 hours.

From where we sit, mergermania seems like an equally plausible explanation for today’s rally.

Charles Schwab’s takeover of TD Ameritrade, rumored last week, is now official — a stock-swap transaction valued at some $26 billion. Meanwhile, the French multinational that owns Louis Vuitton is about to add a most American luxury name to its stable — Tiffany’s, for $16 billion.

“Typically, dealmaking slows during the week of Thanksgiving and the week of Christmas,” says our M&A maven Zach Scheidt.

“After all, even big Wall Street buyout teams still take time off. And it can be hard for them to find a time when all the important parties are available for that key conference call where the agreement is made.

“The buyers and the executives of companies getting bought out want to be done with negotiations before the end of the year — and more importantly, before business breaks down for the last two weeks of the year.”

This year, however, there’s added urgency because Thanksgiving falls so late in November. “The short window between Thanksgiving and Christmas should see more deals announced than normal,” Zach explains — as today’s announcements demonstrate.

Members of Zach’s Buyout Millionaire’s Club will be well positioned to take advantage between now and year end. This premium service — one of our top performers — is currently closed to new members, but you’ll be among the first to know when the doors reopen.

It’s not an “incoming recession!” indicator… but it doesn’t exactly point to a robust economy, either.

The Chicago Fed National Activity Index crunches 85 economic numbers to come up with a composite snapshot of the economy. The three-month moving average rings in this morning at minus 0.31. It’s spent the entire year below the zero line, indicating economic growth that’s weaker than the long-term historical average — and these figures go back five decades.

At least it’s not approaching the minus 0.7 level — which almost always signals the onset of a recession…

After an eight-year run, the private-equity giant Blackstone (BX) is cashing out from the “steal of the century.”

In our now-defunct Apogee Advisory newsletter, Addison Wiggin and I exposed a scheme called “REO-to-rental” in early 2012. At that time, millions of foreclosed single-family homes were sitting on the federal government’s books in the wake of the housing bust. Under this scheme, hedge-fund and private-equity types could buy these homes at a deep discount and manage them as rentals.

These homes were available only to investors who could drop $1 billion on a bulk transaction. If you merely wanted to buy the bargain-priced foreclosure down the street and pull in a little investment income, you were out of luck. It was crony capitalism at its worst.

Blackstone was one of the most aggressive investors in this space — dropping $10 billion on about 50,000 properties through its Invitation Homes unit.

We also warned in 2012 that the investors in these rentals would eventually turn their holdings into REITs — real estate investment trusts whose shares you could buy on the stock market. “Alas, by then,” said Addison, “the easy money will have been made.”

Blackstone spun off Invitation Homes as a REIT in early 2017, under the ticker symbol INVH. For the most part, you’d have done just as well buying an S&P 500 index fund… and by this year, you’d have done far better investing in Blackstone itself… 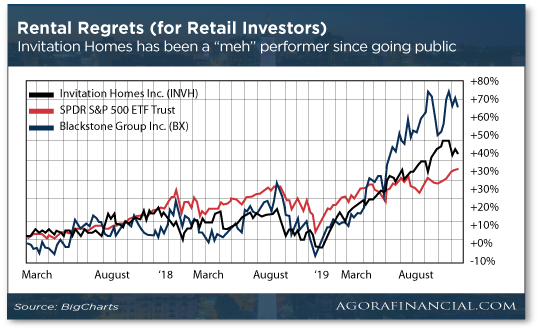 Last week, Blackstone sold off the last of its INVH stake. It made out far better than INVH shareholders — collecting about $7 billion, “better than twice what the firm invested,” says The Wall Street Journal.

As we mentioned last week, state government commissioned an anti-meth campaign based on an awkward pun that inspired much online mockery… 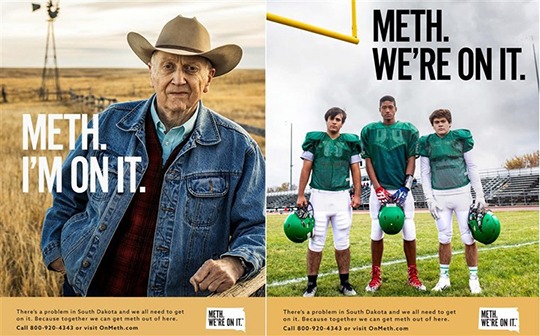 The contract went to Broadhead LLC, a Minneapolis-based ad agency. Depending on what source you read, the state paid anywhere between $450,000–700,000.

Whatever the amount, it doesn’t sit well with the South Dakota Advertising Federation. In a statement, the group slyly passed judgment on the quality of the campaign by saying its members “could have delivered a message by South Dakotans that resonates with South Dakota.” Heh.

Really, you almost wonder if the Minnesotans were enjoying a huge joke at their neighbor state’s expense. They don’t call it “Minnesota nice” for nothing!

To the mailbag, where folks see whatever they want to see…

“I’m neither a Republican nor a Democrat and go out of my way to see both sides,” says one entry, responding to a sales message some readers (not all) received yesterday.

“I live by one simple rule here and in sports. I wish everyone did. Don’t judge other teams harder then you judge your own.

“I wish you had the same philosophy. This reads like someone who wants to give a pass on everything said and everything done.

“Love your country more than you love your party. Everything Trump complains about the Democrats is things he is doing. Step back, try to see the bigger picture.”

Oh, but we’re taking slings and arrows from Trump partisans too.

“Damned if you do, damned if you don’t,” one reader says of the president. “Imagine taking down the establishment politicians, deep state media for the most part on your own. An outsider never respected for winning by anybody it seems except we the people whom he understands.

“Our president isn’t stupid, didn’t need the job, it’s cost him money and yet you all continue to criticize. Every day he is being backstabbed trying to change what is corrupt and evil in our country. Our State Department is most corrupt, thinking they tell president what to do. Wrong!

“As for Mueller and Schiff, enough said. When Trump’s gone who can we trust to take them on? Politicians all fall to D.C. thunder, but not President Trump. God bless him.”

The 5: One reader tags us as Trump partisans, another carps that all we do is criticize Trump. Which only makes sense. If you cherry-pick, that is…

P.S. You have less than 48 hours to watch this time-sensitive demonstration.

It takes only 90 seconds to watch. When you’re done, you’ll know how it could have a huge impact on your money, your family, your leisure everything.