Gee, does this mean the vaunted “substantial phase one” trade agreement is off? 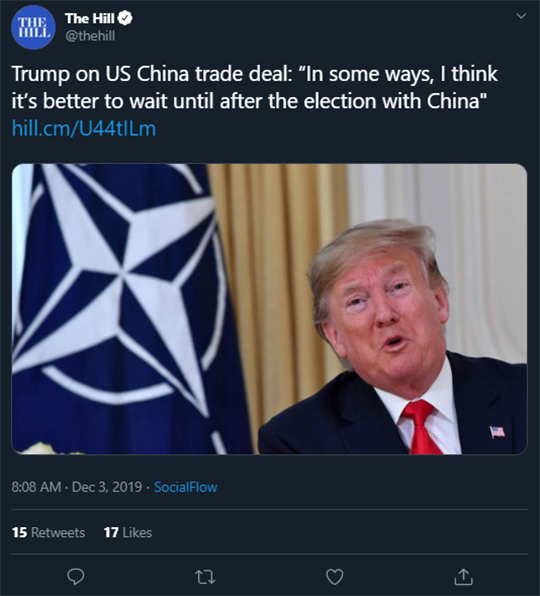 So said the president to reporters in London this morning ahead of a NATO summit. The market reaction has been one of mild panic. (We’ll get to that later.)

It was back on Halloween that Jim Rickards joined us for this warning: “The week of Nov. 16–22 promises to be the most dangerous period for investors since the 2008 global financial crisis.” Trade considerations figured into his calculus.

Obviously that week passed uneventfully. But that’s not because the dangers receded.

No, a terrible trio of events still looms. It’s just that, true to the ways of Washington, the proverbial can got kicked down the road.

As you might recall — then again, everything moves so quickly now, it’s hard to keep up — President Trump and Chinese President Xi Jinping were supposed to sign that “substantial phase one” trade agreement last month, on Nov. 16.

In our Halloween episode of The 5, Jim said, “There’s a good chance the deal will fall apart before then.”

And so it did. The signing ceremony was supposed to take place during a conference of Pacific Rim nations in Santiago, Chile. But Santiago is one of many cities around the world where economic distress has brought the masses into the streets during this autumn of 2019. So the conference was called off.

No venue, no signing ceremony, no deal.

And now we’re 12 days away from a new round of tariffs on U.S. imports from China.

A total of $156 billion in Chinese goods will be subject to an additional 15% tariff, effective Dec. 15 — unless something dramatic happens between now and then.

Only yesterday, Commerce Secretary Wilbur Ross said that date would be “a really good time” for stepped-up tariffs because they wouldn’t “interfere with this year’s Christmas” — meaning retailers have already stocked up before higher tariffs raise their costs.

“Bad news on any front of the trade war has been met with a negative reaction from Wall Street,” Jim reminded us on Halloween — not least because Wall Street always holds out hope until the last minute of a “breakthrough” in the trade war.

It was that hope that drove the major U.S. stock indexes to all-time highs last week — even after the phase-one signing ceremony had been postponed!

Then a few days after that Dec. 15 deadline come two events that “haven’t overlapped before in the nation’s history,” according to the Washington, D.C., insider rag Roll Call.

We’re talking about a mashup of a “partial government shutdown”… with impeachment.

Congress and the White House still haven’t come to terms on a budget for the 2020 fiscal year, which began on Oct. 1. A shutdown loomed back on Nov. 21… but Congress passed and the president signed a one-month stopgap measure.

So the new drop-dead date is Saturday, Dec. 21.

Then as now, “Trump might just decide that a shutdown is a good way to show House Speaker Nancy Pelosi who’s boss,” says Jim, “and fire up his base.”

That said, “a shutdown would be devastating for the stock market.”

Like the shutdown, impeachment’s time horizon got pushed back during November — but only by a few weeks.

Congress is now racing the clock on both fronts and will probably blow its deadline. The House is supposed to wrap up its business for the year on Thursday, Dec. 12, before its holiday recess. The Senate is due to conclude a day later — Friday the 13th. (Heh.)

But we’ve seen this movie before — a looming shutdown that keeps Congress in session days after members are supposed to return home. Look for a shutdown drama the week of Dec. 16 — even as House Democrats move toward an impeachment vote, checking off a major item on their to-do list before year-end.

“Fears of an alternative, less business-friendly Democratic administration,” Jim says, “could cause markets to plummet. Trump will be acquitted by the Senate in a trial, but markets hate one thing: uncertainty. Major volatility could follow.”

How to prepare? “This is a good time to lighten up on equity exposure,” says Jim, “and reallocate to bonds, cash and gold.”

As interest rates continue to decline, “U.S. Treasury notes, especially the 10-year note, are in a sweet spot and can produce significant capital gains before year-end. High-grade corporate bonds from rock-solid issuers like Exxon Mobil, IBM and Apple can produce slightly higher yields without much credit risk.”

Meanwhile, cash in the form of short-dated T-bills will give you protection in case falling inflation rates turn into outright deflation. “An allocation of perhaps 30% of a portfolio to cash would be prudent in these highly uncertain times.”

And finally, there’s Jim’s long-standing guidance about a 10% portfolio allocation to gold. A 10% portfolio allocation to gold is ideal to take advantage of where Jim sees gold going from here: “The bear market in gold was over in 2015. The new bull market in gold is still in its early stages.” As he said here just yesterday, Jim anticipates $2,000 gold next year and up to $5,000 by 2022.

[Ed. note: Jim’s unique brand of analysis can not only protect you from uncertainty and volatility. It can also hand you staggering gains in a time frame of weeks or even days when you apply a very precise strategy — one Jim developed when he was working with the CIA in the early years of this century.

Learn how it works when you follow this link. Please note that due to the sensitive nature of the material presented, Jim’s publishers are taking the link offline tonight at midnight.]

OK, about that mild panic: As we write, the Dow is down nearly 400 points at 27,411. The Big Board is now down 2.6% from its record close the day before Thanksgiving.

On top of the president’s remarks about trade with China is word the White House is proposing 100% tariffs on $2.4 billion of French goods, including wine, cheese and handbags. It’s retaliation for a French tax on “digital services” that would hit U.S. tech giants.

“I don’t want France taxing American companies,” says the president. “If they’re going to be taxed, it’s going to be the United States that will tax them.”

Uh-oh: The Federal Reserve is looking to revise its inflation target upward from the 2% goal that’s been in place since 2012.

For the moment, we’ll leave aside the insanity of the Fed deliberately trying to tank your purchasing power by 18% every decade in pursuit of economic “growth.” Our point today is that for the most part, the Fed has fallen woefully short of its own mark… 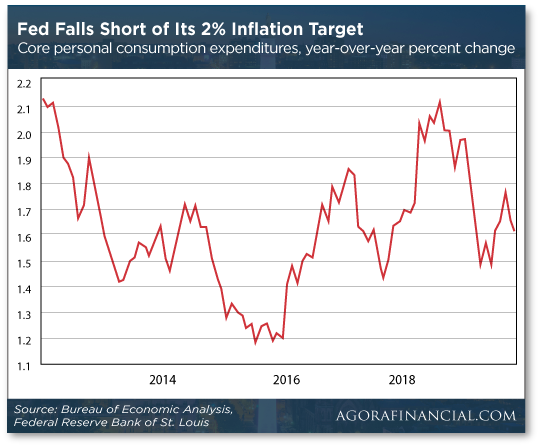 That’s a chart of “core PCE,” the Fed’s preferred measure of inflation. No, it bears no resemblance to your own cost of living, for a host of reasons. (Just one example: Its yardstick for the cost of health care is Medicare reimbursements to doctors and other providers.)

In any event, 2% apparently isn’t enough for the Fed. From the Financial Times: “The Fed’s yearlong review of its monetary policy tools is due to conclude next year and, according to interviews with current and former policymakers, the central bank is considering a promise that when it misses its inflation target, it will then temporarily raise that target, to make up for lost inflation.”

Here’s the problem, and it’s something Jim Rickards pointed out to your editor in one of our first conversations years ago: If the Fed decides to aim for, say, 3% inflation, that can change the psychology of everyday Americans very quickly. They’ll spend more freely, purposely exchanging their depreciating money for things of value. The process feeds on itself and suddenly 3% inflation becomes 5–6% inflation.

What then? The fed funds rate is currently 1.75%, still very low on a historical basis. It’s not as if the Fed could suddenly triple the rate to choke off the developing inflation.

Granted, it’s all theoretical for now. But it’s not too soon to think about…

We pause now to eulogize a victim of Trump Derangement Syndrome. 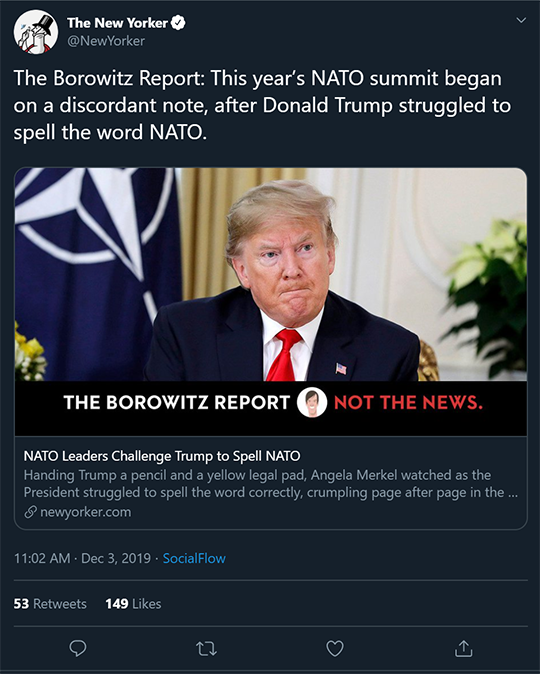 We recall a time when New Yorker satirist Andy Borowitz was funny. Then Trump came into office and it was all over. We haven’t seen fit to conduct a proper memorial, however, until this particularly lame tweet crossed our awareness today.

Five years ago, when the Ebola scare was at its height, we cited one of Borowitz’s articles because it was so spot-on…

In 2010, Borowitz wrote an article about Goldman Sachs making “a substantial financial bet against the Gulf of Mexico” the day before the Deepwater Horizon oil rig blew up, killing 11 crew and causing a record oil spill in U.S. waters. The article was complete with a “memo” by Goldman VP Fabrice Tourre: “Suck it, fishies and birdies!”

In light of Tourre’s actual emails that came to light when the SEC pursued him for securities fraud that year, it was perfect satire — just believable enough that years later, gullible people were still sharing it on social media as if it were the real thing.

Anyway, it’s all over now. It’s as if Trump has neutered the sense of humor of both supporters and his critics alike. As he used to say, “Sad!”

To the mailbag, and the Democrats’ proposals to raise the cap on income subject to Social Security tax…

“As a high-income earner in California (until 2016, after which I bugged out to Panama!) I always thought it a bad strategy that they stopped taking Social Security taxes from my paycheck at a certain point.

“While I enjoyed the higher paychecks in the latter part of the year, I didn't need that extra money. And with the Social Security fund projected to be broke right about the time I reach retirement age, it seemed a good solution to help shore up the fund. Why increase taxes on the lower socioeconomic groups who will actually feel the pain of lower paychecks?

“I feel quite certain that the CEOs making 100 times what I was making wouldn't feel financially strained by continued Social Security deductions from their paychecks!

“On another note, The 5 is the only place I get my ‘news’ anymore, so don't listen to the radical right or left who accuse you of political leanings one way or another. It's clear to me you call it like you see it with no political bias whatsoever. So keep doing what you're doing!”

The 5: Yikes, another one? We’ll tell you what we told the fellow last month: The 5 is only part of a well-balanced news and informational diet.

P.S. The next few hours might be your last chance to view Jim Rickards’ interview about the abandoned CIA project that evolved into a powerful predictive tool — one that could give everyday Americans a chance to collect thousands of dollars a week.

Because the content is so controversial, Jim’s publishers are playing it safe: After midnight tonight, this link will go dead.