Bailout Culture: On the Hook for State Pensions

“State and local government employees make up 15% of the U.S. workforce,” said our founding editor Addison Wiggin in 2012. “Imagine a pressure group, 19 million strong, seeing their future flash in front of their eyes.

“Imagine the TV coverage of simultaneous rallies by state employees in Sacramento, Albany, Springfield, Harrisburg and Lansing… hundreds of thousands of people gathered in unison… demanding Washington bail them out.”

We’ll revise the 15% figure to 21% today — but Addison’s flight of fancy is still relevant and might become a reality in the very near future.

If you’ve been reading The 5 for any length of time, you know the failing state pension system is more than a stretch of the imagination: The system’s been grievously underfunded for decades now.

The latest state pension progress report from the Pew Charitable Trusts (released in June, using data from 2017) is unnerving — particularly if you’re one of the 21% mentioned above. 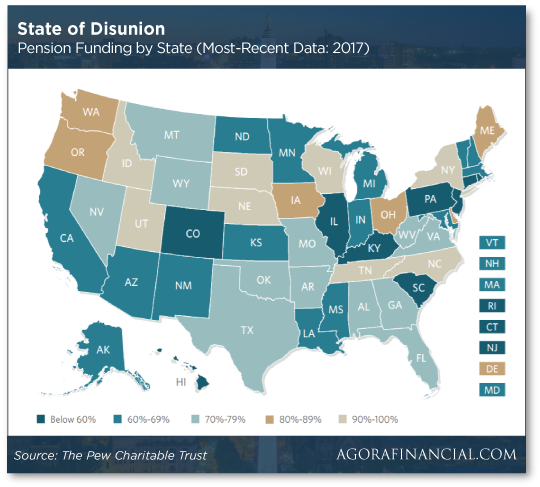 The long and short? (And by short, we mean short.) “Just eight states were at least 90% funded while 24 were below 70% funded,” the report indicates.

Drilling down further, when comparing the top three state pension funds with the bottom three, a clearer picture of the crisis emerges.

The three top-tier programs — namely, South Dakota, Tennessee and Wisconsin — have been funded near 100% since 2013.

Ranked in the bottom three positions, Illinois, Kentucky and New Jersey have dropped from about 50% funded in 2013 to just about 38% in 2017. (Keep reading for more on these three state pensions in 2018.)

And what really boggles the mind is the three worst-funded state pensions have incrementally taken in more money… yet continued to slide. According to the Pew report, these states "had an average employer contribution rate of more than 31% of payroll in 2017— a 22 percentage point increase since 2007."

At this point, it’s just a matter of time before states beseech Uncle Sam for a bailout.

"I think the federal government is going to have to do something about this,” says Marc Levine, former chairman of the Illinois State Board of Investment.

“I think ultimately there will be some kind of grand bargain where they freeze benefits in exchange for federal money,” Mr. Levine concludes.

To wit, we say — doing our best “Linda Richman” impersonation (classic SNL, folks) — it is neither “grand” nor a “bargain.” Discuss…

We’re thinking about 80% of taxpayers — who’re not in line for government pensions but might be on the hook for state shortfalls anyway — won’t be saying: “Grand! What a bargain bailout!”

On the subject, one of our favorite journalists, Matt Taibbi, says the legacy of 2008 bailouts, supposedly a short-term tourniquet for a bleeding economy, has become a perpetual failsafe:

What we actually ended up doing was the exact opposite: committing American taxpayers to permanent, blind support of an ungovernable, unregulatable, hyperconcentrated new financial system that exacerbates the greed and inequality that caused the crash, and forces Wall Street banks like Goldman Sachs and Citigroup to increase risk rather than reduce it. (Emphasis added.)

We expect a different outcome from a state-pension bailout? What?

For more on the assault of state pensions, we turn to our income specialist Zach Scheidt, who says: “As interest rates continue to trend lower, pension funding levels will continue to deteriorate.

“With lower interest rates, it's more difficult for pension plans to generate enough income to pay current and future retirees,” Zach says. “After all, these pension funds are earning barely 1–2% on government debt.”

Looking at the chart below, the money allocated for retirees — in five state pension funds — is woefully inadequate… 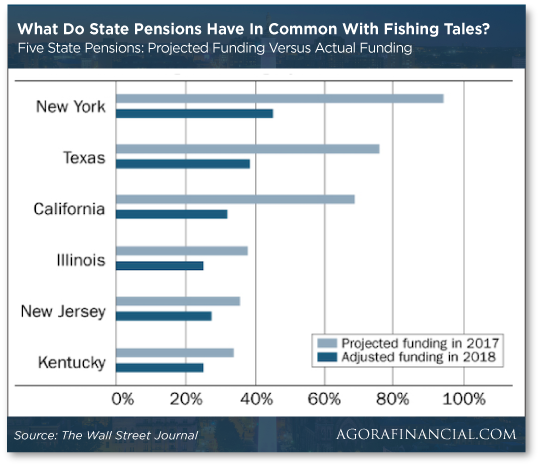 New York, for example, has just 45% of the funds it needed in 2018 to fulfill promises to retirees; that’s roughly half the projected funding in 2017.

“This irresponsibility is especially egregious when you consider where things are in the market right now,” Zach says. At last check, the S&P 500, the Dow and the NASDAQ-100 are up 25%, 19.5% and 32%, respectively, this year.

“You would think that with such a favorable market environment,” he continues, “pension plans would have made great profits, leaving them flush with cash.

“Instead, state and local governments have spent money on other projects, essentially ignoring the responsibility they have to retirees.”

Zach says: “The key point… is that you need to take ownership of your retirement. Don't count on the bogus pension fund or Social Security promises.

“There simply isn't enough money for most of these promises to be met,” he says.

On the flip side, Zach’s always in favor of building a portfolio of promising dividend-generating stocks that’ll produce reliable income.

The best part? “With interest rates falling,” he says, “more investors are looking for ways to generate income from their savings. And that’s causing a lot of money to move out of bank savings accounts and into dividend stocks that pay higher yields.

“This trend is just beginning. So if you invest now, ahead of the wave of new capital that is headed into these dividend stocks, you'll be in a position to gain from the rush,” Zach concludes.

“If you are proactive today,” he says, “you can still live the successful retirement that you've dreamed of.”

But *record needle scratch* there’s some loca in homebuilders’ vida, too…

“While we are seeing near-term positive market conditions with a 50-year low for the unemployment rate and increased wage growth, we are still underbuilding due to supply-side constraints like labor and land availability,” says National Association of Home Builders chief economist Robert Dietz.

Nonetheless, taking a glance this morning at the big homebuilder ETF — iShares U.S. Home Construction (ITB) — it’s firmly in the green… and up over 50% so far this year.

Will Netflix offload 4 million U.S. subscribers in 2020, the cost of attrition in the battle for streaming supremacy? So says Needham & Co.’s Laura Martin, who downgraded NFLX stock from neutral to underperform last week.

And you’re not going to like Ms. Martin’s solution…

“She argues that Netflix needs a lower-priced tier of its own in order to maintain its market position and support its stock, and that given the company’s balance sheet, Netflix should consider supporting this tier with advertisements,” MarketWatch reports.

While we grumble at the prospect of ads interrupting episodes of our current favorite The Crown, Martin’s solution is certainly workable. “A cheaper tier may attract lower-income customers, convince some password sharers to pony up for their own accounts and help eventually funnel consumers to one of Netflix’s more expensive ad-free plans,” says MarketWatch.

But don’t make tracks to sell your Netflix shares yet: Martin’s just one of four analysts — out of 43 total — who expect bearish things to come for NFLX in 2020.

According to mainstream sources, the markets are high-fiving over “phase one” of the tenuous trade war agreement. (Cue the bright-eyed, grinning stock bros.)

Iconoclast investor James Altucher reports on a milestone for autonomous vehicles: “A self-driving truckload of butter made its way from Tulare, California, to Quakertown, Pennsylvania.”

The truck completed the 2,800-mile trip in three days… and that factors in driving through the remnants of a polar vortex. (Or was it a bomb cyclone? Heh.)

“The accomplishment represents an important step toward the commercialization of self-driving vehicles,” he says. “For investors interested in autonomous tech, long distance trucking is an attractive corner of the market ― it could be the biggest beneficiary of autonomous technologies in 2020,” James concludes.

Last week, our pot-stock authority Ray Blanco was on scene in Las Vegas at MJBizCon 2019 — the biggest event of the year for marijuana.

“The conference brings together a who’s who list of marijuana experts and executives. Many of whom I have developed strong relationships with over the years,” Ray says.

As for one relationship, Ray stepped away from the convention to visit the home base of Green Leaf Farms, one of the biggest legal grow operations in Nevada… and just minutes away from the Vegas Strip. “When you walk into the lobby,” Ray says, “Green Leaf Farms looks like any office building. You wouldn’t know that behind a couple secure doors, thousands of marijuana plants are growing!”

In fact, Ray got a bird’s-eye view of Green Leaf’s “mother” plants, “the genetic baseline cannabis plants that get cloned to produce the plants that are actually cultivated for sale. 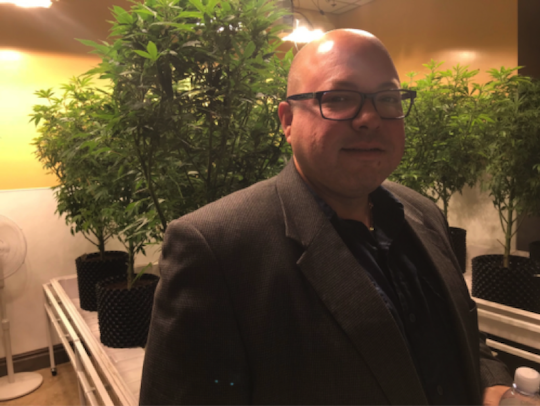 “This approach — using mother plants and clones — results in crops that… grow at the same predictable rate and mature at the same time.” All of which stabilizes the marijuana industry.

And “while it’s easy to get caught up in… new strains, new extraction methods and [more]…”

Ray says: “One of the biggest takeaways from MJBizCon is that legal cannabis… is so new it isn’t beholden to the billionaire boy’s club corporate culture that many established, old-guard industries are victim to,” he says.

In fact, the industry has opened doors for marginalized groups to take part in the entrepreneurial experience. “This aspect of the cannabis industry, one that gives people… hope for a better life and more opportunity, makes this industry unique,” Ray notes.

A uniquely level playing field “that goes for… those working to grow the industry and those investing in it.”

“Not true,” a reader says. “Given that a huge amount of greenhouse gas comes from the meat and dairy industries (beef, pork, poultry, etc.), any individual can take a stand and actually put a stop to greenhouse emissions by eating a totally plant-based diet.

“If we all did this, it would almost instantly heal the planet. Side benefit: If the planet gets healthy, so do we, solving our health care crisis.”

“No, keep on the track that you have taken, Dave. As a scientist, who specialized in methane, you are dead right.

“Thanks for your clear, factual writing.”

P.S. As a 25-year trading floor veteran, Alan Knuckman says NOTHING compares with the success or euphoric high of a life-changing trade.

Now Alan’s unleashing a strategy he says might do just that: Change your life. And he’ll explain everything in a special, one-time only training event happening TOMORROW, Dec. 17.

Please click here for the full details and to be added to our special event series (you can always opt out at any time). This news can’t wait, though… so sign up TODAY.