We Told You So… But Did You Act?

Someone hauled in more than $2.4 million in pure profit from the trade-war news that broke last Friday. And maybe you collected a small windfall of your own?

We rewind this morning to late October. The trade-war headlines were grim. Prospects for any kind of agreement were nil.

Then came the note from Alan Knuckman, our 28-year veteran of the Chicago trading pits. “Mark my words: The trade war is over.”

We were caught off-guard because Alan is mostly a chart guy. He almost never makes big predictions in the realm of politics or policy. But he was certain Washington and Beijing would come to terms sometime before Friday, Dec. 20 — tomorrow.

We spotlighted Alan’s forecast in the Nov. 1 episode of The 5 — and how you could act on it. Today, we follow up.

How did Alan know? “A huge anomaly hit the market,” he explained. “And our indicator caught it.”

This indicator can identify huge market moves that would otherwise go undetected.

So amid all the trade-war gloom that dominated the headlines in late October, Alan said, “those familiar with the matter know how close we are to inking a deal… And you better believe they’re going to make money off it if they can.

“These insiders are tricky, though; they don’t want to risk tipping off the rest of the market.

“So instead of buying up stock that can be easily spotted, they’re operating in the options market,” he went on to explain.

“That’s because while regulators can easily spot individuals trading a large block of stock shares, they can easily miss the smaller amount of options needed to bank a massive gain.

“And the best news for us: My indicator tracks these moves in the options market, alerting me when there is any unusual buying activity concentrated on certain stock options.

Makes sense. While U.S. stocks would get a lift from a trade deal, “the real winners will be Chinese stocks,” Alan ventured. “The U.S. is China’s biggest trade partner, after all. Therefore, the best way to profit from a deal is to get into those Chinese stocks.

“ETFs track the moves of a collection of stocks and are more prone to gain from trends instead of individual company news.

“If you knew that a deal was coming, Chinese ETF options would be the best place to secretly set yourself up for major profits when a deal is announced,” said Alan.

So in late October, someone bought $1.5 million worth of EEM December 2019 $44 call options. This person or persons were all but certain EEM would climb higher than $44 by Dec. 20 — tomorrow — the expiration date for those options.

As you know, Washington and Beijing came to terms on a “phase one” trade agreement a week ago today — something both sides confirmed the next day.

This enormous $1.5 million trade was placed on Monday, Oct. 21. The options traded that day for 30 cents. When we checked our screens yesterday, they traded for 79 cents. That’s a 163% gain in just under two months. That $1.5 million was transformed into more than $3.9 million.

If you followed through on this information when you read The 5 on Nov. 1, your entry price wouldn’t have been as good the insiders — more like 47 cents. And if you bailed last week after the news broke, you’d have sold those options for 56 cents.

That’s still a 19% profit in only six weeks. If you’d held out until this week, your gains would have been even better.

So there’s a taste of the power behind this indicator.

Of course, we reserve the good stuff — the most lucrative trades this indicator uncovers — for paying subscribers of The Profit Wire.

Alan and I joined forces to launch this service last summer. To date, we’ve closed out 23 trades — and 21 of them have been winners. The average gain is 54.6% — including the two losers — and the average holding time is 32 days.

Curious to learn more about how this indicator works — and what it can do for you in 2020? Follow this link and I’ll walk you through it.

Gold languishes at $1,476. Crude has pushed past $61 for the first time in three months.

The big economic number of the day is existing home sales — which rings in way lower than expected, down 1.7% in November. That’s not a marker of a weak housing market as much as the fact there’s just not enough supply to meet demand right now. As we noted earlier this week, there’s a boom in new home construction, and homebuilder stocks are rallying hard.

As was the case yesterday, we don’t have much to say about impeachment — except to marvel at the possibility Donald Trump could be re-elected… and then re-impeached.

Heck, at this rate, the gods could just keep us all in an impeachment loop unto eternity…

Now for a development that will do nothing to reinforce your faith in financial markets.

The Times of London reports that throughout 2019, hedge funds had early access to an audio feed of press conferences held by the Bank of England — Britain’s central bank.

We’re talking about a gap of between four and eight seconds before the press conferences were seen and heard by the rest of the world — but that’s ample time in which high-speed traders can act and make millions on tiny market moves.

The audio feed exists as a backup in case the video feed fails, we’re told. The Bank of England says one of its suppliers “misused” the feed and has now disabled that supplier’s access.

No, no word on the identity of the supplier… or which hedge funds had access. Transparency.

How is a cashless society supposed to function without internet? We might soon find out in India.

Huge protests have broken out across northeast India in recent days — backlash against a new law governing immigrants’ access to citizenship. (It’s complicated, but in short, India’s Muslim minority says it’s an act of discrimination by the Hindu majority.)

To try to quell the uproar, Prime Minister Narendra Modi put out the following tweet… 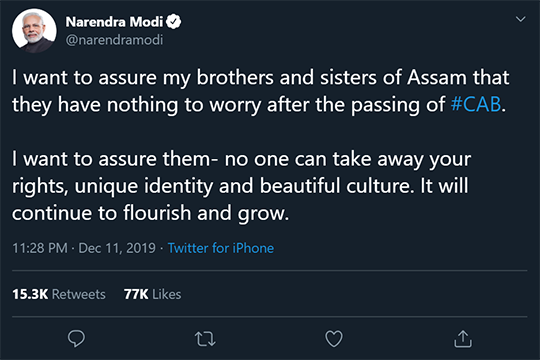 Problem is, the protesters likely never saw that tweet — because the government shut down the internet in the cities where the protests were the most intense.

India routinely resorts to internet blackouts whenever the government seeks to “restore public order.” An Indian website called Internet Shutdown Tracker counts 95 such events throughout the country this year. In the often-tense region of Kashmir, a blackout’s been in force since early August.

Now if you’ve been with us for a while, you might recall Prime Minister Modi’s cash ban of November 2016. About 85% of the banknotes in circulation were suddenly declared null and void; people had to go to the bank to exchange them for new paper currency, or deposit them in digital accounts.

Many Indians took the cue and acquired inexpensive smartphones for the first time, the better to conduct their day-to-day transactions digitally.

But what are they doing while the internet is down? How easily can they revert to cash? Alas, we don’t see much reporting that answers this question. We’ll keep an eye out.

We find the whole thing a little chilling. We also recall the words of Joe Lieberman eight years ago when he was still in the Senate — and chairman of the Homeland Security Committee. “Right now, China, the government, can disconnect parts of its internet in a case of war. We need to have that here too.”

Bureaucracy in action: The U.S. Department of Agriculture has listed the country of Wakanda as a free-trade partner.

In case you’re not aware, Wakanda is a fictional country — first featured in a Marvel comic more than 50 years ago, and more recently the home country of the superhero Black Panther.

But there it was on the USDA website — including a list of goods exchanged between the two countries, such as ducks, donkeys and dairy cows.

“[I] thought I misremembered the country from the [Black Panther] movie and got it confused with something else,” says Francis Tseng, who first noticed the oddity. He’s a software engineer who was researching farm tariffs as part of a fellowship application he’s pursuing. 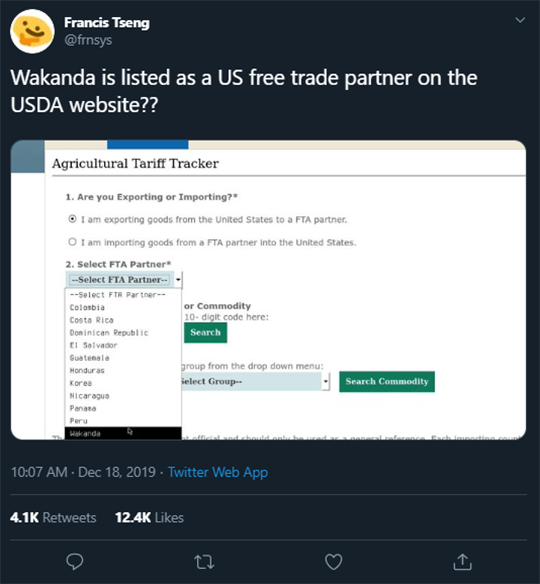 USDA tells The Washington Post that its staff was “using test files to ensure that the system is running properly” and they’ve now been taken down.

Well, at least these “test files” didn’t have any market-moving impact — unlike a similar blunder by the Dow Jones Newswires we documented in 2017.

“So Treasury Secretary Steve Mnuchin says ‘we are not weaponizing the U.S. dollar’?” a reader writes after yesterday’s 5.

“That’s because they already have done so and not just recently.  I read some time back that even foreign diplomats in friendly-to-the-U.S. countries are looked at like they are first cousins to Osama Bin Laden when they try to send their money thru the SWIFT system that the U.S. uses.

“The United States is making more than a few enemies in the first, second and third worlds doing this and they are making a huge mistake.  One day the U.S. is going to need those friends….and they are not going to have them.”

Of course the mainstream acts as if Donald Trump alone is responsible for this alienation but the reality is he’s merely accelerating a process that’s been underway for several years.

Bad for the dollar, good for gold…

“The 5 is my favorite publication, and I read a lot,” says a note of praise.

“You don’t shy away from controversial topics.

“Thought-provoking, informative, interesting, and amusing and entertaining, too.

“The best issue ever was a couple months ago with a chart that showed some financial measurement falling off a cliff — contrary to expectations.  The caption was ‘Holy Mother of God!’.  I haven’t laughed so hard in years.  Thank you!”

We need periodic reminders that a dose of attitude and sarcasm is what makes The 5 The 5.

As we said back in the spring, events are moving so fast these days that it takes up a lot of our bandwidth just making sense of what’s going on. Making fun of it can wind up taking a back seat. But we press on…

About The Profit Wire, the service described above: In the interest of full disclosure, we have two trades expiring tomorrow that will end in the red. So we’ll have 21 winners out of 25 total trades.

But even in the worst-case scenario, the average gain since we launched this service in July is still 42.3% The odds are definitely on your side!

“It gives one a sense of security and confidence of looking forward to being a net winner consistently,” says a satisfied reader.

You can join his ranks and get that same feeling. I’ll show you how when you click or tap here.

“What can explain this bizarre and a-typical behaviour of the gold price?” asks an article at Medium. The gold manipulation story gets more profoundly messed up… Read More

From our lips to the mainstream’s ears: Zach Scheidt called it… and now Big Tech’s shopping spree has gotten underway. Read More

The full-time rumor mill that surrounds every new release of an Apple iPhone cranked up to warp speed yesterday. Read More

A Tale of Two Americas

The Tale of Two Americas in 2020 has morphed into a funhouse mirror image of 2012–14… and it’s common knowledge. Read More

Theater of the Absurd

Financial media folks scratched their heads last week, wondering aloud about the rumor that Amazon was interested in buying AMC… What? Read More

We have seen the future of the American restaurant. And it is sterile… In memoriam of locally owned restaurants. Read More

What if it’s a false choice? What if the whole “saving lives versus opening up the economy” thing is bogus? Read More