Minus Apple and Microsoft

“You can’t open a website or turn on the TV without hearing about new ‘all-time highs’ in the major stock indexes,” Jim Rickards says. “The Dow Jones Industrial Average (DJIA), the S&P 500 and the NASDAQ-100 are all at or near record levels.”

The present-day bull market that started in March 2009 is now one for the record books — the longest bull market in U.S. history. (Ahem… not to discount a few stomach-churning moments along the way.)

But Jim says — and here’s the rub — “Why do so many investors feel left out? Why are so many stocks underperforming the indexes?”

Dave asked then — and we think it’s just as applicable today — “Is that a reflection of a healthy market overall?” Just as important, do exalted market highs translate to your portfolio?

Which brings us to the concept of “the S&P 495,” a phenomenon that started in 2013 when just five stocks overshadowed the entire S&P 500. The Big 5? Facebook, Amazon, Microsoft, Alphabet (Google) and Apple. 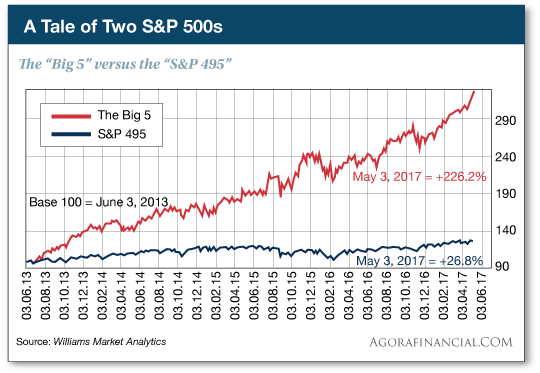 Owen Williams of the research firm Williams Market Analytics said at the time of the alarming growth gap: “This market has become a one-trick pony. It has sure been a good trick… as long as it lasts.

“But the lack of broad market participation concerns us. A market rally built on the performance of just five stocks is undeniably fragile.”

The pony has kept on galloping as 2020 approaches… but how’re those muscles and tendons holding up?

In 2019, just two stocks — Apple and Microsoft — are precipitating all-time highs for the Dow Jones Industrial Average with the two companies making up $819 billion of the index’s market cap.

“If those gains were stripped from the Dow, the blue chip index would be nearly 1,100 points lower than its current level,” according to CNBC. Let’s see, that would leave the Dow at 27,390 today.

“I think we’re in about a 30–50-year technology boom period that we’ll never see in the next 500 years so let’s take those two companies which are very, very positive on growing earnings and margins, and I like that they’re leading not only the technology industry but they’re leading the market,” Bapis says.

In other words, ride them ponies for all their worth! (And bombastic much? We’re projecting 500 years out now? Sheesh.)

Back to market fragility…

Jim Rickards says: “This does not mean you should not own these market leaders; [there’s] good reason for their outperformance.

“Still, it does point to two dangers,” he says. “On the one hand, you cannot take good performance for granted without these leading stocks. On the other hand, concentration in these stocks is highly risky because of overcrowding in the trade.

“If confidence breaks, these stocks will fall fast and take the entire market index with them.”

Jim concludes: “The solution is to have allocations to uncorrelated assets such as cash, gold and private equity. That way you can still have some equity exposure but will have protection through diversification when the market breaks.

“It always does sooner or later,” he says.

No big shocks from the major economic number today: Consumer spending rose 0.4% last month, according to the U.S. Bureau of Labor Statistics, making it the biggest increase since July.

Meanwhile, the core PCE that omits food and energy prices, inched up 0.1% in November. As for inflation, it nominally ticked up to 1.5%, well below the Fed’s 2% target.

The SECURE Act — — passed both houses of Congress Thursday. The act is the most significant piece of legislation affecting Americans’ retirements in almost 14 years; at this point, it’s awaiting the president’s signature.

Again, that’s just a quick rundown; because the SECURE Act covers so much territory, definitely do your homework…

The Bank of England is looking into how audio broadcasts of its press conferences were used to give traders an undue advantage.

The audio was outsourced to a recording company… that then leaked recordings about four–eight seconds before the press conferences were seen and heard by the rest of the world. Plenty of time, Dave said Thursday, for lightning-fast trades to be made on infinitesimal market moves.

Yesterday, the audio source was a mystery. Today? Mystery solved…

Boom… Still no word, however, on which hedge funds signed up for “premium service.” (Oh, that tweet’s been scrubbed from the web now.)

Now the Fed’s assessing its own policies and procedures when it comes to official broadcasts, although the central bank doesn’t outsource its audio. (Plus, there have been very few question marks surrounding what Powell & co. plan to do — Trump’s tweets have mostly provided a road map.)

“For a long time, the SEC has restricted [private] companies from soliciting investments from anyone other than ‘accredited investors,’” says former hedge fund manager James Altucher.

Of course, the SEC’s trying to protect small-time investors from losing their shirts; in the process, Main Street’s also been barred from lucrative deals in private equity funds, hedge funds, real estate and startups.

James points out the size of one’s net worth isn’t necessarily an indicator of an investor’s market savvy.

So the SEC’s considering a landmark change…

James says: “The implications of [this] rule change could be profound and far-reaching.” For one, the size of the investor pool would expand dramatically for private companies.

“This would theoretically have the impact of reducing companies’ reliance on public markets and allow the best companies to stay private for even longer.

“It could also impact the size of private… companies in the process,” says James. “For example, the recent failed IPO of WeWork demonstrates that companies may be susceptible to improper valuation on private markets.”

Had the SEC’s new rule been in place, WeWork’s valuation might continue to grow privately, “enriching its… investor base in the process.”

James’ takeaway? “For educated independent investors, the opportunity to participate in this new market could be massive… and even potentially life-changing.

“With private investments now having the ability to stay private… longer, we could see even more jaw-dropping valuations on private companies available to small individual investors.”

WeWork founder and former CEO Adam Neumann is getting outta Dodge… NYC, to be precise.

The 40-year-old surfer chic-loving entrepreneur has pulled up stakes from the city he calls home to get away from “negative energy” surrounding the WeWork fiasco that’s left thousands unemployed this Christmas.

But don’t worry about Neumann — he made off like a literal bandit with $1.7 billion that he’s using to jetset across the globe. 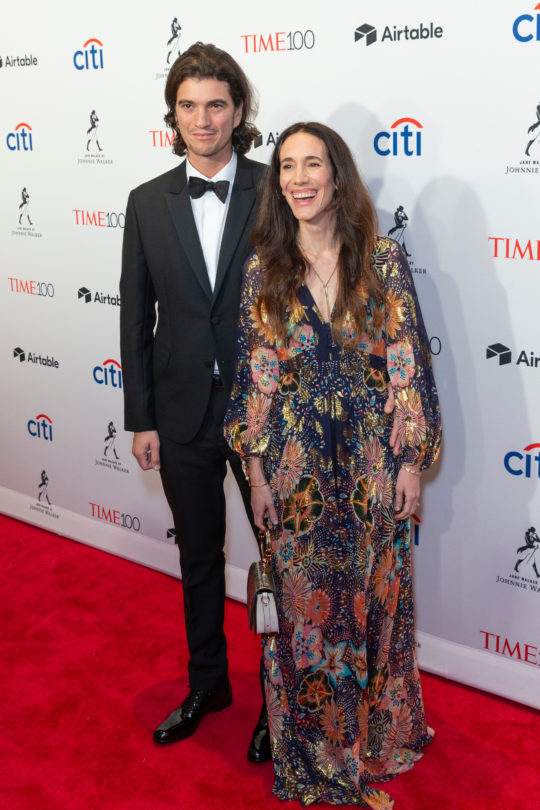 The most snowflake thing ever: Escaping “negative energy”

In order to do so, Neumann and wife, Rebekah, withdrew their five kids from the pre-kindergarten through fifth-grade school — called WeGrow — that Rebekah helped start.

[In case you’re interested: WeGrow opened its doors in September 2018. It’s mission? To teach kids about “entrepreneurship and spirituality.” Umm… which doesn’t come cheap, apparently. One year at the tony Chelsea school will set you back $42,000. But — hold the phones — the school announced it’s closing. Just more collateral damage from WeWork.]

The New York Post reports: “The family has been traveling on rented planes with an entourage that includes several nannies, a housekeeper and security.”

“It’s not easy to travel the way they do,” a source noted.

“It has been going on since the Earth was created! Global warming is a farce, as was proven by the fudged numbers Al Gore was spouting!

“I live in Cottonwood, California — true Northern California — far north of Sacramento and the Bay Area. The last three decades have been cooler than the previous decades of recorded history here.

“In fact, the news agencies around here don’t (or won’t) compare the temperatures earlier than the ’80s. The ’70s had 120-plus degree temperatures in the summer. This year, we have had two snowstorms; that’s never happened before in recorded history.

“In February, we had more snow here than ever. I had more than two dozen oak trees come down — some on the house, out buildings, etc.

“Don’t get me wrong, I don’t like pollution, and it can be curbed by sensible, noncostly, nongovernment mandates.

The 5: We don’t mean to pile on Al Gore… but we had to mention the time Gore’s Nashville home was found to use enough energy in one year to power the average American home for 21 years. Politicians, right?

Have a great weekend!