A Sugar High Is Still a High

“Based on the stock market history of the past century, this raging bull market has a long way to run,” ventures Alan Knuckman — our eyes and ears in the Chicago options trading pits.

After geopolitical events so rudely interrupted us on Friday, we return today to the Agora Financial team’s 2020 predictions. Let’s go…

Eleven days ago — when the Nasdaq surpassed 9,000 for the first time — Alan appeared on Fox Business and said the stock market rally that began in March 2009 remains on track. 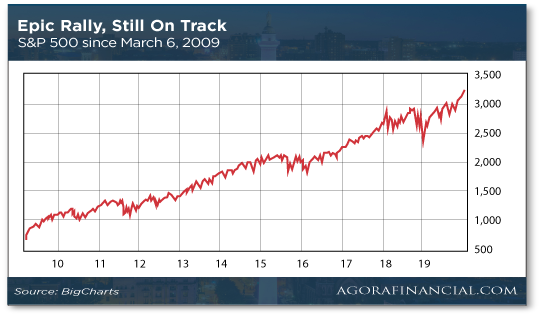 Alan made a simple and eloquent point about 2019: If the S&P 500 could rally 29% during a year when corporate profits were shrinking… there’s no reason it can’t continue rallying as corporate profits return to growth.

“This is a trend that’s been on a track here for almost 10 years and it looks like we’re going to see a lot more as the ‘earnings recession’ that we saw in 2019 is alleviated. We’re actually going to see earnings growth, and that’s truly what drives the stock market.”

We pay special heed to Alan’s outlook here because of how right he got 2019.

Let’s rewind to an earlier appearance he made on Fox Business — Dec. 24, 2018. That was the day of the Christmas Eve massacre, when the market took a spill of nearly 3%. The losses might have been even steeper were it not for the fact that per Christmas Eve tradition, trading closed three hours early.

In less than three months, the market had tumbled just shy of 20% — the traditional definition of a “bear market.”

“Let’s get back to some of the fundamental facts. If you look at the price-earnings ratio on stocks, we’re at about 14 and a half right now. We’re down about the 10-year average. So stocks are cheap. Let’s remember stocks are not the economy, and right now they’re at a super discount. So stuff your stocking!”

Alan would be the first to tell you it’s a fool’s game to pick precise tops and bottoms in the market… but as it turns out, Christmas Eve marked the bottom. 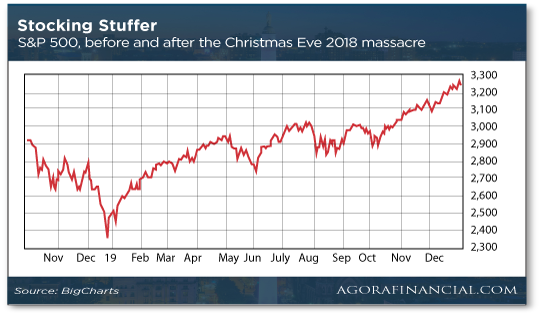 “There’s no fundamental reason why stocks won’t continue to climb. Remember, markets can always go a lot higher than you think,” says Alan.

Perhaps you object that corporate earnings are floating on a cushion of funny money created by the Federal Reserve.

Back to his Fox Business interview 11 days ago: “I think the next thing policymakers will do — and we’ve heard the president talk about this — is knock down the dollar a bit. I think that’ll be the next stimulus, and that’ll give the stock market another big kick.”

Remember, a weaker dollar is juice for the earnings of multinational U.S. corporations. A weaker dollar makes their goods and services cheaper to foreign buyers.

But what about the market tumble on Friday, you ask?

For sure, stocks fell on Friday after a U.S. drone strike took out the second-most powerful man in Iran’s government. Events like that breed uncertainty, and markets don’t like uncertainty.

Breathe, Alan says: “A 0.75% pullback in the markets one day after record all-time highs shows remarkable resiliency in the U.S. market right now. And even after recent escalation following the air strike, the S&P 500, Dow, and tech still finished positive on the week.

“The list of crises that have been overcome in the last 10-plus years is long. And it’s been costly to the naysayers and nonbelievers. It just goes to show that volatility is opportunity and that there’s money to make when markets move. This market unwind is just a chance to reload on a minor stock slide.”

To make the most of what 2020 has in store, Alan has just rolled out a new trading strategy — with money-doubling opportunities every trading day. That means you can get started tomorrow morning… and potentially double your money inside of a month. Alan shows you how this revolutionary strategy works as soon as you follow this link.

By and large, the major U.S. stock indexes have arrested that Friday slide this morning.

At last check, the Dow was down less than a third of a percent… the S&P 500 was down microscopically… and the Nasdaq was slightly in the green.

Crude has stabilized after the big jump Friday, a barrel of West Texas Intermediate now $63.44.

In early trade, gold powered ahead to $1,573 — surpassing last year’s highs. But now the Midas metal has surrendered some of those gains and the bid is $1,564.

No big economic numbers today; the monthly job figures are due Friday. Earnings season gets underway in earnest a week from tomorrow.

For the record: Traditional corporate pension plans just notched their best year since 2003… and they’re still deeper in hock than before.

According to figures from the consulting firm Willis Towers Watson, the typical defined-benefit plan at a Fortune 1000 company collected investment gains of 19.8% during 2019.

Unfortunately, the typical plan also ended the year further in the red: Assets totaled only 87% of liabilities in 2019, down from 88% the year before.

Turns out the 2017 tax law stripped away a big tax break that gave companies an incentive to shore up their plans. “Employers’ plan contributions plummeted by 52% to an estimated $26.3 billion from the previous year,” says a Wall Street Journal story that got buried in its Saturday edition.

We’ve been warning for years about underfunded corporate pensions. The Pension Benefit Guaranty Corp. — which is sort of the FDIC for private pension plans that get in trouble — is woefully underfunded in its own right. Whenever the next recession rolls around, a taxpayer bailout isn’t out of the question. Consider yourself on notice.

“The government can just block the internet without thinking about the consequences for millions,” says Abhijeet Mukherjee, an online entrepreneur from India.

Nearly three weeks ago, we took note of how India’s government shut down the internet in several regions hit by protests against a new citizenship law — including parts of the capital New Delhi.

We were especially interested in light of the government’s explicit aim since 2016 to nudge India’s 1.3 billion people toward a cashless society, using inexpensive smartphones to conduct their day-to-day transactions.

But how, we wondered, is that supposed to work when India also routinely resorts to internet blackouts anytime the masses become restive? (By one count, there’ve been 350 such instances since 2014.)

At the time, we didn’t see much in the way of news answering that question. Now we do.

“With the longest government-enforced cyber darkness in the largest democracy in the world, companies relying on tech to run their business were the biggest losers,” says a report from the Analytics India Magazine website.

Back to Mr. Mukherjee — who says his “entire work is on the internet” — on the 20th of December…

“In today’s connected world, when you shut down the internet, people cannot do banking, no transactions take place, people face issues in transportation,” says Rajan Mathews of the Cellular Operators Association of India. “It affects daily life to a very large extent and therefore it should be used as a last resort.”

Good luck getting a cab without internet in India these days, never mind getting meal delivery through Swiggy or Zomato — which are India’s version of Grubhub and DoorDash.

Yes, cash hasn’t been outright banned in India… so the economy can kinda sorta keep bumping along. But for how long will that continue to be the case? And then what?

We’ll stay on top of the story, as we have from the beginning. Reminder: Given how the scheme was hatched in part by the U.S. Agency for International Development and the Gates Foundation… some variation on this scheme could be coming to a country near you.

To the mailbag, and feedback after we furnished some instant context to Washington’s waxing of Iran’s Gen. Soleimani.

“As a 20-year retired Naval officer, I take exception to the way you are portraying the mindset of our military troops.

“First, those who serve do so knowing that at any given time their lives are at risk and may be in danger. We take on that role willingly and do so so that people such as yourself can sleep safely at night. I’m sure those who are ‘in the area’ have this under control… Let’s let them do what THEY, not you, know best. I know I’ll sleep well tonight.”

The 5: OK, we’ll concede we went too far projecting the mindset of the troops. So we’ll revise what we said to make the same point.

Revision: “There are roughly 5,000 U.S. troops in Iraq. They are potentially at greater risk of attack now than before. Their commanders, even more so.”

As far as your entreaty that “Let’s let them do what they, not you, know best”… the implication is that only military personnel and “policy professionals” should have a say about Washington’s role in the Middle East. That is, the military-industrial-surveillance complex — our fourth branch of government that’s mushroomed since the late 1940s — should be allowed to go about its business without any “interference” from us peons. We’re just citizens and taxpayers, after all.

Interesting, that. We suspect the Founders, ever suspicious of standing armies, might beg to differ…

“Come on, folks!” writes a self-described longtime subscriber. “How can you give any credence to the contrived parallel between the assassination of the Archduke Ferdinand and the take down of Soleimani?

“The article you cite is incorrect: The nations did not ‘scramble to take sides’ after Sarajevo… Those battle lines had been drawn for over a decade. If you must do Google searches, try ‘Entente Cordiale’ or ‘Franco-Russian Alliance’… Better still, turn some actual pages and check [out] the great classic, European Alliances and Alignments by William L. Langer… an old book, but still spot on.

“It’s also no surprise that the archduke search came up so much in the D.C. area… Any chance that would be the media herd schooling up a bit before they start to mindlessly repeat a narrative chant invented by some puppet master?

The 5: For crying out loud, we weren’t “giving credence” to the article; we were simply taking note of an oddity among the blinkered Beltway class. We found the historical “parallel” just as bizarre as you did.

And yes, the alliances were building up for decades before WWI. Who’d have guessed that France would form an alliance with Czarist Russia — where performances of “La Marseillaise” had long been banned!

P.S. What if you got a text tomorrow morning, right before the market opened, with simple instructions that could double your money over the following 30 days?

And what if you got a similar text, laying out a similar opportunity, every day the market trades?

We’re still offering a charter-member discount… but not much longer. Click here and check it out for yourself right away.