At this stage, gold is seriously “overbought” — which is a fancy way of saying it’s run up too far, too fast.

There are actual metrics to determine whether an asset is overbought or oversold, but we won’t make you glaze over with that today. The point is that in previous times when gold was overbought to the same degree it is now, a 1% pullback soon followed.

“Why wouldn’t you want to see gold blow off a little steam here? After all, gold’s big breakout from its six-year base happened way back in June 2019 as it streaked toward $1,400.”

As usual, we include Greg’s helpful annotations with the following chart. 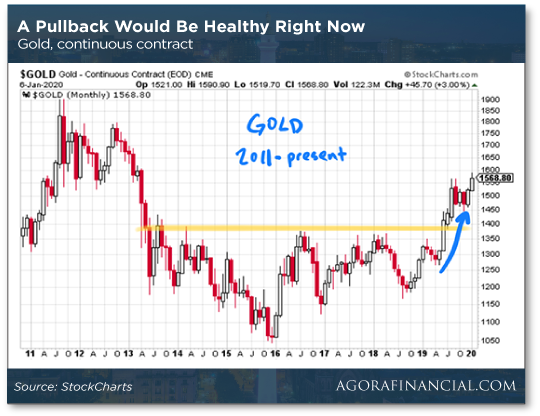 In other words, last summer was the “tell” something big was afoot. “That was your cue that something was changing,” says Greg — “not the push to seven-year highs we’ve witnessed over the past few weeks.”

We summarize where gold’s been in recent months by way of introducing our macro maven Jim Rickards’ big call for 2020.

Late last year, we gave you a glimpse at another of Jim’s 2020 predictions — that the effects of the Federal Reserve’s shift toward looser monetary policy will kick in around midyear, just in time to give Donald Trump a boost going into the final stretch of the election campaign.

And it’s the Fed that figures into Jim’s gold outlook: “Gold prices should accelerate around March 2020. That’s because the Fed is likely to be cutting rates again by then, or at least telegraphing more rate cuts.”

The next move down will push “real interest rates” well below zero.

Don’t be put off by the terminology: “Real rates are the short-term Treasury bill minus the inflation rate,” Jim explains.

“In 2019, the yield on 1-year Treasury bills fell from 2.6% to 1.6% as the market reacted to Fed rate cuts. Over the same time, the official CPI inflation rate stayed roughly the same, near 2%.

It only makes sense if you think about it: If you’re looking to put a pile of money in a “safe” income-producing asset… but that asset is a guaranteed money-loser because of negative real rates… you might as well put some of that money into an asset that will preserve your wealth under the circumstances.

Goldman Sachs was in your face about this phenomenon in a report it issued last month: “If an individual is trying to minimize the risks of sanctions or wealth taxes, then buying physical gold bars and storing them in a vault, where it is more difficult for governments to reach them, makes sense.”

No, the world’s wealthiest don’t talk much about their gold. When they hobnob at places like Davos, Switzerland, “they like to discuss their investments in Apple, Amazon, Treasury notes and other stocks and bonds,” Jim says. “They love to ‘talk their book’ in the hope that other investors will piggyback on their trades, run up the price and produce more profits for them.”

But they clam up about gold, even though they own it. Why?

“I worked on Wall Street and in the hedge fund industry for decades,” Jim explains. “I also lived among the players in New York and Greenwich, Connecticut, at the same time. I’ve met the top hedge fund gurus in private settings. Some are clients. Some are friends.

“I’ve never met one who does not have a large hoard of physical gold stored safely in a nonbank vault. Of course, they won’t say so on TV because they don’t want to spook retail investors into dumping their stocks and bonds.”

But there’s no reason you can’t follow their lead. “If gold bullion is the go-to asset for billionaires, why don’t small investors have at least a 10% allocation to gold and silver bullion just in case? Some do, but most don’t. They’ll find out the hard way what individuals have learned over centuries and millennia. Gold preserves wealth; paper assets do not.”

If you don’t have your 10% allocation, best get moving before the Fed lights a new fire under gold in March.

And if you do have your 10% allocation, you’ll want to take your portfolio to the next level — following an options strategy Jim honed during a secret “financial warfare” project during the early years of this century.

Jim shows you how it works when you click here. But given the sensitive nature of the information, we’re keeping it online only through midnight tonight. So give it a look right away.

The big economic number of the day is the ISM services index. Unlike the ISM manufacturing index, this number remains solidly above 50 — indicating continued growth. In fact, at 55 the number is the strongest in four months.

Crude is pulling back — down about 1% to $62.63 as the Iranian government bides its time before countering the U.S. killing of Gen. Qasem Soleimani.

One clear loser from the latest trouble in the Middle East is Saudi Aramco — Saudi Arabia’s state-owned oil giant.

Less than a month ago, Aramco floated shares on the Saudi Arabian stock exchange — the biggest IPO anywhere, ever. Now Aramco’s share price is down 12% from its high — with a sizeable chunk of that drop coming since Soleimani was taken out on Friday.

As the Financial Times explains, “Growing tensions between the U.S. and Iran have brought the specter of a potential attack on the country’s oil infrastructure back to the forefront. Tehran was blamed for a drone strike on Saudi Aramco in September that temporarily knocked half the kingdom’s crude output.”

Not mentioned in the FT story is the fact that since that September attack, the Saudi Arabian and Iranian governments had been trying to dial down the tension.

Not a peace treaty or anything of the sort — but at least a pullback from the proxy war the two regimes have waged for years in Iraq, Syria, Lebanon, Yemen, Bahrain and elsewhere across the Middle East.

During a speech to the Iraqi parliament on Sunday, Prime Minister Adil Abdul-Mahdi said Iraq was acting as an intermediary in those talks… and that Gen. Soleimani had arrived in Baghdad last Friday to deliver Iran’s response to Saudi Arabia’s latest overture.

Indeed, Abdul-Mahdi claimed Donald Trump had called to personally thank him for his mediation efforts — even as Trump’s team was plotting to kill Soleimani within minutes of his landing in Baghdad.

As we write this morning, Secretary of State Mike Pompeo is denying to reporters on live TV that Soleimani was on a diplomatic mission to Baghdad. It’s also Pompeo who’s been out front citing so-called intelligence that claimed Soleimani was plotting an “imminent” attack on U.S. targets in the Middle East and had to be taken out.

Why should we believe any of it? As Tucker Carlson said on his Fox News show last night, “Seems like about 20 minutes ago, we were denouncing these people as the deep state… Now for some reason, we do trust them, implicitly and completely."

Anyway, Saudi Aramco needs quiet in the Middle East if it’s going to thrive as a publicly traded company and fulfill its core mission of funneling boatloads of money to the princes in Riyadh. That’s why Riyadh was trying to calm the waters with Tehran in recent months.

Now the princes must be wondering how reliable an ally they have in Washington. Ironic, no?

For the record: Your chances of an IRS audit are less than half of what they were a decade ago.

Or so we’d conclude from figures released yesterday. The IRS audited 0.45% of individual income tax returns during fiscal 2019 — a steep drop from the 1.1% rate in 2010.

Turns out the IRS’ budget is about 20% lower now than it was then, after accounting for inflation. The IRS’ workforce is about 28% smaller. And its workload has grown, given the complexities that Obamacare introduced into the tax code. (See, there’s an upside to Obamacare!)

With numbers like that you can feel more confident than ever about taking advantage of every legal technique to trim your tax bill. And the Rich Dad 2020 Tax Guide is loaded with 91 of them that could put thousands of dollars back in your pocket.

Robert Kiyosaki’s team of tax experts have fully revised and updated this year’s guide so you can keep more of what’s yours. Access here — no long video to watch.

To the mailbag, and more reaction to our instant context of Soleimani getting smoked.

We heard from a reader with a paragraphs-long litany acknowledging Washington’s follies in the Middle East, especially Iraq post-2003, which then pivoted to the following conclusion.

“But it's not as simple as just saying that we now abandon the region and pick up our toys and soldiers, tuck tail and head out to the States. Iran is now a major player there with aid and sustenance from the Russians and Chinese and capable of wreaking substantial havoc and disruption that would affect not only countries in the ME (and not just Israel) but also Europe and the USA. To contend otherwise is simply folly.”

The 2008 crisis brought on in part by the Federal Reserve’s reckless easy-money policies? We were told it could be resolved only with unprecedented new easy-money policies in the form of near-zero interest rates and “quantitative easing.”

So now Iran turns out to be the biggest winner of the Iraq War — that’s actually the U.S. Army’s assessment in a massive historical study released a year ago — and the only solution can be implemented by the same sorts of officials responsible for the original screw-up?

Or as that brilliant strategist Hillary Clinton once said, “We are in just so many deep holes that everybody had better grab a shovel and start digging out."

“I liked the way you appeased the jittery retired naval officer. I agree with your sentiments on the topic 100%,” a reader writes after yesterday’s 5.

“Also liked your response to the ‘self-described longtime subscriber’ who responded to your observations about Soleimani and the archduke. It seems one can’t even opine on current events without overreactions by a throng of self-appointed experts ‘correcting’ you!”

The 5: Meh, comes with the territory…

P.S. In other tax news, the IRS announced yesterday that filing season will begin in less than three weeks — Monday, Jan. 27. That’s the first day your return will be accepted for processing.

The guide is available for immediate download. Learn how to get yours at this link.