Fresh from the Consumer Electronics Show (CES) 2020 in Las Vegas, Samsung’s rolled out a Star Wars-worthy bot the company hypes as your next “life companion.”

Apparently, your flesh-and-blood spouse — or even man’s best friend — doesn’t fit the bill anymore. Nope. There’s a “Ballie”-shaped hole in your heart you didn’t even know about…

Yes, the folks at Samsung really swung for the fences when naming their artificial intelligence-cum-life coach Ballie, right?

Back to CES 2020: Samsung CEO H.S. Kim put Ballie through its paces onstage Monday night and showed a short film that depicts a day in the life…

Basically, Ballie performs a series of household tasks — the only thing the film doesn’t show is Ballie becoming self-aware. (We kid.)

All kidding aside though, the minute-and-a-half film is called A Waltz for Ballie and samples Johann Strauss II’s “The Blue Danube,” also featured in 2001: A Space Odyssey. Who’s self-aware now? And who’s dancing for whom?

But if you’re thinking the tennis ball lookalike is just an athletic version of your Roomba, no dice. Ballie doesn’t get its hands dirty… or something like that. Instead, Ballie bosses your Roomba around — along with any other (IoT) internet of things-capable device in your domicile.

Which brings us to our point today: What do Ballie and IoT have in common? Why, the internet, of course; next-level technology requires lightning-speed internet.

Zach says: “That’s where I learned that 5G isn’t just a little bit better than the current state of technology. It is exponentially, disruptively better.”

So much better, in fact, 5G’s expected to leave the growth that came from fourth-generation internet in the dust. Consider: While 4G added about $100 billion to the U.S. economy, according to Orange Business Services, 5G might add as much as $1 trillion.

And Zach’s convinced 2020 is the year “5G will power billions of new connections… opening up countless new revenue streams for companies.”

As proof, Zach and his team have curated some 5G statistics he hasn’t been able to find anywhere else, including a map delineating where 5G’s already operating in the U.S., a breakdown of 5G’s market growth and — as far as Zach can tell — the world’s first 5G stock index.

“So which places have 5G now… which places will have it next… and when will the majority of Americans be able to access these next-generation networks?” asks Zach.

The big telecoms have been promoting 5G networks for several years but they’ve just recently made good on their 5G promises in some major U.S. markets… 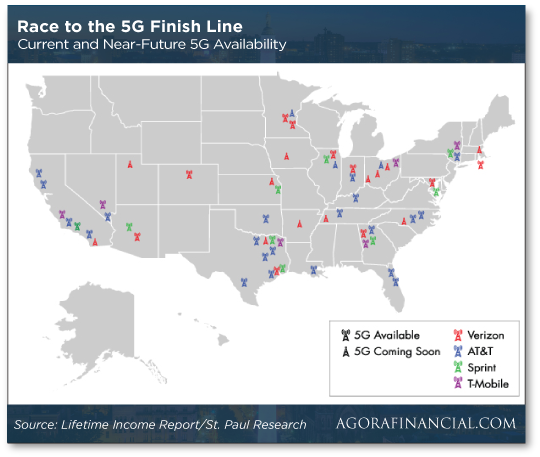 “With a single glance, you can see which telecommunications companies are leading the 5G race… and how hard they’re working to maintain their advantage,” says Zach.

“The map also shows how much work is left to do,” Zach says. “I think the most important spots on the map are where 5G is ‘coming soon.’ The major telecommunications companies are moving people and equipment into these regions to build the immense infrastructure a 5G network requires.

“And we can predict some of the follow-up effects it will have in the area.” Take for example regional construction firms, local telecoms that should profit from 5G’s expansion and local retailers selling 5G-equipped devices.

“Then we follow the money outward to see which national, even global, companies stand to gain the most as 5G goes online in new places,” Zach continues.

“We created a first-of-its-kind tool for tracking the entire 5G market,” he says. “My team’s research led to a total of 74 stocks that are closely linked to the 5G rollout.”

Here’s a breakdown of the business sectors involved… 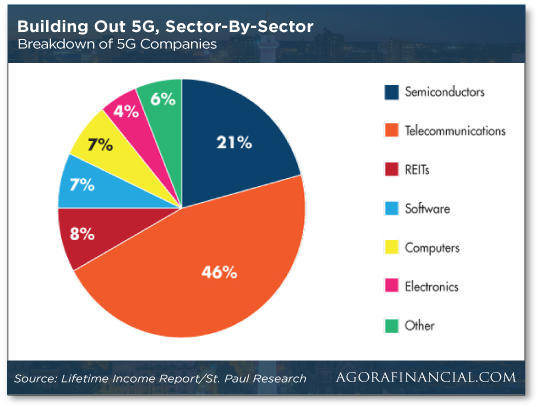 “The list… contains companies of all shapes and sizes — from tiny businesses barely out of the startup stage to global industry giants.”

Taking it a step further, Zach and his team were able to use industry data for a one-of-a-kind analytic: “In the end, we created what we believe is the world’s first 5G stock index.”

Of course, a stock index is a tool analysts use to chart groups of stocks — you have the big indexes like the DJIA, the S&P 500 and the Nasdaq.

“Our index does the same thing for 5G companies,” says Zach, “helping us gauge how they’re doing against the general market… and giving us a baseline for predicting future moves in the industry.” (FYI: Zach’s 5G index is equal-weighted… meaning a $200 billion company’s performance affects the index’s performance the same way that an $80 million company’s does.)

“As it turns out, 5G stocks have completely blown past the general stock market,” Zach says. 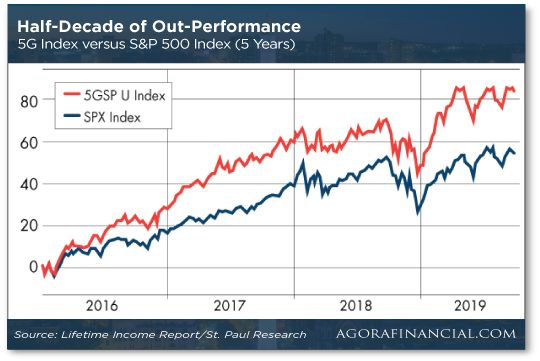 Looking at the chart, there’s no better tool to calculate the momentum of 5G-related companies. “In all,” says Zach, “our 5G index has delivered 83% gains since late 2014 — a lot closer to doubling your money than regular stocks!” (Emphasis added.)

Zach — who’s in attendance at CES 2020 at the time of writing — expects expansive 5G profits this year, in keeping with 5G’s expansion.

“To track those profits, we can use the 5G Index,” he says. “It lists all the stocks involved in the 5G industry. We can use this information to gauge how 5G companies are doing compared with the general market. It also gives us a baseline for predicting future moves in the industry.”

Zach’s 2020 prediction? “I expect the stocks in our 5G index to surpass just about every major index by the time we start looking ahead to 2021.”

Stay tuned to The 5 for how you can get full access to Zach’s up-to-the-minute 5G analysis — and take full advantage of his 2020 prediction — in the weeks to come.

Alan Knuckman — our resident eyes and ears at the CBOE — is keeping cool and collected following the ramp-up of Iran-U.S. tensions.

By way of explanation, he turns to the Volatility Index (VIX) that tracks investor sentiment… 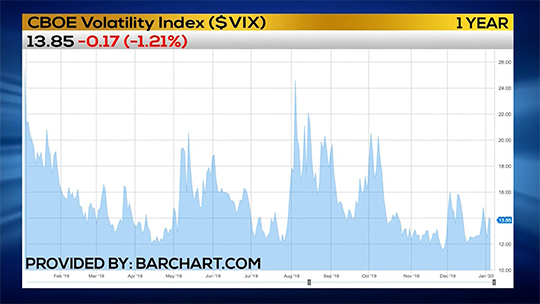 Alan concedes: “Yes, there’s anxiety… but the VIX only shot up to 16 and then it’s back down to the 14 level. So it’s giving up those gains,” he says, “which signals the markets are a lot more stable than you and I may feel.”

Alan’s takeaway: “I always say it’s about price, not politics.” And he believes any downward market action represents “just a minor pullback.”

Apropos of politics, President Trump held forth at a press conference this morning. He said Iran “appears to be standing down” following retaliatory missile attacks on two military bases in Iraq yesterday.

The presser in a nutshell? 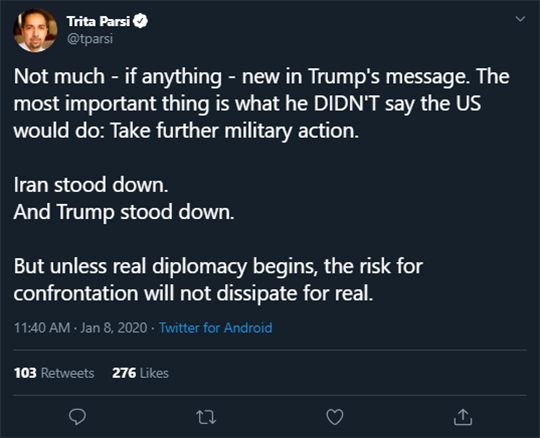 Commodities — on the other hand — are not holding onto gains: Oil continues to slide. A barrel of West Texas crude is now below $60 per barrel on news of no imminent shutdown at the Straits of Hormuz. 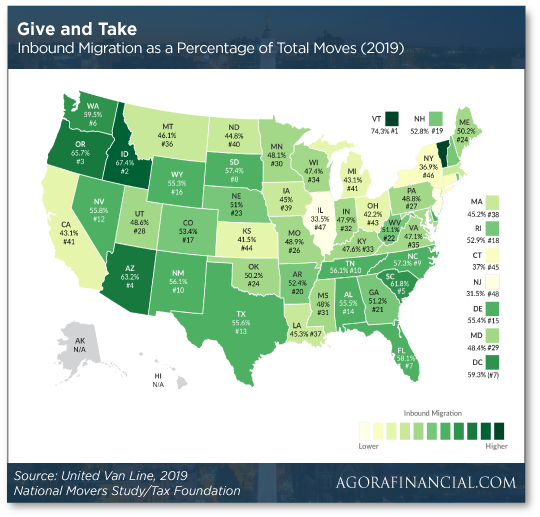 “The 2019 National Movers Study shows Vermont, Idaho, Oregon, Arizona and South Carolina as the states with the highest proportion of inbound moves,” the Tax Foundation notes.

The biggest losers, then? One state comes as a surprise while the others — high cost of living, high-tax states — not so much. Ticking them off: New Jersey, Illinois, New York, Connecticut and — the outlier — Kansas.

States that were nearly balanced in terms of outward and inbound traffic include Oklahoma, Maine and Nebraska.

The Tax Foundation concludes: “While certain factors are outside a state’s control (sunny Florida may always have a certain competitive advantage in attracting retirees, for example), every state can foster an attractive economic landscape through wise tax policy decisions.”

Jibing with the Tax Foundation map, a Jersey CPA answers a question once and for all: “Do you really know how the so-called N.J. exit tax works?”

First, is an “exit tax” even a thing? Not exactly, parses CPA Ken Bagner of firm Sobel & Co.

“Despite the confusion caused by calling it an exit tax,” he says, “the law simply requires the [N.J. home] seller to pay state tax in advance, calculated as follows: New Jersey withholds either 8.97% of the profit or 2% of the selling price, whichever is higher.”

Hmm… Not sure I would use the adverb “simply” when referring to New Jersey’s tax code. Eggheads, amiright? (But… The 5’s got nothin’ but love for you.)

“The seller must pay this tax prior to leaving the state,” Mr. Bagner emphasizes, “even if there is no gain from the sale. But the state takes all that into account once the year-end income tax is filed.” So *pfft* it all comes out in the wash, our number cruncher says.

We clear now? No, New Jersey’s not holding you hostage until you pay up… except they kinda are?

To the mailbag: “Here’s one that is worthy of a Dan Brown conspiracy plot,” a reader says…

“What if the president did not order the strike on Soleimani? What if some rogue American general in collaboration with a rogue Israeli general took it upon themselves to disrupt Trump’s exit strategy from Iraq?

“Of course, the president would have no choice but to state that he ordered the attack. Otherwise, it would look like he has lost control over his military.

“Did you notice that when the president made the first announcement, he was not his flamboyant self? Almost like he was reading from a script. Given his stated goal of pulling out of Iraq, it doesn’t make any sense that he would ‘poke the bear’ now.

“There are a lot of players in the game who benefit from Soleimani’s death but they may not be the ones we’ve been led to believe.”

“Just FYI,” another reader says, “Did not receive the newsletter Tuesday, Jan. 7, after approximately 10 days of no problems.”

Our email team is working around the clock to iron out some deliverability issues; we appreciate your patience in the meantime. Also, don’t miss an issue of The 5 by visiting our website.

P.S. This will be scrubbed from the internet tomorrow…

But this 90-second demonstration could change the trajectory of your finances, your family and your life.

Be one of the smart investors to watch this video now because — by the time the market opens at 9:30 a.m. tomorrow — you’ll be left out in the cold.