Just for the heck of it, we follow up on something a reader said Friday at The 5 when she noticed an unusual market quirk…

“You all at The 5 probably saw this years ago, but I’m a little slow sometimes. I just noticed an eerie familiarity in the acronym for Microsoft, Amazon, Google and Apple when reading yesterday’s missive.

The acronym? M-A-G-A… and we’re not too proud to admit we didn’t catch onto what our eagle-eyed reader spotted.

The “MAGA” stocks she referenced have been some of the best performers since Trump took office on Jan. 20, 2017… 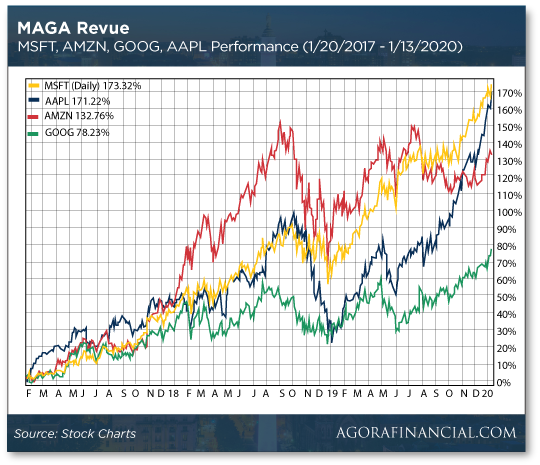 Compared with the broader S&P 500 — up approximately 50% over the same time period — these four stocks have made a killing.

But as Dave pointed out Friday, any benefit for Microsoft, Amazon, Google and Apple from the MAGA movement is purely coincidental since Trump’s been ambivalent about at least two of these four tech giants.

Trump’s gone as far as slapping the “monopoly” label on Amazon and Google, and our macroeconomics authority Jim Rickards, for one, believes antitrust will be a hot-button issue in 2020.

“Some of the largest companies in the world, including Google, Facebook and Amazon, are about to discover the impact that antitrust law can have,” Jim says, “especially when it comes to breakups of these mega-corporations.”

Looking back to the beginning of antitrust regulation in the U.S., Jim points to the following landmark legislation:

“The assumption was simply that a large monopolistic position would be abused to the detriment of customers in order to maintain the monopoly,” Jim says.

The classic example being Standard Oil… that predated The Godfather, sure, but not its practices; particularly, that whole “make him an offer he can’t refuse” thing as the oil conglomerate regularly ate smaller companies for breakfast.

The upshot? “By 1904, Standard Oil controlled over 90% of the total oil production of the United States,” Jim notes. So in 1911, the Supreme Court broke the company into 34 different companies in its decision Standard Oil Co. of New Jersey v. United States.

By the 1970s, however, “numerous legal and economic flaws in this simplistic ‘big is bad’ approach” came into focus, Jim says… even as antitrust law sort of lost its way.

“The first flaw was the idea that large scale automatically results in higher costs to consumers because it freezes out competitors,” Jim says. 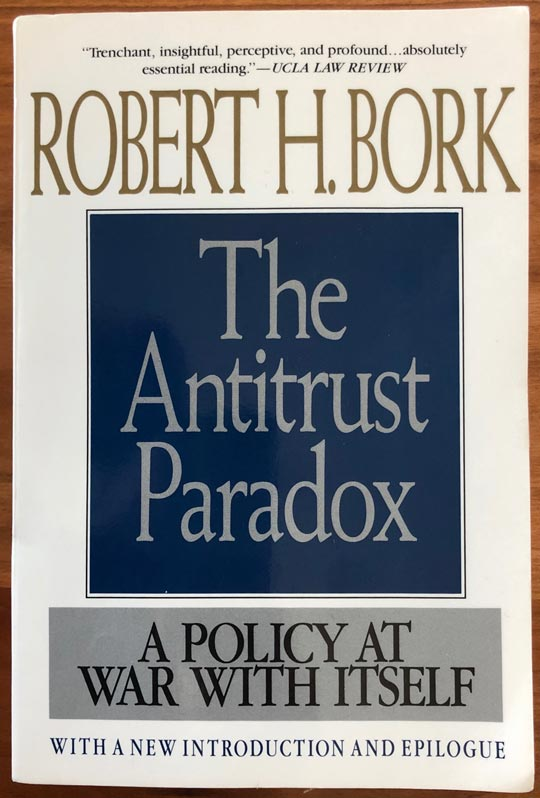 “‘Competition’ could not be the goal of antitrust law if the result was worse service and higher prices for consumers.”

To Rickards’ way of thinking, there’s been an evolution in the antitrust through line…

“Big is bad if the consumer is abused in unseen ways,” he says. “This new synthesis puts Facebook, Google and Amazon squarely in the sights of antitrust enforcement.

“Understanding this synthesis is critical because the consumer will be judged to be better off if we only consider convenience and cost,” says Jim. I mean, what’s easier than Amazon’s “one click” shopping?

“Under the classic Bork analysis, the cost of these services is so low (free) and the convenience so great (you’re connected to the world) that the size of the companies should be ignored. The consumer wins.”

“There’s a dark side that’s getting more attention by the day,” Jim says. “The tech giants are using personal information freely provided by users to develop in-depth profiles of each user.

“These profiles are then grouped by shared interests and habits and data-mined using artificial intelligence” with the information “sold to advertisers and app developers who target the audience with customized pitches.” Not to mention the gamification of Big Tech that keeps you coming back for more.

“It gets worse,” Jim says. “The profiles are sold to foreign governments, which combine them with digital facial recognition and other surveillance tools to arrest political dissidents and squash political dissent.” Or hackers — government-sponsored or otherwise — handily swipe your most personal information…

So the next wave of antitrust legislation, according to Jim?

“When the hidden social costs of this addictive software, over-the-top marketing, government surveillance and totalitarian behavior are included, the products of the tech giants are anything but free.”

He concludes: “The result may be as traumatic for today’s giants as it was for Standard Oil… during earlier eras of antitrust activism.”

[Editor’s note: In the next 24 hours, Jim Rickards is finally going public with all the details of a brand-new project that’s based on rock-solid statistical analysis.

Not that you need to be a math whiz or even an ace investor to profit from GIANT stock crashes.

It couldn’t be easier: All you need to do is place one simple trade… and you could walk away with a 24-hour fortune.

For more on this time-sensitive offer, click right here.]

No major economic numbers to report today… but earnings season gets underway tomorrow when JPM is the first of the Dow 30 stocks to report.

Taking a peek at crypto, bitcoin’s in the red at the time of writing… but still holding above $8,000.

Since we’ve featured a panoply of 2020 predictions from Agora contributors, we’d be remiss to exclude James Altucher’s bitcoin prediction. First, our iconoclast investor looks at how events in Iran have impacted bitcoin.

James reports: “Just hours after the attack [that killed Gen. Soleimani], there was enough demand for bitcoin that its price (showing there was great demand from Iran’s middle and upper classes) went over $29,000 [in Iranian currency].

“Of course,” he says, “Iran is a relatively small market. So we need to see what will happen with the regular price of bitcoin once the dust settles.”

That is if the dust settles — and James isn’t just talking about the Middle East. “We live in an uncertain world,” he says. To wit, James emphasizes potential seismic activity for the crypto market from Brexit, Argentina, Turkey, trade wars…

“But uncertainty ― and the guarantee that it will continue ― will drive up the price of bitcoin,” James says.

And while he’s retreating from “bitcoin $1 million” hyperbole, he expects bitcoin to break through recent resistance “one dollar at a time.”

“This year,” he continues, “I think we’ll see a lot more money head into bitcoin… For now, I’m keeping an eye on the various bitcoin exchanges and how they are reacting to this uncertainty,” James says.

Here’s another straw in the de-dollarization wind: “The State Department warned that the U.S. could shut down Iraq’s access to the country’s central bank account held at the Federal Reserve Bank of New York,” The Wall Street Journal reports.

“Iraq, like other countries, maintains government accounts at the New York Fed as an important part of managing the country’s finances, including revenue from oil sales,” the article explains. At last count in 2018 — according to the Central Bank of Iraq — the Fed held about $3 billion in overnight deposits.

And the U.S. government turning off the valve to Iraq’s funds isn’t without precedent. “[Iraq’s] financial system was squeezed in 2015 when the U.S. suspended access for several weeks to the central bank’s account at the New York Fed over concerns the cash was filtering through a loosely regulated market into Iranian banks and to the Islamic State extremist group.”

The result? The dinar was devalued and there was a “dash for dollars” as Iraqis, companies and banks scrambled for hard cash.

The specter of bank sanctions against Iraq comes after a parliamentary vote Sunday, urging “Prime Minister Adel Abdul-Mahdi to work toward the expulsion of the approximately 5,300 U.S. troops,” says WSJ. After which, Trump along with Secretary of State Mike Pompeo said: “Not gonna happen.”

One Iraqi official takes a measured tone when it comes to U.S. troops leaving Iraq, saying: “Whenever you have any amicable divorce, you still have the worry about the children, pets, furniture and plants, some of which are sentimental.” Well, yes… and you can’t forget the bank accounts!

Less measured, an adviser to the prime minister, Abd al-Hassanein al-Hanein, says if the U.S. shuts down access to Iraq’s accounts, “[the U.S.] will lose Iraq forever.”

Here’s our point — buried deep in the WSJ article — we find this: “Pro-Iranian and other Shiite factions leading the charge to oust U.S. forces from Iraq have sought to reassure the public by telling them Iraq could pivot to China.” (Emphasis added.)

Just another step away from the U.S. dollar’s hegemony? Stay tuned…

“In Silicon Valley, it’s commonly believed that if you’re over the age of 35, you’re seen as over the hill,” says San Francisco-based plastic surgeon Larry Fan.

“Middle-aged guys will notice that everyone around them looks fresh-faced and youthful, and they’ll tell me they feel like they stick out, and not in a good way,” he says.

So Dr. Fan’s seeing an uptick in male patients going under the knife for facelifts and less invasive procedures like Botox.

Of course, ageism is real… 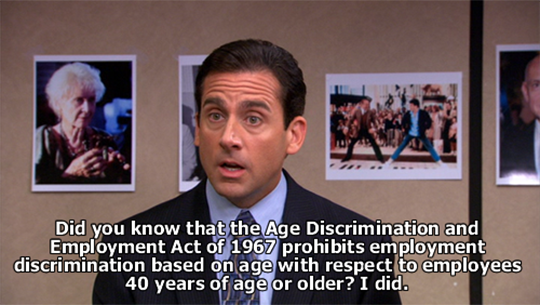 A lesson Google learned the hard way last year when it shelled out $11 million to 230 job applicants over age 40 when the company was accused of “systemic” age discrimination when hiring.

“The older workers alleged that the company used phrases like ‘Googleyness’ and ‘cultural fit’ as euphemisms for youth,” says a Washington Post article. Ugh.

But while men in LA might request Ben Affleck’s jawline or Brad Pitt’s megawatt smile, the Silicon Valley set seeks to emulate Elon Musk’s “fresh-faced vigor” or Jeff Bezos “looking buff in a fitted shirt in [his] mid-50s,” the article says.

At any rate, more men are feeling the pressure to live up to an impossible standard of beauty… historically imposed on women? About damn time.

P.S. Watch this eye-opening video in the next 24 hours.

It contains information that could impact millions of Americans…

Even though Wall Street will do whatever it can to write it off as “fake news.”

If you hold any stocks, bonds, ETFs, or cryptos — or not — we urge you to watch this video now.