Six Weeks to the Next U.S.-Iran Showdown (Here’s How We Know)

“The mainstream media… politicians… economists… they all want to convince you the conflict with Iran is over and oil prices are headed back lower,” says Alan Knuckman, our eyes and ears in the Chicago trading pits.

“But they’re lying to you. The markets are telling a different story.”

That story doesn’t show up in a chart of the oil price. You can see how a barrel of West Texas Intermediate topped $63 shortly after New Year’s Day, when it looked as if the United States and Iran were on the brink of all-out war.

Just over a week later, the price is barely above $58 — where it was in early December. 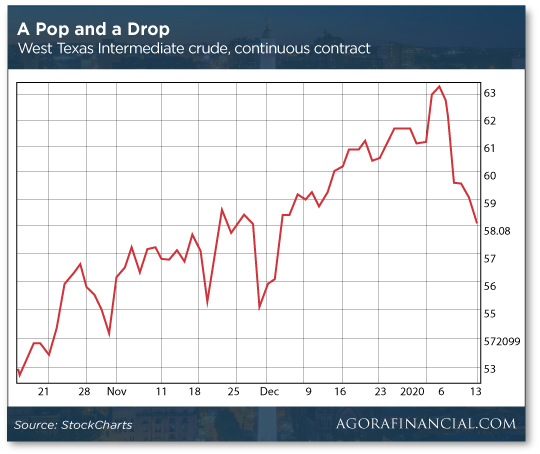 But if Alan’s right, that drop won’t have any staying power. Another shock and spike are coming… and within the next six weeks.

We pay heed to Alan’s call this morning because of a spooky-accurate call he made late last year.

On Nov. 1, we spotlighted Alan when he said straight up, “Mark my words: The trade war is over.”

With the help of a sophisticated market-tracking tool, Alan noticed some intriguing activity in the options markets: Someone, or a group of someones, was scooping up call options on EEM, the big emerging-markets ETF. Chinese companies make up nearly one-third of EEM’s holdings and five of the top 10 holdings are Chinese firms.

It was evident to Alan that these buyers were somehow in the loop that a phase one trade deal between Washington and Beijing was at hand. Sure enough, word of the deal leaked on Dec. 12. (And the signing ceremony is planned for tomorrow.)

As best we can tell, the insiders who made that bet collected $2.4 million in pure profit. Had you followed our cue on Nov. 1, you’d have hauled in a 19% gain in only six weeks. (Of course, we save Alan’s most lucrative trades for his paying subscribers.)

“What you see on the news is often not the full picture of what’s going on,” explains Alan.

So while the media tell us the tit-for-tat escalation is over… the activity Alan has detected tells another story entirely.

“My indicator has picked up on unusual options activity — someone with information is making huge buys in key oil stocks.”

“With all three options trades expiring in just a month, and now that oil is down again, this investor would be sitting on a massive loss,” Alan says.

But traders don’t make bets of this magnitude unless they’re certain they’ll pay off. Otherwise, they lose it all when the call options expire.

Alan’s conclusion: “Oil will go back up… the smart money pretty much just guaranteed it. Not only that, but it’s going to increase before Feb. 21.

“And when oil prices spike, our mystery investor will get to cash out for a massive profit. So now that the energy market has lost some steam and oil stocks are still cheap… consider picking up some oil options of your own and follow the smart money all the way to your payday!”

But for best results using Alan’s indicator, you’ll want to follow his step-by-step trade instructions for paying subscribers. For 2020, he’s rolled out an all-new strategy using this powerful tool — daily trade recommendations, every one of them with the potential to double your money inside a month.

That means you can get started tomorrow morning. Alan walks you through his strategy when you click here.

To the markets, which are treading water on this first day of earnings season.

Yesterday, the S&P 500 and the Nasdaq notched record closes, helped by news late in the day that the Treasury Department would drop the “currency manipulator” designation it gave China last August — an unexpected add-on to the trade deal set to be signed tomorrow.

But as we write today, both of those indexes are retreating a bit… while the Dow is marching ahead, back within 40 points of 29,000. Meanwhile, gold’s slide of late continues, the bid now at $1,541 — where the Midas metal traded on Jan. 2.

➤ As has been tradition in recent years, JPMorgan Chase is the first of the Dow 30 stocks to report earnings. JPM crushed analyst estimates; at last check shares are up 2%, and that’s giving a lift to most bank stocks. Well, not Wells Fargo — which delivered a big fat “miss” and is down 4% at last check

➤ The major economic number of the day is the consumer price index — up 0.2% in December. Year over year, the official inflation rate works out to 2.3%. As always, any resemblance to your own cost of living is purely coincidental; the real-world inflation rate from Shadow Government Statistics is a hair over 10%, the highest in more than a year.

If Wall Street is yawning at impeachment, so is Main Street. Or so we’d judge from the National Federation of Independent Business’ latest Optimism Index.

The December number checks in this morning at 102.7 — on par with where it’s been over the last year.

It was a similar story with the Clinton impeachment 21 years ago. “The index showed little variation over the 1998–99 period that included the pre-impeachment news coverage, the impeachment proceedings and its aftermath,” says the NFIB. “The initial 2019 path is starting in a similar fashion, albeit at a stronger position.”

As has been the case for a while, good help is hard to find: Asked to identify their “single most important problem,” 23% of survey respondents cite “quality of labor.” The percentage was the same a year ago.

From an auto show in Singapore, behold the newest model of Subaru Forester. It’s a special edition with a special name. Note the lettering on the platform… 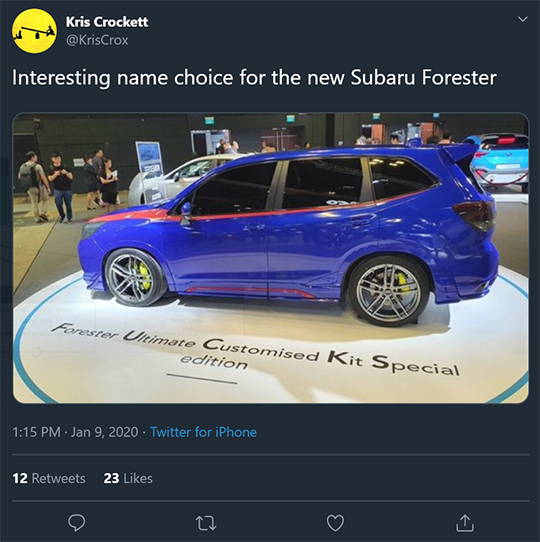 This iteration of the Forester features “striking blue body paint,” according to Top Gear Philippines, and red accent lines. It also sits lower to the ground than the typical Forester.

But the name, you wonder?

Via an anonymous tipster, the website The Drive obtained a letter sent from Subaru of America to its dealers, fobbing off blame on the company’s independent Singapore distributor.

“We want to make sure that you and all of your customers know that Subaru of America Inc. (SOA) and Subaru Corp. (SBR) had nothing to do with this… It goes without saying that this car will not be available in the United States market.”

Which leaves us to wonder: A slip-up? Something lost in translation? Unlikely. As The Drive reminds us, “English is one of four common languages spoken in Singapore, and in fact is the most widely spoken in schools and international businesses. It seems pretty likely that independent distributor knew exactly what it was doing: building a legend.”

“You used the word nonplussed to mean even-keeled/unfazed. It means exactly the opposite,” a reader chides.

Nor is he alone: “If you insist on using words like ‘nonplussed,’ you should get the meaning correct; it’s been misused so much that now some dictionaries include an informal North American meaning that includes the opposite.

“I’ve also seen the word ‘peruse’ in the same fashion — I have no idea if they mean ‘read carefully,’ which is the proper meaning, or to just ‘scan briefly.’

“So now we have words in America today that can mean anything, which means they mean nothing. It’s frustrating. The true meaning of ‘liberal’?

“Enjoy The 5 very much — just having a little fun, although all true. Please pardon the incorrect punctuation, sentence structure, etc.”

The 5: Yes, right or wrong, it is the “North American informal” usage we intended.

Interestingly, that usage does not show up in either the 1977 Doubleday Roget’s Thesaurus or the 1985 American Heritage Dictionary that have been your editor’s go-to references for more than three decades. Obviously it’s a relatively recent thing, and it crept up on me unawares!

For better or worse, language is an evolving thing. As the late James J. Kilpatrick wrote in his 1984 book The Writer’s Art, “In 1973 Harper & Row produced the first Barnhart Dictionary of New English. It contained 5,000 new words (or new usages of old words) that were not then contained in standard dictionaries.

“The editors had planned to wait 10 years before a second edition. The language couldn’t wait. In 1980, three years ahead of schedule, out came the second Barnhart — and it contained another 5,000 words or usages that had arrived in the meanwhile.”

“Has anyone there read Peter Zeihan’s books The Accidental Superpower and The Absent Superpower?” a reader inquires.

“Much danger — Pakistan/India rattle sabers at each other, India/China too. China needs energy, Saudi and Iran have it — will tankers make it there? Japan is sending their navy to escort their tankers now.

“USA has energy, food, tech and two oceans/moats for protection, 11 supercarriers for force projection and a cooperative nation with 50 states innovating and making money in our changing world.

“Yeah, we need lots of things to be better; we will change those things in the future — but [this] makes some of your assumptions maybe off a bit.

The 5: We’re vaguely familiar with Zeihan’s work, more so with the private intelligence outfit Stratfor — the “shadow CIA” where Zeihan used to work.

We readily acknowledge our assumptions might be “off a bit.” Surely there were many Romans in the first century, during the time of Caligula, Claudius and Nero, who thought to themselves, This can’t possibly last. But go figure, the empire held together for another 400 years.

Even if you mark the start of Roman decline from a much later date — say, roughly 250 CE, when the silver content of the denarius sank to less than 1% — the empire still hung in there, kinda sorta, for two more centuries.

So as much as we’re plugged in to Sir John Glubb’s 250-year life span of empires, to say nothing of the 200-year “Tytler cycle”… 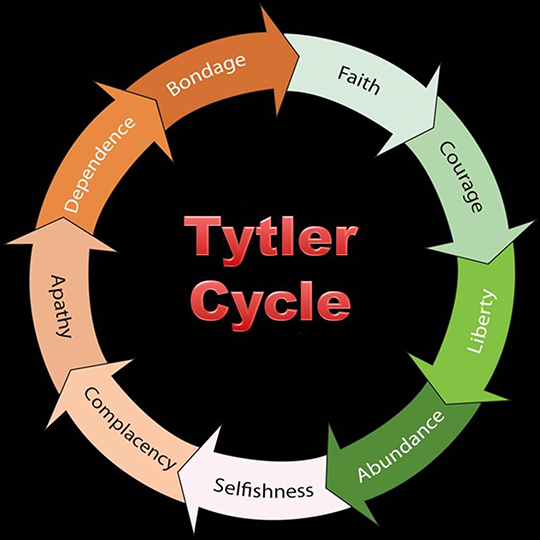 One of many depictions of the Tytler cycle you can find on the web; for the record, there is no evidence the concept originated with Alexander Fraser Tytler.

… we readily concede Pax Americana, and the dollar’s reserve-currency status that underpins it, might have more staying power than we think.

P.S. What if you got a text tomorrow morning, right before the market opened, with simple instructions that could double your money over the following 30 days?

And what if you got a similar text, laying out a similar opportunity, every day the market trades?

We’re still offering a charter-member discount… but not much longer. Click here and check it out for yourself right away.