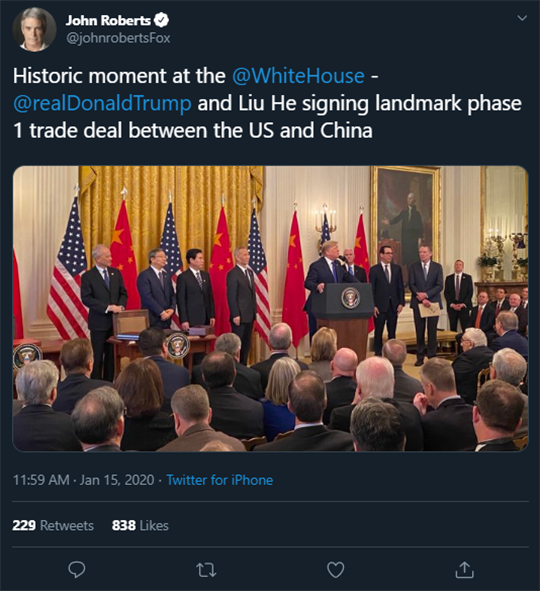 At the risk of repeating ourselves, we saw this coming weeks before the announcement of a tentative deal in mid-December.

Along the way we’ve also bent over backward to point out this agreement is only a truce in a lengthy conflict between Washington and Beijing — one that could last another three decades and become nothing less than a new Cold War.

If Bloomberg News’ reporting is to be believed — and we realize that’s a questionable proposition at present — many of the tariffs imposed by Washington these last two years will remain in place throughout 2020, “and any move to reduce them will hinge on Beijing’s compliance with the terms” of the deal signed today. This provision “isn’t expected to be specified in the deal’s text,” we’re told.

Citing “people familiar with the matter,” Bloomberg reports “the two sides have an understanding that no sooner than 10 months after the signing of the agreement… the U.S. will review progress and potentially consider additional cuts on tariffs affecting $360 billion of imports from China.”

What happens in 10 months? Oh, yeah, the election will be over.

Well played by Team Trump, if true. Between now and then, depending on the day and the circumstances, the incumbent president can crow about the tremendous deal he got done… or hammer the Chinese for dealing in bad faith.

Then again, Democrats who spent years pushing closer ties between Washington and Beijing are now trying to outflank Trump as China hawks — as we took note after one of the Democrats’ debates last month.

But for a real glimpse at where events are moving long term, we take you to a former Air Force base seven miles south of downtown Topeka, Kansas.

Yesterday, Kansas state legislators were summoned to this location for a briefing by the U.S. Department of Homeland Security. They were not told in advance what the topic would be; several worried they would be told of an emergency.

“Lawmakers were required to ride to the site in unmarked and whitewashed National Guard buses, with lawmakers assigned to specific buses,” reports the Associated Press. “Staffers and reporters were not allowed to go.”

As the AP tells it, the gist of the briefing was that “foreign governments are trying to get proprietary information about Kansas business and agricultural assets” — using tools as prosaic as emails with skeevy attachments.

According to the lawmakers who were there, the DHS briefer could not identify any specific businesses or assets that were under threat… or where the threats might come from. Rep. Jim Gartner (D-Topeka) summed up the briefing like so: “We need to be careful in responding to people because everyone’s looking for an in, some way, somehow.”

But the unspoken subtext was unmistakable: It’s all about China.

Some essential background within the AP’s story: “The briefing Tuesday came less than five months after a federal indictment charged a University of Kansas associate professor of secretly working for a Chinese university while doing research in Kansas on projects funded by the U.S. government. The professor contends that a visiting scholar fabricated the allegations and is trying to get the criminal charges dismissed.”

Also, “the Kansas State University campus in northeast Kansas is home to a new $1.25 billion national biosecurity lab that is expected to start operations by 2023.”

The Kansas “briefing” — if it’s even worthy of that name — looks like the latest step in a concerted effort to foment fear and loathing of all things Chinese.

There was the feds’ harassment of ethnic Chinese cancer researchers, including U.S. citizens — reading their emails, stopping them at the airport, visiting their homes to ask about their loyalty. Several top researchers have been forced out of the prestigious MD Anderson Cancer Center in Houston.

Then there was the three-part series done by Washington, D.C.’s all-news radio station WTOP about foreign spies in the capital, especially Chinese spies.

Said Brian Dugan of the FBI’s Washington field office, directly addressing the federal employees and contractors who make up WTOP’s core audience: “A spy is going to be someone that’s going to be a student in school, a visiting professor, your neighbor. It could be a colleague or someone that shares the soccer field with you.”

So we’re talking about real reds-under-the-bed stuff. And it’s not going away anytime soon.

In 2018, Stanford University’s Hoover Institution put out a report with the Asia Society titled Chinese Influence & American Interests: Promoting Constructive Vigilance. It named names of Chinese-American businesspeople and scholars suspected of being fellow travelers with the Chinese Communist Party.

One of them was a Silicon Valley entrepreneur named Wayne Lin. In 2000 he bought Wenxuecity.com and grew it into the most popular Chinese-language website in America.

The report cited the website as an instance of Beijing burrowing its way into the web and social media. “There is even an unsubstantiated rumor that the purchase of the website was subsidized by $1 million from the [Chinese Communist Party] Propaganda Department,” said the report.

Pimping an “unsubstantiated rumor” like that lends a clue to the level of rigor that went into the report’s research. The claim was deleted from a revised edition, but the damage was done. Some of the website’s readers sent Lin hate mail and others stopped posting.

“The Next Internment: Would Chinese in the U.S. Be Rounded up During a War?” was the title of a 2017 article in Foreign Policy.

Author Giacomo Bagarella invokes the memory of the camps set up for ethnic Japanese, including U.S. citizens, during World War II.

It’s an outlier possibility, he allows, but “in the shadow of great-power war, the equilibrium between restraint and reprisal leans heavily toward the latter… [T]he ethnic Chinese population in the U.S. faces significant uncertainty and travails in the looming duel between Washington and Beijing.”

Even if events never reach that stage, the seeds of suspicion are being planted as we speak. It’s hard to believe Kansas is the only place lawmakers got the kind of Homeland Security briefing they got yesterday.

We’re confident in forecasting that sort of suspicion will have a bigger long-term impact on markets and the economy than any “phase one” deal signed today. We’ll continue to follow the breadcrumbs…

In the meantime, as the deal is being signed, the major U.S. stock indexes are all in the green.

Gold is little moved at $1,550. Crude continues its slide of late, a barrel of West Texas Intermediate now $57.67. (If you were with us yesterday, you know that won’t last.)

“The promise of personalized medicine is the potential to eventually fully customize therapies to fit the individual patient,” says Ray. “2017 proved to be a historic year on that score.

“That year, the FDA approved the first two cell-based CAR-T cancer therapies after they showed tremendous success as a last line in very sick patients.

“CAR-T could be considered the ultimate in personalized medicine… it uses the patient’s own cells to treat cancer. In CAR-T therapy, a patient’s blood is drawn and white blood cells are isolated. These cells are then genetically modified to attack cancer, multiplied in culture and then reinfused back into the patient” — where they attack the cancerous cells.

If that sounds expensive, you’re right. “Each patient has to have a batch made just for him or her.” We’re talking well into six figures for a single dose.

But Ray’s been following the work of scientists looking to change that — and slash costs by two-thirds. “A company that can streamline the production of these lifesaving therapies while slashing costs is in a great position to grow and generate outsized profits for investors.”

Ray just recommended a name in his Breakthrough Technology Alert — where he’s also on the case of something he’s calling “the biggest IPO ever.”

The year 2019 was only so-so for the biotech sector as a whole (it lagged the S&P 500)… but there’s still plenty of money sloshing around, if the annual J.P. Morgan Healthcare Conference is any indication.

The event is held every year in San Francisco. Last year we noted how at one of the “JPM Week” hotels, the Parc 55, companies that wanted to host an event could serve coffee for the princely sum of $170 a gallon — or $21.25 for a 16-ounce cup.

This year the San Francisco Chronicle tells us that at the Laurel Court Restaurant & Bar, there’s a $50 per person minimum for breakfast. Plus an 18% service charge. Plus — get this — an extra $30 an hour if you stay longer than 90 minutes. (Get that breakfast meeting done quickly, right? Nah, not when you can expense it…)

Meanwhile, if you want to host an event at the Sir Francis Drake Hotel, you can book meeting space in the lobby at the rate of $300 for three hours.

Yeah, the sector can’t be hurting too badly…

To the mailbag, and some housekeeping we’d rather not contend with: “What happened to my 5 Min. Forecast?” a reader inquires. “The last one I received was Jan. 6.”

“I really miss The 5,” says another reader in the lurch. “I hope you get the email issues resolved soon.”

The 5: Alas, the filtering issues we began experiencing last month are proving more thorny to resolve than we hoped.

We’ll spare you the tedious details; heck, we glaze over now and then when we read internal correspondence about it.

Suffice it to say we have skilled and hardworking specialists who are grinding away, night and day, to remedy things. In the meantime, should you end up being a victim of these unfortunate circumstances, you can always visit our voluminous archives. Each day’s issue is posted only a few minutes after it’s emailed — so check it out mid-to-late afternoon.

We thank you for your patience. As frustrating as it’s been on our end, it’s heartening to see the number of people who read us regularly… and who miss us when we’re not there.

P.S. “Three in a row! Very nice!” says a satisfied reader of one of our newer premium trading services.

Nor is that person alone. Follow the recommendations in this service and you could pocket up to $4,946 per week.

Curious? Check this out right away. Yes, there’s a video to watch but you’ll know within three minutes whether this is right for you.