Protests and riots will be “the new normal” in 2020, affecting almost 40% of the world’s countries.

So says a report from a British consulting firm called Verisk Maplecroft. Both CNBC and Bloomberg are giving the report “play” this morning.

By the researchers’ criteria, civil unrest hit 47 of the world’s 195 countries last year. That number is expected to swell this year to 75.

“The U.K. consultancy identified Hong Kong and Chile as the two flashpoints suffering the largest increases in unrest since the beginning of 2019,” says CNBC’s summary. 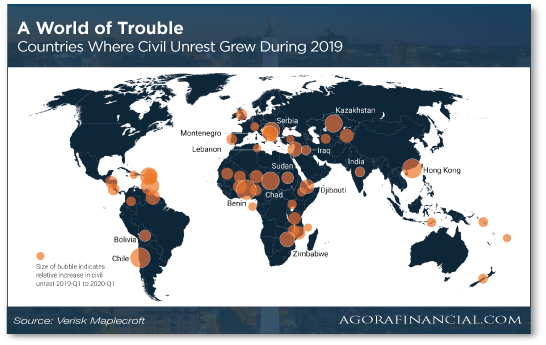 “Neither country is expected to find peace for at least two years, according to the research.”

No surprise to our Jim Rickards: “Investors should expect the trend toward social unrest, including in developed economies, to continue,” he wrote his Strategic Intelligence readers two months ago.

“Hong Kong is not just another emerging-market city,” he wrote. “It’s the third-largest financial center in the world, after New York and London. Growth there has turned negative. Capital and talent are fleeing as fast as possible. The situation promises to get worse.”

Meanwhile, “For decades, Chile was regarded as one of the most stable and prosperous economies in South America.” But in recent years, everyday Chileans have been beset by “stagnant incomes, rising housing prices, income inequality and a long list of lower- and middle-class grievances… The situation still has not stabilized.”

If you’re a casual news consumer, you might notice something here: Hong Kong got a lot of media coverage in the United States last year. Chile, nearly none.

That’s because Chile’s government is, by and large, friendly with the government in Washington, D.C. Meanwhile, China — which has governed Hong Kong since 1997 — is viewed in Washington as America’s chief rival for decades to come. (See yesterday’s 5.)

At worst, the phenomenon manifests itself in ways that patronize and belittle genuine human pain. Last fall we spotlighted riots in Lebanon that U.S. media told us were triggered by a new tax on WhatsApp usage. Look at those wacky third-worlders! In reality, the riots were the climax to decades of corruption and economic decline.

In any event, “We all need to buckle up for 2020,” says Miha Hribernik, one of the study’s co-authors. “The rage that caught many governments off-guard last year isn’t going anywhere and we’d all better adapt.”

The study says multinational mining and energy companies need to be especially cautious — protective of their projects and the capital tied up in them, but without overreacting. “Companies are at substantial danger of complicity if they employ state or private security forces that perpetrate violations.”

Still, the question lingers. Why? And why now?

Hong Kong, Chile, Lebanon, Iraq (which is getting tragically little U.S. coverage, but that’s a story for another day), the yellow vests in France… Is there a shared theme here?

Jim Rickards poses the question like so: “Allowing for the fact that there is always some instability somewhere, are we witnessing a trend that has a common thread (such as workers versus elites) and an element of contagion due to social media and internet-based news coverage?”

His answer: “The evidence suggests that may be the case. If globalization is the problem (because it overrides indigenous concerns and displaces jobs), then it follows that a global reaction is forming.”

OK, you ask: What about the United States?

The United States is noticeably absent from Verisk Maplecroft’s analysis, but “cities in the United States are not immune,” says Jim Rickards. That said, “local outbreaks of unrest are difficult to predict.”

Now and then we entertain the question of whether we’re on the cusp of a “new American civil war.” The most dire part of the scenario we shared at the beginning of 2019 didn’t pan out, and thank God for that. Precious few of us fear for our physical safety at the hands of our own neighbors.

That said, we’re watching Virginia, where yesterday the governor declared a state of emergency. 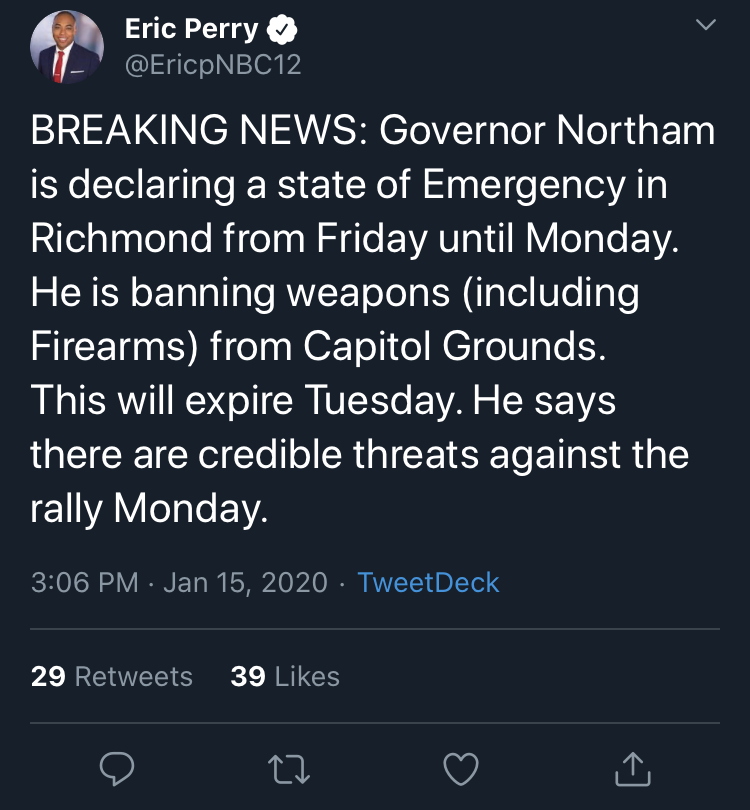 On Monday, gun rights supporters will converge on the capitol building to petition lawmakers against a package of gun-control measures proposed by the legislature’s new Democratic majority and supported by the governor. (The thread of “workers versus elites” Jim speaks of? Seems applicable here.)

The organizers of the event are adamant that they’re going to Richmond to lobby and not to protest. Still, they worry troublemakers of all stripes might hijack their agenda.

On the one hand, “the Democrats are afraid of the voters and want to portray this peaceful assembly of law-abiding gun owners in the worst possible way,” says a statement posted this morning on the website of the Virginia Citizens Defense League. “Has the Democrat leadership actually invited violent groups to attend for the purpose of disrupting our peaceful assembly?”

On the other hand, the statement also warns, “Lobby Day is NOT about statues, flags, racism, sexism or anything other than protecting the right to keep and bear arms for ALL law-abiding citizens.”

The 5 will be off-duty on Monday, as the markets are closed for Martin Luther King Jr. Day. But we’ll still be monitoring…

To the markets, where earnings and economic numbers are propelling the major stock indexes to record highs.

Meanwhile the “Philly Fed” survey shows factory activity in the mid-Atlantic growing at a healthy clip so far in January, affirming the Empire State survey yesterday.

That’s a more specific number than they gave us last year. In July, Bridgewater Associates founder Ray Dalio said only that “it would be both risk-reducing and return-enhancing to consider adding gold to one’s portfolio.” Still, the fact it was Ray Dalio saying it raised a few eyebrows. (We discussed it at length at the time; if you’d acted then, you’d already be up 8.6% in six months.)

Now Greg Jensen, Bridgewater’s co-chief investment officer, tells the Financial Times, “There will no longer be an attempt by any of the developed world’s major central banks to normalize interest rates. That’s a big deal.”

At the same time, he points to more and more political turbulence globally. (Uhh, see above.) “There is so much boiling conflict. People should be prepared for a much wider range of potentially more volatile sets of circumstances than we are mostly accustomed to.”

No, there’s no time frame attached to that $2,000 forecast. But we daresay waiting to add to your stash probably doesn’t make sense right now. The dip to $1,425 we were anticipating late last year? Never happened…

Go figure: Prosecutors are going easy on the patsy they fingered for the “flash crash” of May 6, 2010.

A weird day that was. The Dow plunged 1,000 points before springing back 650. Procter & Gamble briefly tumbled 37%. The accounting firm Accenture collapsed momentarily from $40 to $0.01. We remember the original explanation was that a trader at a major firm, perhaps Citi, mistyped a trade as “billions” rather than “millions.” No, that made no sense, not even then.

In 2015, the feds told us it was the fault of a 36-year-old man still living with his parents in suburban London but who was savvy enough to control tax shelters in Nevis and Anguilla. Navinder Singh Sarao was extradited to the United States and pleaded guilty to spoofing (placing orders with the intent of canceling them before execution) and wire fraud.

Now the twist: Prosecutors in Chicago have recommended Sarao be sentenced to time served. They cited his “extraordinary cooperation,” his autism and the fact he lost most of his $58.5 million in trading profits to fraudsters. A hard-ass sentence, they said, would have no deterrent value to others.

“Typically the way securities-fraud sentencing works,” writes Bloomberg columnist Matt Levine, “is that the sentence is proportionate to the amount of loss that you caused, which means that if you cause a trillion-dollar flash crash you go to prison for a trillion years, even if (1) the trillion dollars mostly came right back, (2) you only made $58.5 million and (3) you didn’t even spend most of it. Here, though, reason seems to have prevailed, which is nice.”

Meanwhile, the more likely cause of the flash crash remains, as the saying goes, “shrouded in mystery”…

Now a quick follow-up to the reader who wrote us on Tuesday about American decline and specifically about Peter Zeihan, author of titles like The Absent Superpower.

We forgot all about it until now… but Zeihan once debated our own Jim Rickards on the proposition: “Declinists Be Damned: Bet on America.”

It was part of the “Intelligence Squared” debate series. Took place five years ago, but we daresay everyone participating would stick with their broad-stroke positions today. You can watch it here.

“Why would any man want to live up to the impossible standard of being a beauty?” a reader writes after we explored the phenomenon of middle-aged men getting plastic surgery to enhance their career prospects.

The 5: Couldn’t say, you’re asking the wrong guy. Somehow I ended up with good genes in that regard. A while back, my sister wondered if I was coloring my hair. Heaven forfend!

“Hi, Dave — Love your prose. Very enjoyable to read like Mr. Bonner,” writes our final correspondent, “and excellent responses to many different mailbaggers.”

The 5: Ah, I’ll never hold a candle to Bill — either as a businessman or a wordsmith. But you’re very kind…