From Greg Guenthner’s lips to Mr. Market’s ears: “I suspect traders will use the China virus news as an excuse to bail if the market starts to slip,” said our resident chart hound here on Thursday.

On Friday, with news of a second U.S. case, the Dow slipped 170 points. This morning, with the virus continuing to spread through China and U.S. cases now totaling five, the Big Board opened down 500. The Wall Street Journal cites “escalating concerns about the containment and potential economic impact of the dangerous outbreak.”

Oil is pulling back even harder, a barrel of West Texas Intermediate down nearly 2.5% at $52.89 — a three-month low.

Zach recalls the scare of the SARS virus in 2002–03. “It also originated in China, where it’s believed to have crossed over to humans from bats.

“As news of the disease spread, Asian economies started to suffer. People in the region were afraid to leave their houses and tourists cancelled their trips — grinding consumer spending to a halt.

“Naturally that had a chilling effect on the stock market, causing Asian indexes to tumble… leading to stock losses in other countries, too.”

But in the end, the market and economic impact was limited.

“Of the 8,273 cases reported worldwide,” says Zach, “about 775 of the patients ended up dying.” To be sure, the high mortality rate was scary — nearly one in 10. But most of the dead were over 65 — terrible for their loved ones, yes, but the impact on any one country’s workforce was negligible. No economic slowdown to speak of.

This time, so far, the mortality rate is much lower. The bad news is the number of confirmed cases has tripled in the last three days.

On his Twitter feed this morning, our macro maven Jim Rickards directs us to a real-time dashboard from Johns Hopkins University. As we write, the confirmed cases total 2,886 — all but 61 of them in mainland China. The death toll is 81. 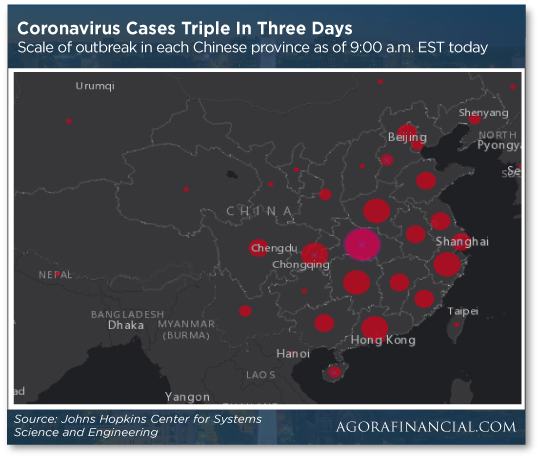 One of Jim’s followers pointed out that Hopkins is relying on official Chinese government figures — and how reliable are those?

A fair point, Jim allows. “Still, baselines are important. The real value of the site is trend analysis (in confirmed cases and geography) even if site data lag anecdotal reports.”

So far it seems as if the Chinese government is more forthcoming with information about this current outbreak than it was with SARS.

“All indications are that this form of the virus isn’t nearly as severe as SARS was,” says Zach Scheidt. “It’s also not as contagious.” On the downside, you can be symptom-free but infectious as hell for several days before you start feeling punk.

“We’re not talking about biblical-level devastation. But don’t expect the mainstream media to report it that way,” says Zach.

“If there’s a sudden spike in breakouts, news networks and websites won’t hesitate to break out their scariest headlines. Expect the indexes to dive again soon after.

“I don’t want to be too glib — it is a serious disease, and you should take basic precautions to protect yourself. But I wouldn’t cancel any travel plans… and I certainly don’t recommend selling any of your stocks.

“In fact, coronavirus fears could give us an opportunity to pick up more shares of our favorite companies at bargain prices.”

“This decline feels a lot worse than it really is,” says the aforementioned Greg Guenthner, “because: A) there’s scary news happening and B) the stock market has lulled everyone to sleep by shooting straight up since early December.”

As the day wears on, the Dow has trimmed its losses to less than 400 points, and crude is back above $53.

The big economic number of the day is a surprise. New home sales took a 0.4% spill in December. But for now, that’s an outlier in a trend that’s been moving steadily higher for the last year.

We’re headed into the heart of earnings season this week — with nearly a third of the S&P 500 companies set to report.

“Once again, we expect earnings to beat analyst expectations,” says our ex-investment banker Nomi Prins. “The pattern is not exactly rocket science.”

It’s an old story by now: A company “guides lower” ahead of its earnings release… so that analysts lower their expectations… and then when it’s time to report, the company delivers a “beat.”

“One way of looking at this phenomenon is that companies have gotten very good at managing Wall Street,” says Nomi. “Another way is acknowledging that Wall Street is complicit in the expectations management game.

“Whatever the case may be, the result is that share prices tend to do better under these circumstances. We don’t expect the first quarter of the new decade to be any different.”

“The biotech sector is closing in on a major breakout level right now,” says Ray Blanco on the science-and-wealth beat.

That would be a refreshing change: “Few folks realize it, but between the middle of 2018 and the middle of last year, the average biotech stock shed about 20% of its market value. Meanwhile, the S&P 500 was in positive territory over the exact same time frame.

“Winning consistently in biotechs over the last couple of years has taken a ton of stock-picking acumen — otherwise, big winners were, on average, met with even bigger losers.” 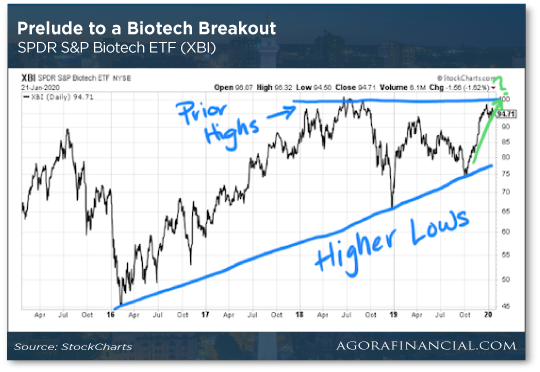 “After a tumultuous couple of years that unwound the long-term rally that kicked off back in 2016,” Ray says, “XBI is back within spitting distance of all-time highs just below the $100 level.

“The whole biotech sector is only up about 6% from its highs in the middle of 2015. So over the course of almost five years now, this sector has mostly moved sideways. But the rest of the S&P 500 is up 70.5% over that same period!

“That leaves a lot of room for biotechs to make up for lost time. A push to new record highs for the biotech sector sends a clear signal that bulls have finally regained control of this important market.”

For the record: We’re not the only ones giving Amazon CEO Jeff Bezos the side eye when he describes how his phone was hacked.

As we mentioned last week, Bezos commissioned an outfit called FTI Consulting to do a forensic analysis of his iPhone. FTI concluded a WhatsApp account linked to Saudi Arabia’s Crown Prince Mohammed bin Salman was probably used to get into the phone. It was the crown prince who in all likelihood ordered the murder-dismemberment in 2018 of journalist Jamal Khashoggi — employed by another Bezos property, The Washington Post.

Saturday’s Wall Street Journal did some valuable follow-up, querying independent cyberforensic specialists. (Hey, we give the mainstream its due when it’s deserved.) “They say the audit left several major technical questions about the incident unexplained and in need of more examination,” says the report.

It seems FTI didn’t even bother “jailbreaking” the phone so it could review all the files contained on it. “If your goal is to determine if there is nation-state-level malware on a device, you can’t do that without a jailbreak,” says Stanford University’s Alex Stamos, former chief security officer at Facebook.

As it happens, FTI is a publicly traded company — ticker FCN. Amid a sea of red in the markets today, it’s up a bit — trading around the same level it was when the news broke last Wednesday. Hmmm…

It’s come to this: A prospective lawyer has been denied admission to the bar… because of the debt she took out for law school.

“By way of background,” writes Adam Minsky at Forbes, “some states have statutes that provide for the suspension or even the revocation of professional licenses due to student loan debt.” Usually, the law kicks in only in the event of delinquency or default.

But not for Cynthia Marie Rogers — recently denied a law license by the Ohio Board of Bar Commissioners. Her student debt totals more than $300,000. Her husband has racked up even more debt; their combined balance approaches nearly $900,000.

She’s current on her payments and in compliance with federal repayment programs that will ultimately end with a portion of the debt being forgiven after 25 years. But the clincher for the board was her statement that she “knew there was no way for 20 years that I would ever be able to pay all that back” — especially considering she planned to work only part time in legal services. The board declared that statement “troubling.”

OK, it didn’t help matters that Rogers “filed nearly 60 civil lawsuits during the course of her lifetime, many of them frivolous” — a fact she didn’t mention to her references.

That said, Minsky writes, “the fact that an applicant was denied entry into her chosen profession at least in part due to her student loan debt… is troubling to consumer advocates.”

We’ve said for years the health care system as we know it is unsustainable and will probably crack sometime in the next decade. But higher education won’t be far behind, and for many of the same reasons — government interference that’s driven costs beyond sanity.

“I decided to dive into the market’s record move higher,” a reader writes, “and try to put it into perspective by trying to compare it to the Federal Reserve involvement.

“I use a chart of M2 money supply and plot against the Dow Jones index, S&P 500 and Nasdaq.

“I decided to look at a timeline starting about the year 2000 around the market crash and continued it to current day.

“What this leads me to believe is that since the turn of the century the markets are playing catch-up to the M2 and if the old saying ‘Don't fight the Fed’ is to be believed, I think this put the market action into a new perspective.

“Keep up the great work.”

The 5: Interesting. If your thesis holds up, it’s bad news for the perma-bears. And another reminder of Keynes’ old saw about how the market can stay irrational longer than you can stay solvent, no?

From Texas, a reader reacts to the influx of Californians we’ve noted in recent days…

“Texans Recycle-Send 'Em Back (with an outline of California crossed out) is becoming a common cry here.

“Californians (with some exceptions) bail out, come here and want to turn it into California politically and culturally. Ain't working out. Keep that in mind when the topic presents its ugly head.”

The 5: Thanks for the ground-truth perspective. Wonder how all those Nevadans and Arizonans feel…

P.S. Tax season officially opens today — in the sense that this is the first day the IRS will accept your return.

But don’t be in a rush to file and collect your refund. First, we urge you to consult the 2020 Rich Dad Tax Guide — prepared by Robert Kiyosaki’s crack team of tax experts.

You can claim your copy at this link.