Battle Inside the Deep State 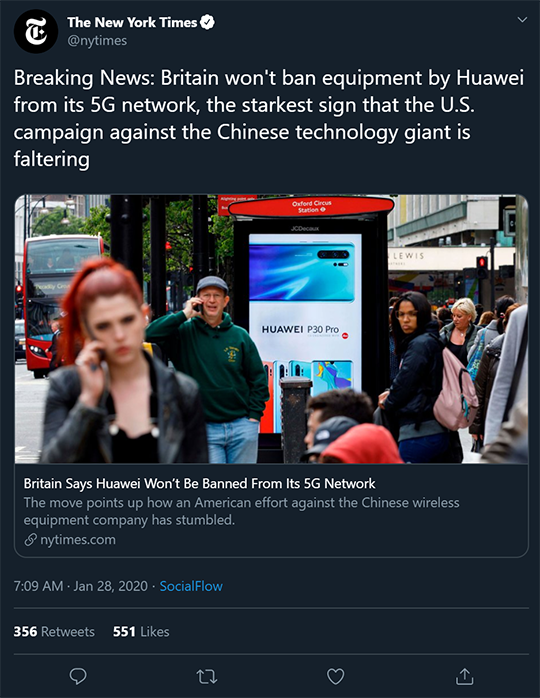 There’s a bit more nuance to it than the headline conveys. China’s Huawei Technologies Co. is banned from supplying “sensitive parts” of the U.K.’s 5G network.

“In addition,” says the BBC, “it will only be allowed to account for 35% of the kit in a network’s periphery, which includes radio masts. And it will be excluded from areas near military bases and nuclear sites.”

Still, there’s no denying a major U.S. ally just pushed back — hard — against Washington’s role as the “economic policeman of the planet.” (Those were the words of the French finance minister in 2018.)

The Trump administration seeks to stymie Huawei’s dominance of next-generation 5G technology — accusing Huawei of posing a potential spying threat, given its alleged ties to the Chinese Communist Party. (Of course, that spying has gone both ways for many years — as we learned from the Edward Snowden documents.)

Even before London’s decision was official, House Republicans introduced a bill yesterday that would bar U.S. intelligence sharing with governments that let Huawei’s foot in the door.

Key point: This isn’t the first time London has turned its back on Washington and toward Beijing.

Five years ago we chronicled how governments around the world were falling all over each other to join the Asian Infrastructure Investment Bank — an outfit Beijing set up as a sort of rival to the World Bank. Britain was among those countries.

The Obama administration objected but could do little more than stamp its feet. As our Jim Rickards tweeted at the time… 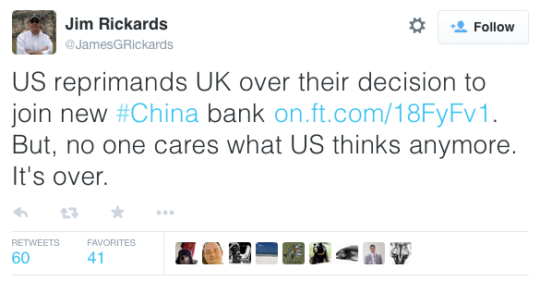 But it’s another Huawei development that’s really got our attention these days — a battle within the deep state.

Back in May, the Commerce Department placed Huawei on a blacklist of Chinese tech companies, making it harder for U.S. companies to sell Huawei their wares. Huawei makes up a big part of many tech firms’ sales — 12% in the case of Micron Technology, per the company’s latest annual report.

But there was a sizeable loophole, as The Wall Street Journal explains: “If chips and other electronics are produced overseas and contain less than 25% U.S.-made content subject to export restrictions, those goods can be shipped license-free to Huawei.”

The loophole was big enough that adding Huawei to the blacklist had little effect. So Commerce got to work drawing up new regulations — lowering that limit from 25% to 10%.

Last week, the Commerce Department withdrew those proposed regulations, because — get this — the Defense Department objected.

Here’s how the Journal explained it on Saturday: “The Pentagon is concerned that if U.S. firms can’t continue to ship to Huawei, they will lose a key source of revenue — depriving them of money for research and development needed to maintain a technological edge…

“About a third of the Pentagon’s $738 billion budget is spent on procurement and research, much of that going to military suppliers that make up what officials call the ‘defense industrial base’…

“If those companies can’t continue to ship to Huawei, Pentagon officials feared, the firms would fall behind economically and not have the funds to invest heavily in research and development.”

Just let that sink in for a bit…

But as far as Uncle Sam is concerned, this industry is a mere tool for achieving his own “geostrategic” objectives. And at the moment he’s of two minds about how that tool should be deployed… with a world-changing multitrillion-dollar industry caught in the middle, unsure what course to take.

This is what Eisenhower was talking about when he warned about “the acquisition of unwarranted influence… by the military-industrial complex.”

To the markets, which have ceased their Wuhan coronavirus freakout for the moment.

That’s even though the number of confirmed cases has grown 50% in the 24 hours since we wrote you last… the CDC advises Americans to avoid “nonessential” travel to China… and screening for the virus is being expanded from five U.S. airports to 20.

But as we write, the Dow rests at 28,762 — recovering roughly half of the ground lost in the big drop yesterday.

“Yesterday’s drop was not a definitive flush — just your standard drop after a big run,” says our Greg Guenthner. “We’ll see what the tone is surrounding earnings news this week.”

Among the earnings highlights so far are a “beat” from United Technologies ahead of its merger with Raytheon… and disappointments from Pfizer and 3M. The big one, though, is Apple — which reports after the closing bell today amid breathless anticipation about a 5G iPhone.

The U.S. manufacturing slowdown isn’t over yet — not judging by the latest durable-goods report from the Commerce Department.

As a reminder, “durable goods” are anything designed to last at least three years — washing machines, drill presses, jet engines.

The headline number is misleading — a 2.4% jump in December, way more than expected. But that was driven by a 168% surge in orders for military aircraft.

If you strip out military goods and aircraft of any sort — where sales fluctuate wildly month to month — you have a category called “core capital goods.” And that dropped 0.9% for December, in contrast with expectations for a 0.2% increase. Oops. 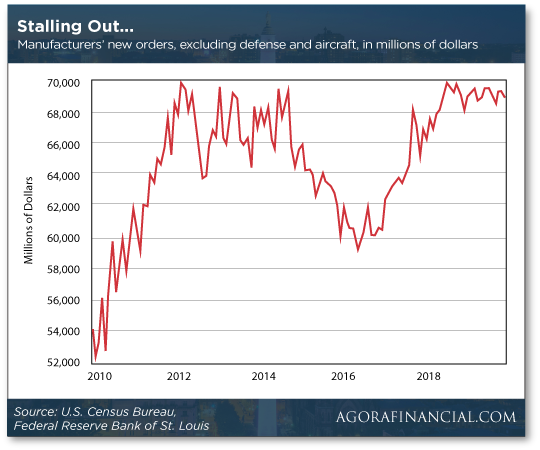 Orders are down across the board — primary metals down 0.6%, electrical equipment down 0.6%, machinery down 1.1%.

But hey, who cares when the consumer confidence numbers are up, right? The Conference Board’s consumer-confidence reading for January clocks in the strongest since August. As economists are fond of telling us, consumer spending is two-thirds of the economy. (That’s a vast distortion but well beyond the scope of our 5 Mins. today. Some other time.)

The most important development in autonomous-vehicle technology this month came not from an automaker… but from the Transportation Department.

So says our startup-venture capital-technology guru James Altucher, emptying his notebook from this year’s Consumer Electronics Show in Las Vegas.

“As part of the announcement, which is the fourth edition of the guidelines, Chao emphasized that the ‘federal government is all in — for safer, better and more inclusive transportation, aided by automated driving systems.’

“The announcement reflected the hands-off approach the government is taking with regard to the development and commercialization of self-driving tech, entrusting critical decisions to developers wherever feasible.

“One of the major barriers preventing more widespread commercialization of driverless tech continues to be the unclear regulatory and legal landscape under which self-driving cars would operate. With the release of the latest policy document, the groundwork continues to progress toward a driverless future.” 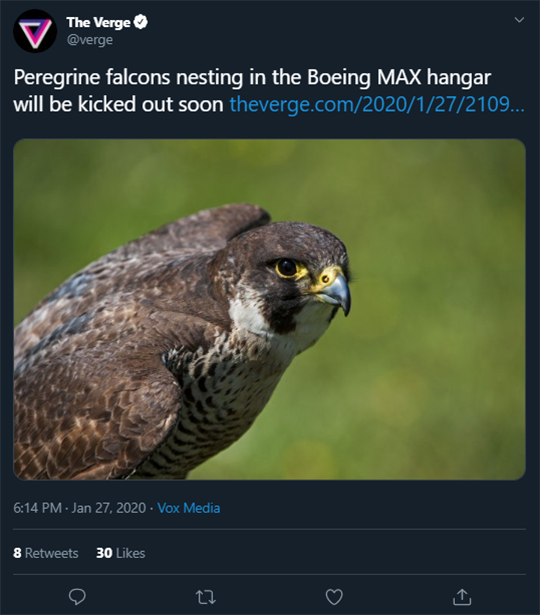 “For about four years,” writes Evan Bush of The Seattle Times, “a pair of peregrine falcons has been nesting inside the massive factory where the 737 Max is assembled, making their home on metal girders several stories above workers. The raptors feed on pigeons and starlings unfortunate enough to flutter through hangar doors.”

It’s unusual for peregrines to nest indoors… but with a structure that large, they made themselves at home. Now, though, with the plant idled and the doors closed more often, the falcons have to go.

“The Boeing falcons are at risk of starving inside the hangar if they can’t get out to hunt,” explains The Verge website, “and if the other birds they sometimes snack on (yes, they feast on the occasional stray pigeon inside the hangar) can’t get in.”

Trapping and relocating peregrines is no small task. Worse, “wildlife experts say the birds may return to the hangar no matter how far away they are relocated.”

“SMH,” says one wag on Twitter — short for “shaking my head.”

“Boeing wants to boot the only thing capable of flight in that hangar.”

“Dave, I too have been watching the Federal Reserve drop its nightly liquidity bombs on Wall Street since September,” writes one of our regulars after our latest exploration of the topic a few days ago.

“Of course, they describe their repo operations as ‘loans’ (right — just don’t call it QE4). But even after four months and a $400 billion-plus expansion of their balance sheet, they won’t disclose who is getting all that money. So they’re being as nontransparent as ever and still just getting warmed up!

“Could the Fed’s primary dealers be the recipients? Based on how the stock market is behaving, it sure looks like the money is being routed there via investment banks.

“Even some super-smart money folks seem to be struggling to make sense of all this. The legendary hedge fund manager Paul Tudor Jones stated recently: ‘We’re just in the craziest monetary and fiscal mix in history. It’s so explosive it defies imagination.’ He was speaking about the situation in general but was hobnobbing with the elites in Davos at the time. If that’s a consensus view, it speaks volumes.

“(Apologies for citing a quote from a CNBC interview. Ugh. Luckily he gets to the point before all the birdbrains start chirping.)

The 5: Actually, we know the primary dealers are the recipients. The New York Fed has been upfront about that much. We just don’t know which.

As a quick refresher, primary dealers are the couple dozen Wall Street firms that are required to show up at every Treasury auction in exchange for a host of special privileges with the government and the Federal Reserve.

To date, the loans total $6.6 trillion, write Pam Martens and Russ Martens at Wall Street on Parade: “The giant sum has been sluiced to Wall Street in the form of repurchase agreement (repo) loans without any details being provided to the elected representatives in Congress as to which firms are getting the money or what it’s being ultimately used for.”

The Martenses point out the Fed did much the same during and after the 2007–09 financial crisis — with the total reaching $29 trillion.

Hey, four months and change into the repo rescue and we’re already well over 20% of that total!

But no, there’s nothing to see here, right?