Cannabis-Derived Antibiotic (30-Year Wait Is Over?)

“Unlike other drugs, antibiotics stop working over time,” he said. “Bacteria evolve resistance, and eventually, even our best drugs can no longer kill them.”

We bring this up against the backdrop of the coronavirus outbreak in China which, at the time of writing, has infected about 7,700 people with roughly 170 fatalities.

Not that bacteria are the same as a virus. No, viruses are pernicious beasties that can — in certain cases — be eradicated with antivirals or, better yet, prevented altogether with vaccines.

Notwithstanding, “Antibiotic resistance has become a major threat to public health,” says a recent article at The Guardian.

According to Dame Sally Davies — England’s former chief medical officer — without potent antibiotics, we could see global “apocalyptic scenarios” with patients dying from run-of-the-mill infections and lifesaving surgeries made impracticable because of the risk of infection.

All to say there’s a crying need for new antibiotics, but “the newest [antibiotics] date back to discoveries made more than 30 years ago,” The Guardian says. In other words, ancient history when you consider how rapidly biotechnology advances.

Now there’s hope… and it’s coming from an improbable source.

“Researchers have recently learned that cannabis compounds could be enlisted in the fight against superbugs,” Ray says. In particular, methicillin-resistant Staphylococcus aureus — aka the dreaded, flesh-eating MRSA bacteria. 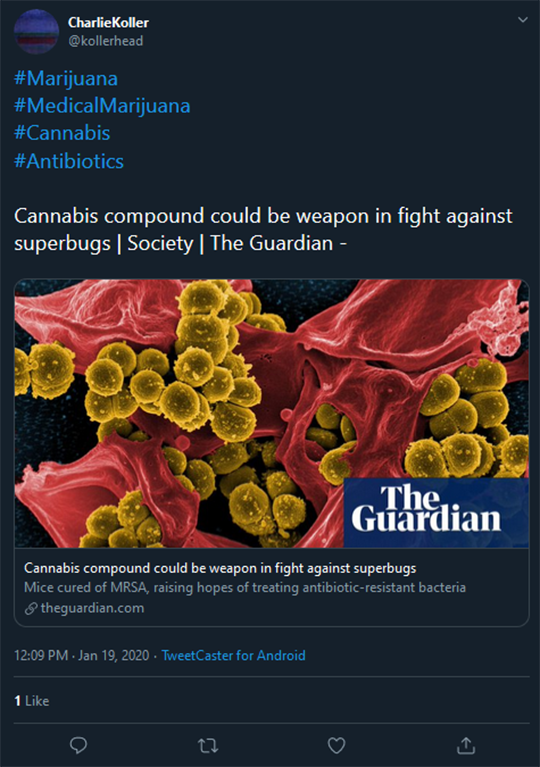 “A compound made by cannabis plants [cannabigerol (CBG)] has been found to wipe out drug-resistant bacteria,” The Guardian reports, “raising hopes of a new weapon in the fight against superbugs.”

In a study at McMaster University in Ontario, mice infected with MRSA “were treated with cannabigerol (CBG),” Ray says.

“The cannabinoid killed MRSA cells dead,” he continues, “even the hardier ones that are sometimes left behind after a bout of antibiotics. CBG even cleared up biofilms, a bacterial defense mechanism that can block penetration by antibiotics.”

So how do scientists believe cannabis might play a critical role in the fight against drug-resistant bacteria?

From The Guardian: “Mark Blaskovich, who studies antibiotic cannabis compounds at the University of Queensland, said cannabis seemed to be particularly rich in antibiotics.”

Mr. Blaskovich says: “These are likely made as a defense mechanism to protect the plant from bacterial and fungal infections but to date have not been very useful for human infections as they really only work outside the body.

“That’s what makes this new report potentially exciting,” Blaskovich continues — “evidence that cannabigerol is able to treat a systemic infection in mice.”

Ray says: “Humans have long used plant-derived medicines. And cannabis is under study for many disease indications out in the biopharma world.

“This new application as an antibiotic could potentially save thousands of lives.” Hmm… possibly millions.

So don’t be left behind as an under-the-radar market goes mainstream in the very near future. And to help navigate your way through this fledgling industry, we recommend the Secret “$50 Pot Stock Blueprint” that maps out which pot stocks to buy… and when.

You don’t need to know about pot stocks, and you don’t need a lot of time or money — all the guesswork is done for you. And now’s the time to get in on this offer before March 2.

Learn all the details here to get on your way to robust returns from pot stocks.]

(Gulp) Bad news for Facebook: The social media giant reported desultory earnings — and with that, $50 billion in market cap wiped out.

Facebook’s earnings sticking point? The company reported a 51% increase in expenses compared with 2018 total expenses. So far, FB shares are down almost 7%.

Whether the markets are responding to Zuckerberg’s travails or coronavirus fears, we’re seeing a lotta red today…

We’d be remiss not to mention the FOMC meeting Wednesday, where the Fed said it will stand pat on interest rates. According to Yahoo Finance: “The Fed tweaked its description of inflation to say that policymakers see current policy supporting inflation ‘returning’ to its 2% target, as opposed to ‘near’ its 2% target as the December statement noted.”

If you’re job hunting — and have a JD — the DOJ’s hiring! That is, if you want to work in San Francisco (and don’t get us started on the cost of living in the Bay Area)…

Why San Francisco? It’s ground zero for the Antitrust Division that’s seeking to hire an unspecified number of trial attorneys who specialize in “digital markets.”

That’s right, the DOJ’s lawyering up for its Big Tech probe (heh… we think that’s the right word) — something we reported earlier this month.

According to the job posting at Justice.gov, the right candidate “will have specialized training opportunities to gain expertise in both digital technologies and the application of antitrust law to platform markets.”

The thinly veiled digital “platform markets” put Facebook, Amazon and Google squarely in the feds’ crosshairs. Oh, and Apple too.

What’s interesting to us is how Microsoft escaped the government’s notice… and won the Pentagon’s $10 billion JEDI cloud-computing contract over Amazon Web Services (AWS).

[Sidebar: Microsoft spent 21 years fighting the U.S. government in a historic antitrust case that started in 1990 and finally settled in May 2011. “At issue was whether Microsoft had used its Windows monopoly to force computer makers to exclude a browser made by Netscape on their PCs,” says an article at The Seattle Times.

Somewhere along the way, Bill Gates stepped down as Microsoft’s CEO, the company stayed in one piece and MSFT shares were pretty much range-bound from 2000–2011. Since settling with the feds in 2011? It’s off to the races — up about 150%.]

Sour grapes or not, Amazon is suing the DOD in the Court of Federal Claims.

Amazon’s lawyers allege: “Under escalating and overt pressure from President Trump, DoD departed from the rules of procurement and complied — consciously or subconsciously — with its commander in chief’s expressed desire to reject AWS’ superior bid.”

We’re not holding our breath for a resolution…

If Microsoft’s any indication, tech giants aren’t going down without fighting antitrust cases. And let’s face it, they have billions to spend on legal fees. What’ll be interesting to see is if Facebook, Amazon, Google and Apple stock will imitate MSFT during legal proceedings. Grab the popcorn…

“In cities across India, tens of thousands of people have been demonstrating against an amendment to the country’s citizenship law, which was passed by parliament on Dec. 11, 2019,” says an article at Foreign Policy.

Protests have swept the subcontinent, marking the biggest backlash that Prime Minister Narendra Modi’s administration has encountered since he took office in 2014.

Foreign Policy says: “The protests have been met with a strong state response, including the deployment of troops, internet blackouts and the imposition of curfews.” 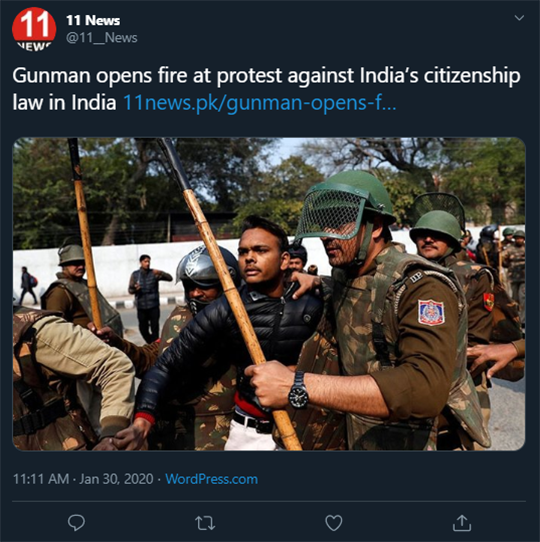 Under debate is the Citizenship Amendment Act of 2019 (CAA), which promotes a quicker path to Indian citizenship for those who’ve been persecuted on the basis of religion if they entered the country on or before Dec. 31, 2014.

The act covers citizenship-seekers from three countries — Afghanistan, Bangladesh and Pakistan — and lists a host of religious affiliations… with the glaring exception of Muslims.

Without getting into a centuries-long hairball, protestors are claiming — and we think rightly so — that the CAA violates India’s secular constitution.

“Despite the significance of the protests,” Foreign Policy says, “it might not signal a change in the way the Modi government operates.

“The government believes divisive politics pays electoral dividends… The Modi government’s chosen strategy in the face of any kind of protests or opposition is to construct an ‘us versus them,’ ‘national versus anti-national’ narrative.

“This strategy is no different from that followed by populist leaders elsewhere,” Foreign Policy concludes.

For our purposes, we’ve been following India in light of Modi’s bold-faced attempt to create a cashless society.

In November 2016, India’s government banned the country’s most commonly used banknotes — about 85% of the cash in circulation. Indians were required to deposit their cash in a bank account or convert it to other denominations.

Which works in concert with the National Register of Citizens (NRC) — exactly as it sounds — something Indians are also bristling against for its “Big Brotherish” overtones and potential for discrimination. The NRC was approved by parliament in November 2019… perhaps to pick up the slack after going cashless failed?

For now, cash is still king in India… but we’ll keep you posted on Modi’s grand experiment in the world’s biggest democracy.

“Yale will stop teaching a storied introductory survey course in art history,” the Yale Daily News reports, because it features an “overwhelmingly white, straight, European and male cadre of artists.”

Ahh… more political correctness run amok: Introduction to Art History: Renaissance to the Present will take its final bow this Spring semester. In response, demand for the course heightened as 400 Yalies tried to enroll in the class that’s capped at 300.

The one-stop art survey will be replaced with a spectrum of more-inclusive classes: for example, Art and Politics, Global Craft, The Silk Road and Sacred Places.

Says Mahlon Sorensen, class of ’22: “My biggest critique of the decision is that it’s a disservice to undergrads.” Do tell, voice of reason…

“If you get rid of that one all-encompassing course, then to understand the Western canon of art, students are going to have to take multiple art history courses. Which is all well and good for the art history major, but it sucks for the rest of us, which, I would say, make up the vast majority of the people who are taking [the course].”

“I just wonder if you had hired someone who specializes in forensics to evaluate your email delivery issues?” a reader asks.

“You are clearly a voice in the wilderness on many topics that ‘The State’ would like to silence you on — including topics on unsustainable debt and what I believe are alarm bells sounding in the repo market.

“What on Earth could have banks so terrified that they are unwilling to lend cash overnight for anything less than 10% in September? And that is fully collateralized with supposedly the safest debt on Earth, Treasuries?

“It’s times like these I’m glad I have plenty of risk insurance in the form of precious metals.”

As for a conspiracy to silence us, we think not… but we’re just as eager as you to get The 5 back in your inbox ASAP.

P.S. Take action before March 2… and you’ll have the opportunity to turn a $50 grubstake into a windfall.

But you DO need to know which pot stocks to buy… and when to buy them.

That’s where the secret “$50 Marijuana Stock Blueprint” comes in. It’ll map your way to riches — but you have to get in before March 2. Learn why right here.