When they shut down the casinos in Macau, you know the coronavirus is getting serious.

Like Hong Kong, Macau is a former Western colony that reverted to Chinese control in the late 1990s and retains a separate system of governance. It’s become an enormous gambling destination — with an industry seven times the size of Vegas.

Overnight brought word that Macau’s government has asked management at the city’s 41 casinos to suspend operations for two weeks.

Sucks if you’re Steve Wynn or Sheldon Adelson — all the big-name operators have a Macau presence — but what’s the economic impact of the virus on a wider scale?

“We’re still in a period of uncertainty when it comes to the human and economic cost of the coronavirus pandemic and the extent of the pandemic itself,” ventures our macroeconomic maven Jim Rickards.

Overnight the number of confirmed cases reached 20,704, with 427 deaths. The chart of confirmed cases maintained by Johns Hopkins appears to be leveling off… but as we write there’s still time for the Chinese authorities to update today’s figures… 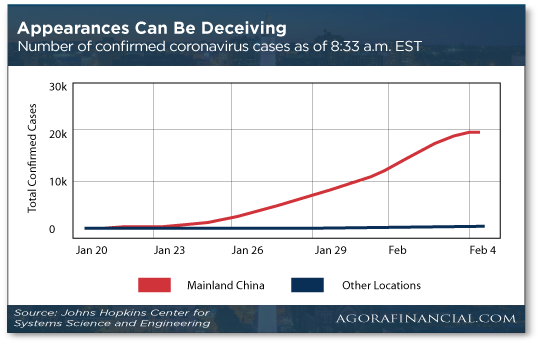 For whatever it’s worth, the World Health Organization has once again begged off labeling the outbreak a pandemic.

“While the long-term medical outcome is uncertain,” says Jim, “the short-term economic damage is not.

“Their consumer economy has stalled as people stay home and avoid public transportation, stores and restaurants. Tourism is dead and many businesses are requiring that executives cancel trips to China until further notice.

“This comes at a time when the Chinese economy was slowing anyway. Stimulus measures in the form of monetary ease are being tried, but are unlikely to work because of China’s sky-high debt levels.

“Let’s hope the coronavirus is contained soon. Unfortunately, the damage to China’s economy is already happening and will persist even if the virus is soon under control.”

So how goes the search for a treatment?

We turn to our science-and-wealth authority Ray Blanco: “Already the CEPI, an international coalition dedicated to developing vaccines to derail epidemics, has agreed to fund three programs to develop a cure: those of Inovio Pharmaceuticals Inc. (INO), Moderna Inc. (MRNA) and the University of Queensland in Australia.

“Each of these entities brings different specialties to the scene and offers various ways to tackle the coronavirus.

“When this deal was announced, the markets took notice. Inovio’s stock, for instance, shot up over 50% within a few days of the announcement.”

But really… is that healthy, normal market action?

Before you answer, Ray directs your attention to this chart… 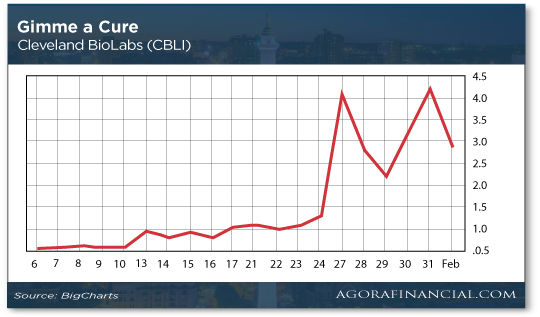 Here’s the thing: “While CBLI has done work in treating cancer and immunotherapy,” Ray tells us, “it has no prior experience with developing vaccines — for the coronavirus or any related strain.”

“I wouldn't jump into these biotech viral stocks,” says Ray. “There’s way too much volatility and uncertainty in the markets right now to know who will come out on top.

“Especially with these smaller stocks, it’s easy to get burned when things don’t pan out the way you hoped they would. It follows the old adage ‘Buy the rumor, sell the news.’

“Sure, you’re able to make a lot of money off global events like these… but you have to time it perfectly. And in a lot of current cases, it’s likely that opportunity has passed.”

Of course Ray will remain alert in case the window of opportunity opens again. But as far as a place to put your money in biotech right now, he’s much more excited by plays like these. Please note that he can accommodate only 85 new members today, for reasons you’ll see when you click here.

In the meantime, the markets are shaking off any coronavirus worries. It’s risk-on, baby!

At last check, the Dow is up nearly 500 points, approaching 28,900. If that holds, today’s close will be higher than last Thursday’s — before the big slide Friday and Monday. Virus? What virus?

Bonds and gold are getting slammed. The yield on a 10-year Treasury note is this close to 1.6%… while gold has slumped nearly $25 to $1,551, approaching its mid-January lows.

Crude briefly entered a bear market yesterday — a 20% decline from its recent highs — but is stabilizing this morning at $50.52 as rumors fly about Saudi Arabia cutting production.

The last of the “Big 4” stocks — or the “MAGA” stocks, if you prefer — has delivered its quarterly numbers… and Google parent Alphabet disappointed mightily with its bread-and-butter business of online advertising. At last check, GOOG is down nearly 3.5%.

And then there’s Tesla. *Sigh*

“Tesla stock is going crazy this morning, breaking above $900 for the first time,” says our Greg Guenthner. Indeed, TSLA shares have now doubled since the first of the year.

“But I wouldn’t touch it right now — on the long or short side. There are a ton of emotions running wild over this stock as it goes parabolic.”

Yep. Parabolic moves can last longer than anyone expects. Or this particular move could end minutes from now if Elon Musk gets a wild hair and goes on Twitter to declare himself the winner of the Iowa caucuses. (You can just see it, too, right?)

Avoid. “There are plenty of other nice plays on the market that don’t expose you to such massive risk.”

The economic numbers in recent days have been a mixed bag.

We spaced out yesterday and neglected to mention the ISM manufacturing index — which registered a positive reading for the first time in six months. Readings above 50 indicate a growing factory sector, and the number was 50.9 — way higher than expected.

The all-important new-orders component of the index clocked in at 52. But jobs and inventories remain below par.

Meanwhile, a reliable recession indicator is starting to flash yellow.

The Philadelphia Fed State Coincident Index crunches four different job numbers from each of the 50 states. The resulting composite figure is then put on a scale between minus 100 and plus 100.

Whenever the number dips below plus 50, a recession follows. That’s how it’s worked consistently going back 40 years.

The latest reading for December comes in at plus 56 — on top of two previous readings of 54 and 52.

Definitely the danger zone, but we submit a caveat: These numbers are often revised as additional data come in. We’ve had previous scares like this over the past decade — 2011, 2015 — and then the numbers turn out to be better after the statisticians get more to work with.

Elsewhere, the report shows the job picture got worse in eight states during the final three months of 2019. There’s mild weakness in Montana, Oklahoma, Iowa, Missouri and Vermont… more weakness in Pennsylvania and Delaware… and severe weakness in West Virginia.

The next edition of this report isn’t due until early April.

Petty theft on a princely salary: Citigroup has fired one of its top bond traders for… stealing eats from the company cafeteria.

His name is Paras Shah. At age 31, he was running the junk-bond desk for Europe, the Middle East and Africa.

“The bank suspended Mr. Shah after alleging he had stolen food from the canteen at its European headquarters in Canary Wharf, London, according to four people familiar with the matter,” reports the Financial Times, which was first with the story.

The Wall Street Journal, playing catch-up, found a source who said Shah earned about $1.32 million a year, including his bonus.

Nor apparently is he alone. The FT says in 2016, Japan’s Mizuho Bank fired a London banker for the offense of stealing a part from a colleague’s bicycle. And in 2014, regulators banned a BlackRock executive from high-level finance jobs because he was dodging train fare.

Gee, we know London has a sky-high cost of living, but c’mon…

Staying in the U.K., the Royal Mint has rolled out — well, get a load of this… 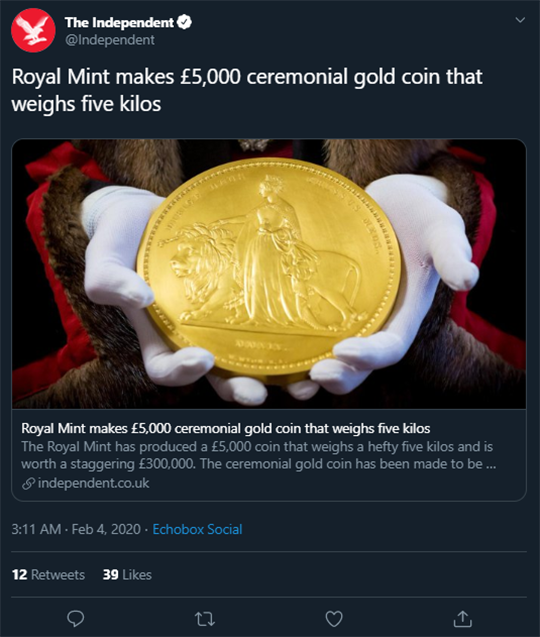 “Each year,” according to the Metro tabloid, “a sample of coins produced by the Royal Mint over the previous 12 months are selected for one of Britain’s oldest judicial processes, which dates back to 1248.

“It is held at Goldsmiths’ Hall and is presided over by the Queen’s Remembrancer, one of the highest legal representatives in the country, who is assisted by an independent jury consisting of members of the Goldsmiths’ Company” — which is a guild even older than this tradition.

Four of these coins were minted. Three will be tested for purity — which entails drilling into the coin and extracting samples — while the fourth is sold to a private buyer who gets one helluva keepsake.

A charming tradition, this. “For over 700 years our members have been actively involved in protecting consumers,” says Simon Hutchinson from The Goldsmiths’ Company, “by ensuring the nation’s coinage is of the right quality and composition.”

Yeah, no. That ship sailed long ago when the U.K. abandoned the gold standard. But appearances must be maintained. Or something…

This is not the time of year when we usually take up the cause of lemonade-stand liberation… but there’s an important development to pass along from Agora Financial’s home state.

Maryland lawmakers have introduced a bill that would bar counties and municipalities from regulating “the sale of lemonade or other nonalcoholic beverages by minors from a stand on private property.”

“We need to teach children it’s OK to have an entrepreneurial spirit,” says the bill’s sponsor Del. Neil Parrott (R-Hagerstown).

Parrott reached across the aisle for a co-sponsor, Steve Johnson (D-Aberdeen). “It’s about supporting our kids,” he tells Baltimore’s CBS station. “And at the end of the day, let kids just be kids.”

Testifying in favor of the measure recently was Xander Alarie, who was fined $500 by Montgomery County way back in 2011 — around the time we first began to chronicle these sorts of outrages.

Xander is now in the eighth grade. “I think kids should be able to sell lemonade, hot chocolate, food — whatever they want to sell, but especially on their property.”

Alas, if the legislation passes it won’t take effect until Oct. 20. One more summer for the busybodies to extract their proverbial pound of flesh…

P.S. Between now and the time the market opens on Thursday morning, you owe it to yourself to watch this video.

It’s only about two minutes long. In that time, you’ll learn how a few simple steps could set you up to collect $4,946 or more by this time next week.

But again, you need to watch before Thursday at 9:30 a.m. EDT. You’ll understand why when you follow this link.