As Dave reported yesterday, Beijing asked global gambling oasis Macau to shutter 41 casinos for 15 days after a worker fell ill with the coronavirus.

On the face of it, the closure might not be as dramatic as it sounds because the number of visitors to Macau casinos was already down 70% from the same time last year because of the viral outbreak. 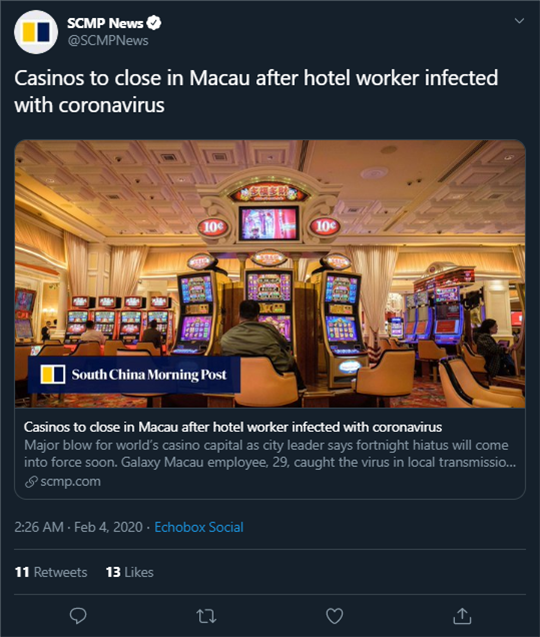 As far as revenue goes for Macau’s casinos, the February closure’s forecast to precipitate a decline of 65% year over year — in other words, disastrous.

Former board member at Las Vegas Sands Jason Ader says what’s happening in Macau should be a “wake-up call” for China’s gambling industry that online gambling should be legalized and regulated.

Mr. Ader notes illegal online gambling in Asia — mostly illegal — spiked about 90% over the Lunar New Year versus last year. Ader laments: “In Asia all this is lost business and tax revenue.

“Legalize it, tax it,” he concludes.

That’s what’s happening in the U.S. with sports betting as 14 states — and counting — have legalized it. Plus, sports betting is technically legal in six states plus D.C. It’s just not up and running… yet. 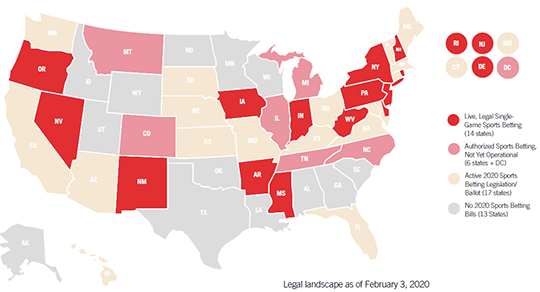 Seventeen other states have active legislation in the works, meaning “bills to legalize single-game sports betting have been pre-filed/introduced in the state legislature or where a voter referendum is scheduled,” according to the American Gaming Association.

And say what you will about President Trump, but he’s moving the ball forward… It’s been under Trump’s administration that an important piece of anti-gambling legislation was challenged.

“Before 2018,” our wealth-and-technology maven Ray Blanco says, “sportsbooks were restricted by the Professional and Amateur Sports Protection Act of 1992 (PASPA).

“Other than… four states with legal sports gambling already in place,” Ray continues, “no state was allowed to ‘sponsor, operate, advertise, promote, license or authorize by law or compact’ sports gambling.”

Until New Jersey decided the potential tax revenue was just too tempting to pass up and took the federal government to court. “The state argued that it had the right to regulate sports betting under the 10th Amendment of the U.S. Constitution,” Ray says.

[To refresh our memory, the 10th Amendment says: “The powers not delegated to the United States by the Constitution, nor prohibited by it to the States, are reserved to the States respectively, or to the people.”]

The case made its way all the way to SCOTUS, where the decision was emphatic: The court ruled in favor of New Jersey, overturning the existing law 6-3. “The power to make decisions on sports betting — including online — has been returned to the states,” says Ray.

With gambling adding $137.5 billion to the U.S. economy annually, according to 2018 Statista research, states are certain to want a piece of the sports-betting action — if only to get their share of an estimated $400 billion in illegal sports gambling.

If New Jersey’s any indication, the gambling revolution’s happening already. “In October [2019], the state… handled more than $250 million in bets, a 41% increase from the previous month,” MarketWatch reports. (Emphasis added.)

Ray’s convinced investing in the expanding sports betting industry’s akin to buying shares of Amazon… when the company first went public in May 1997.

“Had you held onto that original investment,” he continues, “it would be worth more than $3 million today.”

Ahh, to quote Cher: If I could turn back time… To Ray’s way of thinking, investing in sports gambling might be the next-best thing.

He’s on the lookout for companies with a “technological focus on the gaming industry” that also have a presence in casinos with AI-driven machines.

One company Ray recommends owns a sports-gambling platform that’s the engine behind a household-name casino app and the biggest online fan-betting sites around.

Ray’s takeaway on sports gambling? “Multiple states are implementing legalization,” he says. “Get in early on a national phenomenon… that’s radically changing the landscape of the gambling industry.”

[Ed. note: One sports-betting company Ray recently recommended to his readers has already taken off — up 28%. For access to this — and all of Ray’s in-depth reports — check out Technology Profits Confidential.] 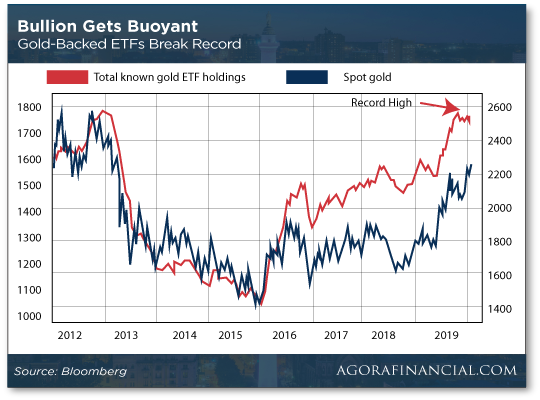 “The latest additions follow four straight years of inflows and come as prices of the traditional haven trade near the highest level since 2013.”

And you can’t simply chalk up the move into gold to the epidemic in China. “Gold ended 2019 with its best gains in a decade, closing up by 18%,” says Gavin Wendt of MineLife in Sydney, “so momentum was well and truly building in the ETF sector well before the coronavirus.

“The world remains a volatile place,” Mr. Wendt concludes, “which promises to continue to provide support for gold in 2020 and boost further inflows into ETFs.”

Hmm… remind anyone of something Greg Guenthner said yesterday?

One notable economic number today: The ISM nonmanufacturing index — which tracks sectors such as services, construction, agriculture and more — rebounded to its highest level since August. The service sector in particular beat analysts’ expectations even as consumer spending pulled back.

Yahoo Finance reports: “Five powerful tech companies” — that’s FAAMG (Microsoft and no Netflix) — “now comprise a hearty 18% of the S&P 500’s market cap… That has put the S&P 500 in an unwelcome category: the dot-com bubble.”

The “Big 5” stocks of 2000? Well, one’s the same: Microsoft along with Cisco, General Electric, Intel and Exxon Mobil. Bummer, no nifty acronym.

These tech superstars also comprised 18% of the S&P 500’s market cap. “Obviously, that didn’t end too well back in 2000,” Yahoo Finance says. “Investors were too concentrated in tech… during a time when the market turned rapidly risk-off and economic growth slowed sharply.

“The lack of diversification bit investors in the rear, plain and simple.”

What, even FAAMG bites?

Per the Iowa caucus cock-up yesterday, CNN’s Chris Cuomo was his usual sanctimonious self… 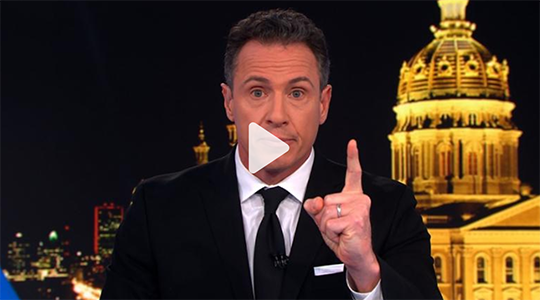 So what happened to the results from the 2020 election cycle’s first state caucus? “The [Democratic] Party relied on a dysfunctional app and a failed backup system involving a phone hotline that left callers on hold for hours,” says an article at The Nation.

Heh… sounds about as fun as waiting in line at the DMV (more on that later).

To set the record straight, it wasn’t so much that the app didn’t work, says The New York Times; it’s that “people were struggling to even log in or download it in the first place. After all, there had never been any app-specific training for the many precinct chairs.” (Emphasis added.)

We won’t bother to report early results for Democratic front-runners. We like how The Nation put it: “All we really know is that we don’t yet know enough to say who won.”

Time’s ticking: You have until Oct. 1 to fall in line with the Real ID Act of 2005. Meaning your state-issued driver’s license or ID card must have a star emblazoned on it… or else.

When we last reported on the Real ID debacle, a survey sponsored by the U.S. Travel Association found almost 40% of Americans didn’t have ID that’s compliant with the law.

[Sidebar: I happen to be one of the 40%… according to a friendly reminder I received from the nice people at Maryland’s Motor Vehicle Administration. I was further informed I’d need to present at least four forms of documentation to prove my existence and more.

I was also advised by a friend to bring along my marriage certificate, just in case.

To give you a rundown, I’ve got my original birth certificate (with a seal), a W-2 (shows my SS number) and two utility bills (proves my address). And I dusted off the marriage certificate.

I have to say, I scheduled an appointment online and received a call today to remind me of it. So… here’s hoping I’m not standing in line at the MVA tomorrow afternoon. Fingers crossed.]

Aww, c’mon, Twitter! The ban hammer’s fallen on Planters nuts (which sounds really bad… but we’re going with it).

Engadget reports: “Twitter has suspended three accounts tied to Baby Nut, the resurrected Mr. Peanut mascot that made his debut during the Super Bowl, for violating policies against spam and platform manipulation.”

If you watched the game Sunday, you probably saw Planters’ new mascot… 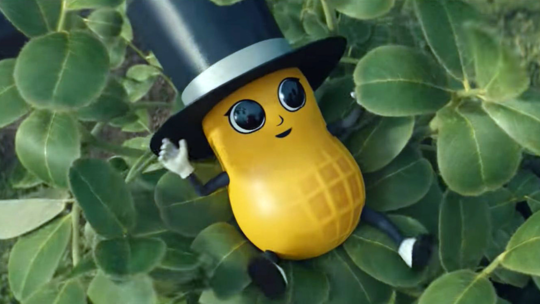 After the ad ran during the Super Bowl, “Its main @MrPeanut account [kept] retweeting the three as they shared memes shortly after Baby Nut made his appearance.”

Really? That’s it? Kraft Heinz — rather hangdoggedly, we think — says it will respect Twitter’s decision to suspend the accounts.

Engadget concludes: “The action suggests that Twitter is willing to crack down on coordinated accounts no matter who runs them….”

Emphasis ours. Planters wasn’t such a tough nut to crack.

That might set off an avalanche of wealth in the next 12 months.

Click here for all the details… But this opportunity will NOT come around again.