“The coronavirus outbreak may now be over in China by April, says the government who first denied its existence and virulence,” writes a snarky commenter at the Fark website this morning.

At last check, the number of confirmed cases appears to be leveling off — 43,138, all but 500 or so occurring in mainland China. The death toll has topped 1,000.

“What if those statistics are wrong and the extent of the disease is far worse than we realize?” asks Jim Rickards, eyeing the impact on the global economy and markets.

“The Chinese website Tencent (similar to Facebook or Twitter as a large social media platform) published figures that suggest the actual number of cases is closer to 155,000 and the number of deaths is about 25,000.

To be clear, those figures come from screenshots posted by everyday Chinese that appear to come from Tencent. “No news outlet has managed to independently verify if the screenshots were taken from the Tencent website,” writes Peter Schelden at MedicineNet. “It is also unclear whether they were altered, let alone how or why they were posted, if indeed they were.” 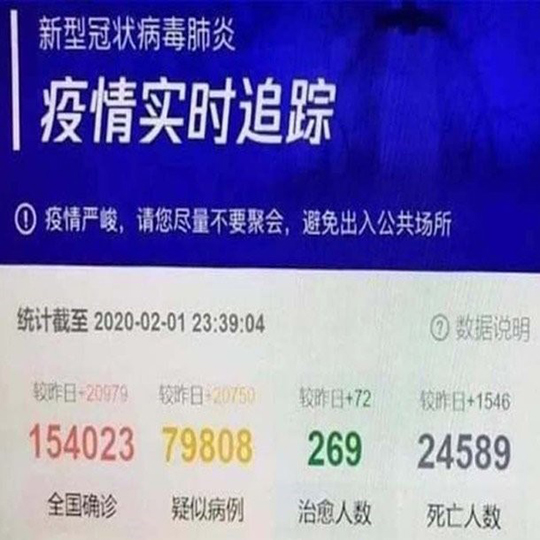 The numbers are scary… but are they real?

Then again, we know Chinese leaders have been less than forthcoming at times these last six weeks — especially at the outset. Same story with the SARS outbreak in 2003.

“Anecdotal evidence suggests that dead bodies are literally lying in the streets in Wuhan, the city most affected by the virus,” Jim says. “Those bodies were being whisked away in nonrefrigerated trucks and there is a reported shortage of body bags. Dead bodies are being cremated without autopsies or blood samples, so many coronavirus victims are not being identified as such.”

Jim’s bottom line: “If the Tencent figures are correct, this pandemic has much further and much longer to run.”

But let’s run with the official figures for argument’s sake.

“The total number of people in China under lockdown now exceeds 400 million (out of a population of 1.3 billion),” Jim says. “No quarantine of this scope has ever been attempted before. Streets are empty, planes and trains are not running, shops are closed and food is being hoarded.

“The best case is that the Chinese economy may drop from estimated 6% growth to 4% growth in the first half of 2020.”

The race for a treatment, at least, is showing promising signs of progress. “Major efforts are now underway at Imperial College London and medical centers in China and the U.S.”

Optimistic estimates point to a cure available by May. Optimistic and ambitious, Jim points out: “It often takes two years or more to develop an effective vaccine from a standing start.

“The world is engaged in a life-or-death race between the spread of the disease and the efforts of scientists to find a cure. Investors are rooting for the scientists but need to be prepared in case the virus wins the race.”

Meanwhile, “there's no doubt gold has got a boost lately by the ‘flight to quality’ in response to the coronavirus outbreak,” Jim says, turning to the investment implications.

“It's one reason we've seen a correlation between the strong dollar and strong gold prices.

“The immediate cause for concern is the coronavirus pandemic in China and beyond,” says Jim. “The response is to buy dollar-denominated assets and gold.”

But what if the virus is contained by April? “Does that mean gold will drop?” Jim asks. “No.

“The reason is that there are fundamental forces pushing gold higher over and above the coronavirus and safe-haven demand,” he continues.

“Russian and Chinese purchases continue unabated. Mining output continues to be flat. Momentum buyers such as hedge funds are finding trend-following profits. Above all, the Fed will have to lower rates again this year (probably in April or June), which gives gold another boost since the opportunity cost of switching from cash will be lower.

Of course, Jim has long recommended keeping 10% of your portfolio in gold as a safety valve. Meanwhile, he has something urgent for you to see if you’re thinking about buying stocks… and it’s not making him any friends on Wall Street.

Check out Jim’s urgent message at this link. Note that we’re taking it down tonight at midnight… for reasons that will become clear when you click.

Coronavirus? What coronavirus? The S&P 500 and the Nasdaq are inching higher into record territory this morning.

The Dow is still playing catch-up, though. At 29,338 the Big Board is still about 40 points off its record close last Thursday.

Traders are keeping half an eye on Federal Reserve chairman Jerome Powell’s twice-a-year appearance before the Senate Banking Committee. So far, nothing earthshaking. The Fed, he says, is “closely monitoring” the coronavirus situation. No, really?

Among the big movers today is Sprint — up a massive 71% after a federal judge approved its takeover by T-Mobile, which itself is up 10%. (Hmmm, who might claim Sprint’s coveted single-letter “S” ticker symbol? It belonged to Sears back in the day…)

Steady as she goes for small-business owners in early 2020, judging by the monthly Optimism Index from the National Federation of Independent Business.

“Quality of labor” continues to top the list when business owners are asked to identify their single-most important problem; it was cited by 26% of survey respondents.

Cue the annual freakout over the White House’s budget proposal.

Every year the Trump administration trots out a “bare bones” budget that “slashes” various spending programs. And every year, no matter which party is in charge of the House and Senate, the budget cuts are quickly forgotten and everyone goes on a spending spree.

And so it goes this year. This proposal chops $40 billion from nonmilitary “discretionary” spending (i.e., excluding Social Security and health care). There’s even a 26% cut to the Environmental Protection Agency’s budget.

It’s all for show — a sop to the dwindling number of Republicans who still say they care about small government. Rush Limbaugh knows which way the wind is blowing when he says, “Nobody is a fiscal conservative anymore.”

Under this “bare bones” proposal, the president who promised in 2016 to balance the budget by the end of a second term in early 2025 has now pushed out that deadline by a decade. We’re sure his successors, whoever they are, will commit themselves to his blueprint — heh.

We mock… but the consequences are real. On the current trajectory of federal spending, the Congressional Budget Office projects the national debt will be a drag on Americans’ annual personal income to the tune of as much as $6,000 per person by 2040. (And the CBO’s projections are usually optimistic, too!) 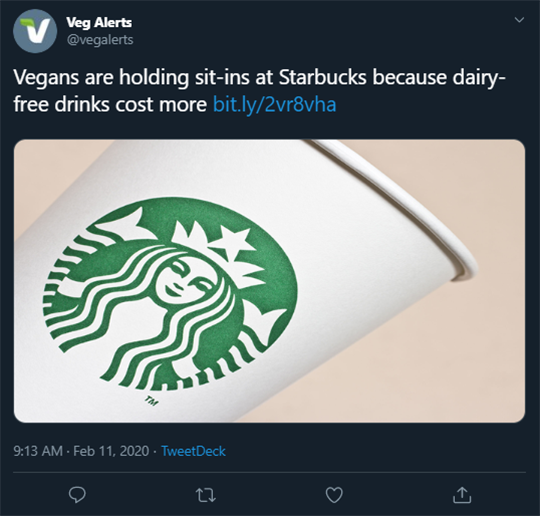 “Activists have been posting themselves inside Starbucks coffee shops across the U.S. and Canada with signs decrying the so-called ‘vegan tax,’ which they’ve argued is discriminatory against more than just vegans,” reports Business Insider

The “tax” works like this: If you get a latte with regular ol’ milk at a typical Starbucks in, say, the Midwest, it will set you back a little over $4. But if you substitute soy, almond or coconut milk, it’s an extra 60 cents — a 15% markup.

Starbucks isn’t speaking up in its own defense yet. “But part of the justification for the extra fee has been that plant-based milk is generally less common in orders than dairy milk,” says the Insider. Thus they’re sold in smaller, less cost-effective containers. Too, the formulation is different from what’s in the grocery store, the better to create that foamy coffee-shop goodness.

No matter, say the activists. “The extra charges are racist since a majority of people of color can’t digest lactose. It’s ableist, because it ignores food allergies. And it penalizes people for valuing the environment,” says author Julia Feliz Brueck.

As it happens, smaller chains like Pret A Manger and Stumptown have recently adopted a policy of no upcharge. Others may follow as the cost of processed soy products is coming down. Amazing what happens when the free market is allowed to do its thing…

“Let me see if I understand this correctly,” a reader writes after we noted some of the financial bigwigs helping to “steer” the results of the Iowa caucuses.

“The Democratic Party had an app created to report the results of the caucuses. Should we assume they had some huge computer system to tabulate this massive amount of data they were going to receive? I’m sure that everything went through extensive testing.

“Oh, wait, according to my Google search, there were a total of 1,761 caucuses in Iowa.

“Just between you and me, I hacked their administrative offices and got a picture of the technology. 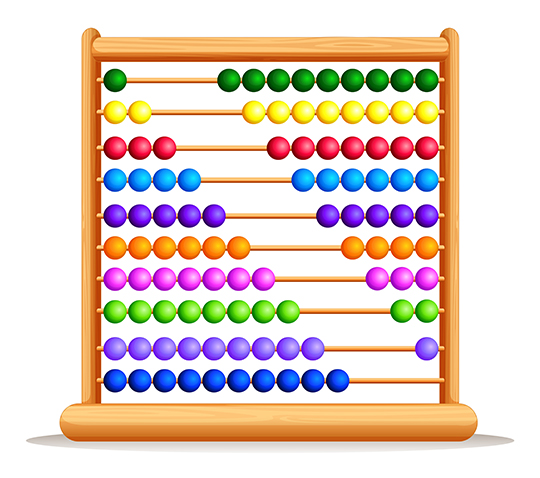 “Don’t worry, I have equal contempt for the Republican Party as well. These people are supposed to lead the country??????? Oyy!

The 5: Events became even more absurd since we last addressed the topic Friday.

In the opinion of an attorney for the Iowa Democratic Party, “The incorrect math on the Caucus Math Worksheets must not be changed to ensure the integrity of the process.”

For real. But yeah, don’t try this at home… 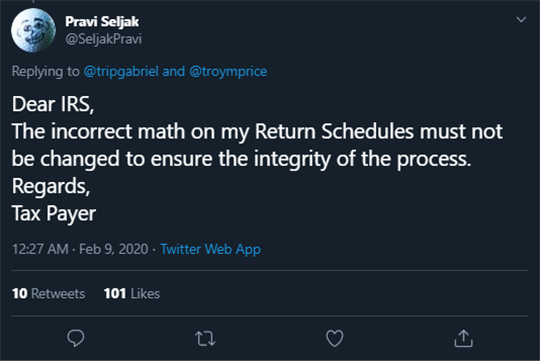 P.S. Jim Rickards is blowing the lid off one of Wall Street’s best-kept secrets.

And he’s doing so at considerable risk to his career.

Watch him here. Note that due to the controversial nature of the material he’s presenting, we’re taking it offline at midnight tonight.

After sinking below $50 a barrel yesterday, crude has recovered to $50.32.