Some days the connection is bogus: It’s correlation, not causation. But today, the connection seems pretty tight. The market’s down — thanks to the spike in this chart… 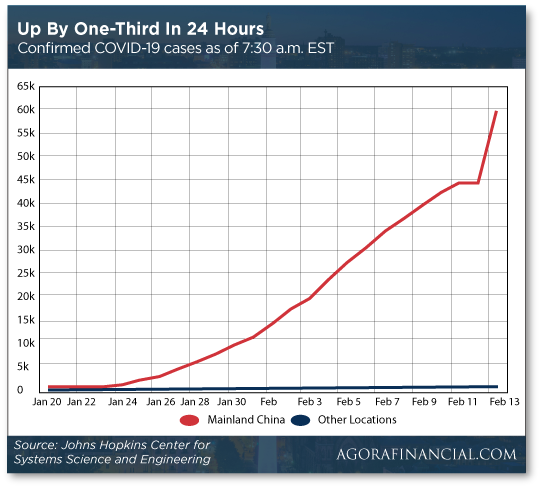 Shortly after dinnertime on the East Coast last night, the Chinese government’s official number of confirmed cases leaped from roughly 45,000 to roughly 60,000. That’s mostly because officials in Hubei province — ground zero for the outbreak — adjusted their criteria for a confirmed diagnosis.

And with that, Chinese leaders are no longer getting the benefit of the doubt from the Western establishment.

Here’s the Financial Times: “Health experts question the timeliness and accuracy of China’s official data, saying the testing system captured only a fraction of the cases in China’s hospitals, particularly those that are poorly run.”

The FT cites figures from Neil Ferguson, professor of epidemiology at Imperial College London — who says as few as 10% of cases are being properly detected.

And so the mainstream is catching up to our own Jim Rickards, who’s been following Ferguson’s research closely in recent days. It’s better, he says, than “the speculation and Chinese government coverups.”

But it’s worse than that. Even if you thought the official numbers seemed sketchy up to now, “at least we had what appeared to be a trend. We could observe the pattern to try and estimate the trajectory of outbreak. Now that’s gone too,” reports Stephen McDonell, the BBC’s man in China.

Really, what can you deduce from that chart now? Might as well consult a Magic 8-Ball for clues. 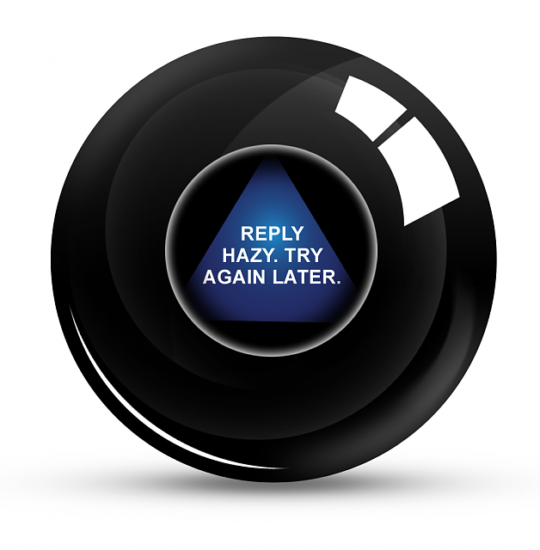 Then again, maybe not

The new numbers came out after word of a huge and tangible economic effect of the virus worries: One of the biggest annual trade shows in the world — the Mobile World Congress in Barcelona, Spain — has been canceled. Too many of the biggest exhibitors — Amazon, Facebook, Intel — had pulled out.

The prospect of virus-fueled economic gloom has dragged down the Dow from yesterday’s record heights.

At last check the Big Board has slipped more than half a percent to 29,388.

The major economic number of the day is the consumer price index — up 0.1% in January. Officially, the year-over-year inflation rate is 2.5%. 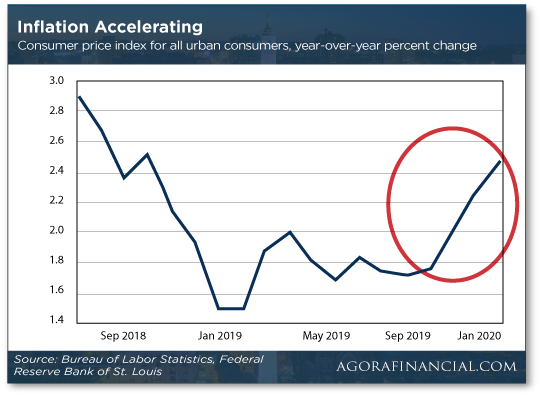 As always, any resemblance to your own cost of living is purely coincidental. The real-world inflation rate from Shadow Government Statistics clocks in at 10.3%. It too has been on the rise since autumn and now sits at a 15-month high.

China’s central bank has filed more than 80 patents as part of a push to create a digital currency — an important step on the road to “de-dollarization.”

A Washington-based outfit called the Chamber of Digital Commerce unearthed the documents; the Financial Times has reviewed them and concluded they’re legit. The patents “include proposals related to the issuance and supply of a central bank digital currency, a system for interbank settlements that uses the currency and the integration of digital currency wallets into existing retail bank accounts.”

Sounds fairly comprehensive. And make no mistake: It’s part of Beijing’s plan to get out from under the dollar’s thumb. “It doesn’t end the dollar overnight, but you’re beginning to build an alternative,” the Hudson Institute’s Tim Morrison tells the FT.

The Chinese aren’t the only ones pursuing a “CBDC” — or central bank digital currency. But their moves are worth watching closely because…

“In some ways, China is an ideal laboratory for the introduction of CBDC,” write Gal Luft and Anne Korin in their recent book De-Dollarization: The Revolt Against the Dollar and the Rise of a New Financial World Order.

“First, it is already a de facto cashless society. The largest bank note in circulation is 100 yuan (about $15), making big cash transactions cumbersome. While cash is not practical, credit cards have never become mainstream in the country. This is why China has become the leading society in mobile payments.”

In other words, it’s a relatively easy leap for what’s already a creep-tastic surveillance state. (Well, more so than the collect-it-all NSA, anyway. So far.)

Luft and Korin say Beijing has no use for cryptocurrencies like Bitcoin… but Chinese leaders are very keen on a digital currency that can be pegged to conventional currency, “or to traded commodities such as precious metals.”

The authors believe that’s what’s behind Beijing’s relentless gold accumulation for more than a decade now — a view that lines up with that of our own Jim Rickards.

Yes, the Federal Reserve is looking to play catch-up.

Fed Chairman Jerome Powell testified to Congress this week. And while the congresscritters had little interest in which Wall Street firms are benefiting from the Fed’s “repo rescue” (see yesterday’s 5)… they did ask what the Fed is doing to come up with its own CBDC.

Powell didn’t get into specifics, but he said the Fed has a “lot of projects” underway and would “keep the fire lit” in its pursuit of a digital currency.

With that, Bitcoin leaped past $10,000 on Tuesday for the first time since September.

But is that really cause for celebration? Already the IRS is cracking down hard on folks who’ve pocketed profits from bitcoin and other cryptos and don’t report it on their 1040. Meanwhile, cashless-society advocates like Harvard’s Ken Rogoff are urging the Fed to get on the digital-currency stick — both to compete with the Chinese and to make it ever easier for Washington to track your every transaction.

“Forced migration to blockchain dollars would cause Americans to move to gold and silver as a way to maintain freedom from 24/7 digital surveillance,” he says. One more reason to follow Jim’s long-standing guidance about keeping 10% of your portfolio in gold.

Bad news for U.S. makers of tech hardware: The Pentagon has backed down in an intra-deep state battle.

The battle goes back nearly a year, when the Commerce Department placed the Chinese tech giant Huawei on a blacklist of companies — making it harder for U.S. firms to sell Huawei their goods.

But there were loopholes to that blacklist — and Commerce was looking to tighten them. As we told you last month, however, the Defense Department objected. As the Pentagon saw it, the tech companies couldn’t afford to lose Huawei as a customer; the resulting loss of revenue would translate to less research-and-development money for tech goodies the Pentagon might want to buy in the future.

According to Politico, the Pentagon has now thrown in the towel — the decision coming from its No. 3 official, John Rood. (Rood’s background is with Lockheed Martin and Raytheon. Hmmm…)

The final rules will be hashed out during a meeting in two more weeks. But the outcome looks certain now. Not good for companies like Micron Technology, which counts on Huawei for 12% of its annual sales. (Oddly, shares of MU rallied this week despite the news. Seems Wall Street analysts are settling on a consensus that the market for memory chips is recovering.)

And now one of the stranger stories we’ve encountered in our years-long annals of legal cannabis: Medical marijuana businesses in Ohio will not be able to profit from the miserable performance of the state’s two NFL franchises.

As the regular season wound down last December, long-suffering Cleveland Browns and Cincinnati Bengals fans approached the Ohio State Medical Board with a petition: They wanted the board to classify watching their team flailing in mediocrity every Sunday as an affliction worthy of a medical marijuana prescription.

Yesterday, the word came down. Petition denied. Any legal way to alleviate the anguish chemically will still have to involve alcohol.

Cincinnati resident Vincent Morano, who was among the petitioners, says he’ll be patient. Asked by ESPN whether he’d rather have his proposal approved… or see his Bengals choose LSU quarterback Joe Burrow as the first pick in this year’s NFL draft… he was unequivocal.

“The other will come,” he said. “We’ve only got one shot at Burrow.”

To the mailbag and an occasional correspondent who describes having a “light bulb” moment.

“The purpose of the banking system is to be an inflation engine (right?) so that the government can spend tons of money to buy things at today’s prices and then inflate the currency and pay things at huge discounts to themselves.

“Do you think that maybe that has been part of the last inflation bubble objective?

“Inflate the debt so that now if the Chinese wanted to foreclose on us instead of them owning 44% of the country, now that the debt is $23 trillion and climbing, they only hold 10% or 15%

“If we (humans) are the apex predators on this planet, then the banking system is the apex parasite.”

We well remember a viral video from 10 years ago — the “Chinese Professor” commercial from Citizens Against Government Waste.

It was exceptionally well done. And its heart was in the right place. But we’re now halfway toward the commercial’s projected future in 2030. It hasn’t yet materialized, and the chances of it doing so are fading fast.

We don’t know about the historical numbers, but we do know this: The “public” portion of the national debt — the part that’s not IOUs to Social Security and Medicare — totals $17.3 trillion. China owns $1.1 trillion of that total, or around 6.4%.

But Beijing can’t just dump it all of a sudden. “If China did sell some of their Treasuries,” Jim Rickards said here in The 5 in 2018, “they would hurt themselves because any increase in interest rates would reduce the market value of what they have left.” In an extreme scenario, “We could simply freeze the Chinese bond accounts in place and that would be the end of that.”

The more plausible concern — and here we return to the De-Dollarization book by Luft and Korin — is that Beijing doesn’t “roll over” its bills, notes and bonds when they mature. That is, China doesn’t buy new Treasuries to replace the ones that reach their maturity date.

“What millions of Americans have not internalized yet is very clear to the technocrats in Beijing: Soon the United States will no longer be able to borrow so easily the amount of money it needs to finance its budgetary obligations. The interest payments would simply become prohibitive.”

Inflating the debt away? That’ll suck for us way more than the Chinese…

P.S. As we go to virtual press, the feds have slapped Huawei with racketeering charges.

And everyone thought the trade war/new Cold War was off. More tomorrow…