“Stock options are your doorway to an entire universe of moneymaking opportunities,” says Alan Knuckman, our CBOE veteran who’s traded options for over a quarter century.

“Options can insure your portfolio against losses… and preserve your ability to buy stocks at the best prices. 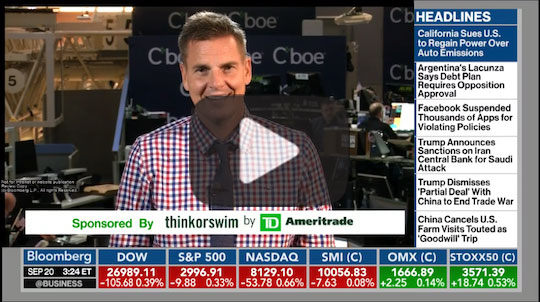 Alan’s been interviewed at Bloomberg, Fox Business, CNBC and more…

“And you can use the leverage that options give you to profit from rising stocks, falling stocks, volatile stocks and even sideways stocks,” Alan says.

[As for volatility, Dave mentioned yesterday that COVID-19 is the new trade war in terms of market volatility. The headlines recently have the markets either reacting to or shrugging off grim COVID-19 stats from China’s mainland — statistics we’re not even sure hold a lot of water.

One more thing to mention today. One MAGA stock — Microsoft — took a hit yesterday when a judge sided with another MAGA stock, Amazon, and pressed “pause” on the Pentagon’s JEDI cloud-computing contract. At issue: If the contract-granting process was biased against AWS. We’ll see how things play out as two tech giants collide in court.]

We give the floor back to Alan…

“I want to empower you with the understanding, know-how and instincts to trade on your own,” he says. And “options can be one of the most powerful tools in [your] kit.

“But before you can get there,” says Alan, “you need to understand a bit about how they work. So let’s start with one of the main underpinnings of the options market — the price.

That’s the beauty of options…

We mentioned Monday the strike price that “never changes during the life of the contract. So once you buy an option, you’ll always know exactly how much you’ll pay for a stock… or how much you’ll have a chance to sell it for,” says Alan.

Further, “put another way, each promise — or options contract — is priced based on the relationship between the strike price and the stock market price.”

Here’s how that works…

“If investors think a particular stock’s market price will move past an option’s strike price,” Alan says, “it is likely the option’s price will be high.”

Conversely: “If investors think the stock’s price is less likely to move past the option’s strike price, that option’s price will be lower.”

Going back to Alan’s example, say JNJ is trading at $131; the likelihood JNJ shares hike up to $145 in one day? Extremely low.

“However, if investors anticipated a sudden burst in JNJ stock, the option’s price would have started moving higher,” says Alan. “That’s because it would be more likely that an investor would have to fulfill that contract.”

Notice the prices at play in this example…

“The option’s strike price was $145,” says Alan, “the fixed price that you expected JNJ shares to reach. And the $0.01 was the price you would pay for that promise.

“Even a small move in JNJ… would cause the option’s price to rise. It would take just a blip to $0.02 to double your money. All because JNJ inched a little closer to the option’s $145 strike price.

“So when you look at an option, there are really two prices you need to consider — the option’s price itself and the price of the stock it covers,” Alan says. “Understanding that foundation is the key to… market defying strategies.”

On a practical note, here’s how you can use options to protect your wealth, bank enviable gains, generate income… and even profit from declining, volatile or range-bound stocks.

Back in late December, Alan launched a new research service and — in the roughly six weeks since — the returns his readers have locked in are staggering. Members of Alan’s Daily Double Club write in to report how it’s working…

To claim a spot, you must act TODAY because spaces are filling up on a first-come, first-served basis. Starting now.

To get the details, without risk or obligation, click right here.

The DOJ unsealed an indictment Thursday against Huawei, charging the Chinese telecom and electronics manufacturer with racketeering and conspiracy to steal trade secrets.

This is interesting: “The 16-count… indictment,” reports the Washington Examiner, charges “Huawei and its U.S.-based subsidiaries with conspiracy to violate the Racketeer Influenced and Corrupt Organizations Act, commonly known as RICO.” (Usually reserved for mobsters and the like.) The DOJ further alleges the company’s bypassed EU, U.N. and U.S. sanctions by doing business with Iran and North Korea.

Huawei defendants include CFO Wanzhou Meng — daughter of the company’s founder — who’s in Canada awaiting extradition to the U.S. after her arrest in December 2018.

The 5’s followed the Huawei story for several years now so an indictment comes as no surprise; we’ve even asserted the trade war — at its core — is really a technology war, an assertion that bears repeating. Particularly when FBI Director Christopher Wray says he has about 1,000 open investigations into Chinese technology firms.

“India’s Ruling Party Receives a Drubbing in Delhi,” says a headline at The Economist.

The BJP — Prime Minister Narendra Modi’s party — was triumphant in India’s capital territory less than nine months ago, but the tables turned dramatically Feb. 11 when the BJP won just eight of 70 seats in the territory’s assembly.

“There are two obvious explanations for the party’s slide,” the article continues. Two explanations we outlined in late January…

The Economist says: “Delhi’s 20 million people are less than 2% of India’s population,” so, “this drubbing may be dismissed as a small dent in the Modi juggernaut.” Or it might be representative of a new direction for the world’s largest democracy.

As always, we’ll keep you posted…

Last time The 5 checked on Theranos fraudster Elizabeth Holmes was May 2019 when we noted the unusually high number of CEOs ousted for ethical violations, according to an annual survey at PwC.

Technically, Holmes wasn’t fired in 2018; no, she stepped down after being indicted on federal wire fraud and conspiracy charges that carry a maximum 20-year prison sentence. 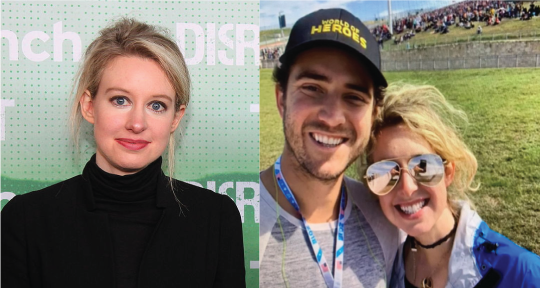 The case is scheduled to get underway this August in Northern California’s District Court. Unless the case is thrown out.

At least, that’s what Holmes’ defense team was hoping…

Holmes’ attorney Amy Saharia submitted: “The indictment is full of ambiguity and fudging language… so [prosecutors] can shift their theory as they go along in the trial.” (Is fudging a legal term?)

If we understand correctly, Holmes’ defense team claims prosecutors have so much evidence they can pivot in any direction to get a conviction. And there’s simply too much in the casefile — literally millions of pages — for Holmes’ lawyers to adequately defend against.

Late Tuesday, a federal judge thinned out some — not all — charges against Holmes.

The court ruled certain patients who’d used Theranos’ bogus services weren’t directly defrauded because they “were not deprived of any money or property,” Reuters says. Rather, insurance companies were on the hook. (Or taxpayers, right?)

So Holmes scored a partial victory, but the lion’s share of charges still stand. And the U.S. v. Elizabeth Holmes will proceed in August despite her team’s request for more time.

The 5 had to ask: Since Brexit became official on Jan. 31, what ever happened to “Brexit Boxes”?

The phenomenon — we first reported in the fall of 2018 — started with a few anxious Brits stashing away some of their favorite European goodies but then morphed into all-out “prepping” (not that there’s anything wrong with that… heh).

So when the sky didn’t fall last month and supply lines remained intact across the British Isles what happened to all those provisions, including British faves such as freeze-dried “chicken mince”? Whatever that is.

Well, three cheers for James Blake, the boss at Leeds-based company Emergency Food Storage UK. Business is epic, he reports, with sales up 1,200%.

"Whilst the Brexit panic meant we were selling out of 'Brexit Boxes,’” Mr. Blake says, “this coronavirus threat has seen us selling out of all of our food products four times in the last week.”

Business is so booming, in fact, that Blake’s company made £87,500 in less than a week — equivalent to what the company brings in per quarter.

Before we leave the topic, might we suggest a name change for “Brexit Boxes”? It’s sorta passé now.

Instead, how ‘bout Coronavirus Cache? Or the more up-to-date COVID-19 Crate? (Hmm… maybe we should trademark that one.)

It “deceives the public,” said an indignant state representative. *eye-roll*

Now Virginia’s protecting consumers from milk impostors (soy, almond, cashew, etc.) by defining the word milk for consumers. And just so you’re not snookered, here goes: The Virginia House approved a bill that defines milk as being "obtained by the complete milking of a healthy hooved animal."

And here we thought… 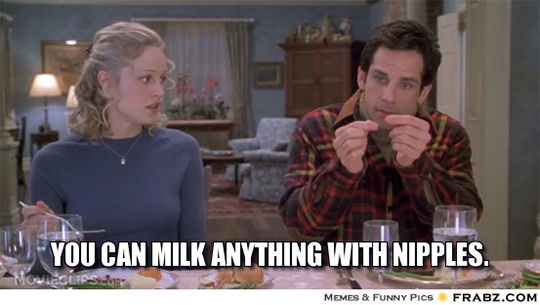 The more you know, kids.

The San Antonio Zoo has come up with a one-of-a-kind way to exact revenge on your ex this Valentine’s Day. Why not name a cockroach (or rat) after an old flame… 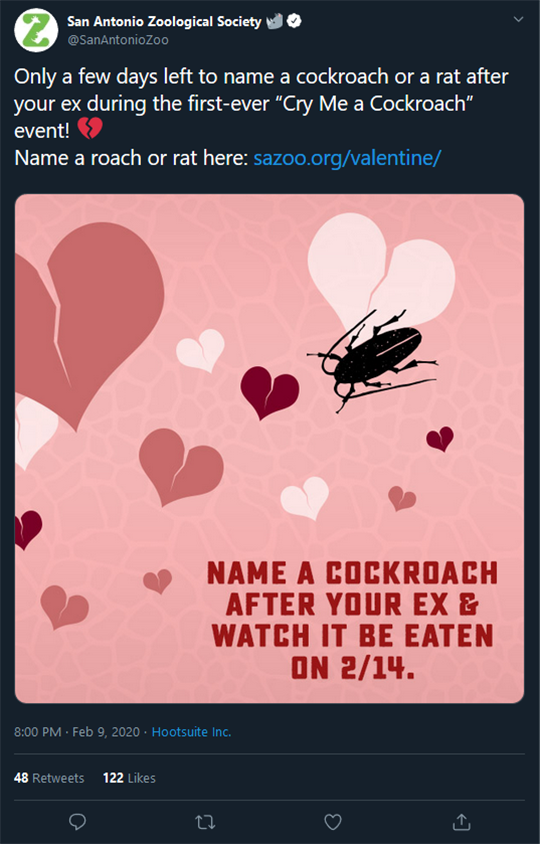 … and then watch — via livestream — as an animal eats it?

According to the zoo’s website, you can name a roach for $5 or a frozen rat for $25 (because revenge is a dish best served cold). And nothing says Valentine’s Day like *shudder* roaches and rats. They’re the new flowers and chocolates, right?

P.S. The 5’s off Monday for Presidents Day, but we’re back Tuesday…

In the meantime, become one of 200 new members to Alan Knuckman’s revolutionary Daily Double Club.

Take a step forward in your wealth, income and retirement with Alan’s on-fire research service… but the offer closes at MIDNIGHT.