Barely two months ago, Morgan Stanley kicked about 1,500 employees to the curb — more than 2% of the workforce, cashiered just before the holidays.

Here’s how CNN portrayed it at the time: “The flurry of pink slips comes as Wall Street firms face pressure to restrain spending to offset a challenging environment of low interest rates, slow economic growth and vanishing volatility in financial markets.”

Yeah, never mind: As we sit down to write this morning, Morgan Stanley just dropped $13 billion to buy E-Trade — the biggest takeover by a big bank since the Panic of 2008.

The spin from the financial media is all about MS trying to get a piece of the ultra-competitive discount brokerage business.

“A combined Morgan Stanley and E-Trade will instantly become one of the leading financial firms on both Wall Street and Main Street,” says CNN today. “E-Trade's more than 5.2 million mainstream investing clients and over $360 billion in assets will boost Morgan Stanley's wealth management unit, which tends to cater to more affluent customers. It currently has 3 million clients and $2.7 trillion in assets.”

All true. But supremely uninteresting from where we sit…

“The Fed’s repo funnel to Wall Street at work,” is the pithy assessment of our Nomi Prins on Twitter this morning.

Nomi is our resident veteran of the investment banking industry. Morgan Stanley is one of the few places not on her impressive CV.

For the last five months, the Federal Reserve has been shoring up the market in repurchase agreements or “repos” – short-term loans the Wall Street giants take out with each other to finance their daily trades.

When those firms suddenly pulled back on that lending, the Fed stepped in to do the lending. It’s also buying up Treasury bills from those companies.

At the risk of repeating ourselves, the Fed has been less than forthcoming about who needs the money or why.

But the cash infusion since September coincides almost perfectly with the stock market’s run-up to record highs. And now Morgan Stanley, after crying poor only a few weeks ago, can pull off a huge takeover. Go figure.

“As millions of Americans struggle to make ends meet,” says Nomi, “the stock market continues to transfer wealth to the 1% who are in on the game.”

And making ends meet will become much harder sometime during the next decade.

You won’t hear about it during the 2020 election cycle… but “the odds are excellent that the middle class will get hit by a value-added tax (VAT) in the next 10 years,” says Nomi.

In brief, a VAT is a consumption tax that’s piled on at every stage of production — from raw materials, to assembly, to the finished product landing on a store shelf. You ultimately pay the tax when you buy that finished product.

Of the 36 large and/or developed countries belonging to the Organization for Economic Cooperation and Development, only the United States lacks a VAT.

"If America wants to spend like Europe, and it does, America will have to tax like Europe,” write Brian Riedl of the conservative Manhattan Institute.

Nomi spells out what that means: “A lot more of the burden for government funding will be put on the working-class citizens.”

No, you won’t hear about it from any of the presidential candidates this year, including the incumbent.

“For most, the idea of a tax hike that would reduce take-home pay for the average family is not an option,” says Nomi. “And President Trump is proposing another tax cut if reelected.”

But unless Washington is suddenly overcome with a severe case of fiscal responsibility… a VAT might be the only way to pay for the spendthrift ways of both major political parties.

“And the sad part,” Nomi tells us, “is most of that increase will go into funding the health care and retirement benefits of the baby boomers if major changes aren’t made.

“The middle class is being targeted with more taxes because, as legendary robber Willie Sutton used to say about banks… that’s where the money is.”

No doubt. Between now and the time a VAT becomes reality in this country, you’ll want to take every step you can to cushion your savings and investments. As it happens, Nomi has a trading strategy to help you do just that.

It’s piled up a track record so good, some people don’t believe it’s real. You can judge for yourself when you follow this link.

For no obvious reason, the safety trade is in play today.

After the S&P 500 and the Nasdaq notched record closes yesterday, both indexes are sliding down today — as is the Dow. At last check the Dow has shed 244 points and is hovering just above 29,100.

Scared money is flooding into Treasuries and gold. With Treasury prices rising, yields are falling; the yield on a 10-year note rests at 1.51%, testing a low that’s held for nearly six months.

Gold, meanwhile is soaring to new seven-year highs at $1,620.

Oddly, the gloom that’s hit stocks today has not extended to crude; at last check a barrel of West Texas Intermediate is up 43 cents to $53.72. After bottoming below $50 a couple of times this month, oil is back where it was in late January — which doesn’t exactly square with “widespread coronavirus fears,” does it?

Neither does this: The “Philly Fed” survey of manufacturing in the mid-Atlantic just registered its strongest reading since May 2017. This report reinforces the one from Tuesday covering factory activity in New York state; if there are any worries about shortages of supplies from China, they’re not evident here.

Meanwhile, the Conference Board’s index of leading economic indicators rings in much better than expected — up 0.8% in January. Nearly everything looks positive: Unemployment claims are down, while factory activity, building permits and consumer expectations are up.

“Although space hasn’t really been a final frontier for startup investment, we’ve entered a new orbit and the profit potential is piling up,” reports Ray Blanco on the science-and-wealth beat.

“Space startups received a record $3.2 billion in investments in 2018, higher than any year on record, according to space analytics firm Bryce Space and Technology. 2019’s numbers might easily top 2018’s. In December, Morgan Stanley had its second-annual space summit. The event ran out of room.”

Ray recently had the foresight to get his Technology Profits Confidential readers in on Virgin Galactic (SPCE) — the only “pure play” in space tourism. Result — a 104% gain in just weeks.

“Musk’s rocket company SpaceX has already placed 240 satellites into low Earth orbit,” says Ray, “and early versions of these birds have been able to communicate with U.S. military aircraft at speeds of 610 megabits per second.”

And while Amazon hasn’t launched its own satellites yet, “The company is working with other providers that have placed satellites in orbit. Amazon teamed up with Iridium Communications to offer AWS cloud services from space via Iridium’s next-generation constellation.”

The book is closed on a giant-coin caper going back nearly three years.

In March 2017, we took note when a ginormous gold version of a Canadian Maple Leaf was stolen from the Bode Museum in Berlin. An impressive feat considering the coin weighed 220 pounds, was worth $4.05 million, and its purity was such that it made the Guinness book of records.

Turns out it was an inside job. A museum employee teamed up with two childhood friends to pull it off — hauling the coin away in a wheelbarrow.

The three have now been sentenced to prison terms as high as 4 and a half years. A fourth suspect was acquitted.

Here’s a twist to the viral story about Facebook’s Mark Zuckerberg getting his armpits blow-dried.

Oh, you missed it? According to a new book by Wired writer Steven Levy, Zuck is still a nervous public speaker after all these years — so much so that he has people, yes, blow-dry his sweaty pits before he takes the stage for a big speech. 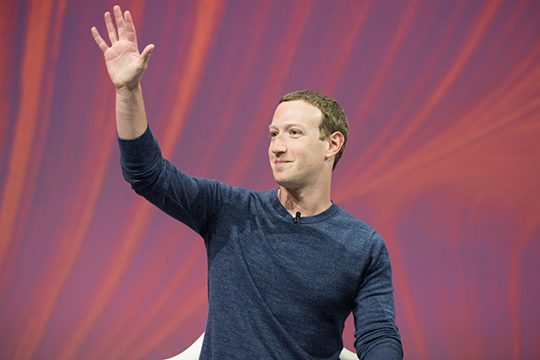 But you can read about that anywhere. What we’re wondering is whether those people are running afoul of pesky occupational-licensing laws.

“Unless the Facebook CEO has licensed cosmetologists on his communications team, he may be breaking the law,” writes Shoshana Weissmann at the Washington Examiner. “Yes, seriously.”

According to the Goldwater Institute, every state except Virginia and Arizona requires that anyone blow-drying hair professionally have a cosmetology license. (We chronicled the repeal of Arizona’s blow-dry law earlier this year.) Depending on the state, penalties can run as high as six months in jail and a $2,000 fine.

Also depending on the state, Zuck’s circumstances fall under the statute — including in Facebook’s home base.

“In California, state law does not appear to limit the definition of ‘hair’ to the head,” writes Weissmann — “in fact, like many state cosmetology laws, it includes treatment of body hair. By the letter of the law, then, an employee blow-drying Zuckerberg’s armpits (if hairy) without a license is committing a crime punishable in California as a misdemeanor, which carries a fine of $1,000…

“Zuckerberg and his employees probably won’t be punished for this ‘crime,’ nor should they be. Yet until lawmakers take action, regular people simply trying to make a living by blow-drying and styling hair will continue to bear the brunt of these ridiculous regulations.”

P.S. Tax season is in full swing. But before you file, you’ll want to check out an obscure loophole that could mean an extra $625 in your pocket every month.

What would you do with an extra $625 each month?

Think about that for just a moment… then follow this link.