Scary stuff, right? After all, 1929 was the prelude to the Great Depression. And 2000 was when the dot-com bubble burst — slashing the retirement accounts of many Americans in half. More if they’d piled into tech stocks.

Time to bail, right? Or at least trim your stock positions?

OK, that headline from Fortune is nearly seven months old.

The article accompanying that headline was published in late July — three days after the S&P 500 notched a record close of 3,026.

For a while, the article looked almost clairvoyant. The stock market spent the following two months grinding sideways. 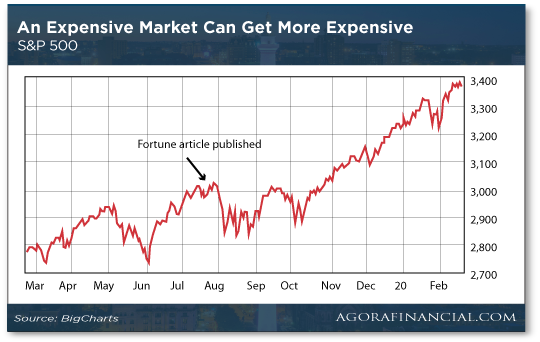 That “expensive” stock market got still more expensive. Even after a drop yesterday and today, the S&P is 10.8% higher than it was at the time of that article.

So how about now? Surely it’s time to bail, right?

Let’s back up a moment and talk about what makes a stock or an index “expensive” in the first place.

It comes back to the price-earnings ratio. “It simply tells us how much investors must pay for every dollar a company earns,” explains our income specialist Zach Scheidt — who definitely does not like overpaying for a stock. He’s one of the most value-minded guys we’ve ever met.

Here’s the thing. Whether a stock is expensive or cheap is a surprisingly relative thing. There are many ways to measure it — especially when you’re trying to talk about “the stock market” as a whole.

“What you can't see at face value,” he explains, “is that there have been plenty of times in the market's history when stocks have been much more expensive than they are today. In fact, over the last 10 years, stocks have been relatively cheap compared with other times in history because of the exceptional amount of worry the media have been feeding investors.

“Also, keep in mind that many of the biggest stocks in the market are also the most expensive,” Zach cautions

“Big, expensive stocks like these skew the averages and make it look like stocks are more expensive than they really are. But if you were to take out the biggest, most expensive growth stocks and look at the rest of the market, you'd find that most stocks really aren't as overpriced as the media would have you believe.”

But what about a recession? Aren’t we overdue?

To be sure, a recession would pull the market down — although even there our perceptions are colored by the events of 2000 and 2008. Not every recession cuts the stock market in half. The 1990–91 recession pulled the market down 20%, and then the market resumed an epic years-long rally.

In the first place — to reinforce something we said now and then last year — none of the hallmarks preceding a recession is present. Inflation is only now beginning to accelerate (and it might not last). Oil prices haven’t made a huge jump. And there’s no manic euphoria we can see — no asset class about which the masses have deluded themselves into believing it “only goes up.” (Think housing in 2005 or dot-com stocks in 1999.)

“There is no specific time frame in which a recession or a bear market must occur,” Zach says, at the risk of belaboring the obvious.

“Yes, human nature naturally causes excesses in the market and subsequent pullbacks. But just because we haven't had a pullback in some time doesn't necessarily mean that we should expect one right away.”

What’s more, “We actually did have a major pullback just over a year ago. You probably remember the tantrum pitched by investors when the Fed started raising interest rates, and the market traded several percentage points lower in December 2018.”

In fact, that pullback was more or less on the same 20% scale as the one accompanying the 1990–91 recession. It’s not outrageous to think January 2019 marked the start of a new bull market.

But we’re getting ahead of ourselves. More about that next week…

[Ed. note: In recent weeks, Zach has been streamlining his most aggressive and lucrative trading strategies — honing them down to a technique that’s already proven to be tops in a recent audit of nearly 50 investment research services.

You can see the results of this audit at this link — and then learn how a few simple steps could make 2020 your best year ever.]

Turns out it’s the services sector in the United States that’s taking a bigger hit from the coronavirus outbreak — not manufacturing.

At least that’s our takeaway from the big economic number of the day — the “flash PMI.” This is the midmonth purchasing managers’ index from IHS Markit. Economists and traders have attached more and more significance to this number in recent years.

As with similar indicators, 50 is the dividing line between expansion and contraction. For February, the composite number tumbled nearly three points to 49.6. It’s the first sub-50 reading since 2013. (Which we’ll point out was a year in which the stock market leaped nearly 30%. Just sayin’!)

Within the survey we see manufacturing at 50.8 — down a bit from January, but still above 50. But services crashed nearly four points to 49.4. Survey respondents say their customers are hesitating to place orders, more than at any time in the 10-year history of the survey.

➢ One other economic number of note today: Existing home sales for January clocked in as expected, falling 1.3% month over month, but still up 9.6% year over year.

And with that, it’s a risk-off day on Wall Street.

For all the concerns we raised about the coronavirus’ impact on companies’ bottom lines this week… the stock sell-off yesterday and today has the feel of something that would be happening regardless of the headlines. Really, take another gander at that chart above. If it weren’t the virus, the media would be coming up with some other excuse.

➢ About gold: There’s definitely a too-far-too-fast vibe right now — up $80 in just the last two weeks. But if these heady levels hold by the time the market closes today? Chart watchers will tell you a weekly close at these levels bodes very well for the coming weeks and months…

As gold gets more expensive, Russia’s relentless accumulation is slowing down.

Yesterday being the 20th of the month, the Russian central bank issued its monthly report on its gold holdings. The central bank added 6.22 metric tons of the Midas metal during January. Definitely the Russians continue stacking… but at a less furious pace in recent months. 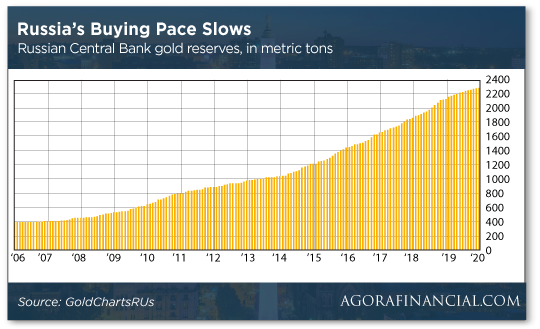 Still, the total is now 2,267.8 metric tons. As Jim Rickards regularly points out here, Russia has the biggest gold stash in the world as a percentage of its economy — by far.

With prices rising, the Russians can feel comfortable easing up on their accumulation — knowing they’re in outstanding shape to take part in an “axis of gold” along with China, Iran and Turkey.

There’s no financial angle to this story — not yet, anyway — but since Big Media are ignoring it, we figure we should bring it to your attention.

On the surface, it seems as if the horrendous multisided civil war in Syria is winding down after nine years. The Syrian government army, with Russian help, is launching an offensive to retake Idlib province — the last stronghold of hard-core Sunni Muslim jihadis.

But the jihadis have long been backed by Turkey, the country to Syria’s north — and Turkey’s leader Recep Tayyip Erdoğan has sent his army into Syria. In skirmishes during just the last 24 hours, Turkish forces claim to have killed 50 Syrian troops. Russia has sent in planes to try to ward off the Turks.

As you likely know, Turkey is a NATO ally of Washington’s. “The prospect of a NATO intervention in Syria has exposed fault lines between the State Department and the Defense Department over the U.S. mission in Syria,” writes Matthew Petti at The National Interest.

The State Department is gung-ho to back the Turks. “We… fully support Turkey’s justified self-defense actions,” said Secretary of State Mike Pompeo after an earlier skirmish this month. As Pompeo sees it, anything that can hurt the Syrian government will ultimately hurt Syria’s ally Iran — and hurting Iran is the Trump administration’s No. 1 foreign policy priority.

But the Pentagon would just as soon stay focused on routing out the remnants of ISIS in Syria — and not get stuck between Turkey and Russia. “The Coalition’s goal is to de-escalate any unplanned encounters with other forces operating in northeastern Syria,” says U.S. spokesman Col. Myles Caggins.

Maybe this situation will calm down in a few more days — it did in late 2015 after a Turkish F-16 shot down a Russian attack aircraft — but in case it doesn’t, you (likely) read it here first.

And with that, we aim at a little comic relief before winding down for the weekend…

One typo… one missing letter… and one huge embarrassment for the British discount airline easyJet.

But someone neglected to include the “s” in “choices” and… well, we’ll let The Sun tabloid take it from there…

But really, who clicks on those privacy policies anyway? Uhh… an easyJet customer named Nick Matulovich, that’s who. 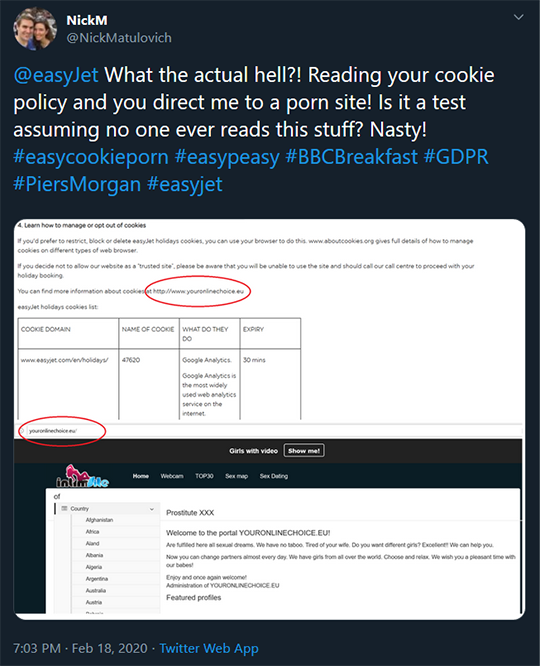 EasyJet issued the expected apology and fixed the link. Matulovich wasn’t quite as outraged as his original tweet suggested. “All good, glad I could help. Do I get a prize for spotting it?”

Presumably yes. “Hi Nick, we will get someone to look into this straight away” came the reply.

P.S. One minute in the morning is all it takes… to potentially double your money.

That’s what we’re seeing in the early returns from one of our newest trading services.

You see, there’s a little-known pattern in the price action of certain stocks. Pounce on this pattern and you can earn returns unlike anything you’ve experienced before.

Curious? Learn how it all works when you follow this link.