“It is past time to say ‘pandemic’” when discussing the coronavirus outbreak — according to Jody Lanard and Peter Sandman.

Lanard and Sandman are not medical experts. Rather, they are “risk communication” consultants. Governments and corporations pay them big bucks to help figure out public relations when bad news looms. They wrote an entire pandemic playbook in 2007 during an outbreak of H5N1 flu.

As far as the World Health Organization is concerned, what’s happening now is not a pandemic — that is, a situation in which an infectious disease spreads easily from person to person in several parts of the world.

From the WHO’s standpoint, governments have acted swiftly: “If countries took no measures at all, we would have seen way, way, way more cases,” spokeswoman Margaret Harris tells the BBC. “That’s what we mean by containment.”

Too late, write Lanard and Sandman in an illuminating post yesterday. “For weeks we have been trying to get officials to talk early about the main goal of containment: to slow the spread of the virus, not to stop it.

“And to explain that containment efforts would eventually end. And to help people learn about ‘after containment.’”

In other words, at some point, the virus will no longer be contained. Then what?

We’ll come back to that later. The point right now, say Lanard and Sandman: “This risk communication has not happened yet in most places.”

Which goes a long way to explain why global stock markets are falling out of bed today.

That is, it’s not just the headlines that broke over the weekend…

Rather, it’s the fact that it looks, smells and feels like a pandemic… but the people who are supposed to have a handle on this stuff seem to be in denial.

That, as much as anything, is the reason stocks are — well, let’s survey the damage moving east to west…

Hmmm… Over the weekend, the legendary chart-watcher Ralph Acampora was interviewed on the Financial Sense podcast. He said he was not concerned about coronavirus or anything else — as long as the Dow held above its most recent closing low notched on Jan. 31. That was 28,256.

As we write, the Big Board trades more than 150 points below that level… 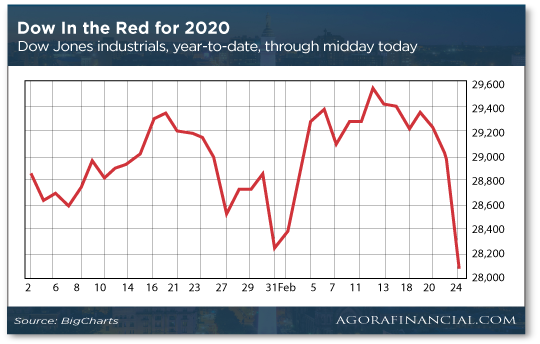 Crude prices are likewise hurting — down more than 4.5% as we check our screens, a barrel of West Texas Intermediate back below $51.

If that level holds by today’s close, it will be a milestone — at least here at The 5 if nowhere else. It was seven years ago this month, February 2013, that gold cracked below $1,650 — a move that prompted our resident chart hound Greg Guenthner to declare gold in a bear market.

Some of our gold bug readers still haven’t forgiven him, we suspect — but the call was prescient. The Midas metal slid all the way to $1,050 in late 2015.

Our macro maven Jim Rickards called the bottom at the time, although even he didn’t think his timing would be that precise. Hold on for the long term, he says now; if gold follows the pattern of its bull markets from 1971–1980 and 1999–2011… gold could ultimately peak at $14,000.

Also benefiting from the safety trade today are U.S. Treasuries — prices are up, yields are down. As we write the yield on a 10-year note is 1.374%. If that level holds by the close, it will break the previous record — by a hair — set in the summer of 2016.

Let’s come back to what “after containment” is supposed to look like.

As Lanard and Sandman see it, using the word “pandemic” would help set realistic public expectations.

Yeah, you haven’t heard about any of that, have you?

On a practical level, Lanard and Sandman advise getting an extra couple months’ supply of prescription medicines and gradually stocking up on nonperishable food — enough for “several weeks of social distancing at home during an intense wave of transmission in [your] community.”

And one bit of less intuitive advice: “Right now, today, start practicing not touching your face when you are out and about! You probably won’t be able to do it perfectly, but you can greatly reduce the frequency of potential self-inoculation… Someone should develop a face-touching app – instead of a step-counting app to encourage you to walk more, how about an app to encourage you to auto-inoculate less!”

“Take a deep breath,” says our income maven Zach Scheidt — getting back to the investment implications of this sell-off.

“Take a look at your investment account and circle the stocks that you hold as long-term positions.

“I’m talking about the stocks that you own because you believe in the business and because you expect to receive dividend payments for years to come.

“These stocks are not only great cash-generators, but they also typically hold up better than some of the more speculative stocks in the market. So rather than selling these reliable companies, I’d be considering buying more, and taking advantage of discount prices.”

We’ll illustrate Zach’s point with a case we mentioned last year — Coca-Cola during the 2007–09 financial crisis.

The share price recovered to its late 2007 levels by autumn 2010… by which time the dividend was up to 66 cents.

So while the share price basically went nowhere for three years, the payout on shares bought at the beginning of that three-year span had grown 38%. How many jobs deliver 38% in pay increases over three years?

If you added to that KO position anytime during the crisis, scooping up shares at a discount, you’d be sitting even prettier.

“On the other hand,” says Zach, “you may have some more ‘speculative’ or ‘trading’ positions in your account.

“If you’re holding positions with very big gains in these areas, I think it makes sense to take some profits off the table right now. Depending on how much risk you want to take out of the market, you could consider selling a third to maybe half of your shares.

“After all, these are the names that are likely to take the biggest hits if the market continues to trade lower on coronavirus fears.

“By taking some profits off the table, you’ll not only be protecting your wealth. You’ll also be giving yourself extra cash to buy new investments at a discount once the market stabilizes!”

As it turns out, artificial intelligence was well ahead of the “experts” in identifying the coronavirus outbreak.

“It wasn’t until Jan. 7 that the CDC began to separately track the spread of the illness,” says our tech-and-biotech whiz Ray Blanco. “The World Health Organization didn’t make its first official statement until two days later, on Jan. 9.

“But more than a week before the first recognition of COVID-19 by health officials, customers of a small venture-backed Canadian technology company had received word of an outbreak spreading in Wuhan and surrounding Hubei province. The company, BlueDot, has built an AI-driven analytics platform to track and anticipate infectious disease risks.”

As a recent story in Wired explains, “BlueDot uses an AI-driven algorithm that scours foreign-language news reports, animal and plant disease networks and official proclamations to give its clients advance warning to avoid danger zones like Wuhan.”

In other words, AI could detect a reality that Chinese officials were denying.

This is the true power of AI. As both Ray and our resident futurist George Gilder are fond of saying, AI does not mean armies of robots putting hundreds of millions out of work forever. Instead, “when it comes to processing data,” says Ray, “AI stands far above what people are capable of.”

Oddly, the casinos in Macau are open again.

Twenty days ago, we noted how the Chinese authorities shut them down — all 41 of them. That’s a big deal considering how Macau’s gaming industry is seven times the size of Las Vegas’.

The casinos reopened last Thursday. But it’s not business as usual, advises our Nomi Prins. “For one thing, casino visitors will need to wear a face mask and have their temperature checked upon entering the premises.

“Other restrictions, aimed at preventing any possible new spread of the coronavirus among people at the tables, include a limit on the number of gaming tables that can be opened on any one casino floor. In addition, guests will need to keep one empty seat between one another at any of the gambling tables.

“What that means is that only three players at a maximum can sit at any seven-seat table at a time. Casino visitors will also not be allowed to stand near any table to play, a normal and common occurrence in healthier times.”

“That will no doubt keep a lid on casinos’ abilities to make back some of their losses in the near term and will also hamper gains until the coronavirus is truly out of the way,” says Nomi.

All the major U.S. operators have a presence in Macau. Nomi’s shorting one of them in her Dark Money Millionaires trading service. Certainly none of them is a buy at the moment…

Gee, we didn’t plan an all-coronavirus episode of The 5 today. How can we end it on a lighter note?

Why, we end where we began — with the reassurances/denials of the World Health Organization. Some wag on Reddit put together this “bingo card” for everyone’s grim amusement while watching the latest WHO briefing on live TV… 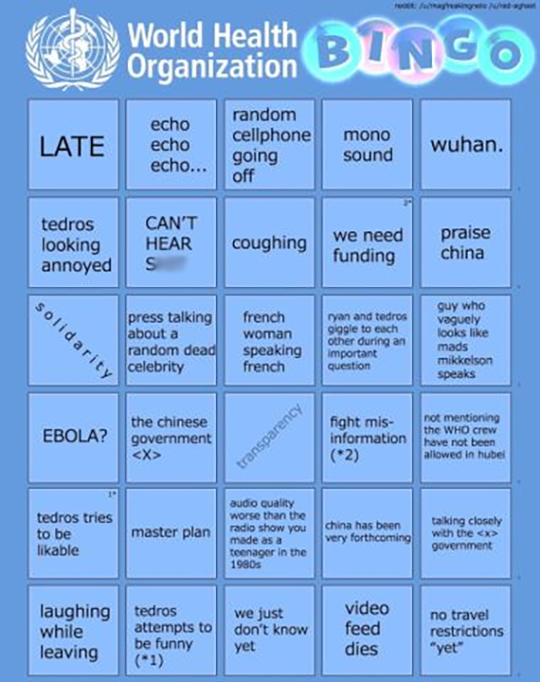 P.S. As we send today’s 5 off for copy editing, the Dow is down a clean 1,000 points. We’ll follow up as needed tomorrow…