“Very Much Under Control”

“Black Swan… or just an ugly gray pigeon that might soon fly away?” says one of our devoted readers, apropos of the steep market sell-off yesterday… and today.

Our reader continues: “I couldn’t help think of Jim Rickards when he said years ago certain events might create financial shock waves felt around the world (i.e., a Black Swan event).

“The ripple effect of the coronavirus is spilling over into so many different businesses, from restaurants to automotive assembly plants to the garment industry.”

[To that last point, the American Bridal and Prom Industry Association says 80% of the world’s wedding and prom dresses are produced in China. With numerous factories shut down in China, we’re thinking there are going to be plenty of crestfallen bridezillas — and promzillas? — this spring. My daughter might be one of them… as it’s her senior year of high school.]

Back to our reader’s question at the top, we’re no soothsayers… but apparently the president’s been gazing into a crystal ball. This via Twitter… 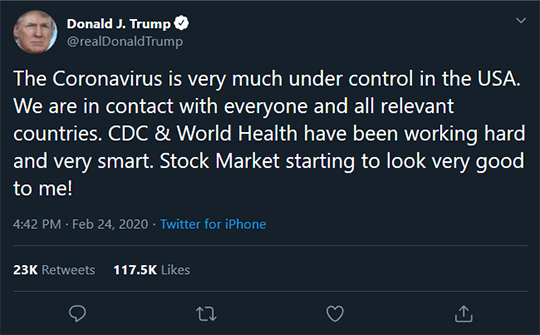 Heh… if you read yesterday’s installment of The 5… B-I-N-G-O!

What we do know, however — the market’s a fickle mistress; to wit, here’s some advice for handling whiplash highs and lows…

“The biggest rule in trading is this: Markets can always go a lot higher than you think and a lot lower than you think,” says our eyes and ears at the CBOE, Alan Knuckman.

With COVID-19 *this* close to being declared a pandemic and the Dow careening 1,000 points yesterday, we’d call this timely. 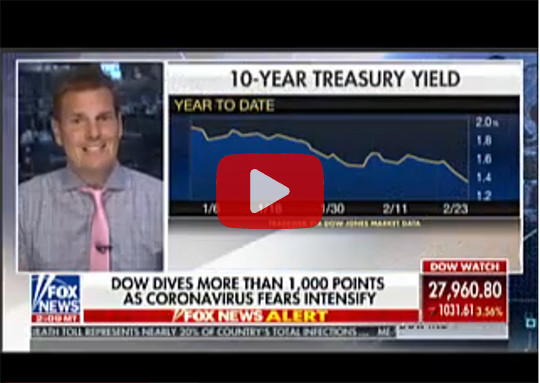 Alan warns: “Novice traders — and even a lot of veteran traders who should know better — often make the mistake of trying to anticipate the turn. They think they can ‘call the bottom’ or ‘call the top.’

“How many times over the past several years have you heard that stocks are massively overpriced by historical standards,” he continues, “that they just couldn’t go any higher?

“There have been people talking about the top in the market since 2009,” Alan notes. “And it’s essentially gone straight up with only a few hiccups, which are perfectly normal and healthy.” Umm… the last two days would most certainly qualify as hiccups…

But “think of how much opportunity you would have missed out on if you followed this doomsday narrative for the past several years,” he says.

We take a gander at the DJIA since the index took such a dramatic turn yesterday with its headline-making, round-number drop… 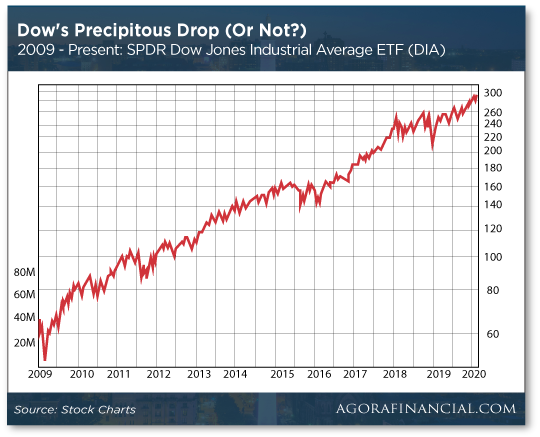 So to Alan’s point, investors would have missed out on about 70% returns since the first day of trading in 2009 till now — that’s a life-altering sum…

“As a professional trader, it’s not my job to predict the market top or what will bring this bull market down. It’s a waste of time to try,” says Alan.

Nor does he bother trying to explain why the market has ramped up so incredibly over the last 11 years. “I can’t disagree that stocks are extremely expensive by certain metrics,” Alan says. “But they’ve been overpriced by those same metrics for a long time now.” And have — mostly — continued up and up…

“You can say it’s because of the Fed’s cheap money,” he continues. “I’m not arguing that it’s necessarily a good idea. But there’s a reason why they say you can’t fight the Fed.

Alan says: “Most folks seem to think it’s too late to invest in the stock market, that the run is over.” A crash is imminent? The bubble’s ready to burst?

“If you’ve been sitting on the sidelines of this historic market rally, I am urging you to pay close attention to what I say next… Based on stock market history of the past century, this raging bull market has a long way to run,” he says.

Alan notes the following — ripped from the pages of history:

“In other words,” Alan says, “this market is nowhere near its maximum potential. And with history as our guide, we’ve got at least three more years of a freight train rally.

“My research leads me to believe that we’re about to enter the most profitable window in stock market history,” Alan says.

And history shows some of the biggest gains are made during the final “melt-up” phase… OR what we at The 5 like to call the late stage of the boom-bust economic cycle.

Alan says: “Will the market keep going straight up? No way… One day it will end.” But it won’t happen overnight. Here’s what Alan has to say about that…

“People ask me all the time when they’ll know the market’s getting ready to roll over. And to me, the answer isn’t terribly complicated…

Alan says it’ll take a month of the S&P 500 closing below its 200-day MA before he calls curtains. “But that’s not close to happening, and we’ll have plenty of time to see it coming,” he says.

“A downturn won’t just sneak up on us,” Alan concludes. “Professional traders don’t waste time sitting around and guessing. They wait patiently for a change in the trend and then act appropriately.

“That’s exactly what I plan to do.”

In recent back-testing, Alan’s system went 58-0 with 19 quadruple-digit winning trade scenarios up to an exceptional 4,760% upside.

At least in the short term, Jim Rickards agrees with Alan’s takeaway: “There is almost zero risk of a recession in the next three months and less than a 20% chance of a recession before November,” he says.

“That’s good news for Trump because a recession (or lack of one) is the single strongest indicator of whether an incumbent president will be reelected,” says Jim. “Trump should have a 90% chance of winning by Election Day absent extreme and unexpected economic shocks in the next nine months.

“Trump’s chances are also helped by the weakness of his opponents,” Jim points out. (Stay tuned for more on this at The 5 in coming days, including the outcome of the Nevada caucuses.)

According to Jim, here’s a rundown of Dem candidates’ shortcomings:

That’s about the size of it…

Jim says the Fed will further solidify Trump’s reelection chances with a rate cut in June… also expanding gold’s price in 2020. “This comes on top of continued strong [gold] buying from Russia, China and Iran,” says Jim, “and flat output by miners.”

Of course, niggling geopolitical concerns play their part in gold’s price, with countries and investors making a “flight to quality.” Not to mention: “The coronavirus has been a major factor that has taken gold past $1,600 an ounce,” says Jim. “The next crisis will send gold even further.”

Not that there won’t be bumps along the way…

Shortly after we went to virtual press yesterday, gold got kneecapped in electronic trading on the Comex…

And it’s another record low for the 10-year T-note with a 1.32% yield; the previous record low came after the shock of the Brexit referendum in 2016.

Speaking of 2016, we follow up on a story about beer, cash apps… and humorless feds.

Four years ago, we told you the story of New Yorker Ben Guarino who tried to pay back his buddy for a bar tab using the Venmo app. Jokester that he is, Mr. Guarino wrote “ISIS beer funds!!!” in the memo line. 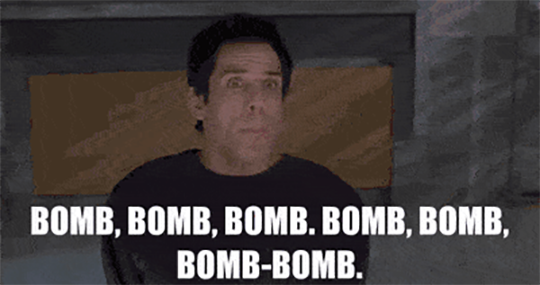 The upshot? The feds flagged Guarino’s payment, and it bounced back to his account. (And let’s be honest, Mr. Guarino probably landed on some federal watchlist too.)

Here’s how it works…

“PayPal, along with its subsidiary Venmo, uses a system that automatically flags keywords in the payment memo field that could indicate a violation of U.S. sanctions,” says an article at Slate.

“So if, say, you try to send a friend money for ‘drinks at Cuba Libre,’ you’ll quickly learn how dense PayPal’s system can be when it comes to context clues.”

Other words in the memo line that’ll get you flagged? Iran, Syria, Kim Jong Un, Sinaloa Cartel and Cubano sandwich (really?)… among others.

But Slate’s Aaron Mak sent multiple 1-cent payments to his editor to see which words would pass muster with the feds.

You might be surprised to learn you can pay for a hitman and safely order heroin or anthrax (heh… pick your poison) for the Hezbollah. (Well, not really, but you get the point.)

Yes, even the word bomb makes the cut.

“In fairness, it’s unlikely that someone actually in the market to blow something up would write bomb in the payment description,” Mak says, “but then again, a person trying to send funds to the Islamic State isn’t likely to attach the flagged term ‘ISIS’ to their donation either.”

P.S. The CDC formally says it’s time for businesses, hospitals, communities, schools and individuals to begin preparing to respond to coronavirus. So there’s that.

Got your bingo card out?

A little gallows humor… not that you shouldn’t take the CDC’s advice to heart.

And to prepare your portfolio, take a look at what Alan Knuckman says right here…