You know this coronavirus thing is serious when one of the world’s biggest booze-makers just lowered its profit forecast.

Sure, it’s easy to dump shares of airlines, cruise operators and makers of luxury goods under the circumstances.

But get this: Bars and restaurants in China “have largely been closed and there has been a substantial reduction in banqueting,” says a statement from the British giant Diageo, producer of Guinness, Smirnoff, Johnnie Walker and Tanqueray. “We have seen significant disruption since the end of January which we expect to last at least into March.”

And so the company reckons sales this year will come in $260 million less than previously forecast. Diageo trades in New York under the ticker DEO, and it’s down more than 1% as we write.

But for the broader stock market, the freakout is over. For now, anyway.

As we write, the major U.S. indexes are all in the green, if not by much. The S&P 500 rests at 3,142. That’s up nearly half a percent and still nearly 100 points above the 200-day moving average that our floor-trading veteran Alan Knuckman said yesterday is a line in the sand.

As sickening as the drop was yesterday and the day before, the S&P remains at its levels right after last Thanksgiving — when everyone was thrilled about “new all-time highs.”

Still, yesterday’s action is worth revisiting for a possible glimpse at where events go from here.

The market was already sliding when around lunchtime the U.S. Centers for Disease Control and Prevention held a conference call with reporters.

The recommendations from Dr. Nancy Messonnier lined up very much with the messaging urged by the “risk management” consultants we cited here on Monday.

Messonnier and the CDC openly contemplated the P word — “pandemic.” And they dispensed with any talk of the C word — “containment.”

Schools might have to close and resort to “internet-based teleschooling,” she said. “Businesses can replace in-person meetings with video or telephone conferences and increase teleworking options.” Cities might have to “modify, postpone or cancel mass gatherings.”

[Ed. note: Should our own team need to resort to working from home… rest assured we’re battle-tested and prepared to continue bringing you your paid publications, as well as the free e-letters like this one. Our Baltimore-based management and support staff can pivot to a decentralized system that’s already proven resilient through hurricanes, blizzards and riots.]

If the sell-off Monday and early yesterday was all about “Hey, the authorities aren’t being straight with us”… the turn toward transparency did not help. The sell-off accelerated.

And then National Economic Council Director Larry Kudlow opened his yap — desperately trying to arrest the rout by invoking the C word. 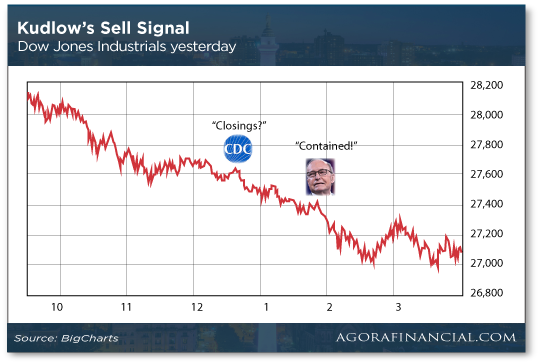 It wasn’t just the contradictory messaging from different arms of the Trump administration.

No, surely a few wise traders had the same 2008 flashbacks we were experiencing here at The 5.

For one thing there was Fed Chairman Ben Bernanke using the very same C word to describe the troubles with subprime mortgages. For another thing, Kudlow’s assurances smacked of Treasury Secretary Hank Paulson announcing one or another measure to stem the panic — every week! — only to make matters worse.

Oh, and Kudlow has his own string of hits from that era. “The recession debate is over. It’s not gonna happen… The Bush boom is alive and well,” he said in December 2007 — the very month the recession began. He also called a bottom in the housing market in July 2008; he was off by only 3 and a half years.

As we understand it, the president — just back from India — will hold a news conference alongside CDC officials later today.

Right now it’s scheduled for 6:00 p.m. EST — well after the market has closed. Can’t be too careful, huh?

Gold has shown both sides of its safe-haven role in the last 72 hours of coronavirus alarm.

With the open of trading Sunday night, gold raced to a seven-year high of $1,685 and held onto that high through Monday afternoon. As we check our screens this morning, it’s back to $1,635.

Disappointing, yes, but still higher than it was only a week ago!

Yes, scared money rushes into gold — but then it can rush out just as quickly. “With the stock market plummeting,” explains our macro maven Jim Rickards, “hedge funds and other institutional investors had to suddenly raise cash to meet margin calls on their positions in the equity markets. And they had to get the cash from somewhere. Gold is a very liquid asset that can quickly be traded for cash.”

We saw an extreme, drawn-out version of this phenomenon during the Panic of 2008 — gold peaking in the spring near $1,000, correcting hard below $750 in the fall.

But it reclaimed those old highs by late 2009. In the present instance, it will return to $1,685 soon enough on its way higher still. Buy the dip, Jim says.

And now a disturbing thought… What if the sell-off these last couple of days was less about coronavirus and more about the health of the banks?

So muses our investment-banking veteran Nomi Prins. “Why were bank stocks the biggest losers instead of those companies experiencing supply chain disruptions from the virus?”

Sure enough, the bank stocks tumbled nearly 5% yesterday and the day before, while the S&P 500 slipped a more modest 3.5%… 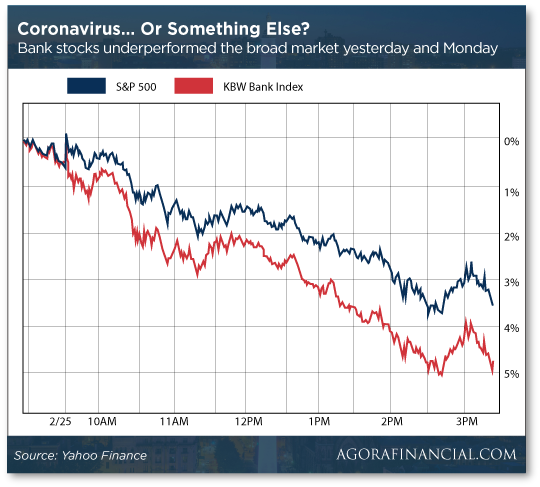 Nomi directs us to an article at the excellent Wall Street on Parade website she says “strongly suggests the problem lies in the banks’ trillions of dollars in derivatives trades. If this sounds familiar, that’s because derivatives were a major cause of the 2008 financial crisis.

“It doesn’t help the big banks that the top two in derivative exposure (JPMorgan Chase and Goldman Sachs) are under criminal investigation by the U.S. Department of Justice for racketeering and embezzlement schemes.”

Nomi says it’s time for Congress to start investigating JPM and GS for their derivative exposure — along with Citi, Bank of America and Morgan Stanley — “before we have a repeat of the financial crisis a decade ago.”

Not that we’re holding our breath, given Congress’s sterling pre-2008 performance…

Not sharing in today’s rally is Virgin Galactic (SPCE) — the only pure play on space tourism.

That’s despite the company announcing it now has almost 8,000 “registrations of interest” for future commercial space flights — more than double the amount only five months ago. The first flight is scheduled for later this year.

But the company registered a loss of $73 million for the most recent quarter. SPCE shares are down 4% on the day.

Still, those shares are up nearly 300% from their December lows. Why the huge run-up?

“Nobody really knows,” says our science-and-wealth maven Ray Blanco… and he had the foresight to get his readers into SPCE before that huge run-up began. Even he didn’t expect a move this big, this fast.

“Everything right now is based on theoretical arguments of what SPCE may become. As of now the company is unprofitable. No tourists have actually gotten into space and the stock has only been public for less than a year.”

Ray says two types of investors drove up the share price — people who understand Virgin Galactic’s potential as a company and “swing traders” who followed them in and chased the price higher.

Right now SPCE is way too volatile for Ray to recommend jumping in. There’s a different kind of space play he has in mind, though — with just as much profit potential as SPCE.

Back to gold for a moment… and an unusual income-producing venture for a large pension fund.

The Ontario Teachers’ Pension Plan in Canada has struck a deal with a miner called New Gold Inc. (NGD). The pension plan is putting up $300 million — in exchange for a chunk of the free cash flow generated by New Gold’s flagship mine in British Columbia.

As Bloomberg News reports, “New Gold will sell a 46% free cash flow interest from its New Afton mine over four years. After the term ends, Teachers’ has the option to convert it into a 46% joint venture interest in the British Columbia mine, while New Gold retains an ‘overriding’ right to buy back the stake under certain conditions.”

For New Gold, it’s a needed cash infusion. For the pension fund, it’s diversification. “Lower-for-longer interest rates have pushed pension funds to cast their nets far and wide in search for returns,” says Bloomberg, “amid a slew of geopolitical risks and trade tensions.”

We stay in Ontario for a “government in action” story, Canadian style.

Canada’s largest province, encompassing more than a third of the country’s population, rolled out new license plates this month. Spiffy new blue design… although some people noticed an eerie resemblance… 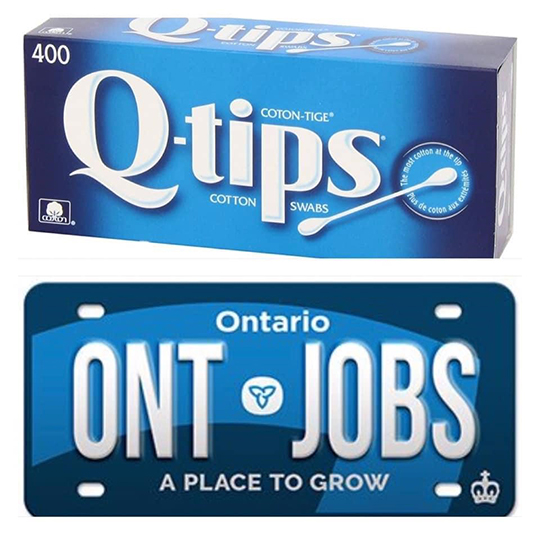 But there’s a bigger problem, it seems — the letters are impossible to read at night. A police officer in the eastern city of Kingston was the first to notice… 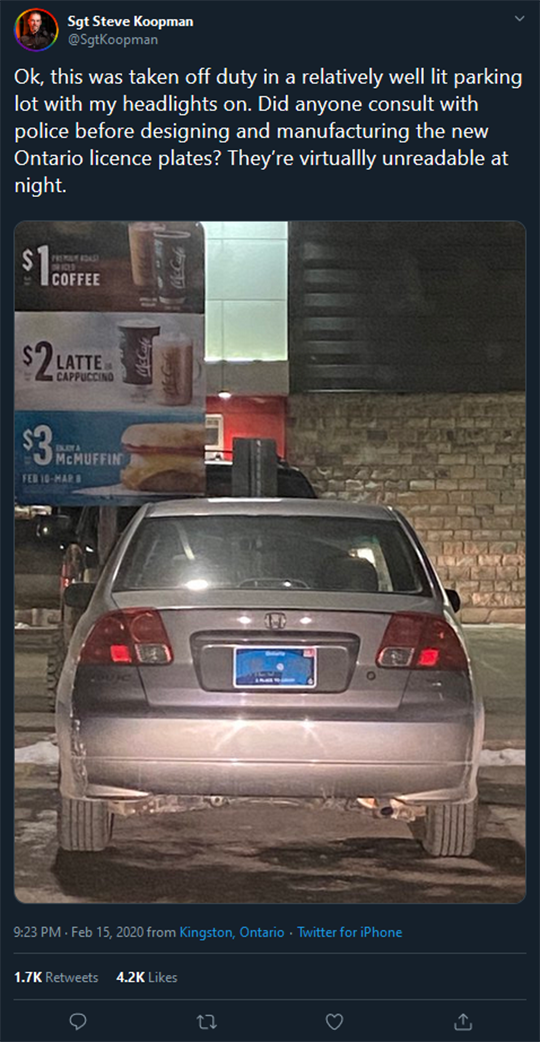 The question answers itself.

And so began a hilarious round of finger-pointing and butt-covering involving… oh, let’s see, there’s 3M’s Canadian unit, which is the manufacturer… and there’s Ontario Premier Doug Ford, brother of Toronto’s late crack-smoking mayor Rob Ford (and who previously botched the rollout of legal cannabis in Ontario)… and there are opposition lawmakers who complained the color scheme was too close to that of Ford’s Progressive Conservative Party in the first place.

The government says 3M is working on an “enhanced license plate” that should be available in three more weeks.

Until then, they’re a desirable commodity in part because they also can’t be read by toll-road cameras. As one wag tweeted, “Got to get me those new Ontario license plates so I can drive on the 407 for free.”

Back to coronavirus in the mailbag: “On Monday you quoted writers Lanard and Sandman recommending readers get an extra couple months’ supply of prescription medicines.

“Hah, fat chance. No. 1, very often you can’t refill some prescriptions even one day early. Government rules, you know. Getting extras is out of the question. And No. 2, many folks can barely afford their allotted amount and could never raise the upfront cash for extra refills at today’s prices.

“I get the sense that L. and S. are healthy and don’t need prescriptions. They need to visit the real world before making unrealistic recommendations.”

The 5: All valid points.

If you can scrape together the money, you can sometimes get away with the excuse that you need the extra supply for an extended trip.

Well, as long as you don’t say your travel plans include China, South Korea or Italy…

P.S. Want to hear about a trading strategy that works regardless of the market’s ups and downs?

Then you’ll want to check this out right away. And we do mean right away; the link goes dead as soon as the market opens tomorrow morning at 9:30 a.m. EST.