Somehow, the following story from the world of artificial intelligence feels like a bigger long-term problem than coronavirus.

From The Hill: “Clearview AI, a tech startup that has compiled billions of photos for facial recognition software, announced Wednesday that it had lost its entire client list to a data breach.”

Over time, Clearview has scraped more than 3 billion photos from social media and other websites; it has contracts with many law enforcement agencies. You can see how this might become a problem.

But company attorney Tor Ekeland seems awfully cavalier about the whole thing: “Unfortunately, data breaches are part of life in the 21st century,” he tells The Daily Beast. “Our servers were never accessed. We patched the flaw, and continue to work to strengthen our security.”

Translation: “Nothing that happened here is gonna get us sued, so it’s all good.”

“The Internal Revenue Service is designing machine-built graphs to plot the relationships among participants in business deals, giving auditors a new tool to analyze transactions and detect tax avoidance.”

Nor is that all: “The agency is using artificial intelligence to study notes that agency employees take when fielding questions from taxpayers and testing which combinations of formal notices and contacts are most likely to get a taxpayer who owes money to send a check.”

And the article tells us the IRS relies on the data-mining federal contractor Palantir Technologies to pinpoint fraud cases. “If I get a first name and a cellphone number, you’d be shocked how much information Palantir can provide,” says IRS Commissioner Charles Rettig.

[Reminder: Palantir’s co-founder and chairman is Peter Thiel. Just in case you still believed Thiel is some sort of “libertarian” icon. Dude’s as deep state as they get…]

Then again, two can play that game: “Tax preparers and accounting firms are turning to the same tools to keep tax bills as small as possible,” says the Journal.

“The Big Four accounting firms all have specialists trying to use artificial intelligence to guide the advice they give clients.”

Still, the tax code is so insanely complex that only humans are capable of studying the nuances and figuring out which tax-avoidance steps are totally legal… and which might throw up a huge red flag.

Inside this year’s edition, you’ll learn about…

If you’ve filed already, you might want to prepare an amended return; that’s how valuable these tips and tricks are. Robert shows you how to claim your copy of the Rich Dad 2020 Tax Guidewhen you click here. (No long video to watch, either.)

To the markets and what might be the most inspired IPO announcement ever. Shortly after the open came word the food-delivery outfit DoorDash is aiming to go public as early as this spring.

“Though plunging stocks right now make markets inhospitable for new issues,” says The Wall Street Journal, “the company and its underwriters at Goldman Sachs Group Inc. hope that the volatility will have passed by then.”

Are you kidding? A coronavirus pandemic could be the best thing to happen to DoorDash. If people become skittish about going out to restaurants, they’ll gravitate toward delivery.

In China, even locked-down Wuhan still has legions of delivery drivers on duty — braving the risk of infection while taking every possible precaution. “Once a ubiquitous but invisible presence on the streets of nearly every Chinese city, the drivers are now being heralded as heroes,” says a recent New York Times dispatch.

Even if the virus fizzles out, DoorDash still wins as it attracts billions in new capital on the theory things will get worse. We’re a little awed by the brilliance of the whole thing…

Elsewhere, though, it’s another sea of deep red.

At last check the Dow and the S&P 500 are down a little less than 2%, the Nasdaq a little more than 2%. In addition to all the other coronavirus headlines, Microsoft is the latest of the MAGA stocks to warn that the virus is disrupting its Chinese supply chain. MSFT is down nearly 3% on the day. (And it’s holding up best among the MAGA group since the sell-off began a week ago.)

Among other big movers we see Virgin Galactic, mentioned here just yesterday, down 25% on the day. The higher they climb, the harder they fall…

This morning the financial media have latched onto the narrative that the major indexes are whisker-close to “correction” territory — meaning a 10% drop from their most recent peak.

Nothing wrong with that, says our chart-watcher Greg Guenthner. “Given the sheer scale of the rally in the stock market over the last year or so, we’ve been overdue for a correction.”

That makes sense just eyeballing a chart of the S&P 500’s rally that began right after Christmas 2018. The big run-up starting last October was getting too far over its skis. A correction is a healthy thing for a long-term bull market… 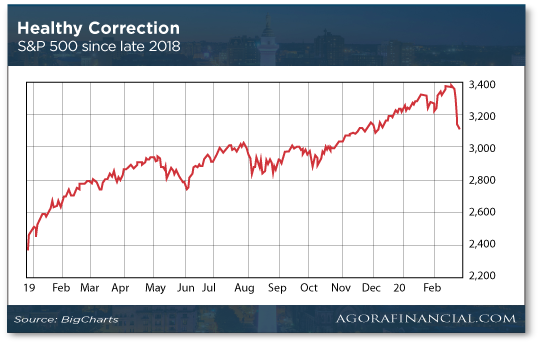 Gold, meanwhile, has caught a bid… but it’s still struggling to hold onto the $1,650 level. Treasury rates are plumbing new record lows, the 10-year a little over 1.28%. Crude is getting absolutely clobbered — down almost 4% today to lows last seen in early 2019, under $47.

In the “alternative explanations for this week’s sell-off” contest we have another entrant — Bernie Sanders.

Yesterday we described how the bank stocks might be dragging down the market as a whole — possibly because of renewed worries over the banks’ derivatives exposure.

But there’s also the Bernie factor. Sanders won convincingly in the Nevada caucuses on Saturday. The Dow tanked 1,000 points on Monday. Our Jim Rickards, master of “complexity theory,” saw a connection right away… 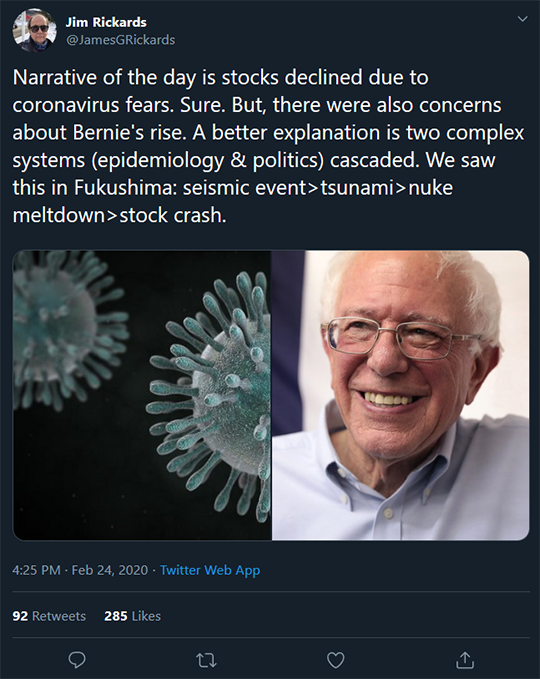 “If this stock market reversal is due exclusively to the virus, then why is UnitedHealthcare down far more than [the S&P 500]?” he asked. “Why is health care as a sector broadly not outperforming? Answer to these questions: The market is digesting a better than 50% chance of Bernie getting the nomination.”

Could be. Makes as much sense as anything else.

We’ve been scribbling down a few 5-ish thoughts of our own about Bernie this week. Assuming virus headlines don’t get in the way, we’ll share them tomorrow. (We’d really like to squeeze them in before Super Tuesday.)

There’s something to be said for brand loyalty. Check out this trio of protesters’ demands… 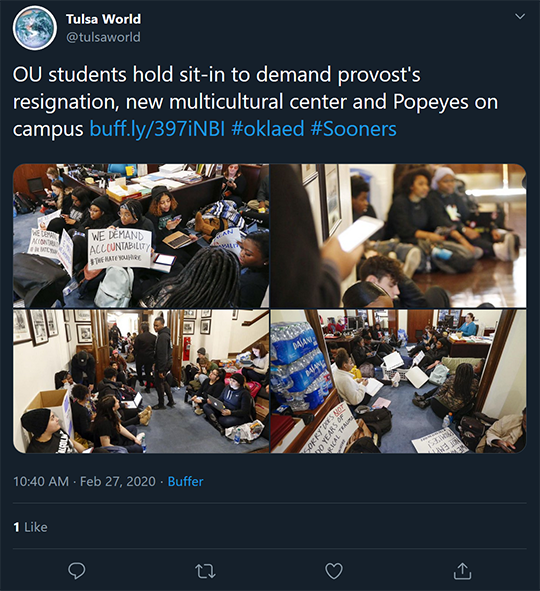 For real. “Following two controversial incidents of professors using a racial slur while teaching, dozens of University of Oklahoma students staged a sit-in Wednesday outside the OU’s president’s office,” reports The Oklahoman.

In addition to the resignation of OU Provost Kyle Harper, “Demands from the group also include a semester-long class focused on diversity, and a new multicultural center that will feature meeting spaces for marginalized students, common areas, study rooms and a Popeyes restaurant.”

Popeyes, if you’re curious, was taken over in 2017 by Restaurant Brands International (QSR) — a company formed a couple years earlier with the merger of Burger King and Tim Hortons…

“Well, very unfortunately, my virus suspicions mentioned in the Feb 12 episode of The 5 seem to be coming true,” writes a longtime reader.

“Said another way, the facts are starting to line up more and more with the actions — that this is far worse than was initially, and still, being let on.

“I’ve now seen reports that China was pumping out papers on how to handle infectious viruses made in their military labs in Wuhan — concurrent with the early days of the outbreak. Exactly what I would expect, an attempt at after-the-fact butt-covering.

“I’ll just leave this little video from Johns Hopkins (October 2019), which speaks for itself. ‘Event 201, hosted by the Johns Hopkins Center for Health Security, envisions a fast-spreading coronavirus with a devastating impact’

“Skip to the 10:05 mark for just the chilling highlights, which match with amazing accuracy what is currently happening at this stage, including comments about needing a ‘Marshall Plan’ and scrubbing social media of what they determine is fake news, or even shutting down the internet.

“Or if you need some levity after watching the end, start from 1:07 and see the doctor that looks like Mark Zuckerberg. (I’m channeling Pete Buttigieg, I mean Alfred E. Neuman. What? Me worry?)

“Gotta go so I can watch Trump’s news conference on the corona.”

“Big Tech has already kowtowed to censorship pressure in the past (and has shaped its software to fit its own internal biases), and there’s little indication, in the midst of the chaos, these companies won’t do it on a massive scale.”

“So glad to see Ontario Premier Ford's name garnering some attention south of the border courtesy of The 5,” writes a Canadian reader.

“As a lifelong Toronto resident, I am but one of many Ontario residents subjected to years of ‘Ford family foibles.’ The provincial government's license plate misstep is just the latest in a long string of Ford's unforced errors, incinerating his sparse political capital.

“Including as follows: arbitrarily reducing Toronto's city council by half in the midst of a municipal election, cutting funding to families of autistic children, attempting to hire his fishing buddy as the new provincial chief of police, implementing a mandatory gas pump propaganda sticker to exaggerate the impact of the federal government's carbon tax and cuts to education resulting in endless rotating teacher's strikes.

“While Ford's new 'Tory blue,' street racer-approved, invisible-in-the-dark license plates may be impractical for Ontario drivers, they are perfect for the clown car known as the Doug Ford Progressive Conservatives.”

The 5: At the risk of sounding like an igmo American, what’s with “Progressive Conservative”?

I mean, I know the national right-leaning party went by that moniker for several decades, but isn’t that like “vegan carnivore”? Or “opulent poverty”? Or “promiscuous abstinence”?

But then again, y’all have restaurant chains up there that sound like an old SCTV sketch. Extreme Pita? Croissant Plus?

“The number of tax refunds issued so far this tax season is down almost 5% compared with last year,” Bloomberg reports, “an indication that many Americans didn’t withhold enough from their paychecks and could face bills from the IRS.”

Yeah, and it all shook out by the time tax season was over.

Maybe we’ll address this non-issue again sometime next week. Until then, we urge you to get back every penny that belongs to you — with the help of the Rich Dad 2020 Tax Guide.

Just one of the 91 pointers in this book could be worth thousands to you. And you can claim your copy right now when you follow this link.