Lies My Media Told Me (The Virus and the Markets)

We begin with some desperately needed comic relief, scraped from a random message board… 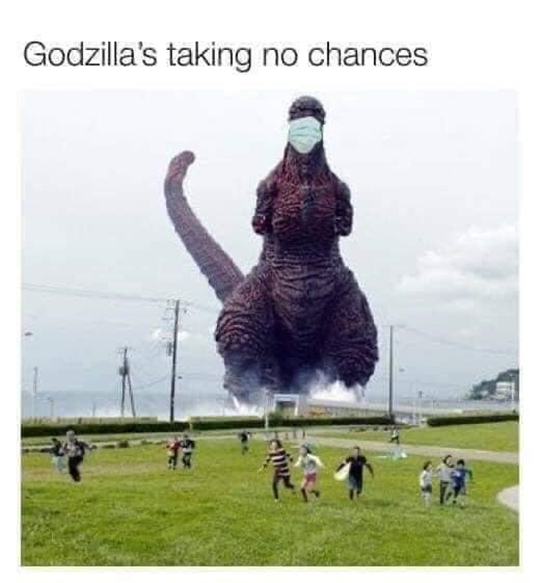 Usually when the bears go marauding, Godzilla-like, through the stock market… we do our best to peel the onion and make sense of it all in a way the mainstream can’t. The 5 has been around since 2007. We’ve been through the Panic of 2008 and every lesser scare since.

But this lesser scare feels different somehow. For much of this week we couldn’t put our finger on it. As the week mercifully begins to wind down (but with the Dow dropping another 800 points on the open)… we think we’ve figured it out.

The amount of warp-speed noise, misinformation and disinformation surrounding the coronavirus outbreak and its market impact is… well, the dictionary fails us.

Watching Chinese state TV recount the infection numbers, we’re reminded of an era gone by when Soviet state media would wax on endlessly about their “glorious” grain production figures… 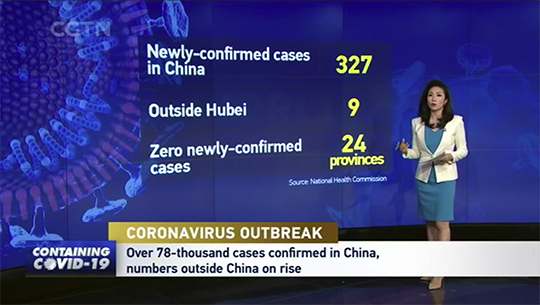 How believable is any of it?

Not that Big Media in this country is any more reliable. After the close yesterday, everyone breathlessly described how the Dow just registered its BIGGEST POINT DROP EVER — neglecting to note that in percentage terms, yesterday doesn’t even make the top 20.

Don’t let the facts get in the way of a good story, right?

Oh, and let’s not forget this, as shown on everyone’s favorite “alternative” financial website after the close…

The rumor originated with a Bloomberg News reporter [hmmm…] who somehow construed a scheduled, routine White House event marking Black History Month as being the occasion for an “impromptu press conference” to address the market plunge. And even that didn’t come to pass.

There’s delicious irony in seeing Zero Hedge getting punked by the mainstream, especially by the one financial outlet whose commitment to accuracy and fairness is most in question at the moment.

And when that uncertainty is made worse by a blizzard of noise that overwhelms the synapses… who can blame anyone for mashing the “sell” button?

Speaking of noise, the World Health Organization just declared coronavirus poses a “very high” global risk — but still can’t bring itself to say “pandemic.” And with that, the Dow is down a clean 1,000 points on the day. Again.

Let’s tote the damage as of midmorning…

In the rush for liquidity to meet margin calls — we warned you about this on Wednesday — gold is getting just smashed. The bid is down nearly $60 as we write, to $1,584. Still, that’s no worse than it was only 10 days ago.

The only safe haven, as it’s been the last few days, is in Treasuries. Prices are again touching record highs, pushing yields to record lows. The 10-year note is now 1.173%.

Hey, at least it’s a good time to refinance your mortgage, seeing as mortgage rates are tied to the 10-year. Of course, that’s assuming the banks are still willing to lend…

A few days ago, as the market was still near all-time highs, I was trading emails with our chart hound Greg Guenthner. I asked him, “How far can the S&P 500 fall and we can still say, ‘The bull market remains intact’?”

Now, there’s a whole lot of nuance to answering that question — like when did the “bull market” even begin. But let’s say it began 11 years ago when the S&P bottomed at the infamous 666 level.

Here’s a “raw” chart from StockCharts that Greg shared with me this morning. You don’t need to see the numbers to get the gist; he just drew a blue line under each of the market bottoms since March 2009. As you can see, they came in mid-2010, mid-2011, early 2016 and late 2018. Note the big red candlestick on the right end of the chart where we are now…

In addition, 2,800 is, give or take, the threshold for a 20% drop from the most recent peak — which is the conventional definition of a “bear market.”

The “Plunge Protection Team” — strictly speaking, the chair of the Federal Reserve, the Treasury secretary and the commissioners of the SEC and CFTC — have made certain not to let that happen since the Panic of 2008.

So go figure: To prop up stocks, there’s now a 100% probability the Federal Reserve will cut interest rates at its next meeting on March 18.

Looking further down the line, there’s even an 8% probability we’ll be back to near-zero interest rates by year-end. Heh…

Don’t say we didn’t warn you: As rough as this week’s been for the broad stock market, it’s been worse for the MAGA stocks.

Back on Feb. 12, we told you how the four biggest companies in the market — Microsoft, Apple, Google and Amazon — accounted for two-thirds of the S&P 500’s gains year to date.

Of course, those year-to-date gains have turned to losses now, but check this out: All four of those companies have taken a worse hit than the S&P (which is the black line on this chart)… 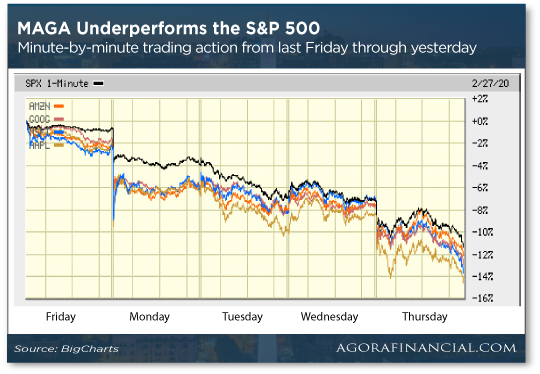 We’ve fretted now and then about this possibility for years. More and more investors have been adopting “passive” strategies — in other words, plowing money into index funds instead of picking individual stocks.

If you keep doing that every two weeks… and if millions of others like you do the same thing… you see how the biggest companies just keep getting bigger, regardless of their sales or profits.

But when the stock market starts turning south, the process feeds on itself in reverse. Selling begets more selling. That’s been the story of the last five trading days.

But if the Plunge Protection Team can’t work its magic, we’re back to a dot-com scenario — when it was Intel, Cisco, Dell and Microsoft leading the way both up… and down. Just sayin’.

From the “Never let a crisis go to waste” department… we see coronavirus is just the excuse the deep state needs to consolidate its power. 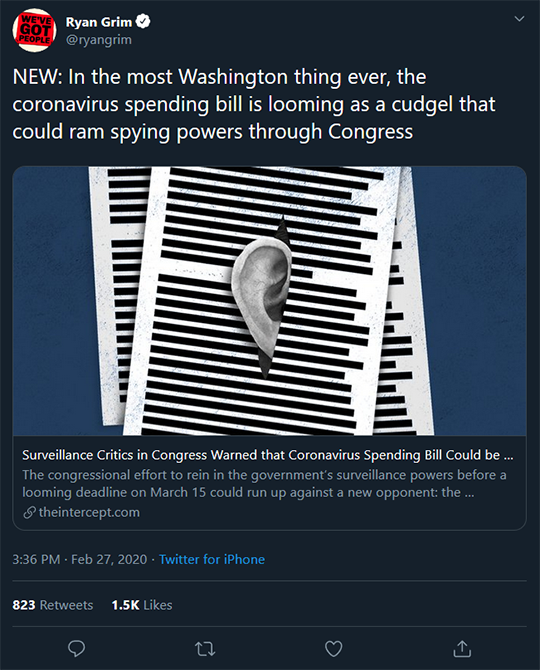 A key provision of the Patriot Act is up for renewal in mid-March — one that gives the feds a way to scoop up American citizens’ phone records from the telecom companies if they wish. In recent weeks, a coalition of civil liberties-minded liberals and Constitution-minded conservatives worked up an amended bill that would curb the feds’ snooping authority.

But now it appears House Speaker Nancy Pelosi and Intelligence Committee Chairman Adam Schiff will join forces with Senate Republican leaders to scuttle that bill — using the outbreak as cover.

Explains Ryan Grim at The Intercept: “The Trump administration’s request for $2.5 billion to mitigate the coronavirus pandemic is likely to become an unstoppable legislative vehicle — as must-pass legislation that congressional leaders of both parties could use to ram through a reauthorization of the FBI’s call detail records program.”

“Pelosi and Schiff will never allow it to expire,” a Democrat on the House Judiciary Committee tells Grim.

“Wait, what? The hell you say?” writes one of our regulars — after Nomi Prins suggested a contributing factor to the market dump this week is revived concerns about big banks’ derivative exposure.

“I thought our banks were strong. I’ve heard they’re also well-capitalized and stress-tested, as well as too big to fail (whatever that means).

“High-ranking people in the Treasury Department and Federal Reserve are quoted regularly in the mainstream media telling us these things. They wouldn’t fib to us!

“Here’s to the health of the banks. They must know what they’re doing…”

The 5: Coincidentally or not, JPMorgan Chase CEO Jamie Dimon decided this was the week to announce his firm would start seeking loans from the Fed’s discount window.

As you might know, there’s a stigma that comes with borrowing from the discount window. In the past, taking that step suggests there’s not enough liquidity for the very basic business of meeting depositors’ requests for withdrawals.

From The Wall Street Journal: “‘We think it’s time,’ Dimon said. ‘We think it’s a good idea and will help remove the stigma.’ He said the bank and its regulators have discussed how and when it might appropriately borrow from the window and hopes other big banks follow suit.”

Disturbing as that is on its own, get this: Typically, the only collateral allowed for discount-window loans are government-guaranteed securities… and Dimon made clear to the Reuters newswire about wanting to borrow against “a range of securities and loans.”

Makes you wonder about Dimon’s “fortress balance sheet,” no?

P.S. From a reader: “Not getting The 5 in my inbox (again for some reason) — can you please fix this? Thanks.”

We’re working on it. The filtering issues that cropped up in mid-December still plague us. Fortunately, we can report some incremental progress in the sense that the problem has ceased getting worse… but yes, fixing this is turning out to be a marathon, not a sprint.

Until we cross the finish line, please bookmark The 5’s archive page. Each day’s episode is posted there within minutes of being emailed midafternoon on the East Coast.