Late during the coronavirus meltdown last week, rumor abounded that the world’s major central banks would launch some sort of “global coordinated action” over the weekend to rescue the markets — something on the scale of what was done during the crisis with government debt in Greece and the other “PIIGS” countries in 2011. 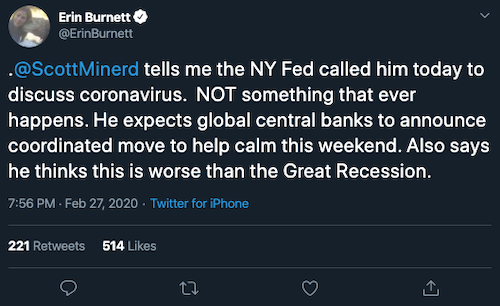 We have special contempt for Ms. Burnett around here. Among other offenses: One night after Superstorm Sandy blew up the East Coast in 2012, she was among a bunch of CNN talking heads breathlessly repeating internet rumors that the floor of the New York Stock Exchange was under three feet of water… 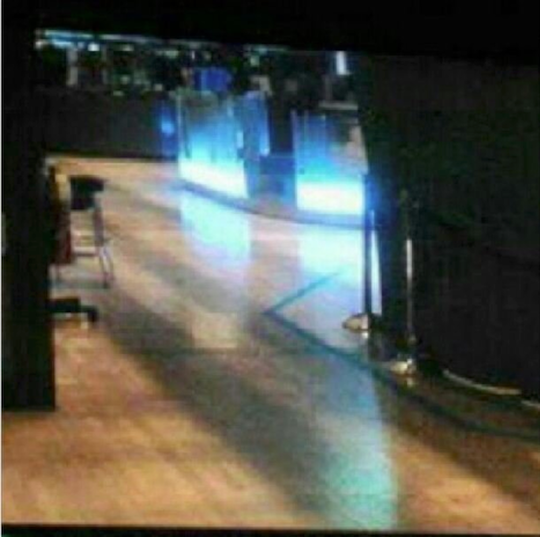 … when just looking at a live cam of the floor revealed it was bone-dry.

Meanwhile, on the lecture circuit, former Federal Reserve chair Janet Yellen has jumped on coronavirus to return to a long-standing theme of hers — that during the next recession, the Fed should prop up markets by buying not only Treasury debt and mortgage-backed securities… but also corporate bonds and even stocks.

But what if the Fed is already buying stocks to prop up markets at critical moments?

A funny thing happened on Friday. Shortly after the lunch hour, Apple and Microsoft suddenly turned a corner — bucking the big sell-off.

That was highly unusual and unexpected, given the chart we showed you on Friday.

As you might recall, during the previous five trading sessions, the MAGA stocks — Microsoft, Apple, Google, Amazon — were losing value even faster than the S&P 500. It was a mirror image of the stock market on the way up in recent years, when the MAGA stocks significantly outperformed the S&P 500.

By the close on Friday, the Dow and the S&P still were solidly in the red… while two of the MAGA stocks were at breakeven and the other two posted respectable gains. 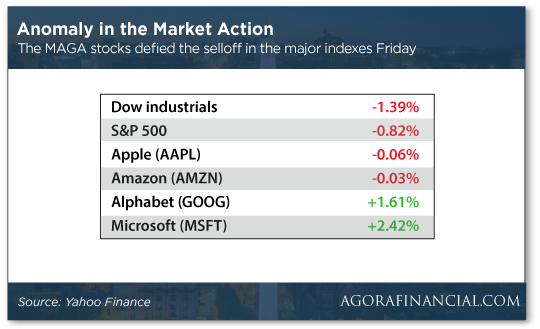 The Microsoft move especially stands out, given how MSFT had warned on Wednesday that manufacturing snags in China would deliver a hit to sales of Windows as well as Surface tablets and laptops.

“I believe the Fed is openly intervening in the stock market on a regular basis,” says Graham Summers.

Mr. Summers joined our team last year. Since the beginning of 2020, he’s been pounding the table about how the Fed is buying stocks… presenting evidence to back up his case… and showing his readers how to ride the Fed’s coattails to massive gains.

We introduce him to you today to help make the case that the rally in the MAGA stocks Friday was made possible by the Fed’s not-so-invisible hand. “Ghost money,” he calls it.

In the first place, the notion of a central bank buying stocks isn’t as far out as you might think.

As we’ve mentioned now and then, the Swiss National Bank and the Bank of Japan have been doing it for years.

For its part, the SNB owns shares in hundreds of U.S. companies. Meanwhile, “as of March 2019,” Graham elaborates, “the BoJ owned 80% of Japan’s ETFs. Yes, 80%. And it is a top-10 shareholder in over 50% of the companies that trade on the Japanese stock market.

“These are not small positions, either. Between the Swiss National Bank and the Bank of Japan alone, we’re talking about over $300 BILLION in stock positions.”

But the Fed? Never has the Fed disclosed stock purchases. That’s why he calls it “ghost money.” How is Graham so certain?

“For years now, I’ve noted that anytime stocks began to break down, ‘someone’ has suddenly intervened to stop the market from cratering,” he tells us. “That someone is the Fed.”

One small example — the morning of Jan. 7. “Stocks opened in a sea of red based on increased tensions between the U.S. and Iran. Then, suddenly, stocks went absolutely vertical around 10 a.m.” 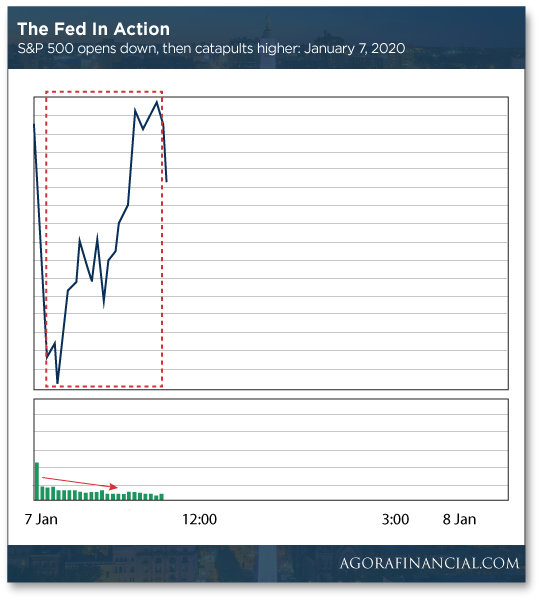 “Who else could this be but the Fed?” Graham asks rhetorically.

To generate these moves, Graham believes the Fed intervenes specifically with four of the five biggest companies based on market cap.

How does the Fed put “ghost money” to work?

“The Financial Times recently reported that according to data from JPMorgan and Lucerne Capital, only 10% of stock market volume comes from actual fundamental stock investors,” Graham explains.

“The other 90% of all market trading today is generated by passive funds/index derivatives. Meaning, 90% of trading comes from automated computer trading programs that buy stocks passively. These programs buy individual stocks or entire stock indexes without thinking.

“Because of this, the Fed knows it only needs a significant percentage of stocks to ratchet higher to get the entire market to rally.”

Reminder: The four biggest stocks accounted for two-thirds of the S&P 500’s gains during the first six weeks of this year. Are you getting the picture now of how that happened?

Maybe the “global coordinated action” this weekend wasn’t necessary because the Fed had already stepped in with “ghost money” on Friday afternoon.

If so, it’s working. As we write this morning, Wall Street is in rally mode. The S&P 500 is up nearly 1.9% and back above the 3,000 level. But Microsoft is up another 3% in addition to its big jump Friday… and Apple is screaming higher, up nearly 6%. Recall that along with Microsoft, Apple was the other giant company that warned about a Chinese hit to revenue.

Over the last year that Graham has noticed the Fed propping up four big stocks with “ghost money,” he’s steadily developed a trading strategy that everyday folks like you can use to piggyback these big moves.

“Already,” he says, “this system has produced gains of:

And now you can have access to these trades in a premium trading advisory he calls, logically enough, Ghost Money Trader.

“Anyone can do this,” Graham says. “And because my system does all the hard work for you, it takes less than 10 minutes to follow.”

Follow this link and Graham will walk you through exactly how these trades work.

After its massive beat-down Friday, gold is clawing and scratching its way back toward the $1,600 level — the bid $1,595 at last check.

And Treasury prices are once again touching record highs, sending yields down to record lows. At last check, the 10-year note is down to 1.09%.

U.S. factory managers aren’t panicking yet about the slowdown in shipments from China.

At least that’s the takeaway from the February ISM manufacturing index, out this morning. It’s down slightly to 50.1 — but still above the 50 dividing line between a growing factory sector and a shrinking one. Given how the index has spent five of the last seven months below 50, that’s a victory.

Similar measures from China, however, are disastrous. The official government number collapsed to 35.7. And a private survey registered a record low of 40.3.

We’re a hair tardy in acknowledging what might be the most inspired IPO announcement ever.

Last Thursday brought word the food-delivery outfit DoorDash is aiming to go public as early as this spring.

“Though plunging stocks right now make markets inhospitable for new issues,” said The Wall Street Journal, “the company and its underwriters at Goldman Sachs Group Inc. hope that the volatility will have passed by then.”

Are you kidding? A coronavirus pandemic could be the best thing to happen to DoorDash. If people become skittish about going out to restaurants, they’ll gravitate toward delivery.

In China, even locked-down Wuhan still has legions of delivery drivers on duty — braving the risk of infection while taking every possible precaution. “Once a ubiquitous but invisible presence on the streets of nearly every Chinese city, the drivers are now being heralded as heroes,” says a recent New York Times dispatch.

Even if the virus fizzles out, DoorDash still wins as it attracts billions in new capital on the theory things will get worse. We’re a little awed by the brilliance of the whole thing…

“So glad to see Ontario Premier Ford’s name garnering some attention south of the border courtesy of The 5,” writes a Canadian reader after a quirky item we had last week.

“As a lifelong Toronto resident, I am but one of many Ontario residents subjected to years of ‘Ford family foibles.’ The provincial government’s license plate misstep is just the latest in a long string of Ford’s unforced errors, incinerating his sparse political capital.

“Including as follows: arbitrarily reducing Toronto’s city council by half in the midst of a municipal election, cutting funding to families of autistic children, attempting to hire his fishing buddy as the new provincial chief of police, implementing a mandatory gas pump propaganda sticker to exaggerate the impact of the federal government’s carbon tax and cuts to education resulting in endless rotating teacher’s strikes.

“While Ford’s new ‘Tory blue,’ street racer-approved, invisible-in-the-dark license plates may be impractical for Ontario drivers, they are perfect for the clown car known as the Doug Ford Progressive Conservatives.”

The 5: At the risk of sounding like an igmo American, what’s with “Progressive Conservative”?

I mean, I know the national right-leaning party went by that moniker for several decades, but isn’t that like “vegan carnivore”? Or “opulent poverty”? Or “promiscuous abstinence”?

But then again, y’all have restaurant chains up there that sound like an old SCTV sketch. Extreme Pita? Croissant Plus?

P.S. Our marketing folk recently shut down a campaign for one of our hottest new services, Ghost Money Trader (referenced above today).

They’d imposed a deadline of this last Saturday.

But after analyzing the action in Apple, Microsoft and a couple of the other big tech names on Friday… I begged and pleaded for them to reopen the campaign. We very likely witnessed the Fed’s “ghost money” in action on Friday afternoon… and continuing into today. It would be criminal for us not to offer you access to these trades.

So the campaign is once again open. Click here and Graham Summers will show you how the Fed deploys “ghost money” into the stock market… and how you can piggyback that action for huge gains in as little as two hours.

You can watch his full exposé at this link. Do it now, because while I can twist the marketing folks’ arms for a little while I can’t guarantee how long they’ll keep the page open.